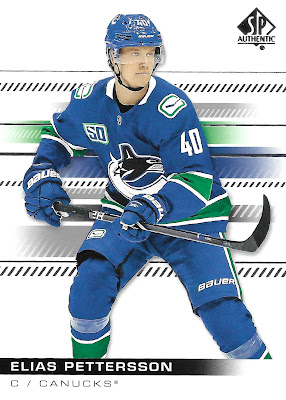 SP Authentic has long been one of the most popular and liked products for hockey collectors. It's clean design, on-card autographs, and potential for amazing hits is second to none. This year, SPA continues the tradition with a release that brings collectors exactly what they expect. It's easy to see that Upper Deck will move a lot of this product to eager collectors wanting to open up as many packs and boxes as they can.

Product Thoughts
The base design of SPA is the same mostly white aesthetic that Upper Deck has riffed on for years and years and years. The background on this year's base is a bit busier than I personally like, but it's not offensive. The design actually reminds me of SPA sets from the '00s for some reason. Everything on the face of the card is clean. Upper Deck is wise to continue this design forward - as they say: if it ain't broke... don't fix it! 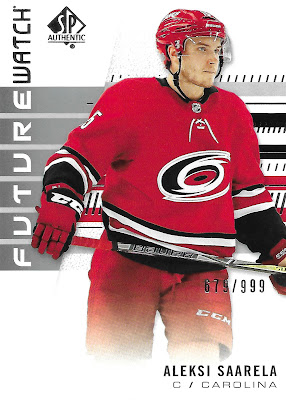 The main chase for most people will be the Future Watch Autographed rookie cards. SPA's main claim to fame are these popular rookies. The Aleksi Saarela shown above isn't autographed, but the majority of them are. Each box of SPA comes with one autographed FWA. The one I received, Joel Farabee, was a redemption. FWA's are second only in desirability to rookie cards from The Cup. FWAs are favorite of many and lots of collectors go for a complete set. Attaining a complete set is extremely challenging. Since you only get one guaranteed a box, the best way to go after the cards you need would be to purchase them on the secondary market. I completed 2 SPA FWA sets this way. 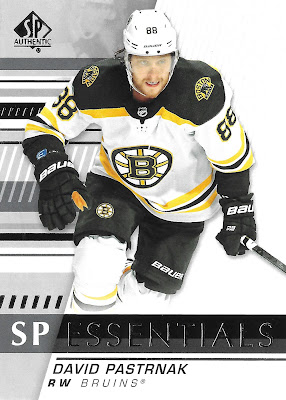 SPA has gotten a bit cluttered in recent years with insert cards. It used to be that there were SP Essentials as a subset, but now there are more parallels and cards with different designs. These cards add variety to the set, but it was nice when SPA was a dead simple product. Of course, that meant opening pack after pack of base cards... so I guess having these to mix up the look helps break the monotony of the cards. 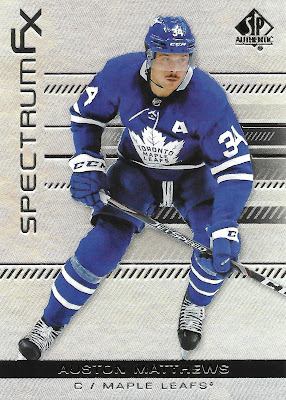 With this release, collectors will find all sorts of interesting and different looking cards. The SpectrumFX cards are shiny and pop out of the pack. Collectors can go for bounties where they can get their hands on limited edition Upper Deck cards. I wonder how many collectors actually go for bounties as I have not seen much excitement for them. The bounties seem a bit difficult to pull of and an expensive proposition to complete. 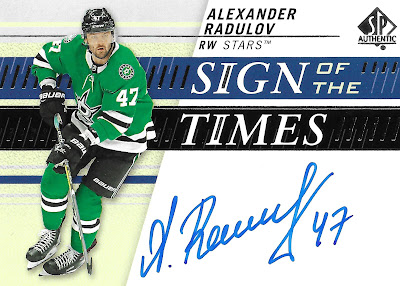 Aside from the Future Watch Autograph, collectors will find a random assortment of other signature cards in the product. The Sign of the Times autographed cards are a staple of the set. One of the intriguing autographed sets in SPA this year are the 09/10 Throwback Future Watch cards. I started collecting again in 09/10 and have that complete Future Watch Auto set. Seeing that design brings back a lot of fond memories! 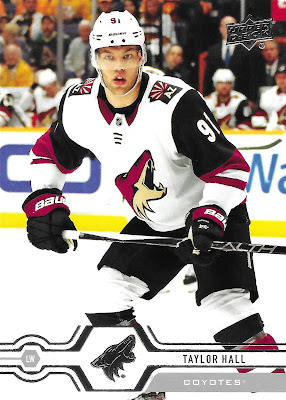 To round things off, Upper Deck has inserted updates to its flagship set within the product. Late season trades and moves as well as Young Gun rookie cards can be found here. Collectors who are lucky can even find exclusive and acetate variations of these cards. Taylor Hall doesn't look right as a Coyote btw.
Positives:
Negatives:
Overall Rating:
9/10
Posted by luke. at 4:05 PM