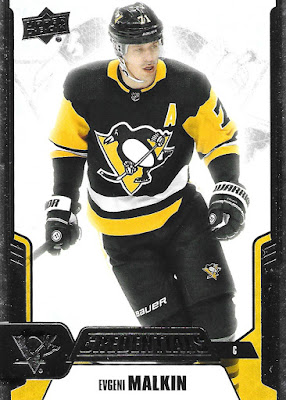 New this year to the table is Upper Deck's Credentials product. Many people have drawn comparisons to Contenders by Panini... and for good reason. There are many similarities between the products in terms of how the cards are designed. Contenders is a fairly popular product still in other sports. Will the concept work for Upper Deck this year? Let's check out a sample box and see!

This set is pretty middle-of-the-road for the most part. The base cards are relatively plain with some shiny foil borders. The overall scheme of the base card doesn't stand out too much though. The white background is clean, but negates the foil effect somewhat. I'm sure parallel foil versions will have a lot more pop than the standard base. As for the look and branding, it's all pretty generic. If Credentials is going to be a long running staple of the Upper Deck line-up, it's going to have to stand out a lot more than it does. 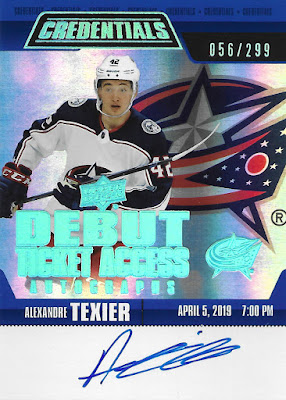 What does stand out in the product are the Debut Ticket Access cards. These cards have lots of foil on them along with serial numbering. These cards are head and shoulders above the look of the base. If you're lucky enough to pull an autographed one, you'll find that the signature is on card - which is a nice touch. The actual debut date of the rookie printed on the front is also a sweet little nugget of information that gives these cards a bit more cred. 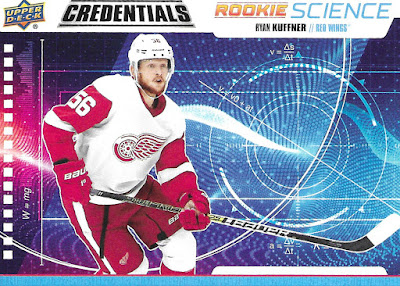 As with most products, there is a heavy focus on rookie card content. The Rookie Science insert is a way to sneak in more rookie cards with a science-y twist. The back will have you back in science class learning all sorts of equations. It's a unique insert that I find to be a fun inclusion in this set. In terms of the look, it's not my favorite, but the concept is a new one for UD. If you happen to get an autographed version of this insert, it'll be a sticker auto. 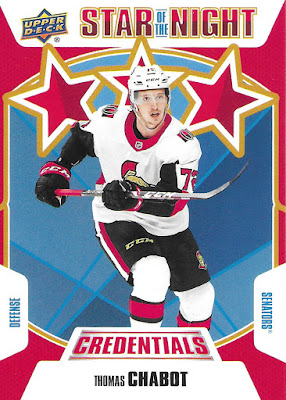 I've got to give credit to Credentials for really making the set fit in with NHL games. The Rookie Science inserts take the physics of the game and put it on the card, and the Star of the Night inserts highlight the end of the game when the stars are announced. Very different aspects of a night of hockey, but both a large part of the game experience. If you happen to pull a few of these, notice that the number of stars on the card correspond to how many stars the player received on that given night! 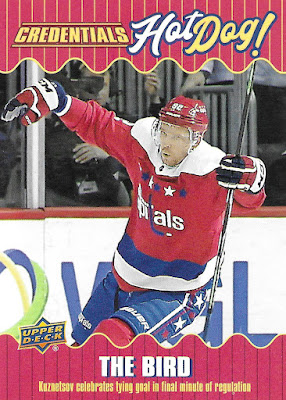 A few unannounced inserts surprise collectors here in Credentials. These short prints have a fun look to them and celebrate some of the more fun aspects of on the ice action. The design here is good, but if the top and bottom portion had some sort of a textured feel, I think it would have been even better. Also be on the lookout for a colorful characters of the NHL surprise insert as well! 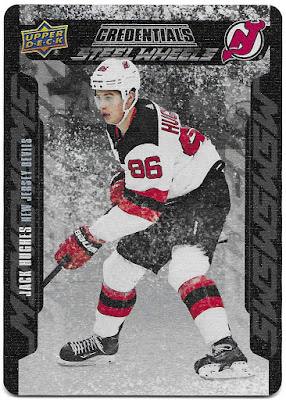 The insert card that stands out the most to me in the set are the Steel Wheel cards that are made entirely of metal. I could totally tell that this card was in the pack as the pack had absolute no bend to it. It's a nice card to have, but without numbering or an autograph, it makes me wonder how high the ceiling is for the standard version of these metallic cards.