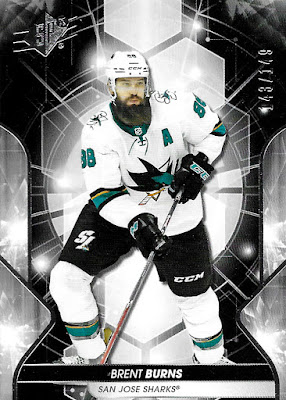 What's a 'budget high-end' product? I guess you could call SPx just that as a box of it costs about the same as a mid-tier product. The only catch is that there are only 4 cards per box with just ONE CARD IN EACH PACK! Only Upper Deck could think of something like this! They also claim that each pack is a hit, but Upper Deck counts numbered cards and inserts as 'hits' so their definition is a bit different than the average collector's definition of a hit.

SPx is a strange product and is configured in a strange way. This product could have easily come in a small box with one 4-card thick pack, but they chose to go with four actual packs with only one card per pack. I guess this does give collectors and hobby retailers that want to sell packs an option to distribute the cards that way, but I don't think there are too many folks opening this product by the pack. Most likely, a collector will just buy a box and rip the entire thing. 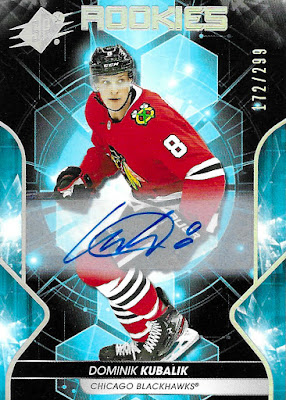 With only four cards, you're not getting a whole lot. Typically a box of SPx will include a base card and some other SPx cards. My particular box came with 2 SPx branded cards as well as 2 UD Black cards. The SPx cards didn't impress me too much. The cards have a busy looking background, but the cards lack the glitz and glam that SPx was known for in the past. The SPx cards come off a pretty flat for a brand that should really be more in your face with its design. My autographed rookie card came with a sticker autograph - which is always a bummer for a 'higher-end' product. 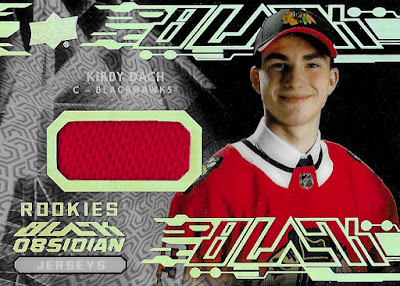 The UD Black cards in the box were much more impressive looking than the SPx cards. The foil on the UD Black cards is shiny and makes the card pop. Even though the Kirby Dach I pulled only contained a plain jersey piece, the rest of the card is designed so well that it kind of makes up for it. The Dach card is a very good looking card and actually elevates the typical boring jersey card that you find in so many products. 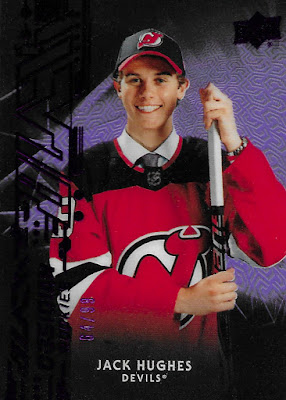 The Jack Hughes rookie I pulled was also a very sweet looking card. The UD Black cards stand shoulders above the SPx cards just in their design alone. I would have been thrilled if the Hughes had an autograph on it, but I can live with a very sweet looking numbered card of the number one pick. Here's to Jack turning it around and lighting the NHL on fire soon!

If I'm buying any more SPx, it's really for the UD Black cards. I think they should have done UD Black with the SPx cards as a bonus!