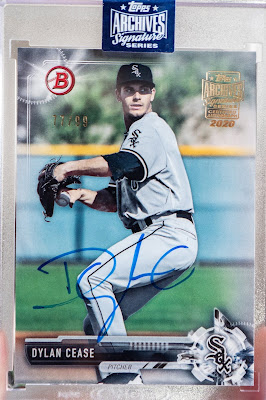 It's curious that Topps has released their version of 2020 Archives already! I feel like it wasn't too long ago that I was purchasing the 2019 version of this brand. But that's the way it is, Topps has released Archvies Active Player Edition to the masses. Similarly to the 2019 release, this product feels as if there are just too many players that you wouldn't be too excited to pull.

Product Thoughts
Some people really don't like these sort of one-per-pack buyback products. I'm in the camp that likes them if they are done the right way. If I am able to pull a player's autograph on an older card that I have a bit of nostalgia for... I'm all for it! The cards in 2020 Archives seem as though they were released not too long ago. Being the Active Player Edition, the cards really can't be that old so I don't get the retro feels I want from a buyback product.

Sadly, the worst thing about this release is the amount of players in it that aren't desirable. I pulled a Dylan Cease card. Let's just say I'm none too happy about it. If you take a look at the checklist for this set, you'll find name after name that doesn't have any real value. For the price of this product, which is about fifty bucks, you can probably find some of these cards on the secondary market for ten or less.

Getting big named players is possible, but they seem to be very difficult pulls. I've watch a good amount of case breaks and finding the big names are very few and far between. In fact, many of the cases I've seen opened just contain the same players over and over again. Because of this, I was heavily considering skipping this product. I only went in on it because the store didn't have something else that I wanted in stock at the time.

Sadly, I can't recommend purchasing 2020 Topps Archives Active Player Edition. As it's brand new, the price is just too high. 2019 Archives prices took a big plunge a few months after they came out and that's probably what will happen to this release. If you really want some, it's probably a good idea just to sit and wait until that price falls.