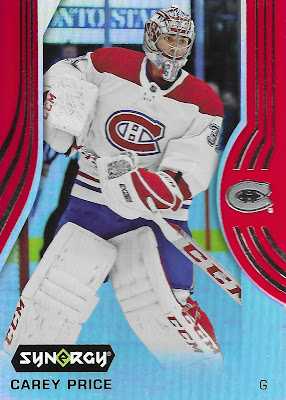 I'm a bit late to the party when it comes to reviewing this year's Synergy, but I've finally got my hands on some! Synergy is a relatively new brand for Upper Deck. It brings together foil and acetate with plenty of rookies sprinkled within. Boxes are well under the one hundred dollar mark, but there are only 24 cards contained in the 8 packs that are contained within.

Synergy is an interesting product in terms of design. The base cards fuse together (or synergize) different trading card materials. These cards feature foilboard with colored acetate borders. It's a unique combination, but in my opinion doesn't make for a great card. It's not that the cards are ugly, they just don't inspire me to buy them. According to the checklist, the base cards are actually quite rare. Most of the cards you find when you buy Synergy are the parallel cards. The red parallels are the most common, but getting the best rookies in this color are still pretty difficult as they have odds that are 1:80. 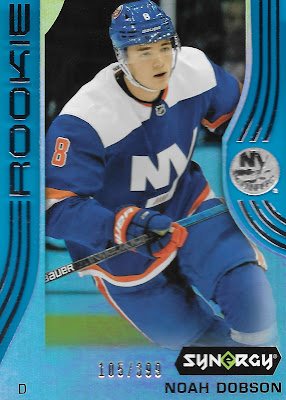 There are lots of rookies to be found in Synergy. The base rookie cards have a rookie designation on the left border of the card. Typically the rookies share the same border as the base cards, but you can find serial numbered versions like this Noah Dobson shown above. Collectors will have a tough time pulling the best rookies out of Synergy as Upper Deck has really made them rare pulls out of packs. I was hankering for a Cale Makar, but he was no where to be found! 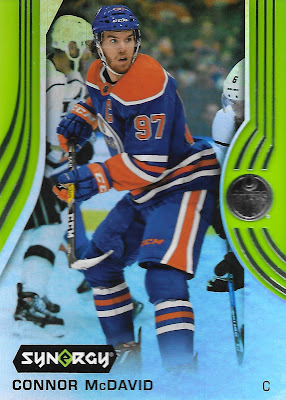 It's interesting how Upper Deck made the base set so rare and difficult to obtain. The highest serial numbered base card is 20. The All-Star base cards have the lowest print run - they are numbered to just 9. So I guess there are only 9 people who could possibly make a true base set of Synergy if they wanted to. I wonder how many collectors know how truly rare the base set of Synergy is! 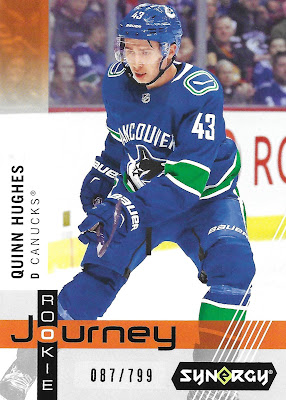 To me, Synergy is just a totally backwards set. The base cards are rare and the parallels aren't as rare. And in terms of inserts, they come on very plain cardboard whereas the base cards are totally crazy in their design. It's batty! 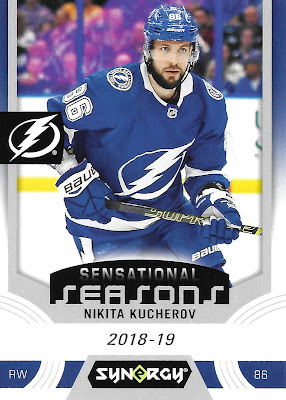 As you can see, the insert cards don't have much going on with them at all. They seriously look like they came out of a lower-end retail release. Some of the inserts will have serial numbering making them a bit more collectible, but the plain inserts will not be very desirable. 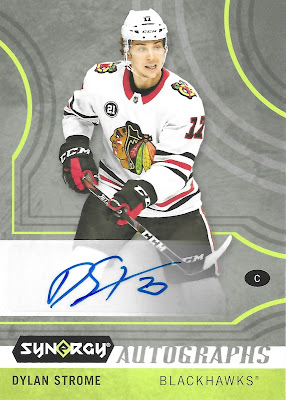 Synergy is not a hit driven product. There will be boxes that don't have hits in them. Sadly, the hockey market isn't as into these parallel driven sets as the other sports are. It looks like Upper Deck is trying their best to get hockey collectors into the parallel game. Allure and Synergy are products that should help - but there is still a long ways to go in that regard.