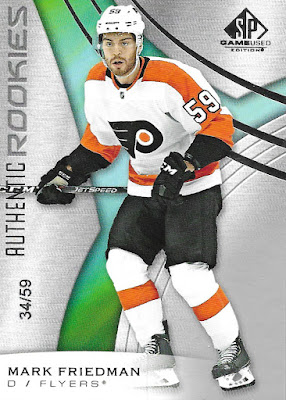 SP Game Used released this week to provide collectors with 'premium hits'. The product is configured in a one pack-per-box format holding 6 cards. While there certainly are premium hits to be found, getting them proves to be quite the difficult task. To be honest, SP Game Used has never been a favorite of mine. But maybe this year's edition will change my mind!

So after opening my box of 19/20 SP Game used, my mind has not been changed. I still think this product is terrible. The numbering of the cards are all over the place with boxes full of weak hits. The base design overall is decent, but for a product called 'Game-Used' there just needs to be more... much more. Typically a box will have two standard cards in the front (a rookie and a vet). My box contained two rookies. Both were serial numbered, but both had very different numbering. It'd be wise to consult a checklist to figure out which variation you get. 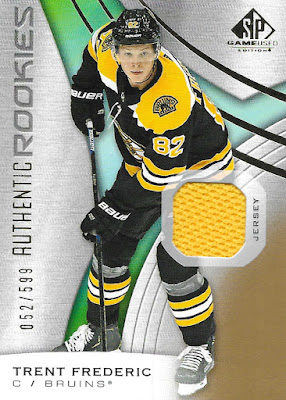 A standard jersey card really isn't anything special. Other than for player collectors, the standard jersey hit is not an exciting pull. I'd much rather get a low serial numbered card than one of these. The jersey piece shown on the Trent Frederic above is a pretty small piece, but to really top it off, it isn't even game-used! The back of the card states that it is just a player worm swatch. Strike one for having game-used stuff in the product! 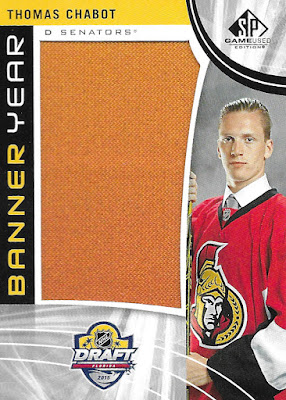 I was pretty excited to see a big fat card in the center of my pack. When I got to it I found a Banner year mem card. The enclosed material of this card was used in a banner at the NHL Draft. So... maybe a sort of cool NHL relic, but not a game-used relic. And this banner piece was BORING with just a flat orange color. For being the hit of the box, this was terribly weak. Strike two. 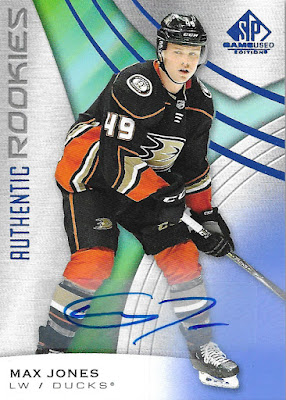 As SP Game-Used is considered a premium product, I expect some premium content. Un-numbered sticker autos are not what I'd call that. I've seen many boxes spit out these rather lazy auto cards. The design of the card doesn't even account for the autograph. They just stick it on the front of an Authentic Rookies card and called it a day. This is strike three for this box! 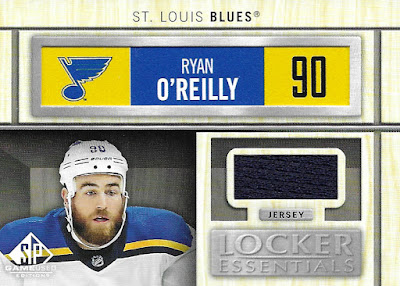 My only actual game-used content was in the form of this tiny game-used jersey piece of Ryan O'Reilly. The concept of this card is pretty cool, but the embedded nameplate is manufactured - not from an actual locker piece. Arg! What a frustrating product! I've been saying it for years... but this product needs a complete overhaul.