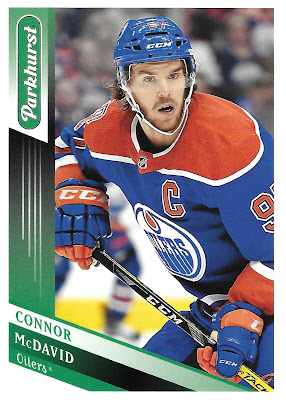 Parkhurst has been out for a while now, but I have only just seen it at my local Wal-Mart. It's a Wal-Mart retail exclusive which makes it a pretty difficult find for me since hockey isn't big where I'm at. Parkhurst is a relatively low-tier brand that nets you quite a bit of cards. The pack opening experience harkens back to the days when there were actually quite a few cards per pack. Thankfully, there are more than just base cards to look forward to when opening up this product.

For me, white borders usually signify a lower-end product. Throughout the 90's and early 00's, lower-end cards had these white borders. I'm not a huge fan of them as they give the cards a cheap feel to them. The green Parkhurst color scheme is also a bit awkward on hockey cards. Green isn't a color that is particularly associated with hockey, so having it prominently splashed over the card makes for a curious choice. I just find that the cards have a dated look with design choices that aren't up to par for a modern card. I don't believe Upper Deck is trying to design a retro looking card here either. These cards are just stuck in the middle of nowhere. 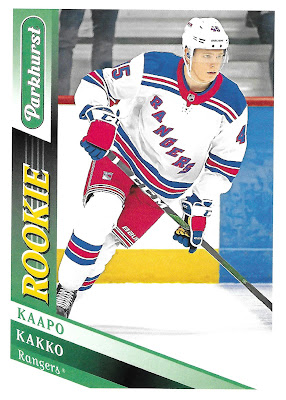 Rookies (and All-Stars) have a special designation added to them. I do, however, get the same vibe as the standard base card. These cards look dated and the 'Rookie' addition just heightens the dated look. The font used is questionable to me. However... for some strange reason I like it... it's sort of pure cheese! 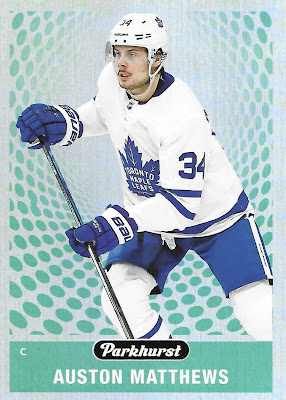 Opening up a blaster of Parkhurst will net you quite a bit of inserts and parallels. Thankfully, there aren't any pure base packs to be found. The inserts typically take on a shiny form with parallel cards opting for gold or silver borders. The standard inserts are very common, but some very low numbered cards as well as autographs can be found in the product. 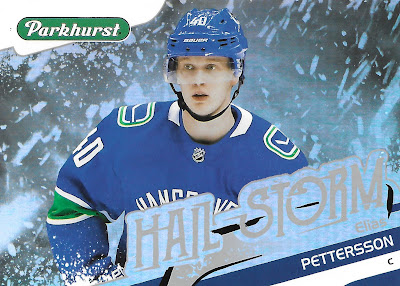 I'm a bit mixed when it comes to this product. I am not a huge fan of the design, but somehow its cheesiness attracts me a little. I suppose it does bring back a small sense of nostalgia for cards made at the turn of the century. If I saw some again on my visit to Wal-Mart I'd probably want to pick up another blaster of it as it is a pretty fun break.