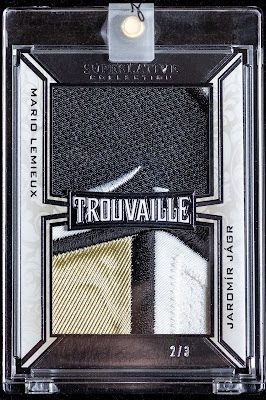 I haven't opened any of Leaf's hockey products, but I thought I'd give Superlative a try. It's expensive, but comparable to some of Topps' higher-end one-card-per-pack offerings so I went for it. Collectors can expect to find premium autographs and memorabilia within the boxes of Superlative. There are some very interesting cards available, so if you're looking for something a bit off the standard Upper Deck releases, this is one of the few available choices.

Product Thoughts
At about $150 per box at release, these cards are pricey. I'd say that the quality of memorabilia rivals The Cup though. Shields as well as large patches are some of the major selling points of Superlative. Leaf has got to put in their best effort here because otherwise collectors wouldn't go for a product that isn't officially licensed by the NHL. The two memorabilia pieces that I got were both patches and fairly nice sized chunks. No picture is really needed, and there really isn't much room on the card for photos anyways. I guess as long as the card is completely filled with the memorabilia, it looks pretty good.

While the memorabilia cards impress in Superlative, the autographed content is a little lackluster because - from what I've seen so far - they are mostly sticker autographs (or cuts). For a super expensive product, most collectors would expect on-card signatures. That's not the case here. So in this case The Cup has a huge edge.

The Leaf releases are very niche and probably won't reach a huge collector base. I'd say that only collectors looking for something beyond Upper Deck would give this a try. Because the product is unlicensed, they will definitely not hold the value of an equivalent Upper Deck card. But if you're just looking to get some great game-used relics, this may be a nice place to look.