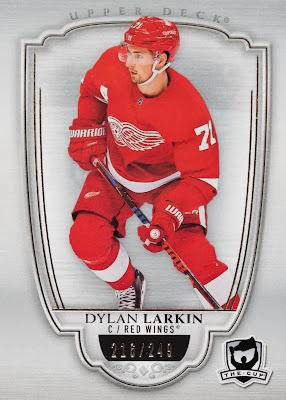 And that's a wrap for the 18/19 collecting season! Upper Deck released The Cup this past week marking the conclusion of last season's card releasees. The Cup is a very expensive product that is an absolute thrill to open. Upper Deck gives you their best effort here with huge hits and big time hockey names to find.

Product Thoughts
At well over $500 a box, The Cup is not something that every collector can afford. So in that way it becomes a legendary product just in price-point alone. For your money, you really expect to get some really awesome hockey cards. And yes, those really awesome cards can be found in boxes of The Cup... just not every box. 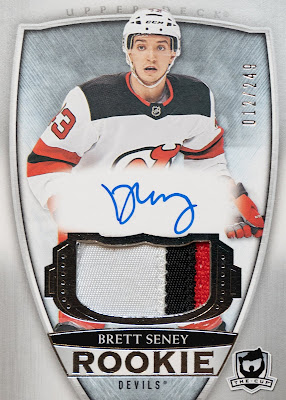 Most of the rookie cards in The Cup are numbered to 249. That number used to be relatively low, but nowadays I'd consider it a pretty big print run for the highest end cards. Most of the flagship high-end sets cap the rookie auto patches to 99. In The Cup, on the biggest name rookie cards get the 99 treatment. If you pull one, you are very lucky and will be in possession of a very valuable card. Sadly, many of the rookies in The Cup can end up selling for under twenty bucks on the secondary market as the years pass by. I'd suggest getting rid of no name rookies as soon as possible since they may never be worth as much as they are currently. 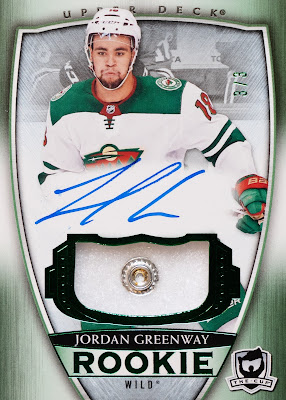 My box's main hit was a strap button card numbered to just 3. Aside from the button, it also featured an on-card autograph. It's this type of card that makes The Cup an intriguing product. If this card was of a superstar like Sidney Crosby or Connor McDavid I'd be elated. As it stands, it's just a cool looking card of some Minnesota Wild player - sorry Wild fans. 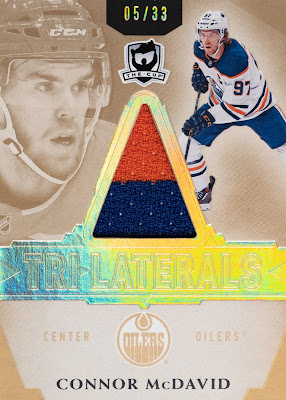 Though you get six cards per pack of The Cup, you're really looking at one main hit, an RPA or two, and some throw in base and rookie cards. Lots of the cards are filler, nice filler, but filler nonetheless. When buying The Cup, just hope that you get a great main hit and some decent filler cards. I thought that this McDavid Tri-Laterals jersey was a decent one to find in my box. 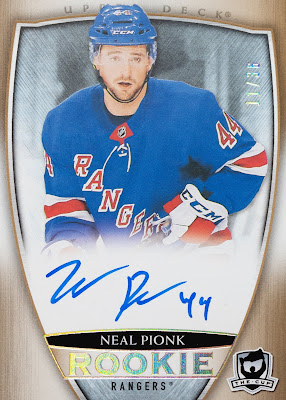 As I've always said, it's probably best to just pick up the cards you really want on eBay as they are surprisingly affordable - definitely a mere fraction of what a full box would cost you. Group breaks are another way to go for The Cup as they make getting into such a high-end break a bit more affordable for folks.