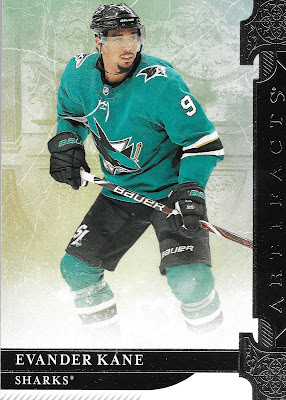 Oh, Artifacts... you used to be so good! I used to say that the real start of the collecting season began with Artifacts. Hobby boxes would contain autographs and there would be awesome patch cards coming out all the time. Those days are long gone. It seems as though there are hardly any autographs to be found with most boxes just giving out boring jersey cards. The Artifacts I've already gotten is all that I will be getting as this product is just a shell of what it once was.

Product Thoughts
Artifacts is a mid-tier product that has some nice base looking base cards. The base cards have a nice foil elegance to them though I'm not a huge fan of the design this year. It used to be that these cards were nice enough to collect all by themselves. At the retail level, that's pretty much all you got aside from one numbered card. This just doesn't cut it in today's hobby. Rather than moving forward and giving collectors more of an incentive to purchase Artifacts, it seems as if the brand has made quite a few steps backward. 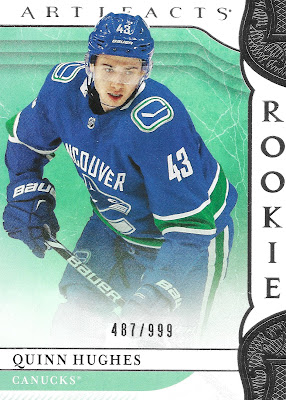 Like every year, Artifacts comes before the NHL season begins. Collectors can find players that suited up last year and were held over for a rookie card until now. This is just like MVP and OPC that came out before except that the rookies now feature serial numbering on them. Artifact rookie cards have not been historically popular so while they are serial numbered, that doesn't make them that much more collectible. 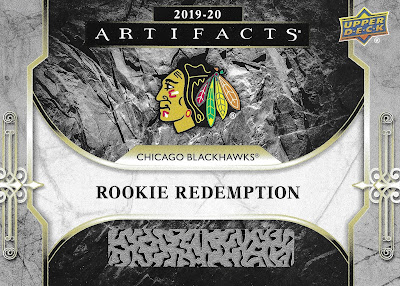 What does set Artifacts apart from the other two already released products are the rookie redemption cards. These cards can be redeemed for a rookie card in the future. While most will net you just a regular rookie card, collectors can find memorabilia versions and autographed versions as well. The redemption cards of the top players in the draft can fetch quite a high dollar, but I don't like knowing that I'll have to wait a good long while before the card comes in. 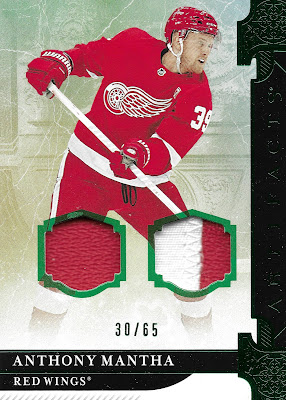 Upper Deck has used the same parallel structure in Artifacts for years. You'll always find these two spaces for jerseys or patches or other parts of the jersey. I feel decently lucky to have pulled a jersey/patch card from my box. I've seen box after box of Artifacts and they feel as if they don't come out too often. 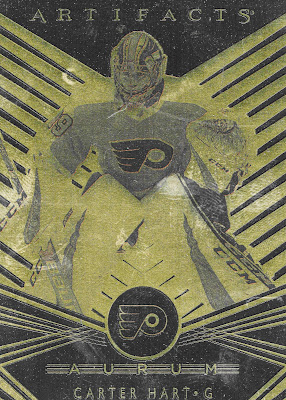 The Aurum cards have been a thing for a couple years now and I honestly am not a huge fan of these. These cards count as a hit in your box if you get one, and the best thing you can do with them is collect them all and redeem them for exclusive cards from Upper Deck. I feel like these cards are made so that collectors can buy more product to find a set. There are a lot of cards to collect in the Aurum set so I've never had the desire to even go for it. Upper Deck seriously needs to rethink what it will do with Artifacts going in to the future. As of now, it is a product that is just withering away.