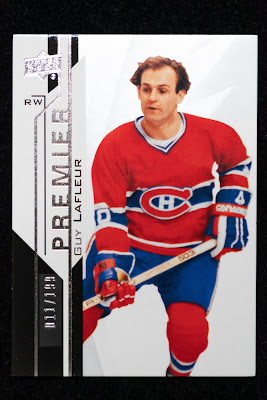 Upper Deck is ramping up their high-end card releases with Upper Deck Premier. These one-pack tins will cost you around $200 and come filled with hits. The cards are on premium card stock that is nice and thick (thought not as girth-y as The Cup, of course). The cards are well-designed and look great, however, I question the value to be found here as Premier doesn't have the same allure as either the Cup or the recently released Ultimate Collection.

Product Thoughts
Premier comes in a nice tin and at a fraction of the price of The Cup. I guess you could call it "The Cup Lite". There are rookie patch auto cards in this product as well as numerous large patch cards as a main draw. The autographs come on-card - which should be the case for the price you pay for this stuff. Though this product is pretty expensive, I don't really feel that Premier is a great offering from Upper Deck. Aside from the really amazing jumbo patches, the value of these cards show that collectors don't put much stock in it. 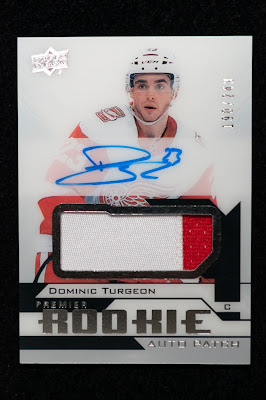 If you look at the RPAs, you'll see a generous piece of patch, a good amount of foil, an on-card autograph, and numbering that is somewhat similar to that of The Cup. But I find that the value of these cards doesn't reflect the quality of their design and appearance. I wonder if this is because Premier is a relatively newer product than The Cup and Ultimate Collection. It doesn't have the longevity of those other two brands - it's just the kid that isn't as popular. And that sucks because the cards do look good and they are expensive to purchase in box form. 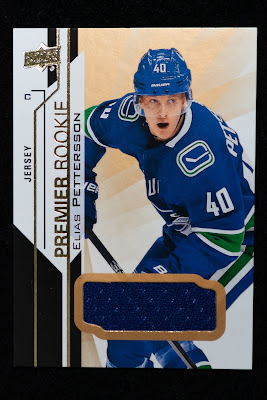 For a pricey product, getting the jersey cards thrown in at the end of the pack doesn't really do it for me. The jersey cards are pretty thin feeling and are a bit of an afterthought. They're really just filler is what they are. I don't find these cards to be very interesting or fun to get in such an expensive product. These cards give Upper Deck the opportunity to boast about the number of hits per box, but those in the know will know how hollow those numbers really are. 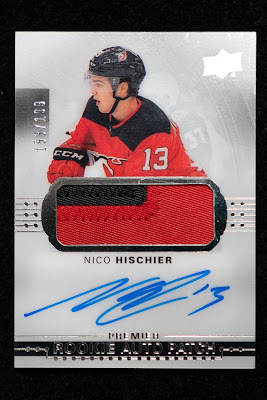 In the end, it sounds like I'm just bashing on Premier, but I'm really not. It's a great looking product with some awesome jumbo patch cards available to find. Maybe a good idea would be to cut out all the fluff like the boring plain jersey cards and get the price down just a bit more. As it stands now, Premier is too high a price for a brand that collectors don't seem that excited about.