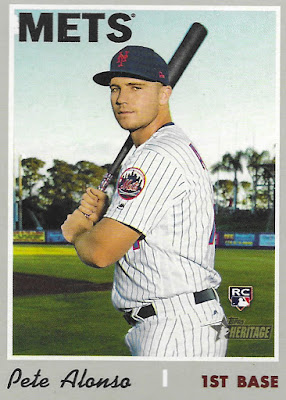 Topps is just releasing release after release! Both Heritage High Numbers and Bowman Sterling came out at the exact same time. I know my money is just flying out of my pockets! Anyways, if you're looking to purchase a box between the two products that came out today, Heritage High Numbers is the way to go if you're not looking to spend as much. Boxes are a little over a hundred dollars and you get an enormous stack of cards to enjoy after you crack all the packs.

Product Thoughts
This year's Heritage wasn't too popular with collectors in my opinion. In hearing and talking to fellow hobbyists, many of the them didn't like the boring grey borders that these cards featured. And I don't blame them. Opening pack after pack of these cards is pretty monotonous. Sadly, there isn't too much to really look forward to in a box of Heritage when it comes to hits as there is only one per box. Thankfully though, this High Number edition at least has all the big rookies from the 2019 season. I definitely would pick this iteration over the first set as the rookies do make a difference in terms of the collectibility of this release. 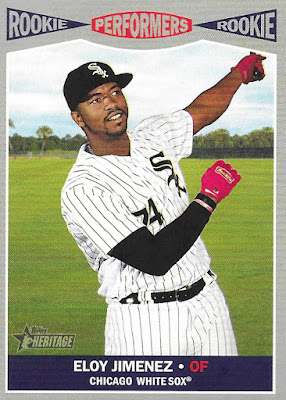 I mentioned that going through a box of packs of this product is somewhat monotonous. Well, check out this insert card of Eloy Jimenez. Even the insert cards don't have pop as they sport the exact same grey border that all the other cards have. I really wished that they'd at least change it up a little when it came to these cards. It wouldn't make the product worth anymore, but at least they would break up the action just a little. 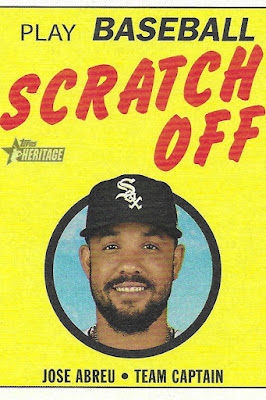 Thankfully, there are some inserts that are colorful and different. The Scratch Off cards can be opened up like a book. Collectors can actually play a little game of baseball using them... not that anyone would really do that though. These Scratch Off cards come at about one-per-box, but I would prefer them to be a case hit. That would give these a little bit more interest. As they are now, there's just not too much to them. 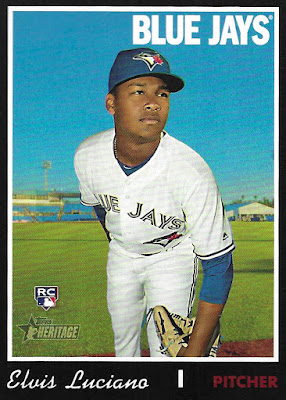 You can easily see that changing the border color makes a huge difference. I really like the look of the black bordered parallel card. The card looks really sharp and has the pop that the standard base cards lack. The other parallel card that I got in the box was the chrome variation. The chromes look great as well. It's just too bad that these cards are few and far between. I think getting one of these black bordered cards per box is about right... but the chromes should be much more prevalent. It would incentivize collectors to perhaps go for a set. As it stands, trying to do either border variation set is an extremely difficult task. 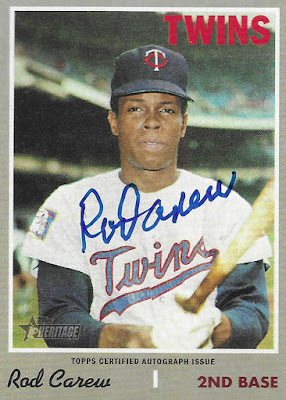 Most boxes of Heritage will net you a plain jersey card of some sort. That's what I got in my first box from earlier this year. I was shocked to pull this Rod Carew on-card autograph today. Rod is a hall of famer and this card is very sweet. I consider myself very lucky to have gotten it as I know how few and far between autos can be in this product.