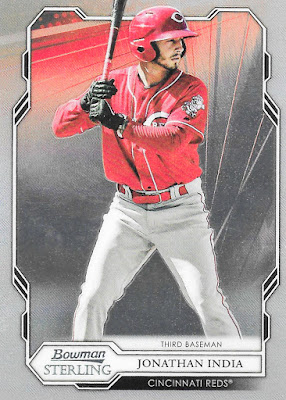 Last week Topps released the high-end Tribute cards. This week they're back at it with Bowman Sterling. This high-end young rookies and prospects brand will cost you over two hundred dollars per box and will net you 5 total autographs. Sterling was a brand that Topps put out a few years back, but hasn't made an appearance until this year's release. If you love rookies and prospects, this may just be the high-end release for you.

Product Thoughts
The main draw of Bowman Sterling is the one-per-pack autograph that you can find in the little mini-boxes of the product. The vast majority of the autographs will be of young players - up and coming or not. Most of the autographs you find will not be worth the chrome stock they are printed on in five years, but baseball collectors love to speculate on talent, and this product is all about that. The cards themselves are a nice silver color, but nothing about the way they look really stands out. In that way it is very Bowman-esque. It doesn't matter how the cards look, it just matters that they will be worth a lot later! Prospects and rookies are split 50-50 throughout the base set. Each is numbered according to their status. Rookies like this Vladimir Guerrero Jr. will have the traditional rookie logo in the corner. Some current stars are also featured in Sterling, but they are hard to come by. 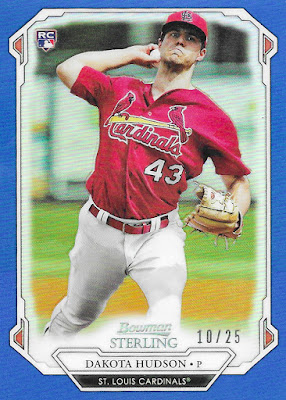 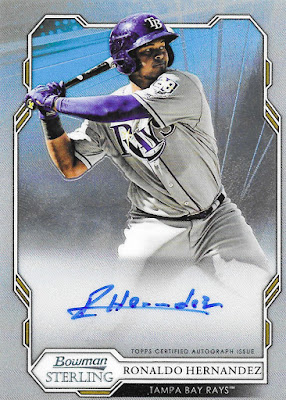 The autographs that I've seen out of Sterling have all been on-card. And that's the way it should be for a product that costs as much as it does. I've found that it is good just to carefully store away the hits you find in these prospect-laden products as you never know how they will mature in the future. Imagine going back through your cards and finding a player's first Bowman card that is now a star. With Bowman you just have to be really patient. 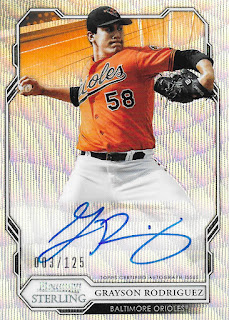 What's better than an autograph or colored parallel? An autograph that is a special parallel. Typically these cards are serial numbered. The numbering goes all the way down to 1/1, so there are some pretty rare cards to find. These parallel cards have a lot of appeal to them. First of all, they look really awesome. And secondly, some of the prices the best players can realize can be pretty insane.