Now that the 17/18 season has been in full swing for a while now, Upper Deck has been ramping up its production of cards. Black Diamond has just hit the market with its premium format and hefty price tag. The change into a premium product has definitely come with mixed results. Let's hope Upper Deck has tweaked it to be more appealing to collectors this time around. 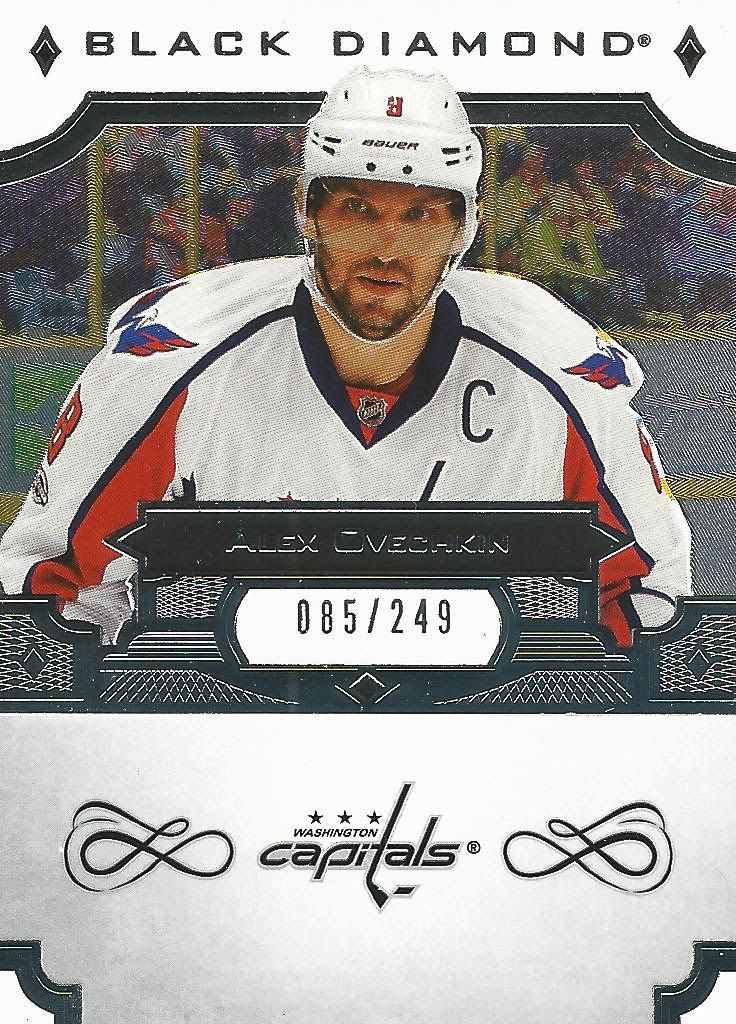 Base Card Design -
The Black Diamond base cards have a lot going for them. The white background with the old Black Diamond like foil in the background is really sweet. I do believe that these base cards are a worthy upgrade from what Black Diamond used to be with its thin foil stock. The side edge of the base card might be my favorite part with its white/black/white layered wafer aesthetic. My only gripe about the standard base cards is the team logo at the bottom. This portion of the card is obviously a placeholder for a relic on a higher-level format. I just wish it wasn't so apparently so. Base cards are limited to just 249 each, same as The Cup! 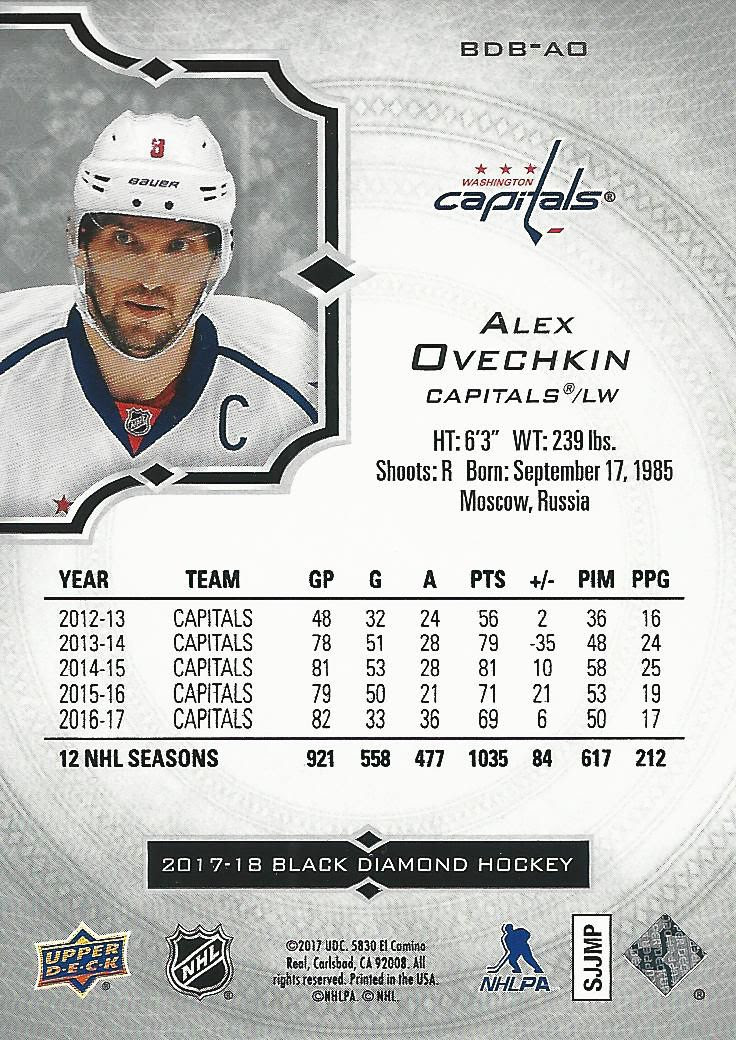 The back of the base card is in full color with some good looking designs. It's elegant, but not too flashy. I actually expected a little more from the back of the card as the product is Black Diamond. To me there should be just a bit more 'bling' to these backs. 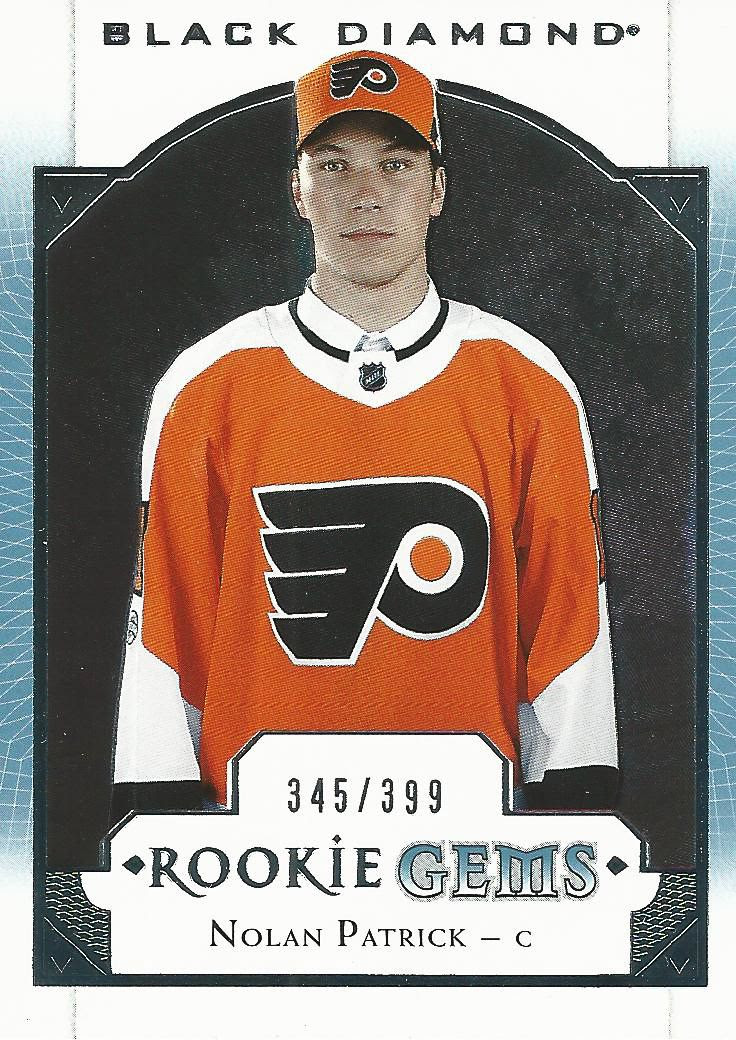 The rookie cards in Black Diamond have been the Rookie Gems. Because Black Diamond doesn't have real numbering (the entire set is designated by letters), it can be hard to distinguish which cards are part of the main set and which ones aren't. To me, this Nolan Patrick Rookie Gem card isn't the true RC I want out of Black Diamond. Those would be the actual cards embedded with diamonds. Unfortunately, those cards are very difficult pulls. You only get a couple per case and they are numbered to only 99.

Inserts/Game-Used/Autos -
Black Diamond comes with one fat Black Diamond pack and one Exquisite pack. This product is completely high-end now, so collectors should expect to find nicer hits when buying it. 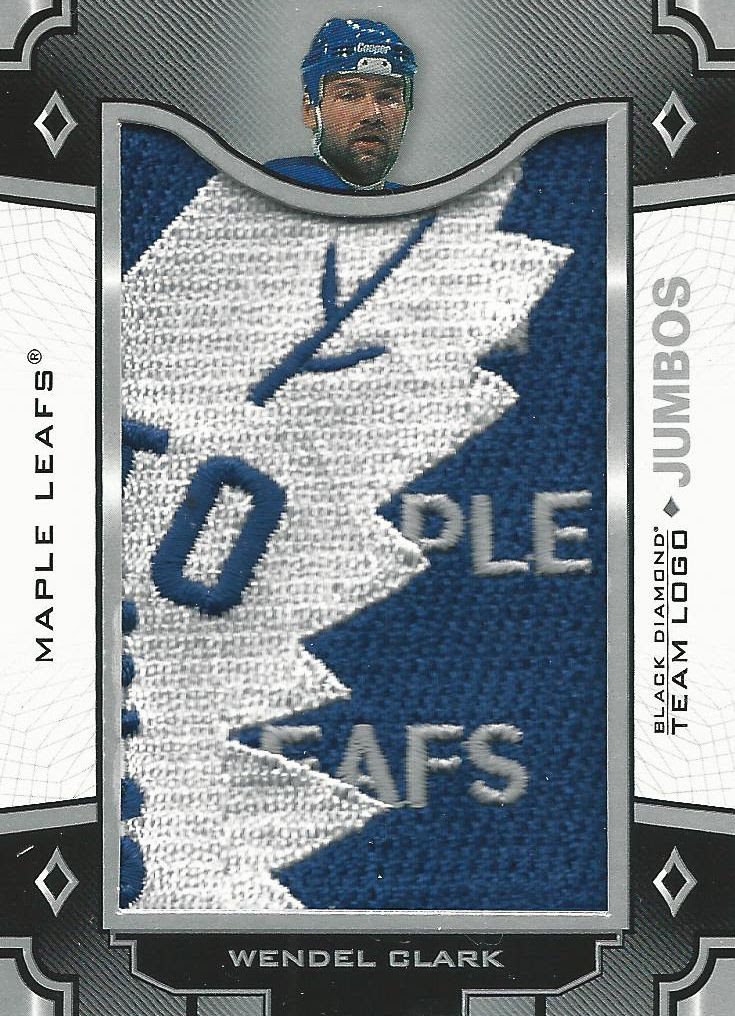 What an awesome patch piece!!! Too bad it's just a manufactured one. Sadly, these fake patches are back in high dollar Upper Deck products. When I'm paying a couple hundred dollars for a box, I want everything to be authentic. It's already bad enough there are photoshoot pieces on cards rather than game-worn. But these completely made-up patches are just too much... I personally don't like them and wish they were out of the product. 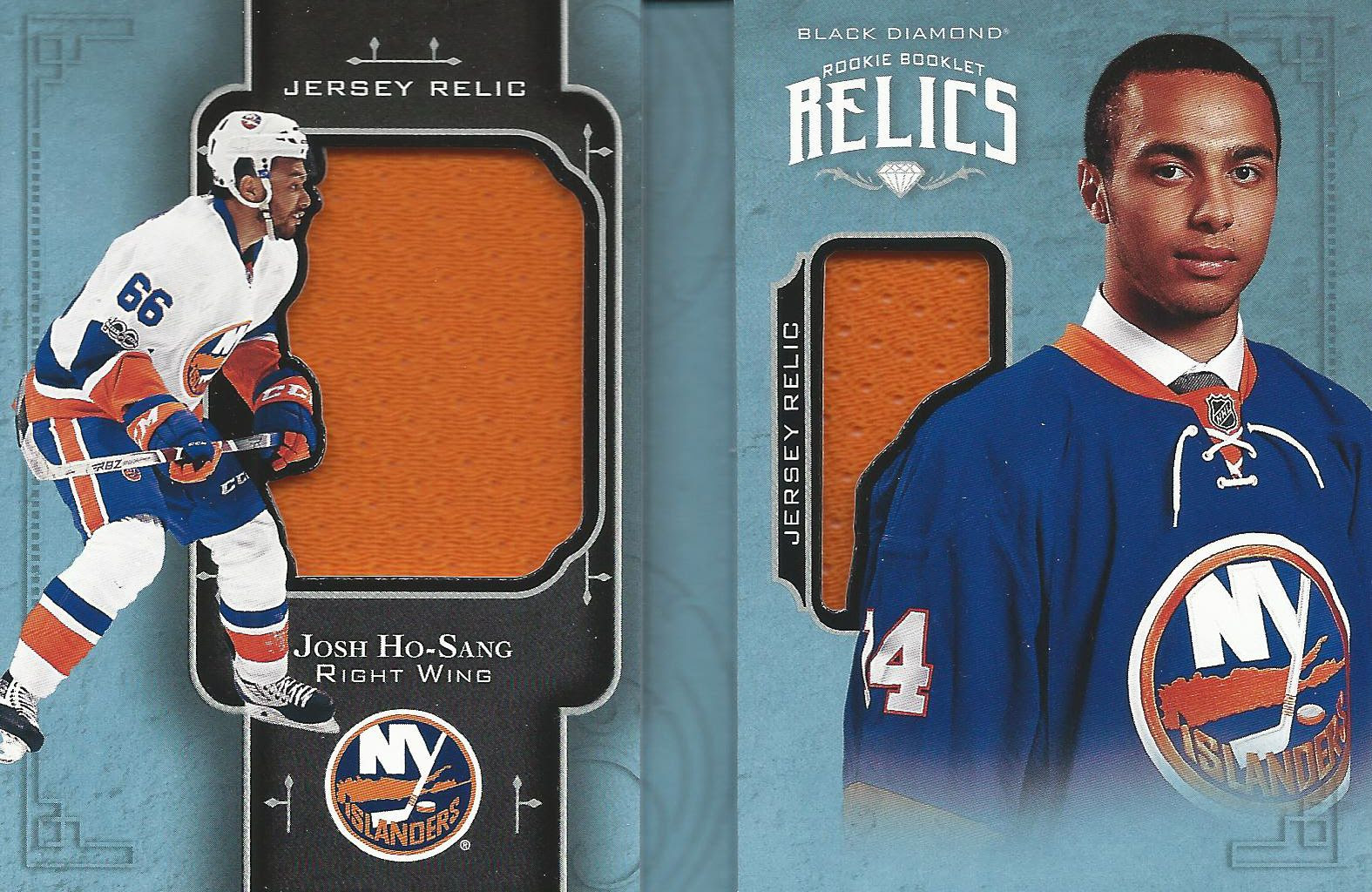 The Rookie Booklet Relic at least had some player-worn jersey pieces in it. Seeing that the booklet was numbered to 199 I knew it would just be a couple of jersey pieces. Booklets have been around for a while now so pulling one isn't that exciting unless you hit some great patches or autographs. I for one thing a book card is too much card for some regular jersey swatches. The tier above these standard jersey books feature and autograph and a patch with numbering to 99. The lone autographed card in my box was this Signature Placard (Group C) of Derek Sanderson - certainly not the most excited player to pull. The signature is in silver ink on a black placard embedded in the card. I guess even these aren't technically considered 'on-card' autos, but at least they look nice. I just wish I had a better player to pull. Sadly these cards have no serial numbering. 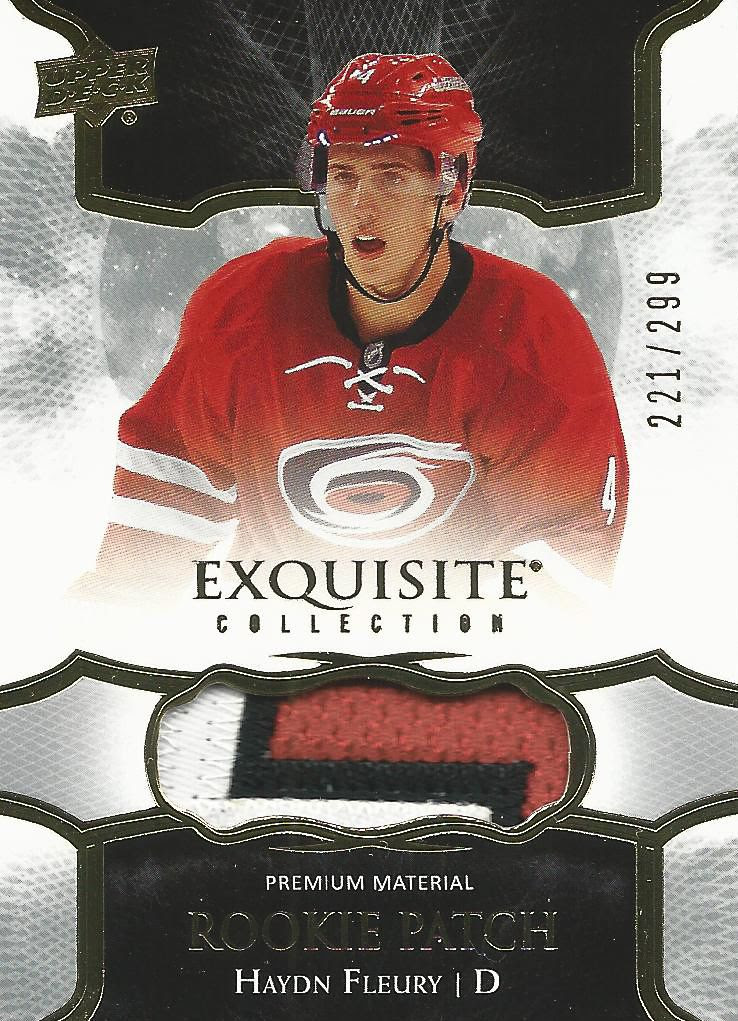 My Exquisite pack yielded a nice looking player-worn patch of Haydn Fleury. The Exquisite brand is on par with The Cup and the cards look great. I love the foil used on it as it gives the card a very elegant feel to them. These patches do have a rather high numbering to them. This particular card was numbered to 299.

My box/pack of Black Diamond didn't feature anything that really stood out - especially not for the price. There are, however, some really sweet pulls available to be found. I'm sure they are few and far between though - which shouldn't be that case when it comes to a premium product such as this.

Overall Rating -
I really like the fact that Black Diamond switched to a premium format. It was a brand that needed to be different as the original product was getting stale. The one-pack per box format is a good idea, but it isn't implemented well. I think it would have been much better to provide less cards and have the price of the product be in the $100 dollar range - similar to some of the very popular Topps baseball products on the market today.

I definitely felt that I had bad value for the amount I paid for this box of Black Diamond. Upper Deck has some serious tweaks it needs to consider when thinking about this product next year.

As it stands now, I cannot recommend Black Diamond to many collectors. This is a high-risk, high-reward product that leans much to the high-risk side of things. Some of the cards in the product are outstanding looking, but there are too many cards (like the manufactured patch cards) that get in the way. The only way I can see getting more of this would be if it took a very serious nose dive in terms of price. Only then I'd begin thinking about it.

Everyone's favorite Upper Deck release has now... well... released. Series One is out and collectors will be eagerly buying it up to collect the new Young Guns, inserts, and even the base cards. Series One is a product that every hockey collector can purchase and enjoy. The price is right and there are plenty of desirable cards to find. This well-rounded set is always a hit! 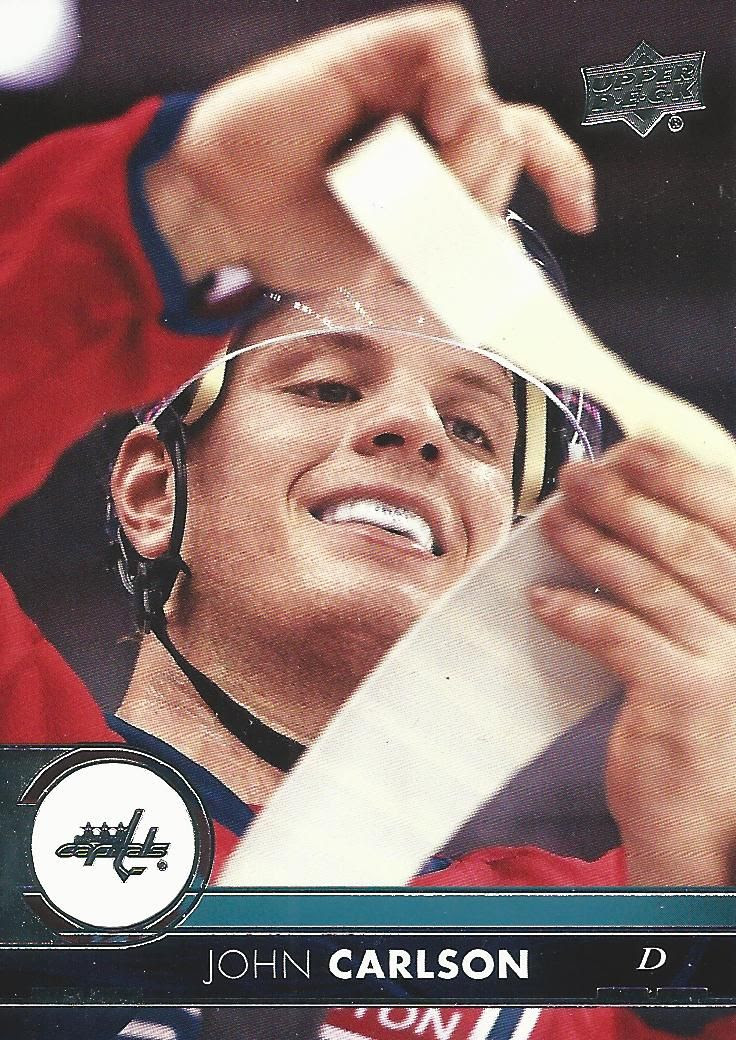 Base Card Design -
Upper Deck base cards have always been clean and neat. This year's set is in that same vein. The focus of the card is on the photo. The team logo and player name nicely frame compliment the photo by not getting in the way. The foil accents and borders don't distract at all - they actually do a nice job of adding some nice flare to the elegant design. As always, the photos on the cards really stand out. They capture unique angles and great action shots - noticeably more so than last year. I feel the photos are a cut above and each card is really enjoyable to look at. 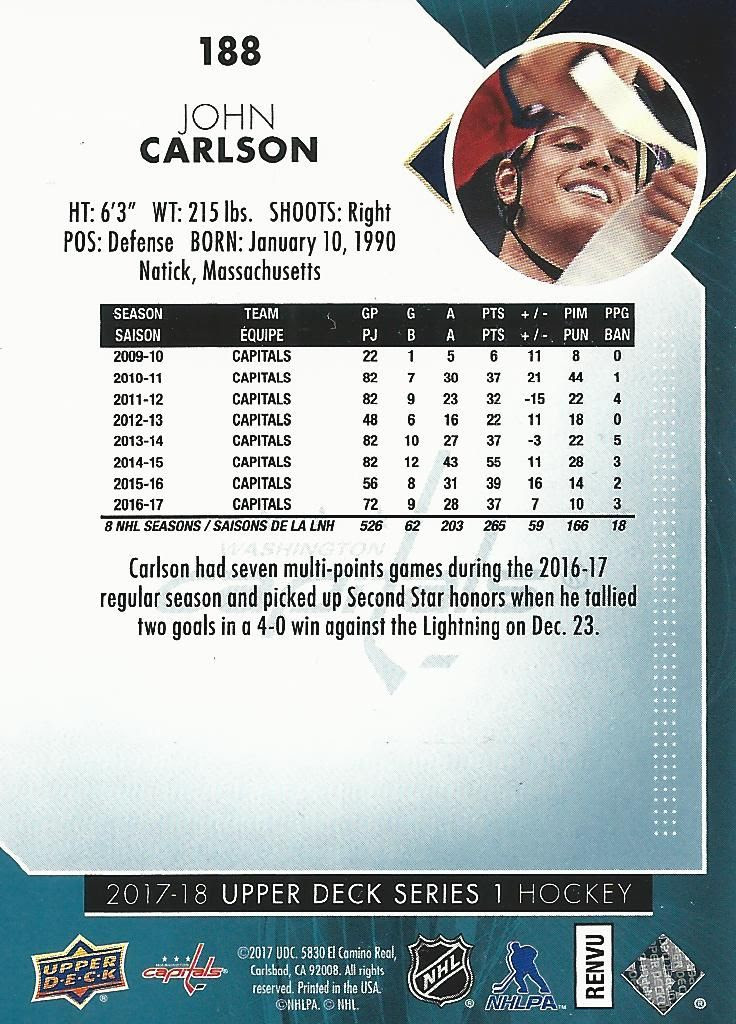 The card back is extremely clean, maybe too much? The font and stats are on there pretty small and there seems to be too much extra space that could have been utilized better. I still, however, appreciate that Upper Deck employs a full color back with the player photo. I also love the fact that there is a little write of for collectors to read. It's a great way to learn about the player featured on the front.

The star of the main Upper Deck set is the Young Gun set. Young Gun rookie cards are highly sought after by all collectors. One of the appeals of the set is the way they look. I'm always intrigued by what the next design of the Young Guns will be. This year's design is good, but I wouldn't say great. It follows the main set as the cards are clean, but there isn't anything about them that make them particularly special. I'd rank the look of these cards somewhere in the middle of the pack when it comes to Young Gun design.

Inserts/Game-Used/Autos -
Upper Deck boxes come with 24 packs. Collectors can expect to find plenty of insert cards, textured Canvas cards, as well as a memorabilia card. Upper Deck Series one does have autographs available, but they are pretty difficult pulls. 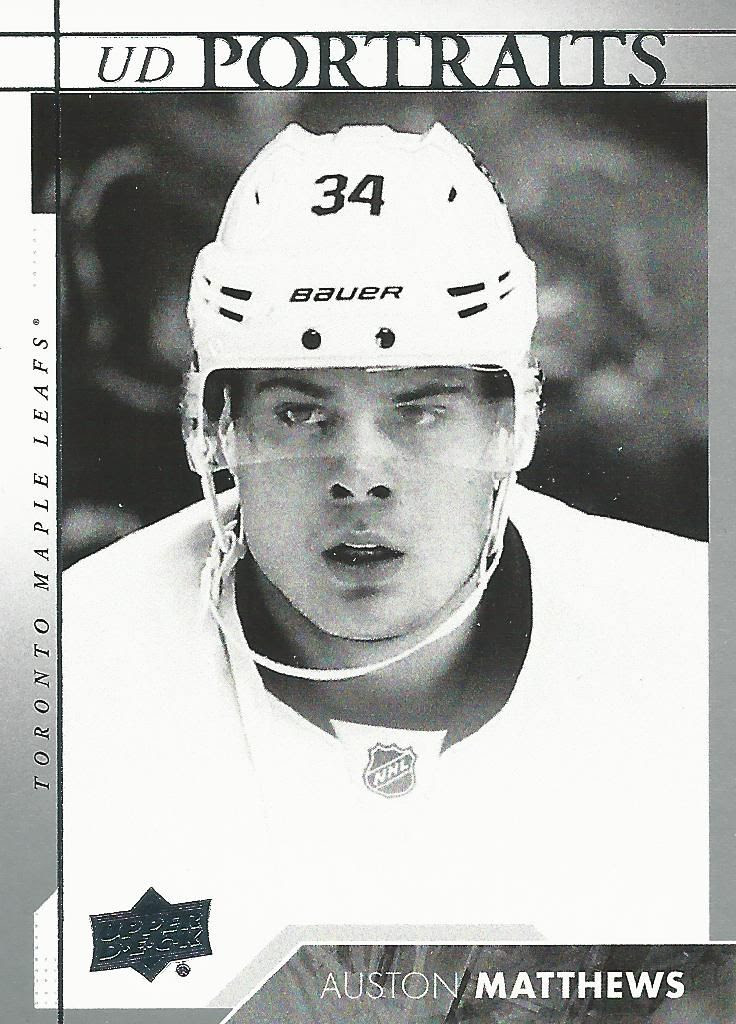 Like in previous years, the UD Portrait insert cards are back. These cards are all in monochrome and give collectors an up-close look at the player's face. This year's cards have a wider angle shot of the player whereas last year the headshot was much tighter. I like the wider perspective as it gives just a touch more context to the image. 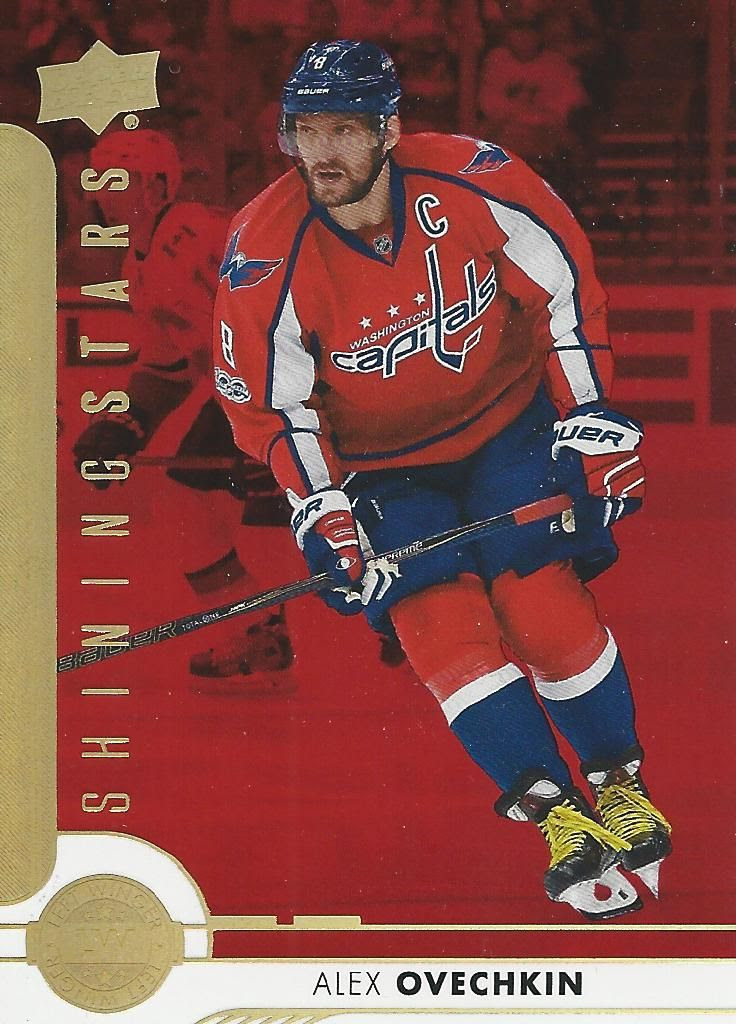 Shining Stars add a colorful pop to the set. The standard Shining Stars are in a silvery reflective foil. Rarer versions like the red foil Ovechkin I pulled have a beautiful colored shiny background. The parallels are tougher pulls but I don't see these cards having a huge secondary market value as probably tons and tons of them were printed. In Series One you'll only find centers, left wingers, and goalies. Does Upper Deck have something against right wingers? Well, my guess is that they will appear in Series Two. 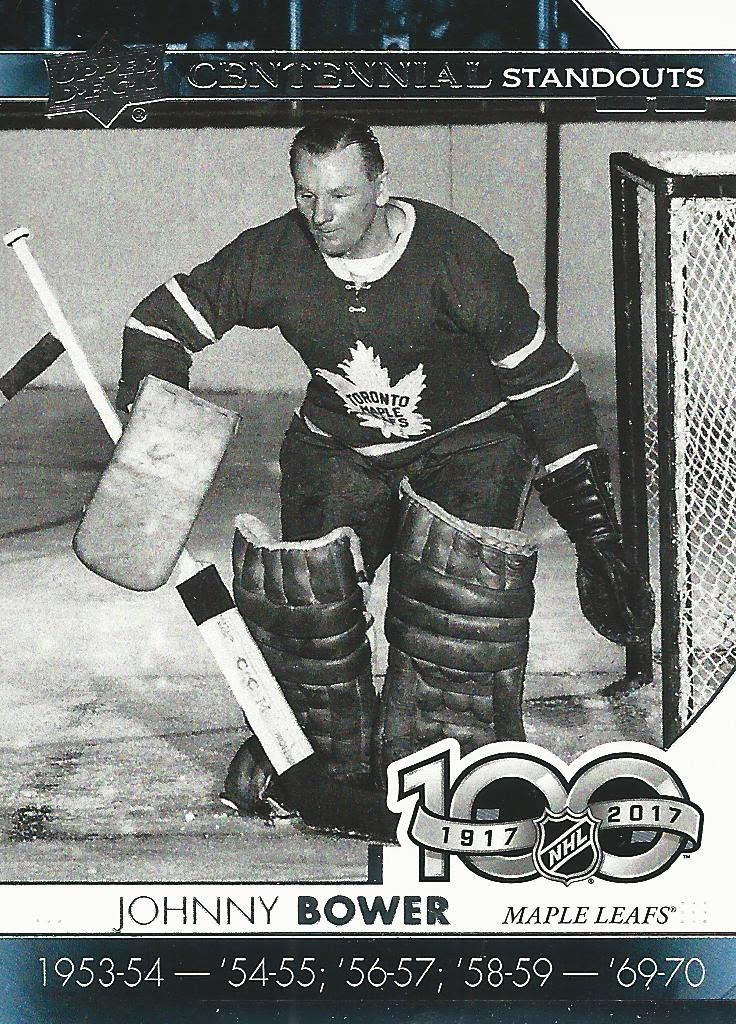 Centennial Standouts are inserts that commemorate the 100th anniversary of the NHL. The cards spans all eras of hockey and showcase some of the greatest players to ever play the game. This is a large set that has a design that could be used if it were its own base set is own release. Collectors who really love NHL history will love these and enjoy pulling all these cards together. 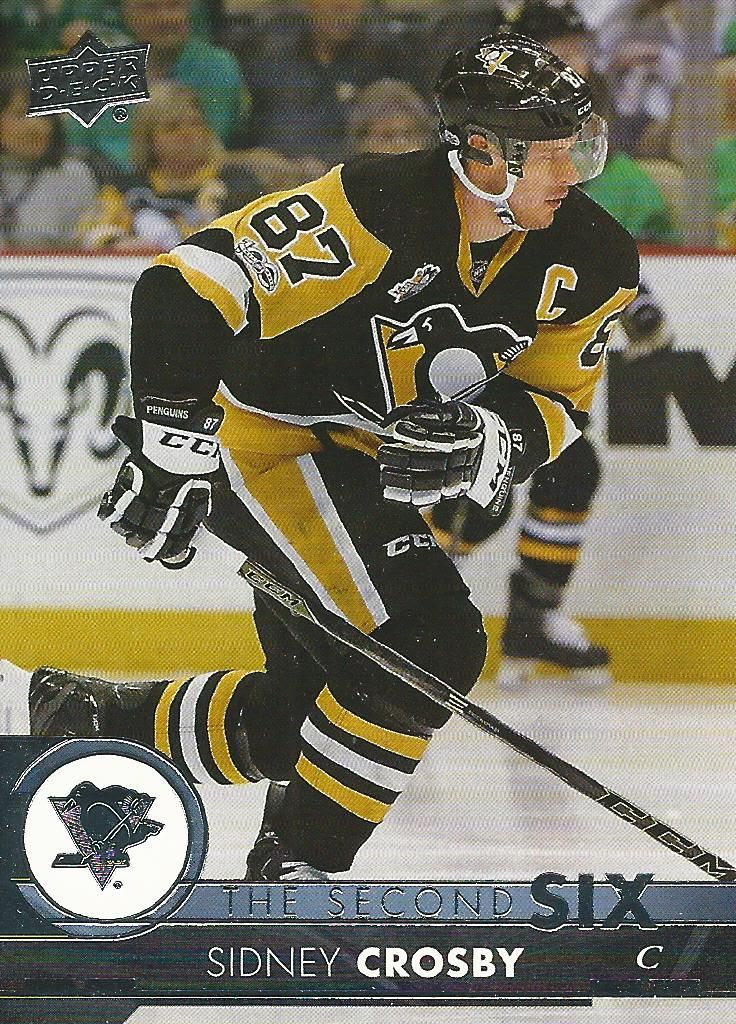 The Second Six insert set is an odd one to me. The cards look like base cards, but there is a foil logo at the top. The Second Six cards have a different back and are pretty tough pulls. Each card can be found one in a thousand packs! Yikes! There are other similar cards to these with some pretty hard pull rates. It really shocked me when I saw how difficult a pull it was! 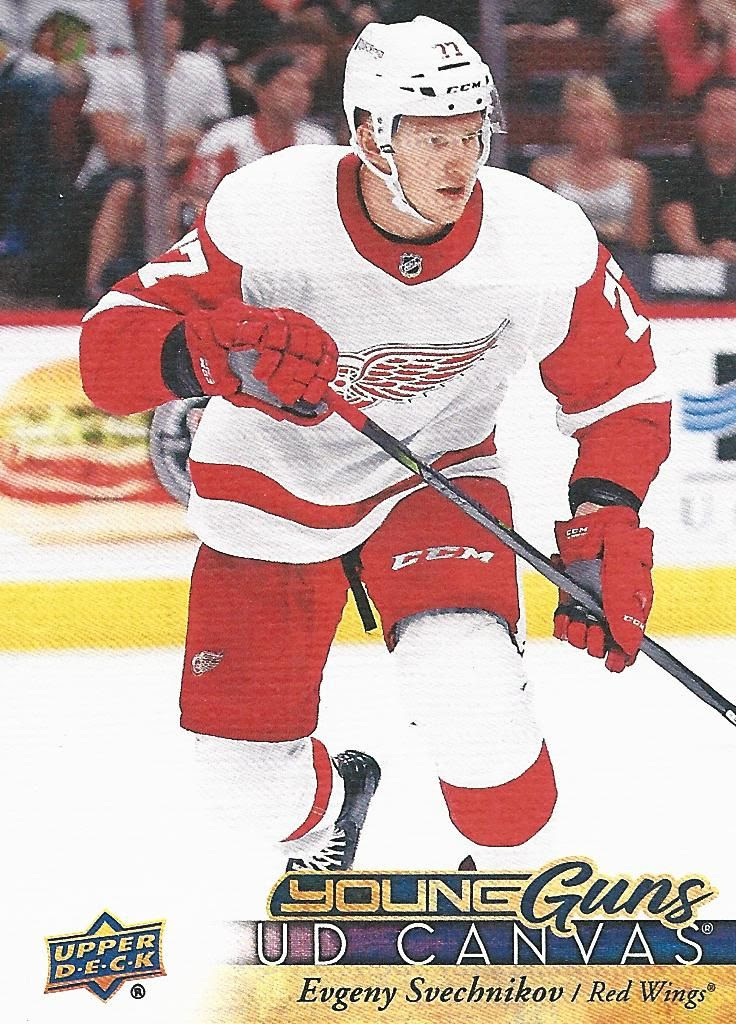 The UD Canvas cards this year have a lighter look due to the yellow/orange motif in the border design. I like it quite a bit as it gives the Canvas cards a refreshingly different look than in years past. They sort of remind me of fall... which is great as that is the season we are currently in. These cards feature the signature texturing that they have always had. Base cards and Young Guns both get the Canvas treatment. 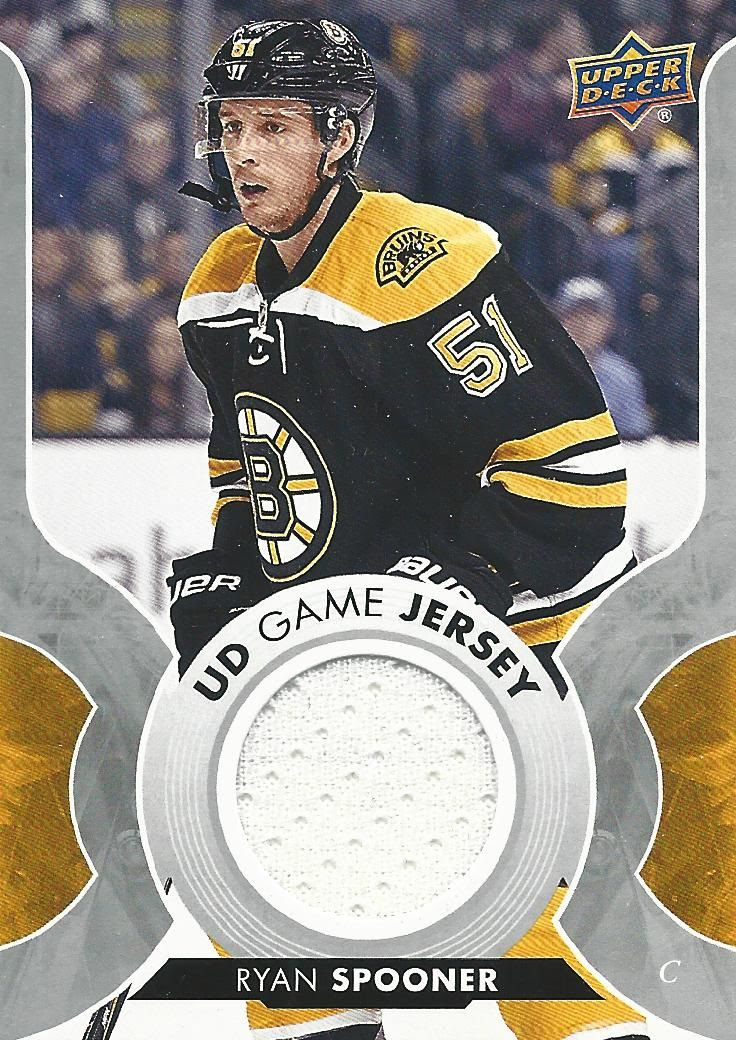 For collectors who just really want hits, Upper Deck throws in a jersey card at a rate about one per box. The official rate is 1:36, so there's no guarantee, but most boxes should have one. The UD Game Jerseys have been a staple in Upper Deck for a long time and they are nice hit to find when buying packs. These jersey cards don't usually hold too much value, but it's always fun to get a mem card.

As I mentioned before, autographed cards are in this product, but good luck pulling one. Clear Cut inserts are also here as well as other acetate cards. For being a mid/low level release, Upper Deck Series One really does have a ton of great things to find in it. The cards are tried and true and are great fun to collect.

Overall Value -
Upper Deck boxes come in at well under $100 each. It's a legacy product that doesn't rely on hits to have value. I love the fact that good Young Gun cards can be really worth quite a lot. Upper Deck Series One gives collectors the opportunity to really pull some great cards at a price that anyone can afford.

This years release continues the tradition of having a beautiful looking set with exciting cards to pull. Whether you buy by the pack, box, or case... there are good things to look forward to that aren't out of reach in terms of rarity.

Every hockey collector has to get their hands on some Upper Deck Series One. It really is a 'must buy' each and every year.