Well, here it is, Upper Deck's biggest, best, and most expensive hockey card product. Each pack/tin/box costs hundreds of dollars, and you only get a handful of cards per break. This stuff is really only for the high-end collector to bust. Each tin is extremely exciting to break... but you are not guaranteed to hit anything amazing (as you'll sadly see with my box)! 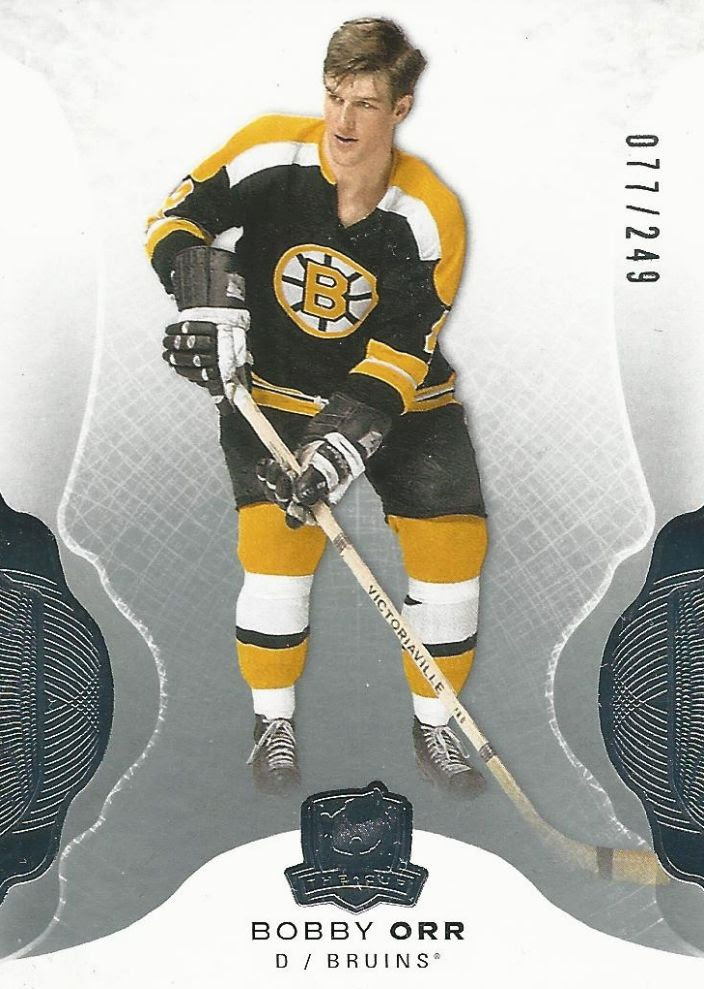 Base Card Design -
For most sets, the base cards are the most plentiful type of card you get. Not so in The Cup. Each tin comes with just one (or two) base cards. Each base card comes on very thick card stock and are serial numbered to just 249 each. The Cup only features players on note and includes legends such as Bobby Orr. In terms of the design, it's a pretty simple one with nice highlights of foil. The cards themselves don't pop or stand out too much, it's a very typical Cup design. They are just simple, elegant cards that are worthy of being Upper Deck's most serious set. 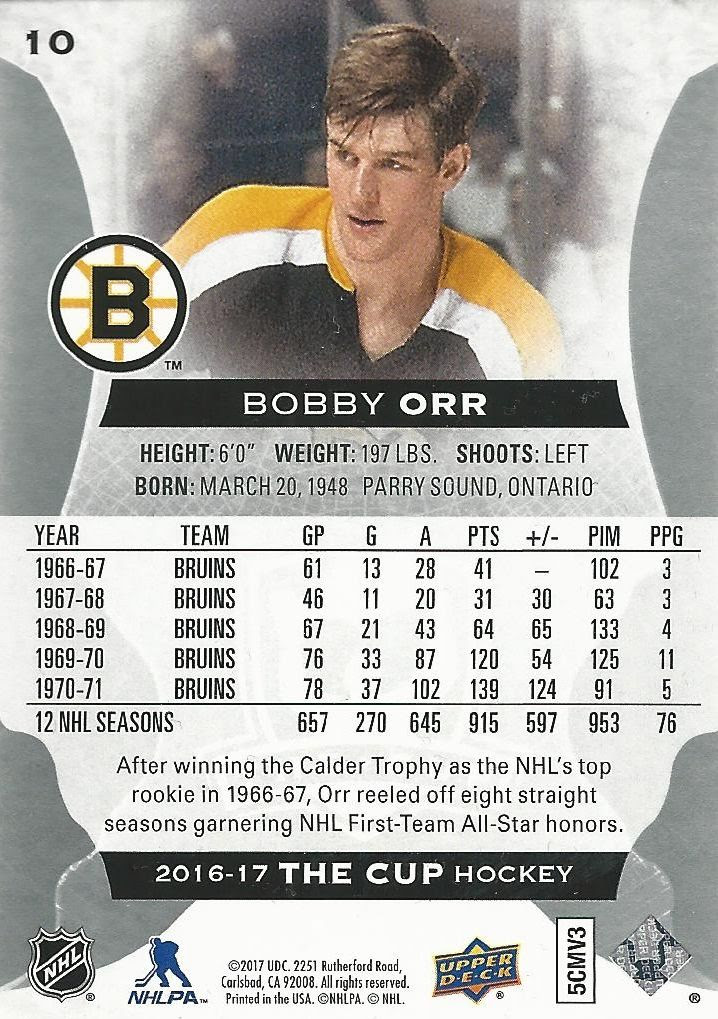 The back of the base card is also pretty typical. I do, however, really like that the cards have a little write-up for the featured player. Many high-end cards leave out many of the stats and information that lesser brands include. It's nice that The Cup at least has a good amount of information that collectors can scan over when looking at these cards. 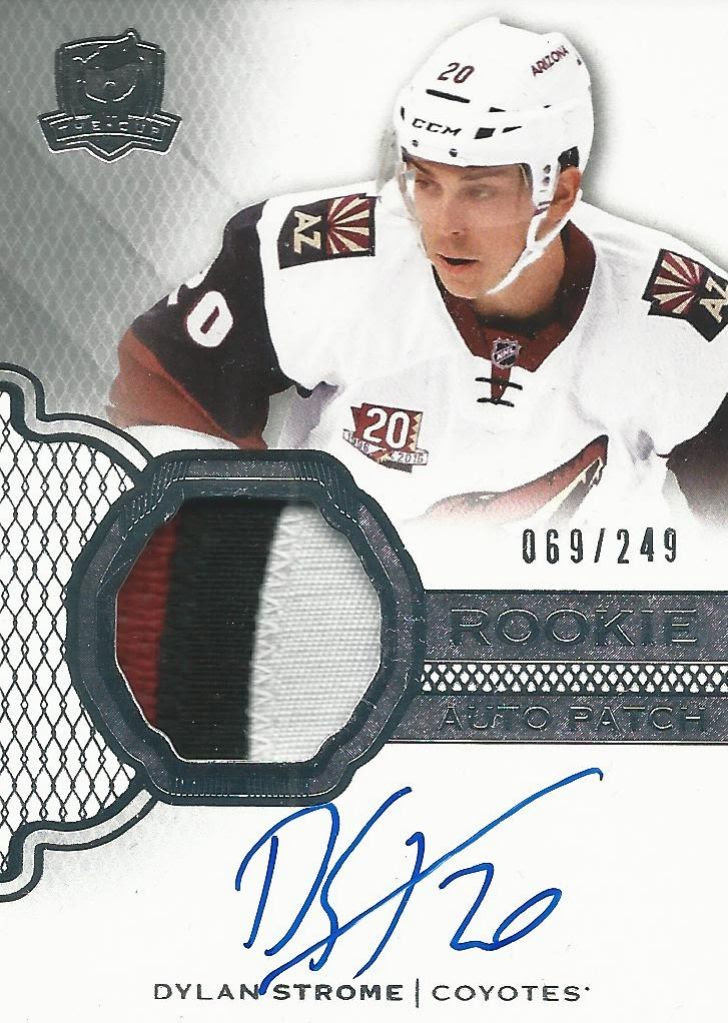 The most popular part of the main Cup set are the rookie patch auto cards. These are usually a player's best and most desired rookie card. Each card has a generous amount of foil and a decent sized piece of patch material. The autographs are on-card in blue ink at the bottom of the card. Standard rookies are numbered to 249 while the upper tiered ones are limited to just 99. The '99 rookies' are extremely popular and can sell for thousands of dollars.

Inserts/Game-Used/Autos -
The Cup comes in a collectible tin. Inside is another smaller box that contains the 5 or 6 cards you get. The Cup is a hit based product, so just about everything you get in The Cup should be a memorabilia or autographed card. With a price tag of over $600, be ready to put a second mortgage on that house! 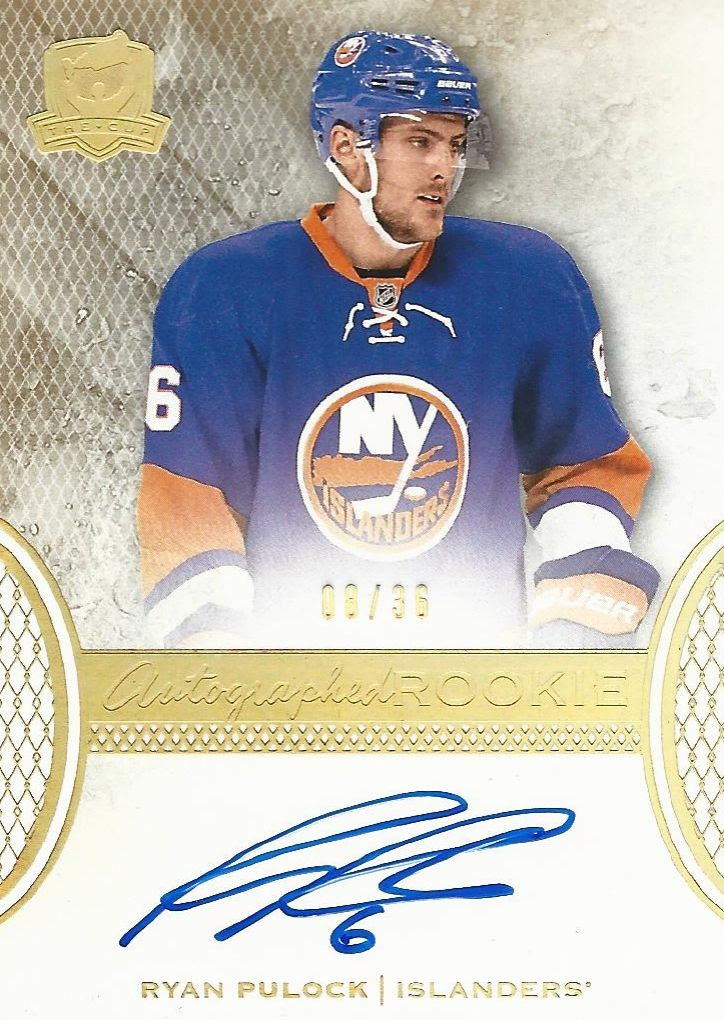 Expect all the cards in The Cup to be relatively low numbered with the autographs hard signed. This gold version of Ryan Pulock's autographed rookie is serial numbered to his jersey - a popular thing that The Cup has always done. I'm surprised that this card does not feature a gold border though. I think they used to do that with the gold rookie variants. 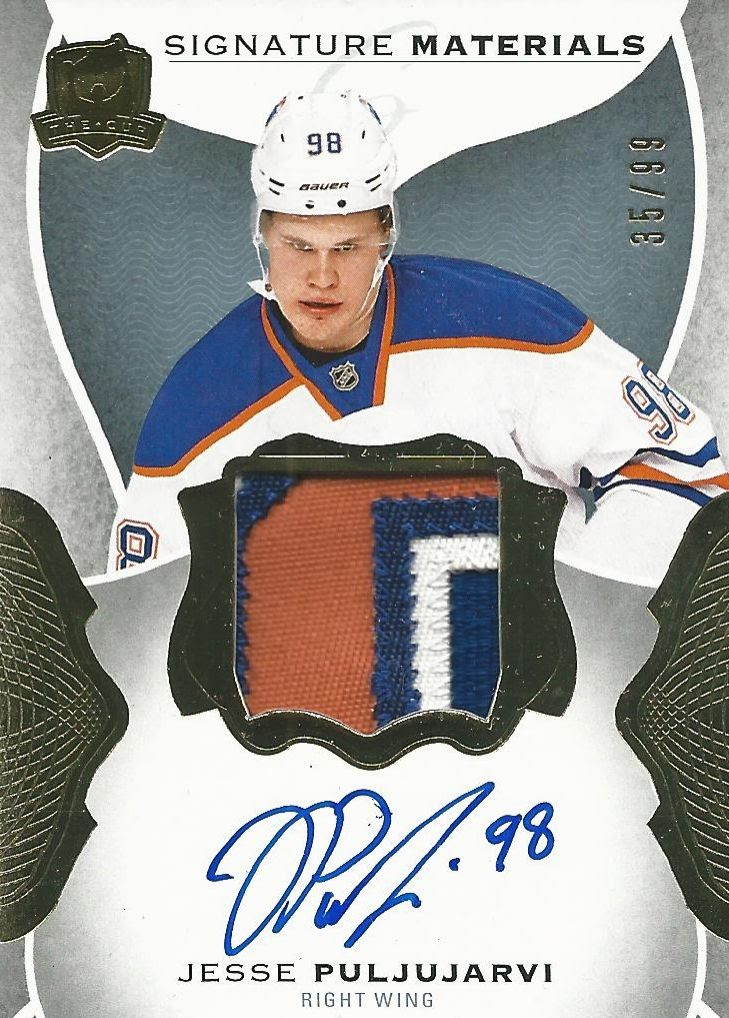 Sweet looking materials are a standard in The Cup. In fact, I really think you should be disappointed if you don't get a sweet looking patch in a Cup break. My best card out of the tin was probably this Jesse Puljujarvi. It's numbered to 99 and has a great looking patch piece in it. He's not the biggest rookie this season and is not a big star, so I'm a little disappointed that this was my top pull. 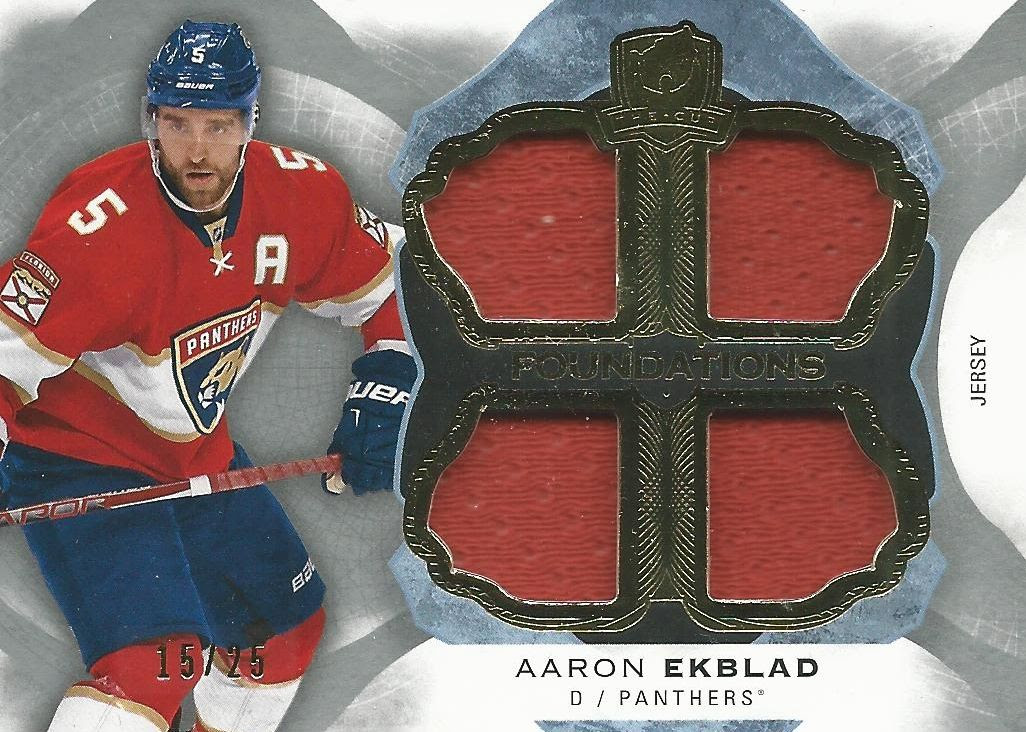 Getting jersey pieces out of a Cup tin is rarely exciting. I mean, they have jersey pieces in just about everything - so I don't consider them to be too special. This Ekblad quad is the lowest tiered version of this card. There are patch and autographed versions that are more rare and better looking. I'm not a fan of getting this type of card in my Cup break.

Sadly, there really wasn't anything amazing in my tin of the Cup. I've seen a lot of amazing stuff come out of this Cup already from online breakers. I can only afford one box of this product, so striking out is really a bummer!

Overall Rating -
I really do love the Cup... so while I didn't get anything great in my personal break of the product, I still think very highly of it. The good cards I've seen others pull show that the product has amazing things to get. This year's rookie crop has also been a pretty outstanding group - which means that pulling the amazing '99 rookies' and other associated cards can be very lucrative and special.

The Cup is not for everyone, but if it's something you can save up for or afford I would try and get it. This is a serious collectors product and is a ton of fun to open up. I say this every year, but it's true... opening up the Cup is an experience that I hope hockey collector gets a chance to do.

For those of you who can't afford a tin, you can 'build your own' by getting just the cards that you really want on the secondary market. Unless it's the huge rookie names, many of the great cards out of The Cup are quite a bit less than a tin would cost. If you're not the gambling type, I think that's the best way to go.


Check out my tin of The Cup: