It has been a long while since I've opened up a blaster of 13/14 Score. It's just not a brand that I typically go for. Score is a lower end product that gives collectors a large amount of cards, the chance of finding a hit are extremely slim. That being said, the cards are enjoyable and affordable for every level of collector. 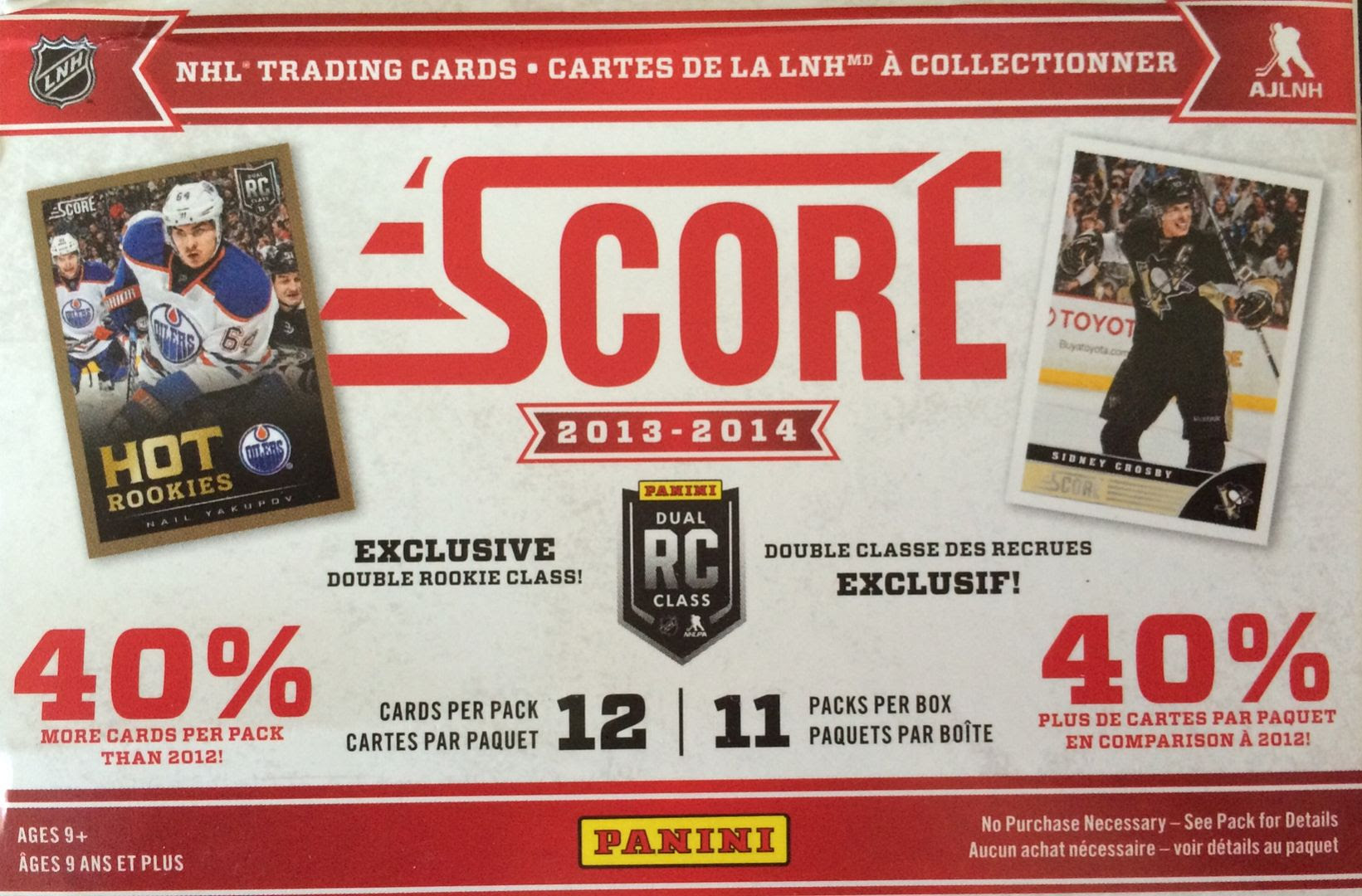 I was a bit surprised to see the $19.99 suggested retail price printed on the side of the blaster box. Twenty dollars is quite a bit for Score. There were years when Score had a printed value of about half of that! It must have been a shock to Score retail purchasers to see the price go up so much in 2013. But at least buyers did get 40% more cards according to the box. Hmm... 40% more cards for 50% more price. I'm not sure how well that adds up!

I'll go ahead and open this blaster up and see what comes out:

Review -
Taking a look at the cards, I remember now that Score did up their game when it came to the quality of this particular year's offering. The cards are glossier with nice foil elements. The photo quality of the cards is also better with a very distinct picture style. I guess that is what makes this year's price higher besides the amount of cards you get in a box.

I guess I can see that from Panini's perspective. They do give collectors a product that is better... but I'm not sure if it is worth it to collectors collecting at this lower end of the card spectrum. If it were me, I'd be fine with the quality from previous years if the price were kept lower.

In terms of the cards themselves, I found that there were some interesting collation patters in the packs. For example, a Shark would show up as the third card in the pack on multiple occasions. I think if you open up enough of these you'll get a better feel of how these cards were packed in.

The following three were my favorite of the bunch: 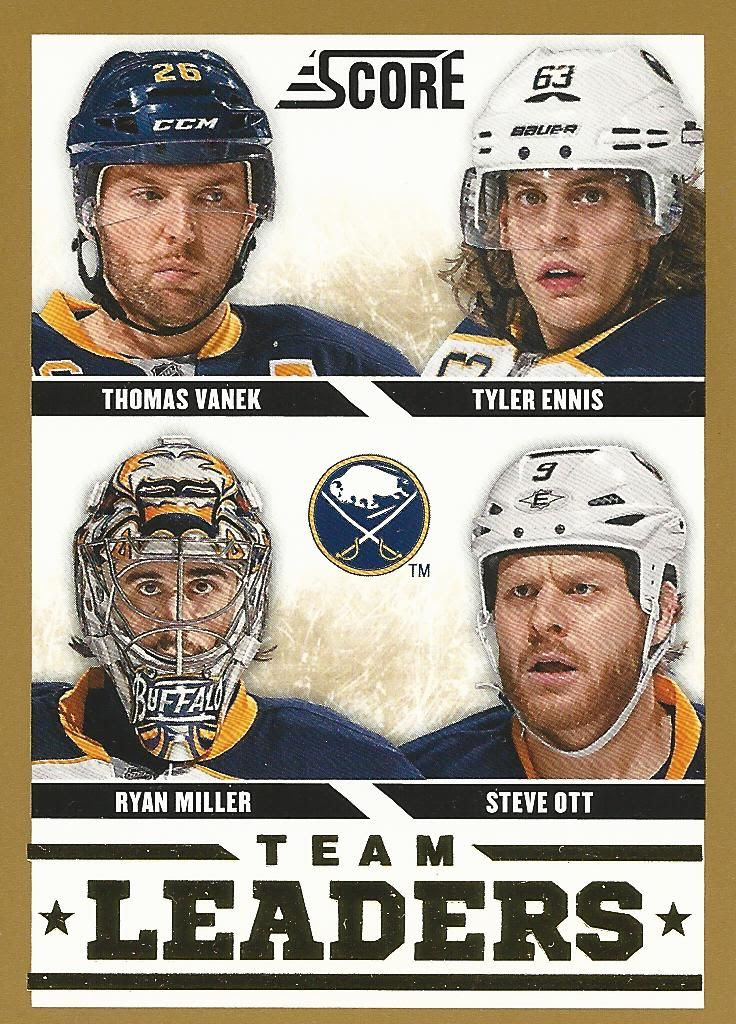 #3 - Vanek/Ennis/Miller/Ott Card No. 553
Only Ennis on this card remains on the Sabres! I picked this card because I think the design of the Team Leaders was nice this particular year. This version is the gold bordered version that came one per pack. 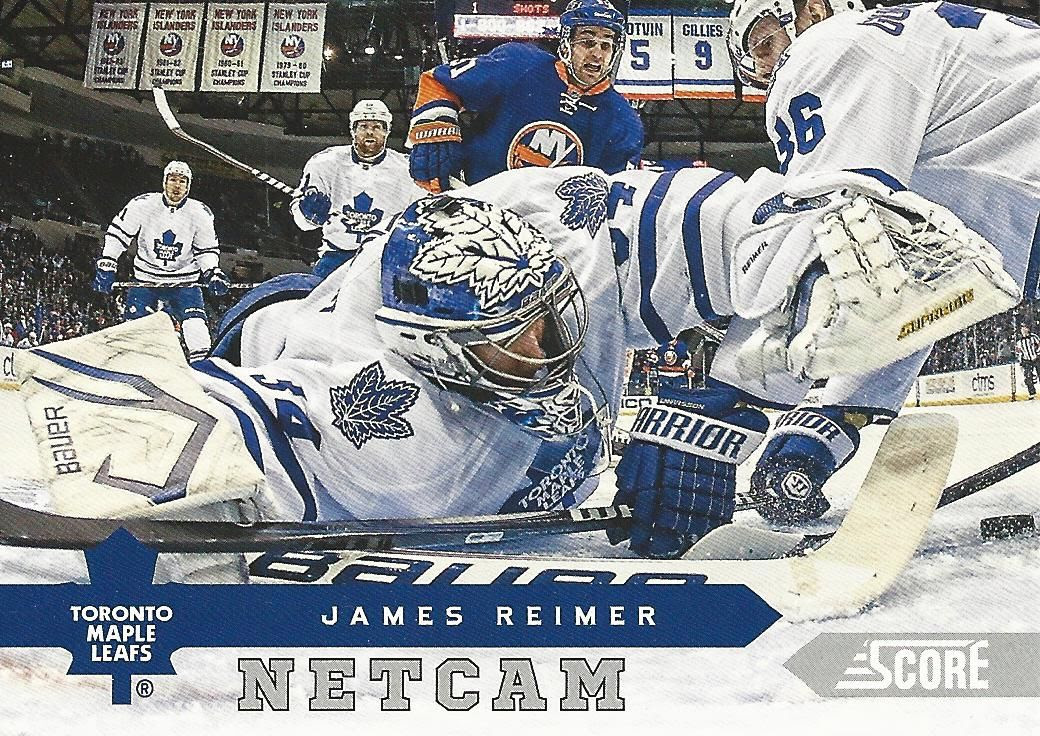 #2 - James Reimer Card No. NC-8
This is a great action shot of James Reimer in net. The net cam cards can be a mess sometimes, but this is one of the better ones that I've seen. 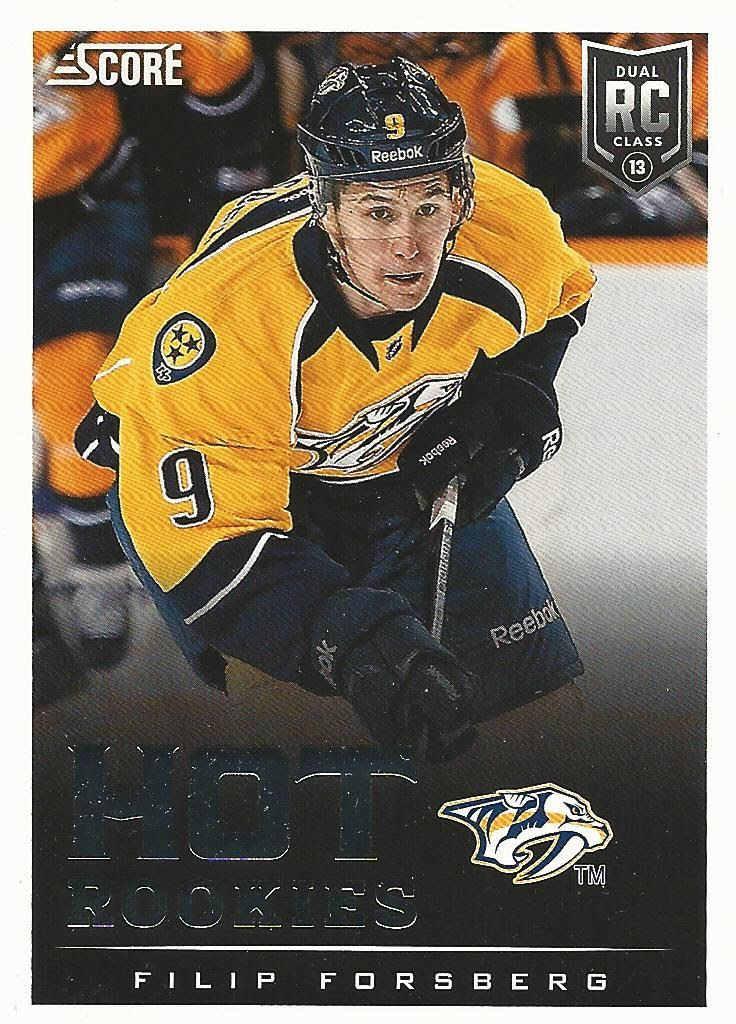 #1 - Filip Forsberg Card No. 630
Forsberg was one of the best rookies to come out of the double rookie class year. It was nice to find his Hot Rookie RC here in this blaster.

Overall Value -
Score is what it is. Nowadays you can find this 13/14 version for a good bargain - much better than its stated asking price on the box. This particular year's Score is a good buy because of the quality of the cards. I think most people, myself included, have forgotten that Panini put a good deal more effort into making these cards better. If you are looking to pick up some Score, this year is not a bad one to opt for!

Look for a new episode of Retail Review every Sunday!
Posted by luke. at 8:13 AM