The thing that I really like about Zenith is that a hit is guaranteed to be a blaster. The only bad thing about that is that there really weren't too many quality hits to be found in Zenith. It was probably one of Panini's strangest releases when it came onto the hockey scene back in 2010. I've always had mixed feelings towards Zenith, but let's take a look into a blaster box of it today and see what comes out!

You've probably seen me open up blasters of Zenith on Retail Review before. This will be a quick break with only three packs to see. I'm not even sure why they put packs in these. If you've ever spent money on one of these you'll know that of the three packs one will have a hit. Usually one is all base and the other has an insert in it. Unless there is something terribly wrong with their collation this will be the case. Opening up the packs won't really get you any surprises. In reality, Panini could have just put all the cards in one pack or even in just a plastic case or something. My guess is that for the price point it works out to about ten bucks per pack. It's better to say that a blaster box has three packs rather than just one.

Let's open up this predictable break and see what type of hit I get:


Review -
Obviously the thick pack was my hit. Sometimes there's three thin packs... which means an autographed card or a blaster that is shorted. Often times the jersey card is a Winter Warriors card, but not this time!

As I predicted, one pack had a hit, one an insert, and the other was all base save for a retired player card of Darren Pang. The one surprise that I got was an extra parallel card to go along with my hit. I thought that was a nice little extra for me in this break.

Here were the top three cards from the blaster: 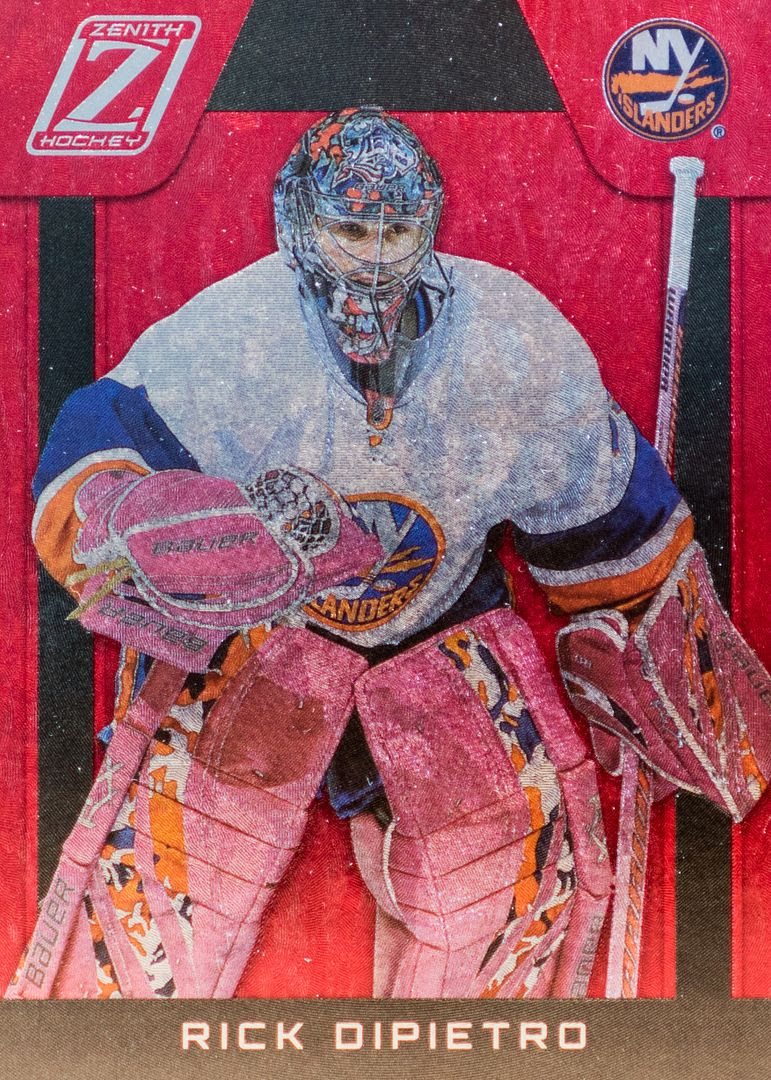 #3 - Rick DiPietro Card No. 88
This was my extra insert card - a Red Hot foil parallel card of Rick DiPietro. I'm no fan of DiPietro's, but I like that he has pink pads on. It goes well with the red foil of this card. 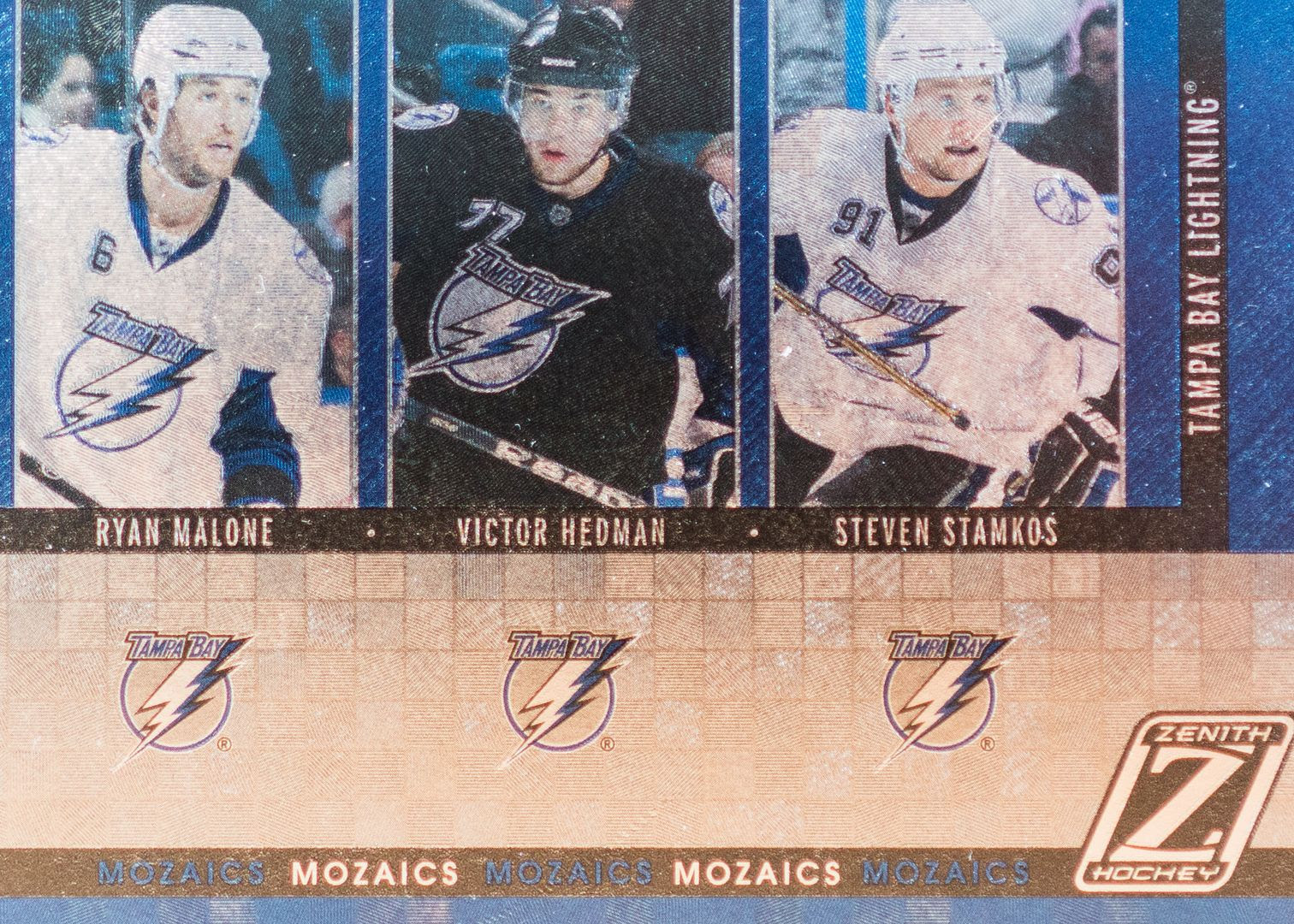 #2 - Malone/Hedman/Stamkos Card No. 17
These foil Mosaics insert cards look very nice in person. I love the textured foil look where the Tampa Bay logos are. These cards come in jersey and non-jersey versions. I think I would have preferred this one to have the jerseys rather than the one I got. 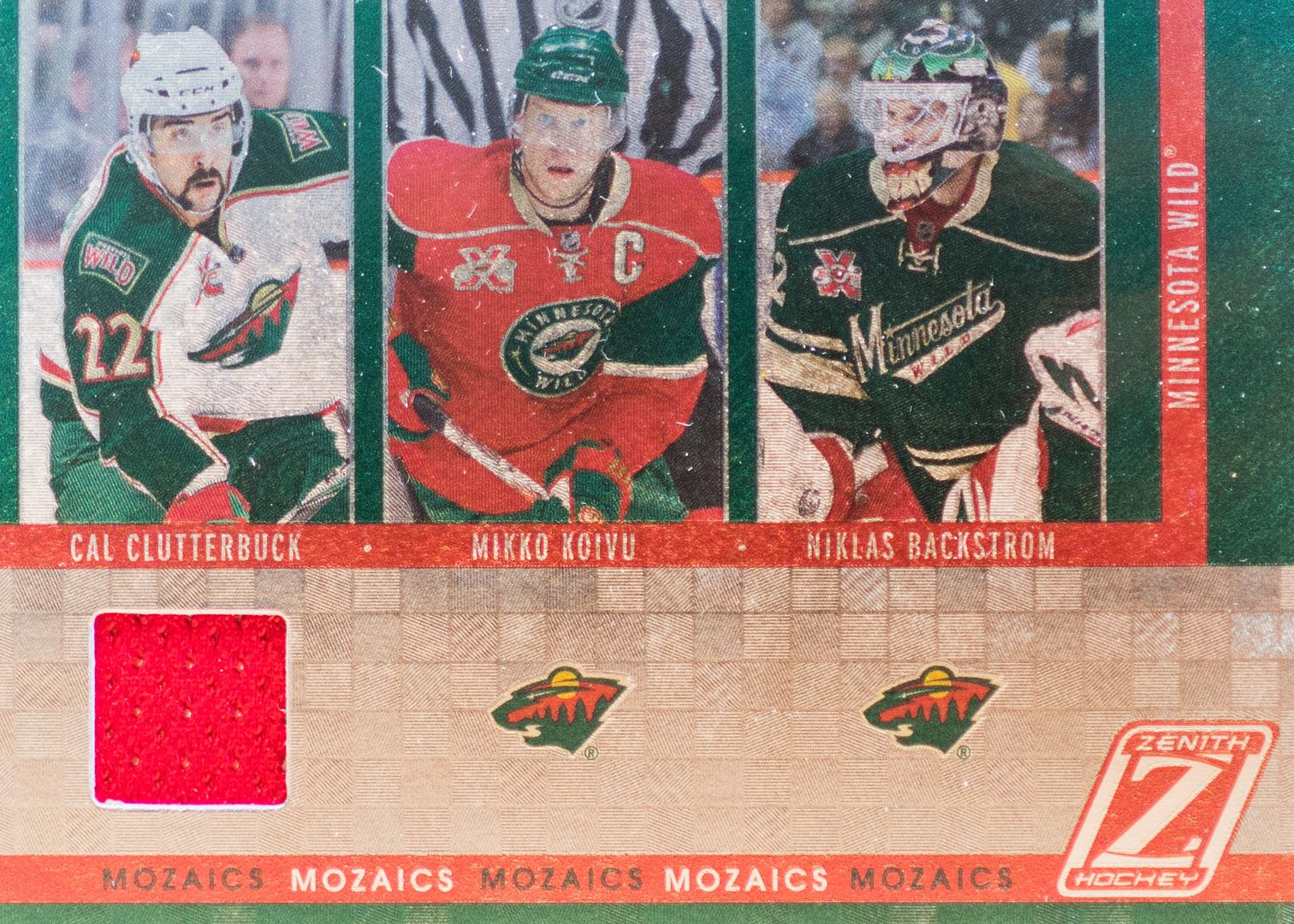 #1 - Clutterbuck/Koivu/Backstrom Card No. 11
If you put three players on a card, there should be memorabilia for each! It's so weird that this card only has a jersey piece for Cal Clutterbuck. That ain't right! This card still gets top spot because it's my only hit.

Overall Value -
At around 10 dollars Zenith isn't a break that will break the bank. I really like the fact that you get hits in every blaster... but the quality of the hits tend to be lesser rather than greater. I still have a lot of fun opening up this product for some reason though. It certainly has grown on my a little even though it has absolutely no reason to.

Look for a new episode of Retail Review every Sunday!
Posted by luke. at 7:58 AM