I know I've opened these blasters before, it's just it's been so long I've totally forgotten about them. 2010/11 Pinnacle has been a very popular break for me, so why can't 2011/12? I'm excited about this blaster because it straight up says that there is a guaranteed memorabilia or autographed card in the blaster. I can't wait to see what it is! 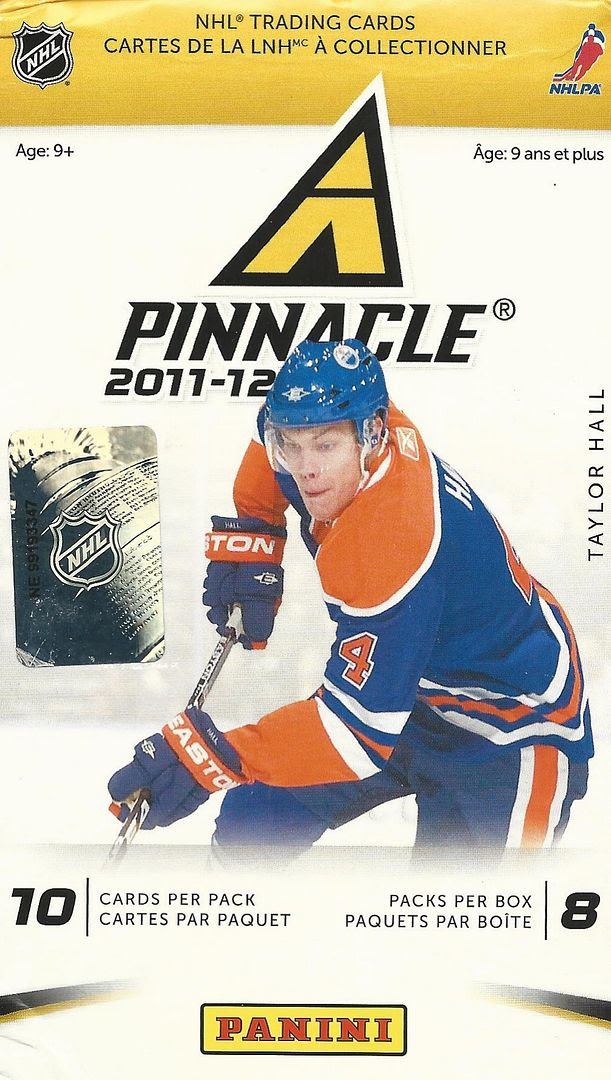 This blaster box design is a bit more subtle than the bold black and yellow packaging of the year before. Panini toned it down quite a bit, but it does still look very good. I think it gains a bit of class in the design approach for the box. I like the white scheme. It goes well with hockey and the yellow secondary colors still connect it to the Pinnacle brand.

Similarly to last year, collectors get a good number of cards in this break. I'm expecting not only a hit, but at least a few inserts and parallel cards as well. Pinnacle has always had a nice mixture of both. At under $12, this blaster was a great deal. I will have to pick up some more soon!

I'll go ahead and open this blaster to see what's inside:

Review -
This blaster was just as good of a break when compared to its release the year before. The first thing I noticed about the packs was that they were all relatively thick. Panini really jammed a whole bunch of cards into each pack. Though all the packs were thick, I could still tell which pack had the memorabilia card in it. That particular pack was bulgy and tight - as if one of the cards contained inside were thicker than the others.

The cards themselves are very nice - especially the photos. Panini did a great job with Pinnacle in this way. Also awesome were the inclusion of the Nufex foil cards. These foil cards don't just have a foil sheen, but a textured look that is very unique. I pulled two Nufex cards in the blaster as well as some other inserts. 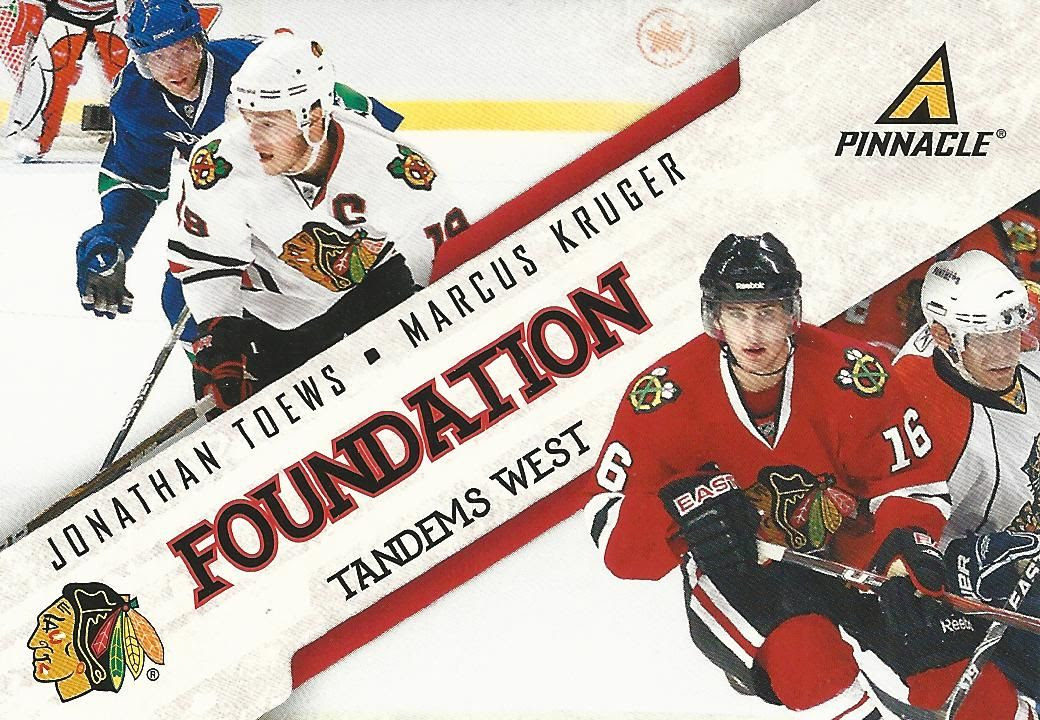 #3 - Toews/Kruger Card No. 2
Card companies like to put young newcomers with veterans, and this Foundation card is a good example of that. You have an established star like Jonathan Toews alongside Marcus Kruger. 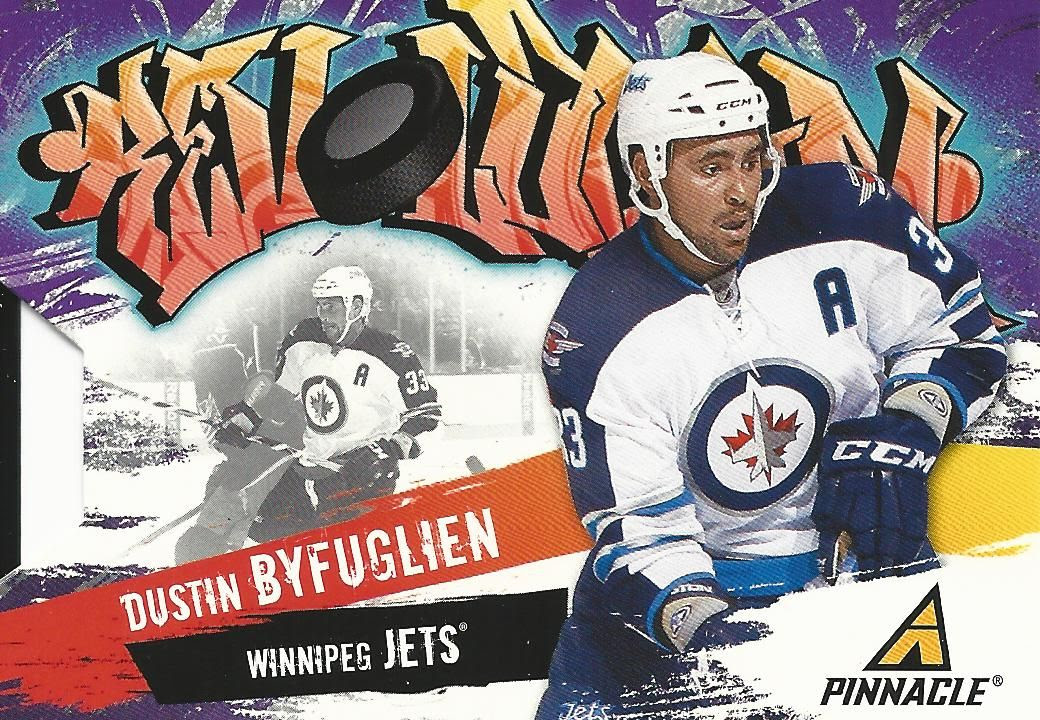 #2 - Dustin Byfuglien Card No. 7
This is my favorite looking card out of the break. The name of the card is difficult to make out, but I believe it says Revolution. This card reminds me of something out of the 90's. It's a fun look that I wish were done more today. 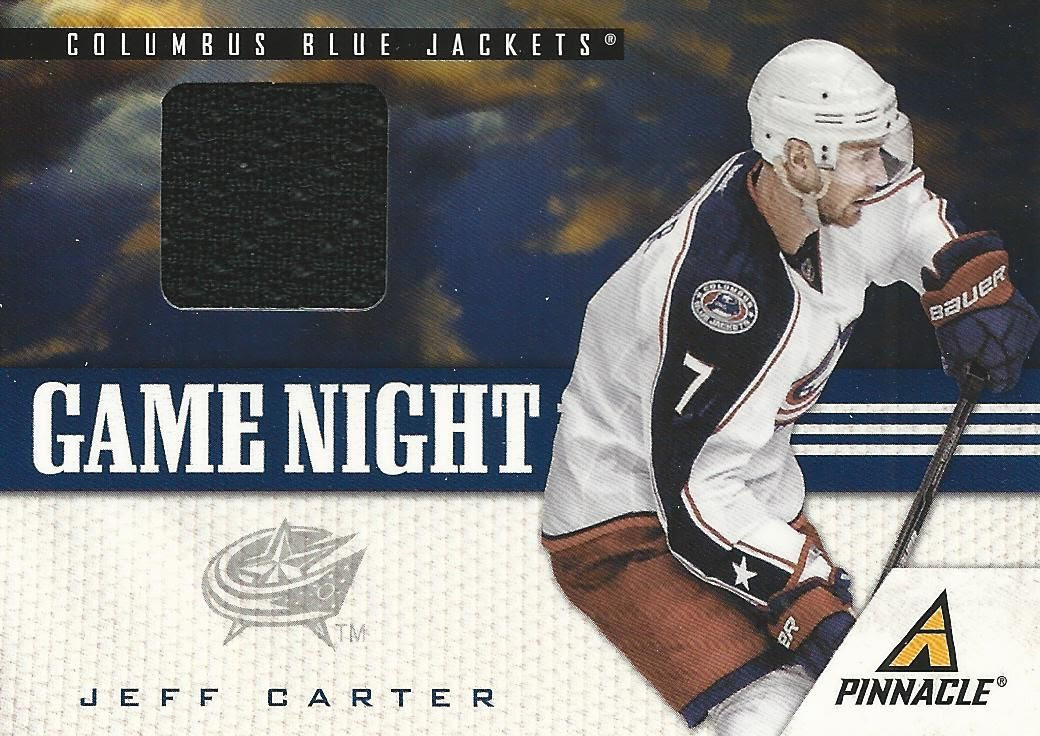 #1 - Jeff Carter Card No. 13
The hit out of the blaster was this Jeff Carter jersey card. I'm no Jeff Carter fan, but I am a fan of getting hits! So that was the number one card out of my break. Sadly, this card wasn't serial numbered like the jersey cards that were inserted in 10/11 Pinnacle.

Overall Value -
I'm just a big fan of Pinnacle at the retail level. It gives collectors great cards to look at, nice looking inserts and parallels, and it also gives out a hit! I certainly recommend it to anybody looking for a nice break at a good price. I'm going to try and open up another blaster of this real soon!