Every so often I like to take things back a bit, and today is one of those times! This box of jumbo packs is over 20 years old! Crazy! It's an old box of Upper Deck Series Two. I remember buying these packs when I was younger. This set was actually one of the sets that got me into hockey card collecting. It should be a really fun break! 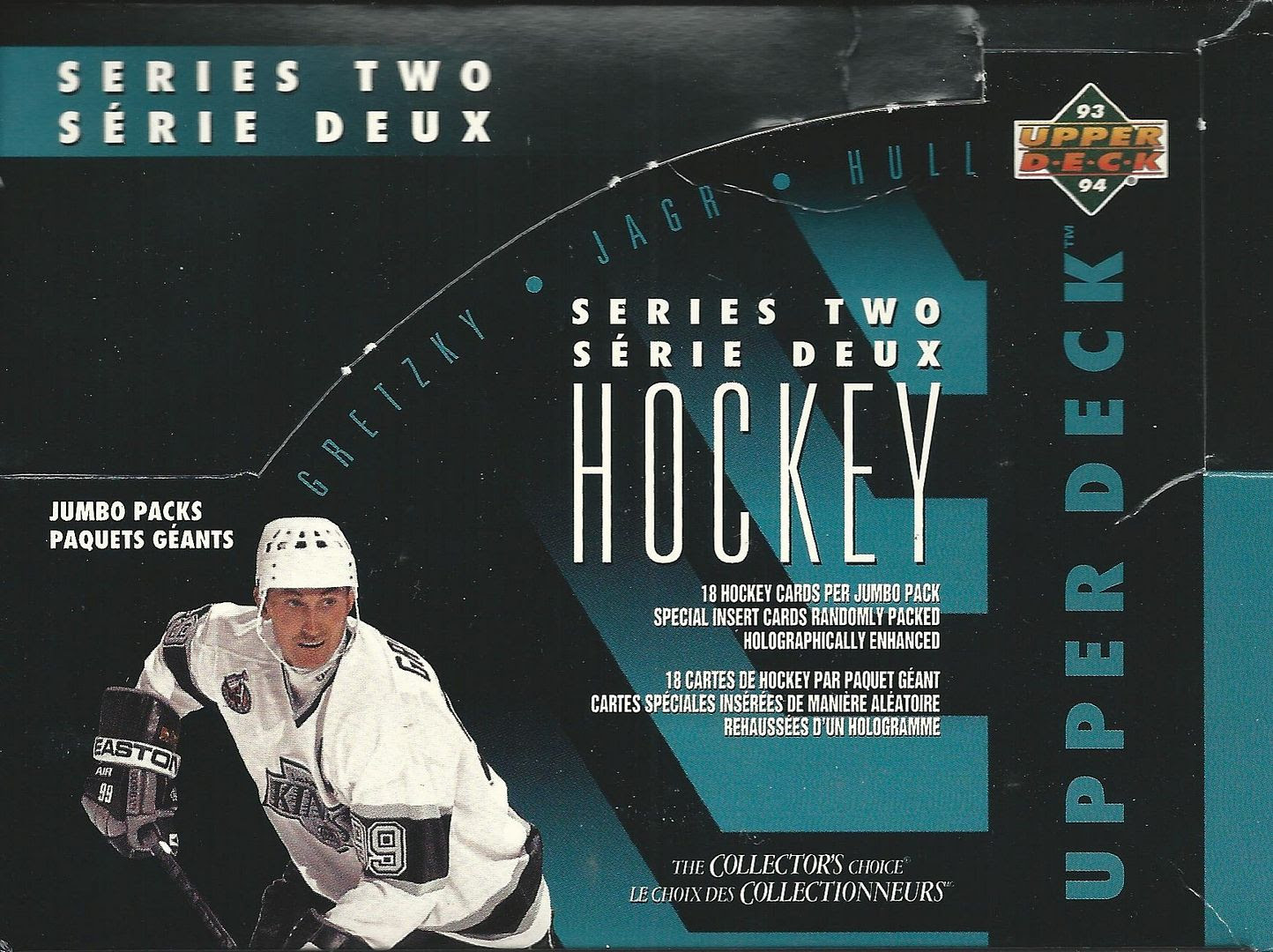 Boy has the price of these packs gone down! I'm pretty sure these jumbos were around $5 a pop when they were new. Now they you can get the whole box for less than three packs back then. Inflation? Hah! Of course, they did print a zillion of these cards so no wonder they are so easy to find and so cheap to buy.

Each pack has 18 cards in it. Back then the set was very large, so getting a complete set was a challenge. There are no hits to be found in this box, but you can find inserts and subset cards. I used to LOVE the Silver Skate inserts. Are those even an option to pull out of a jumbo pack? I'm not sure, but we'll find out soon.

These cards are finally seeing the light of day in over two decades:

Review -
Like man old school retro breaks, this break took quite a bit longer than the usual blaster. When you bought a box of cards in the 90's, you had to be ready to sit down and sift through a lot of cardboard. Being so old, the gloss that was on these cards stuck together. It made going through these cards rather difficult. I just opened the packs as best I could and saved the tedious job of pulling them apart for later.

I was pleasantly surprised that I got 2 Upper Deck SP cards per jumbo pack. This was a set of cards that I adored. It's still one of my all-time favorite sets. They are colorful with beautiful photos. To this day Upper Deck still releases cards based on this design.

The Wold Junior Championship cards brought a little something different to the table. I enjoyed their full bleed look, it's just too bad not too many of them were very good.

Sadly, there was no Silver Skate insert card in this box. I would have loved to get one, but I'm ok with not receiving one, maybe they just weren't packed into the jumbos.

Here are my top three cards out of this old Upper Deck box: 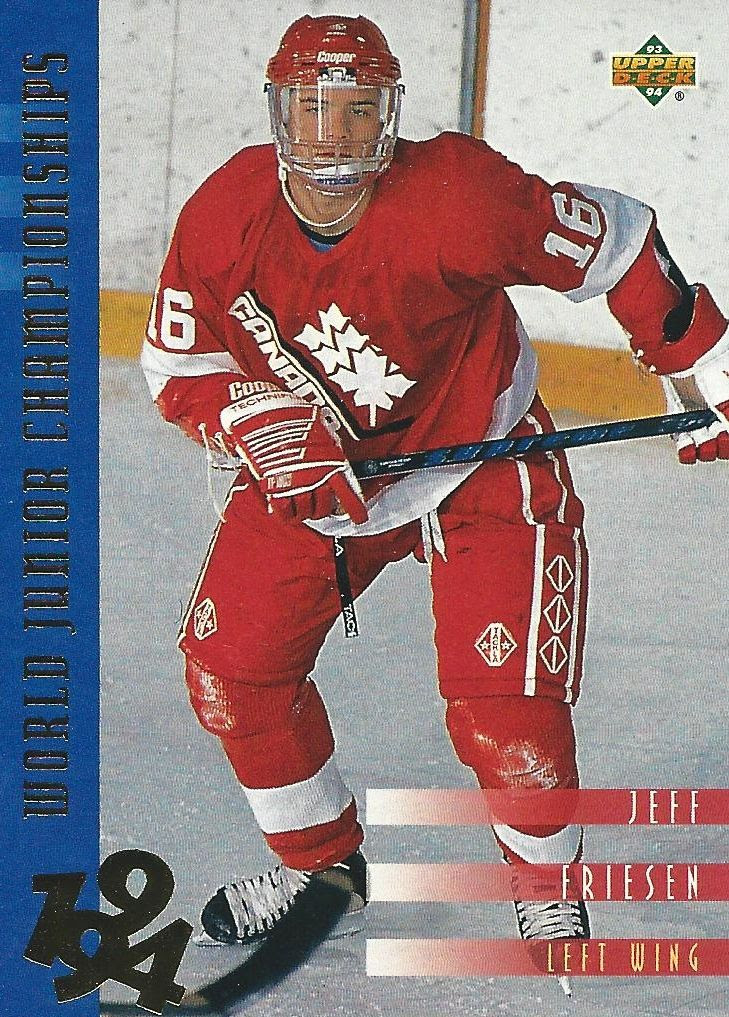 #3 - Jeff Friesen Card No. 532
I guess I have a thing for Sharks players with the number 39. Jeff Friesen was a Shark with that number and so is Logan Couture. I had a little collection of Friesen cards as a kid. It's funny to see this card out of the box today and be reminded of him. 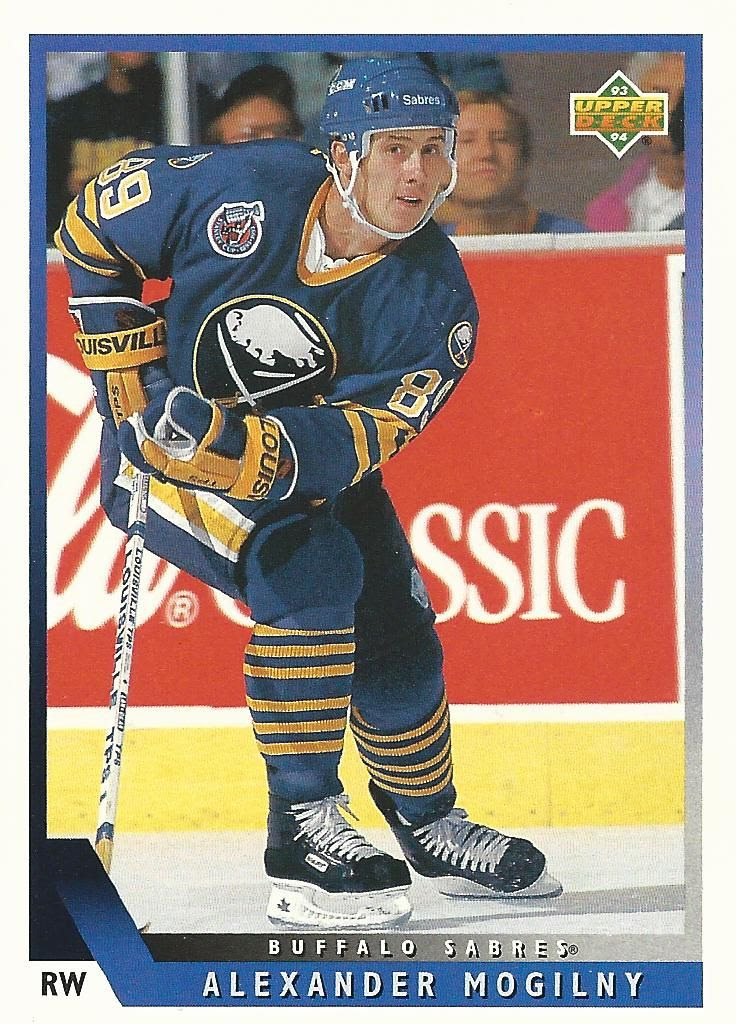 #2 - Alexander Mogilny Card No. 488
Alexander Mogilny was a favorite player of mine because of his amazing ability on the old NHL '93 video game for the Sega Genesis. I loved playing with the Sabres and he was one of the best players in the game. 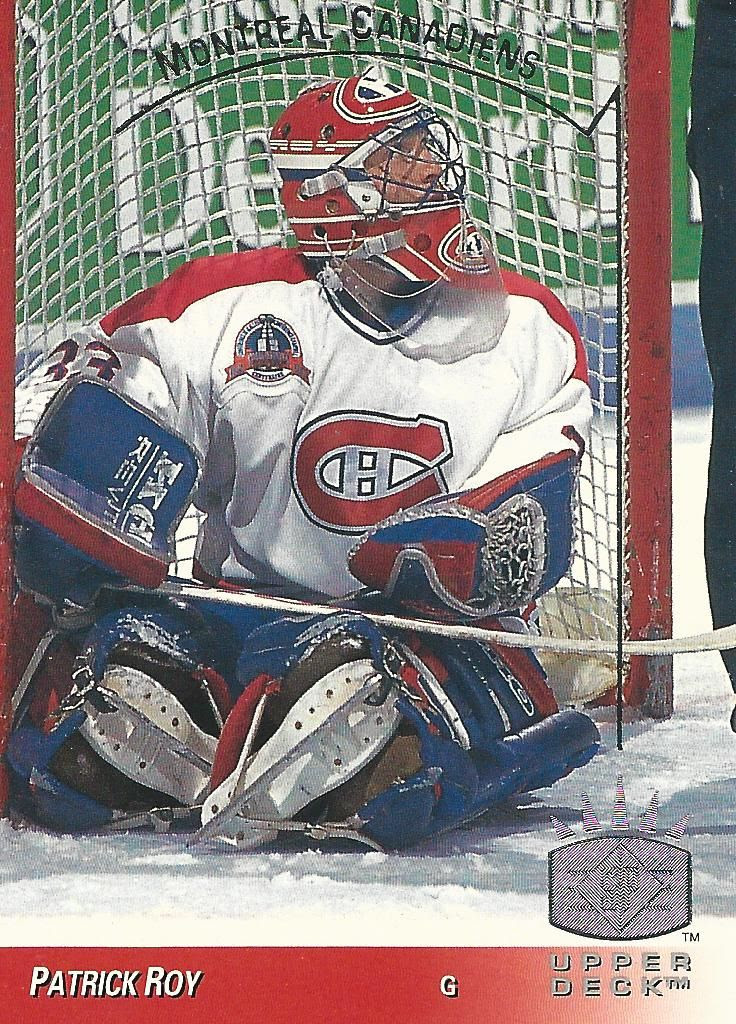 #1 - Patrick Roy Card No. 81
One of the best goalies of all-time on a great looking card. This was always one of my favorite cards from the SP set. I had a few of these as a kid. It's funny to get to pull this card again so many years later.

Overall Value -
For just under $11 you get a nice trip down memory lane. The cards from this era still look very good. It's just too bad they didn't have hits back then. I would say the designs rival that of cards today. The simplicity and elegance of the cards cannot be denied. A modern collector might not fully appreciate this break, but I certainly did. It was a lot of fun and was glad to see this set once again.