I did pretty well with my last blaster of Goodwin Champions so I'm encouraged as I give another box a try. My last blaster had a jersey card of Igor Larionov in it. I was really excited to get that! Chances are I won't be so lucky again, but let's give it a go anyways! 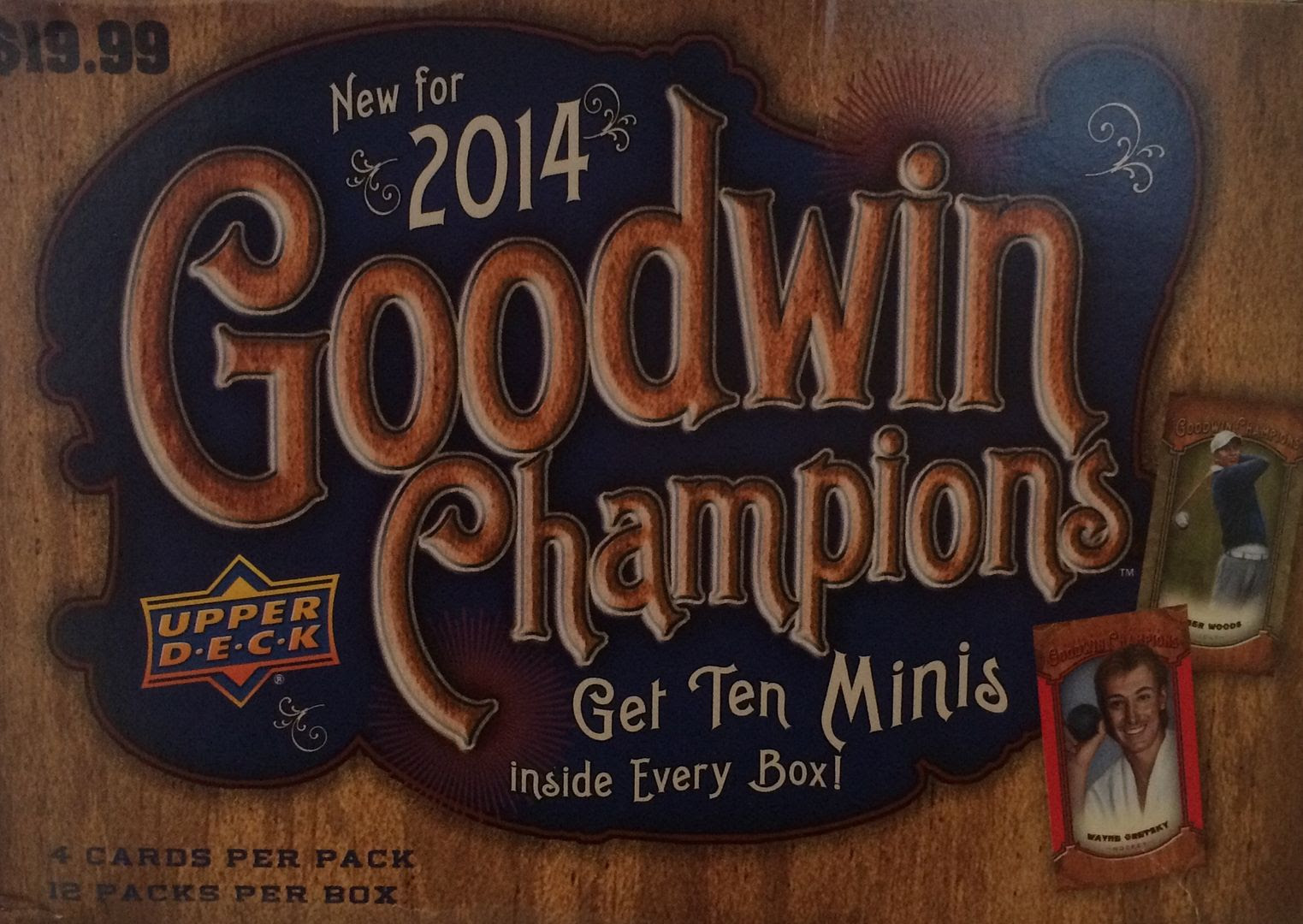 I'm always hopeful when I break a blaster of Goodwin Champions because the kind of inserts and hits you can find can be very, very good. Goodwin has cards from just about every sport - including hockey - so it's a fun buy. I tend to focus the money I have in hockey, I don't often get a chance to open packs with players from other sports. Goodwin gives me that opportunity while still having hockey players in it.

As a bonus to all of this, Goodwin cards look really great to me. I love the artistic renditions of the players depicted on the cards. I find the pictures to be unique takes on the player's personality. It's just a lot of fun to go through a blaster of Goodwin Champions. If you haven't gotten one before, I'd definitely recommend it.

Let's break this blaster open and find out what's inside:


Review -
This blaster was a ton of fun to break. I loved looking at all the cards. With 12 packs per blaster, there was plenty to see. In the blaster I got quite a few mini cards. Some years give you 6 minis per blaster but this one guarantees you 10. I counted only 9 minis in this box, but I did get a hit so I'm not too worried about it.

As you could see in the break there was a wide variety of different sports as well as history portrayed on the cards. I find it really fun to read about people who I don't know too much about or who I've never heard of before. It definitely widens my perspective on the greater sports world.

Here were my favorite three cards from this break: 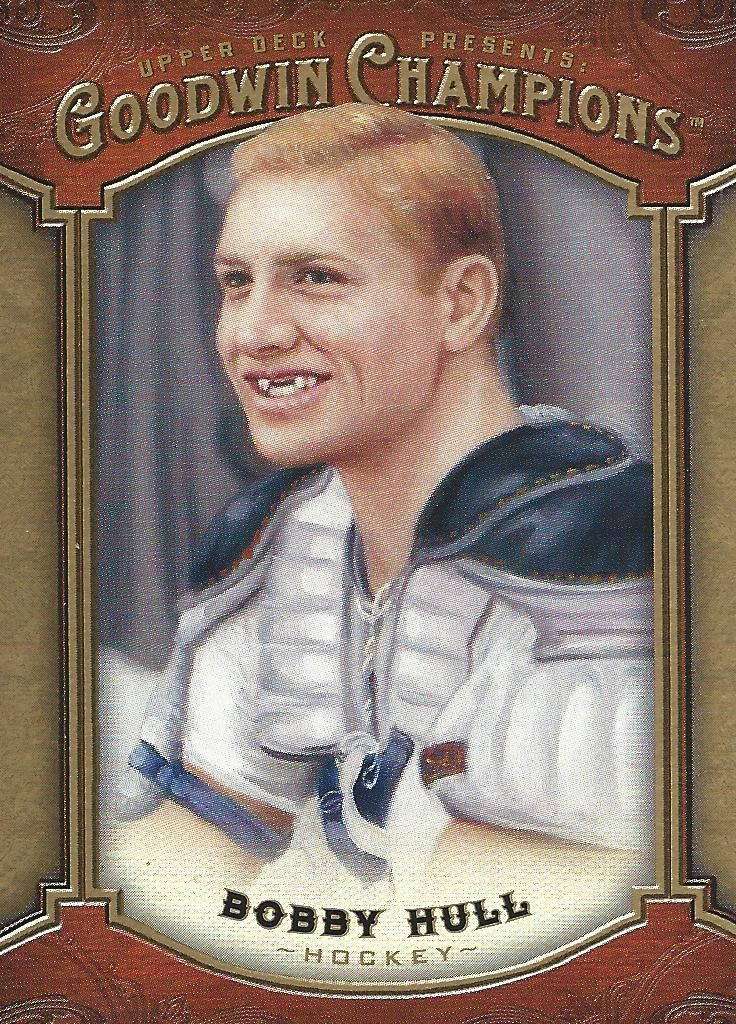 #3 - Bobby Hull Card No. 12
I just really like this card because it shows Bobby Hull with all his missing front teeth. This is such a normal thing for a gritty old school hockey player like Bobby Hull. 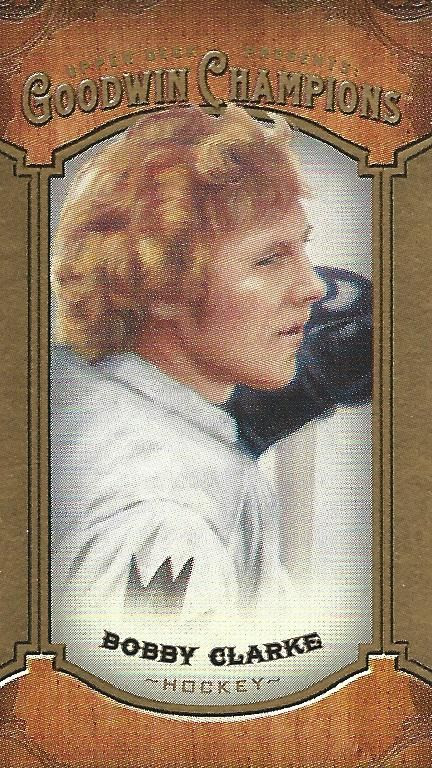 #2 - Bobby Clarke Card No. 111
I got a bunch of mini cards but I really liked this one of Bobby Clarke. Like Bobby Hull, Clarke is an NHL legend, and it's always fun for me to get cool cards of NHL greats. 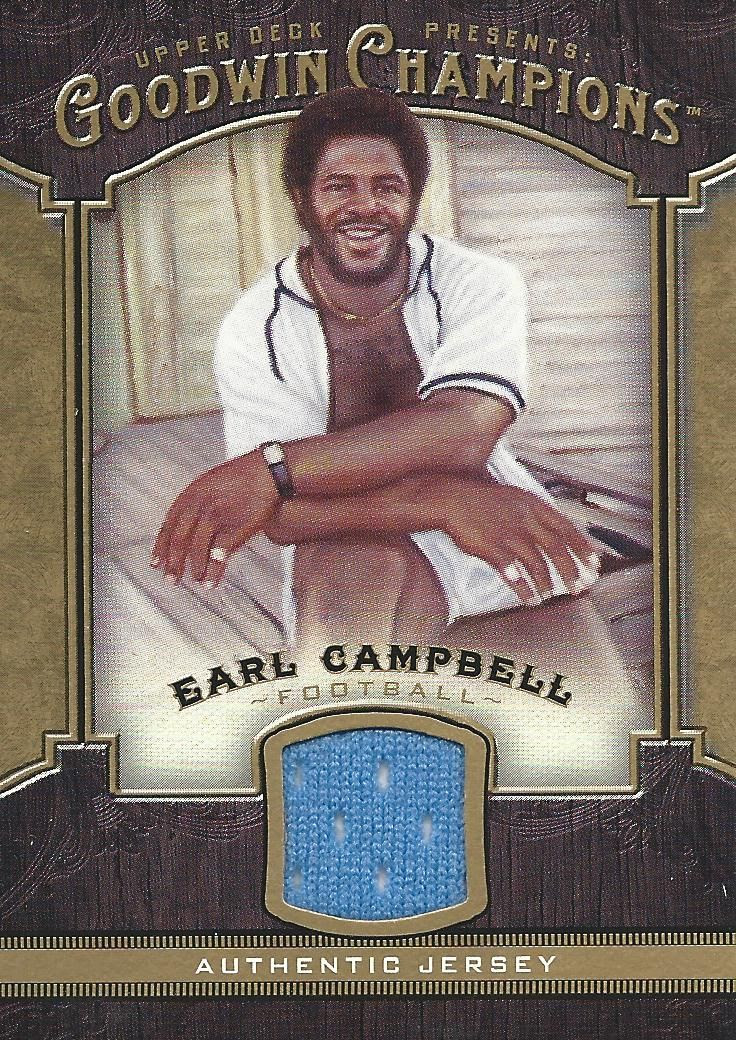 #1 - Earl Campbell Card No. M-EC
My hit this time wasn't of a hockey player, but I'm still very glad to pull it. Earl Campbell is a retired star from football. I've heard of Earl Campbell before and have seen people pull his cards. This is my first nice pull of his and it makes me want to check out his accomplishments on the field.

Overall Value -
For under ten bucks this was a stellar value. It was awesome to get a whole bunch of mini cards and even more awesome to pull a hit of a great player. I would say not to overlook Goodwin Champions when you see it at the store (retail or hobby). It's a great set of cards and worth your time to check out. Get some of it if you see it for a good deal!

Look for a new episode of Retail Review every Sunday!
Posted by luke. at 7:34 AM