I am a big fan of Ice for a couple reasons. One, it's always a very slick, good looking set. Two, it contains rookie cards without an autograph or memorabilia on it that can still be worth A LOT if you are lucky enough to pull one. Ice is one of the most unique sets that Upper Deck produces and is a collector favorite. It was discontinued for a few years, but has returned to the delight of hockey collectors. 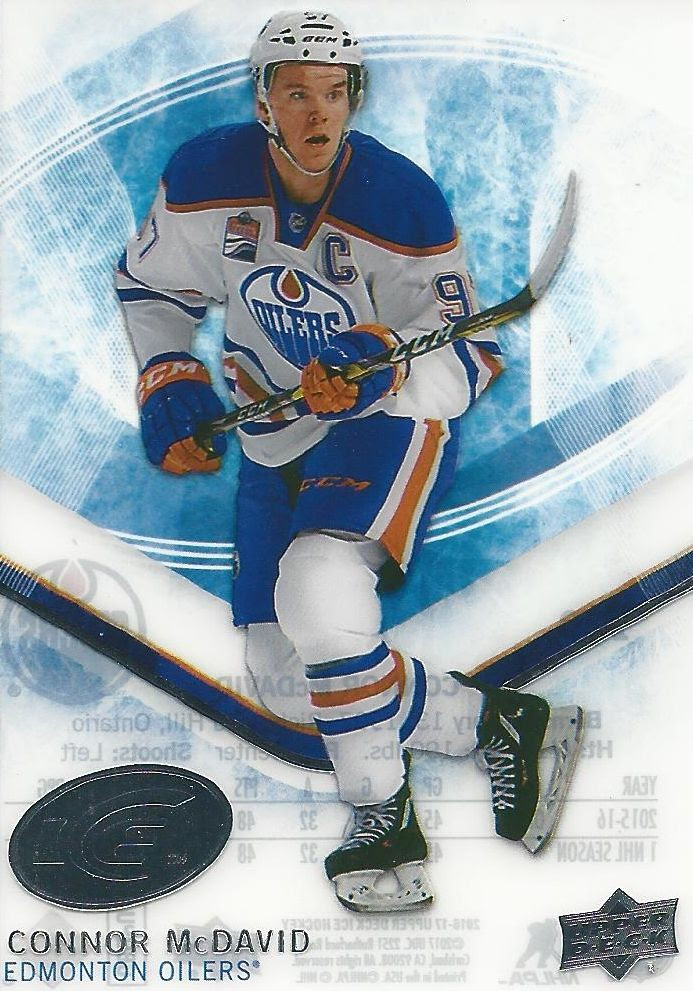 Base Card Design -
Ice base cards are all done on acetate. This has been the trend for the set these past few years. The cards are well done and the acetate design fits with hockey very well. The clear part of the card reminds collectors of the elemental nature of ice. The bottom half of the card has a white/blue design that further emphasizes this. Each card is also adorned with silver foil that highlights the Ice logo, Upper Deck logo, and player name. The player image is large and fills up a good portion of the card. Overall the Ice cards have a classy and clean look that collectors will enjoy. 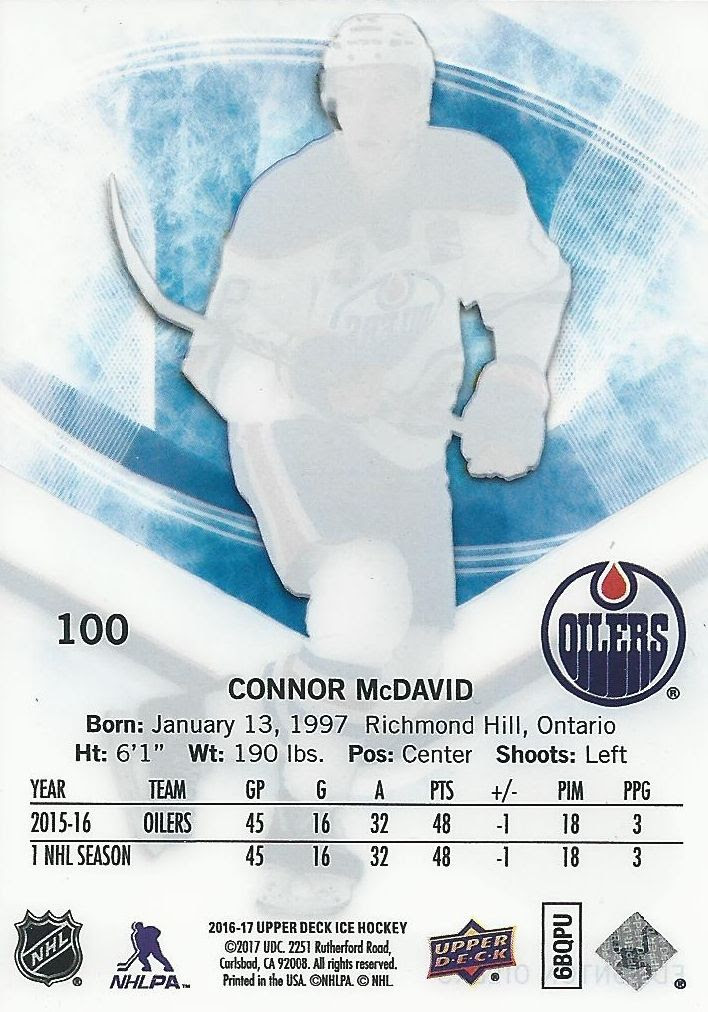 As nice as the acetate looks for the frontal design of the base cards, it's always a problem of the back as it limits the space for Upper Deck to print on. All of the necessary information is located at the very bottom of the card. There is only one line of statistics that gives the previous seasons totals as well as a career total. And I'm not sure if it's just me, but I feel like the card numbers on the back look generic or out of place in a way. 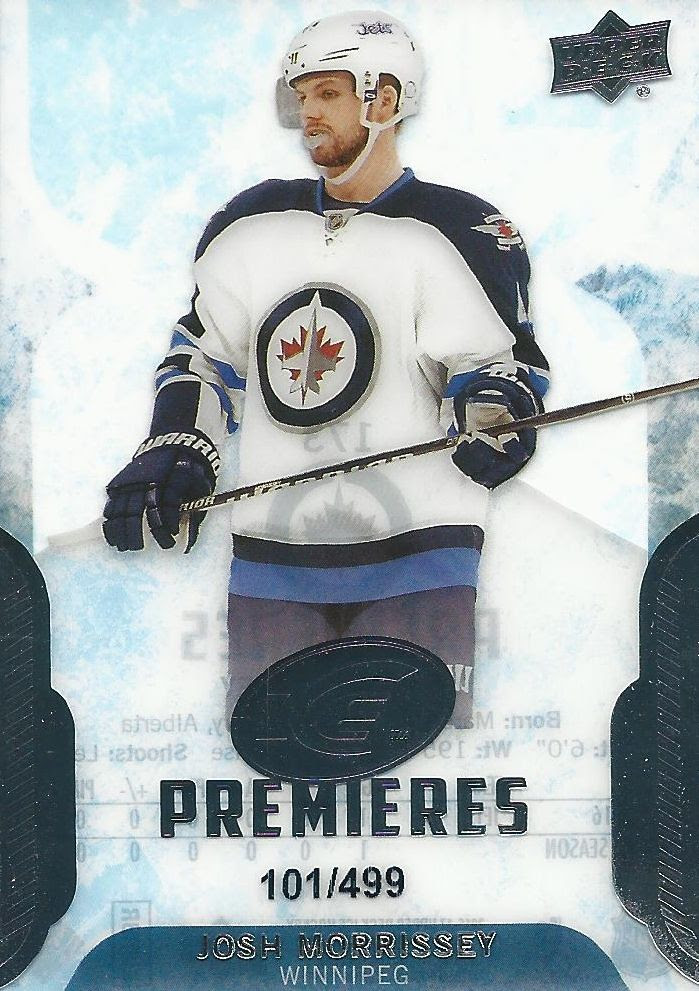 The Ice Premier rookie cards are one of the biggest draws in Ice. Well... as long as you pull on numbered to 99. Those particular cards are worth their weight in gold! Getting those top tier rookie cards is pretty rare though. I have actually never pulled a 99 rookie myself. The rookie cards this year adds some foil to the borders of the card and has more of an ice look behind the player. These Ice Premiers don't stand out too much. In fact, they could be mistaken for base cards in my opinion. This year's design isn't on par with what they had been in the past. Of course that won't affect the values too much, but I would have liked a better looking card.

Inserts/Game-Used/Autos -
Boxes of Ice only contain six packs... and there are only 4 cards per pack, so you don't get a ton of cards here. The cards are of high quality, though, and you are guaranteed 1 hard-signed autograph and 1 memorabilia or Exquisite card per box. You can also expect 2 Ice Premier rookies as well. 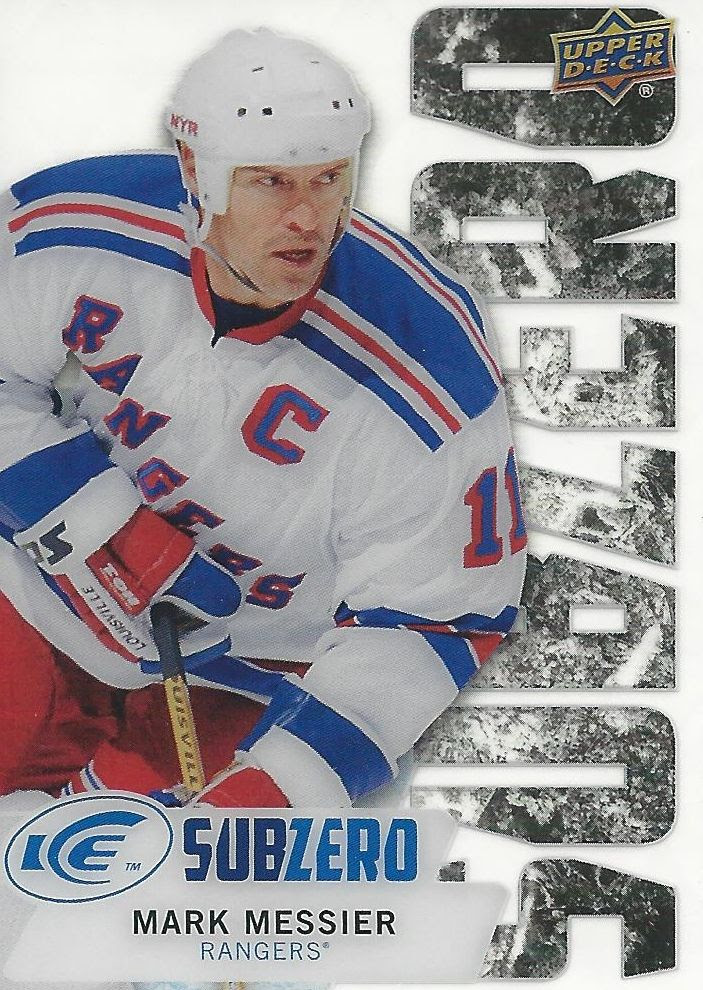 I got two Sub Zero insert cards in my box of Ice. One was of legend Mark Messier, and the other was a Rookie Sub Zero card of Anthony Mantha. It was cool that Upper Deck put actual insert cards in the product to vary up the set a bit. Sometimes I feel as though inserts cards have gone the way of the dinosaur. These insert cards are nice in that the player image is large and the acetate as a rainbow look to it. 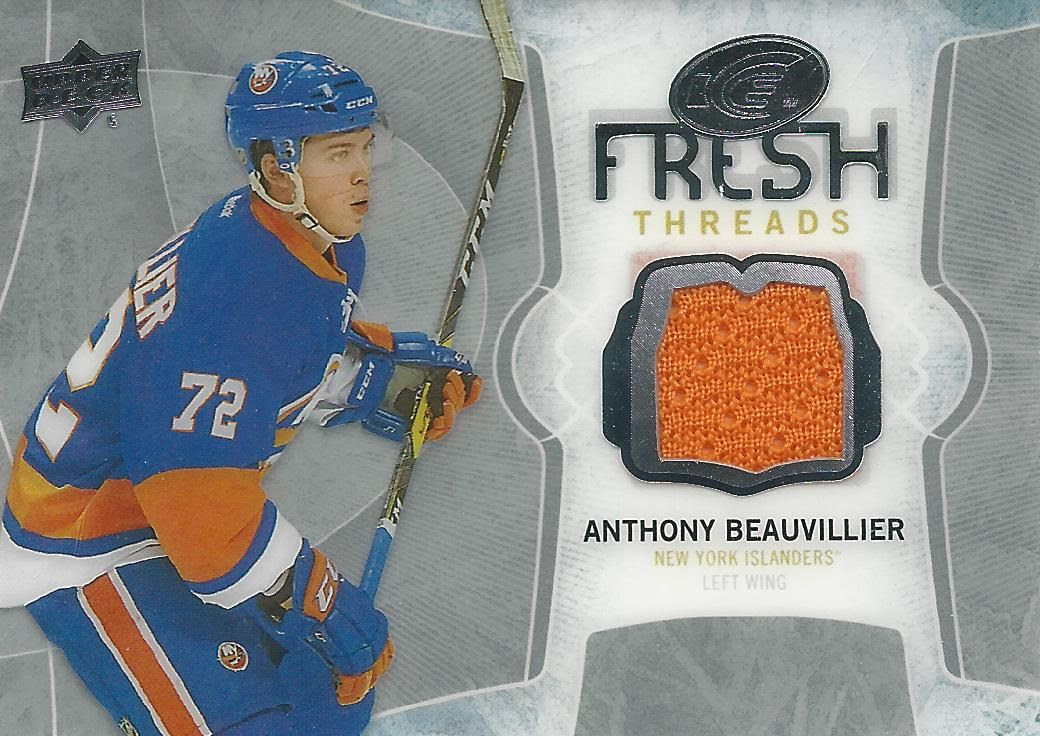 My box came with a memorabilia card rather than an Exquisite card. It's a small swatch jersey card in which the memorabilia piece came from a rookie photoshoot. It certainly isn't the best memorabilia card to get. It's actually one of the worst to get as Ice does contain some very nice patch cards. In terms of the card's look though, it's a nice looking card. I like the colors of the card, and the orange swatch definitely makes the card pop a little. 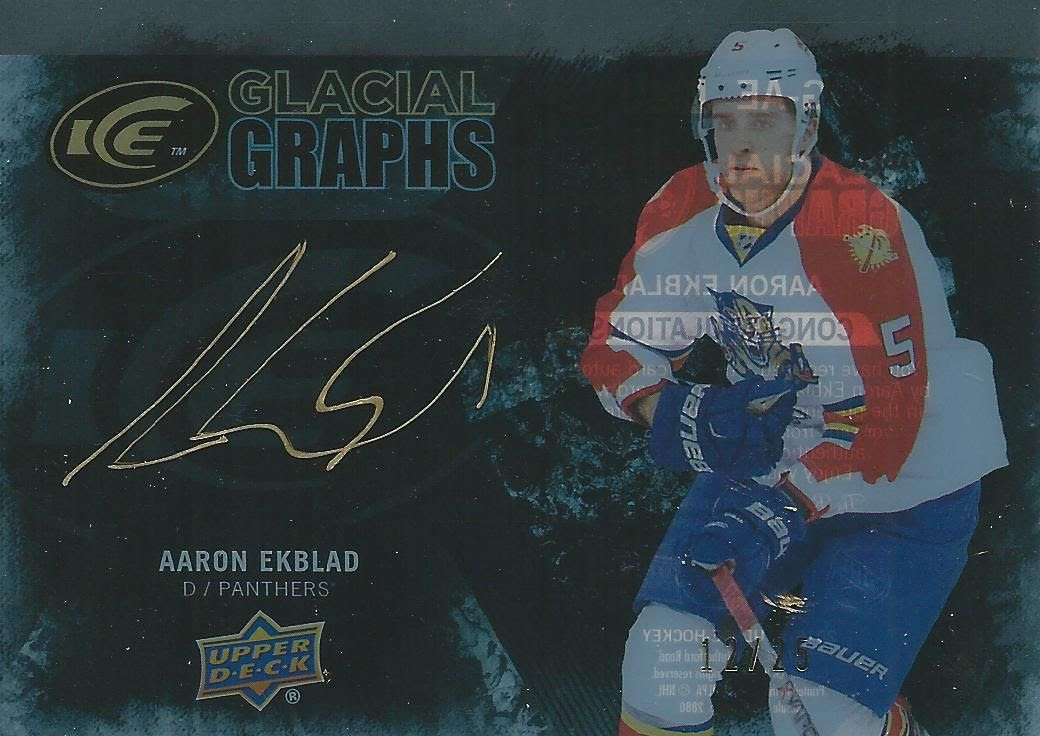 The best card of the box was the autographed card. It is a hard-signed Aaron Ekblad Glacial Graphs card. The Glacial Graph is very dark with a signature done in gold ink. That really made the autograph stand out quite a bit. The card is also numbered to only 25, so there aren't many copies of this card! My only complaint of this card is that the back of the card does show through to the front on the player image. That messes up the sweet look of it somewhat.

Thankfully, I got everything that was guaranteed in this box, unlike when I opened up a box of SPx earlier this year. There are some really awesome cards to be found in boxes of Ice. Most of those cards are pretty difficult pulls though. I'm sure you'll see those come up on the secondary market for a good chunk of change really soon.

Overall Rating -
For about a hundred dollars you get a pretty nice stack of high quality, well-made, hockey cards. Ice is a great looking set with some real potential to pull something worth a high amount. I really enjoyed my break of Ice. If I had to pick a recent product to buy more of... it'd probably be this one. Ice does a good job with its cards and I think this set will be popular with collectors.

Getting 2 hits and 2 rookie cards per box is pretty good for the current state of the hobby. Unlike many other products out there, there is a chance to pull one of the best rookie cards of the top rookies in the game today.

I'd recommend Ice as it is both a good looking set and a set that you can find great cards. Upper Deck has a solid product here!


Check out my box of Ice: