Upper Deck's Trilogy has always been an interesting brand for me as it has always sat in a unique part of the hockey card spectrum. When it came out, it was one of the higher-end brands... but not quite at the level of Upper Deck's big guns in Ultimate Collection, Premier, and The Cup. It was a notch below, but still above brands like Artifacts. Now it looks as if Upper Deck has brought it closer to the mid-range territory with a price to match. 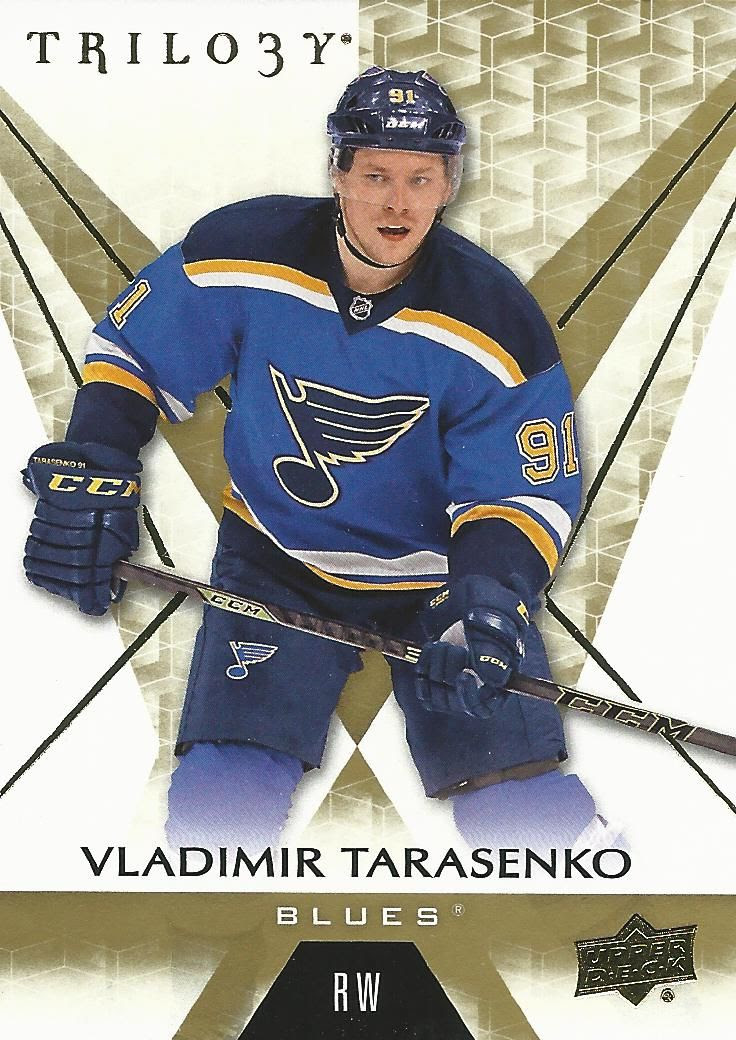 Base Card Design -
The Trilogy base cards are on a nice glossy stock. Gold foil is used as accents nicely around the card to help it stand out. Each base card has a predominantly white and gold color scheme with a large photo of the player in front. Looking closely at the card, you'll notice many lines and patterns in the background. It's a dynamic look for a card, and collectors for collector that enjoy a busier look, these might just be up your alley. Though the cards don't really have a flaw to them, I do not find the design to be particularly memorable. They're nice for what they are, but I'm not sure I'll remember them specifically in a few years. Trilogy isn't a set that collectors clamor over the base, they're just there to fill the packs around the hits mostly so for that job they're doing a great job. 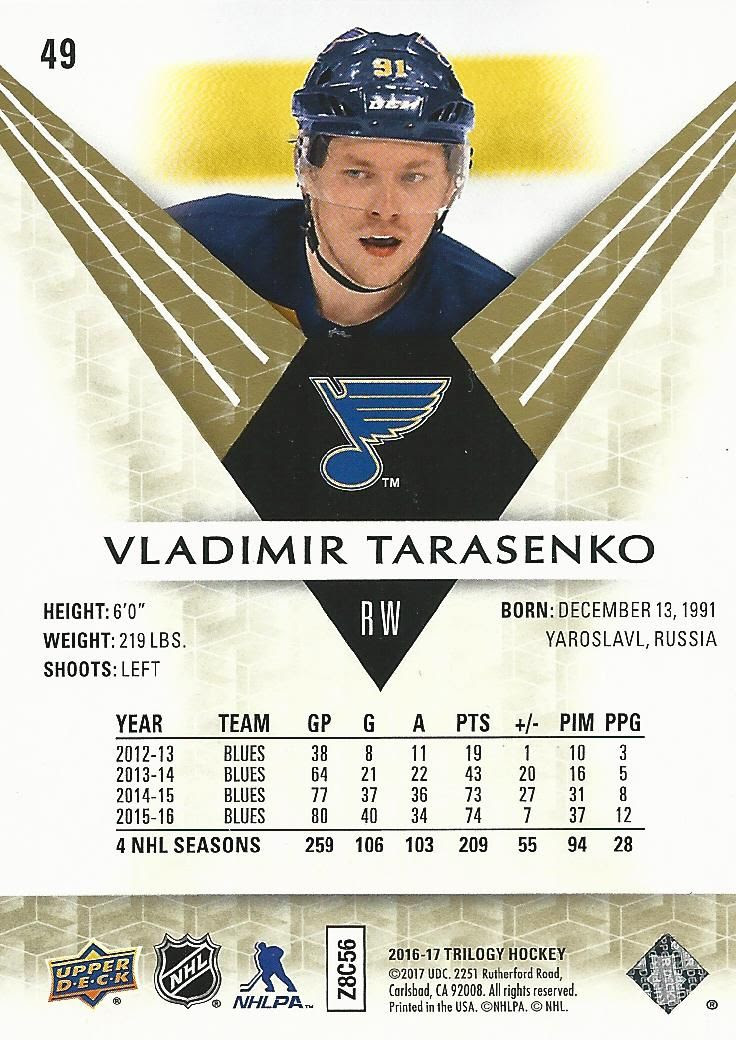 The back of the Trilogy base cards share similar design elements as that of the front, but it comes off looking rather generic. Upper Deck's other releases this year have generally been better crafted than these. These cards just have the relevant stat information on a cookie-cutter like design. There is not paragraph to read about the player so there isn't much interest generated here. 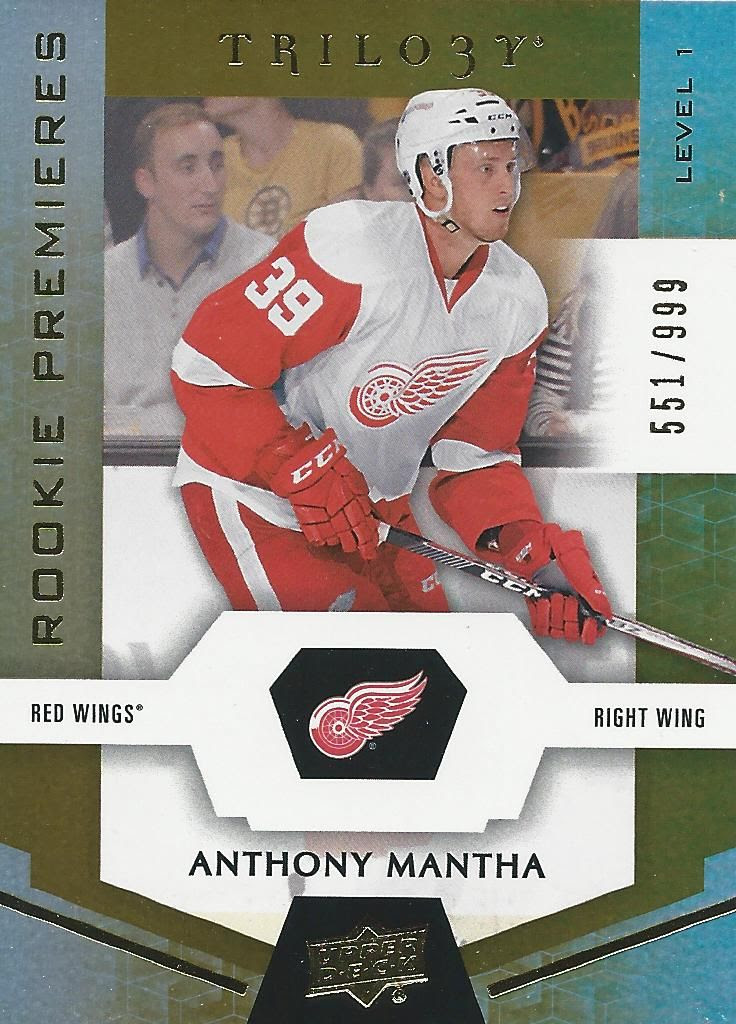 The rookie cards in Trilogy are called Rookie Premieres. The set comes in three tiers, but I'd consider the most basic card the main rookie with the other tiers are more inline with an insert or parallel card. Rookie Premieres are completely foiled cards numbered to 999. The design has a few elements in it that are a call back to the standard base, but it'd be hard to tell with a quick glance. Overall these rookie cards are well done. I think collectors will enjoy the shimmer and shine of these cards, especially compared to the other cards in the main set.

Inserts/Game-Used/Autos -
Each box of Trilogy comes with 8 packs and run a little over $100. To me, it's very similar to what you would get in Artifacts, but with hits configured in different designs. Collectors should expect to find around three hits in the box. The rest of the packs should have at least an insert/serial numbered card beside the base cards. 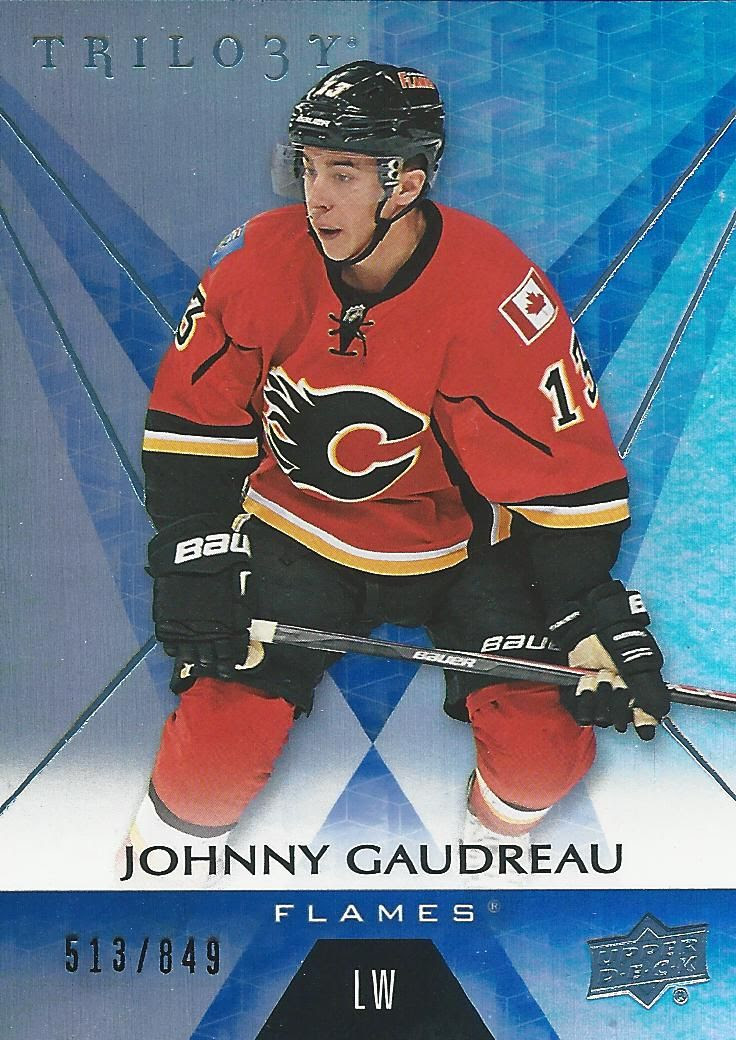 I got quite a few of these blue rainbow foil parallel cards in my box. These cards parallel the base set and are numbered to 849. The foil is a good look for these cards, and it improves upon the standard base card by a good amount. Black and green parallel variations are also available as are printing plates of the base set. 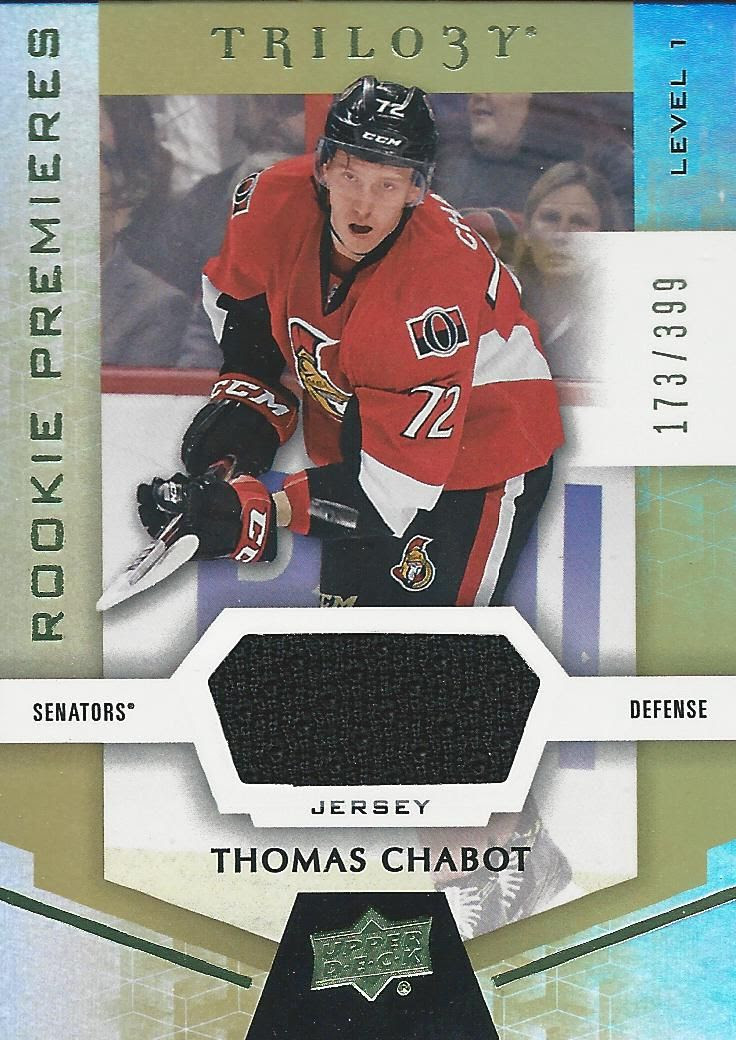 Numbered to 399 was a jersey parallel of a Rookie Premieres rookie card of Thomas Chabot. It's a simple card with an embedded event-used piece of jersey. These aren't too exciting to get, even if you pull a top rookie. 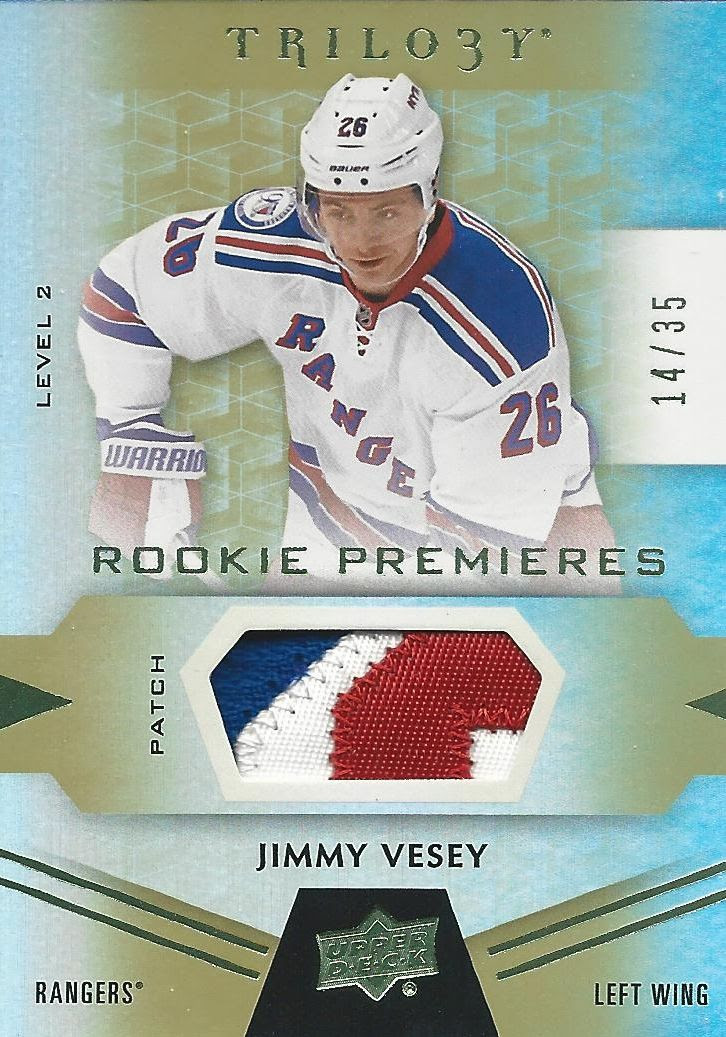 The higher level patch variation of the Rookie Premieres are much nicer than the jersey variation that I showed above. It helps that the patch I pulled was very nice with many colors and breaks. This patch card comes on very thick stock and is numbered to just 35. 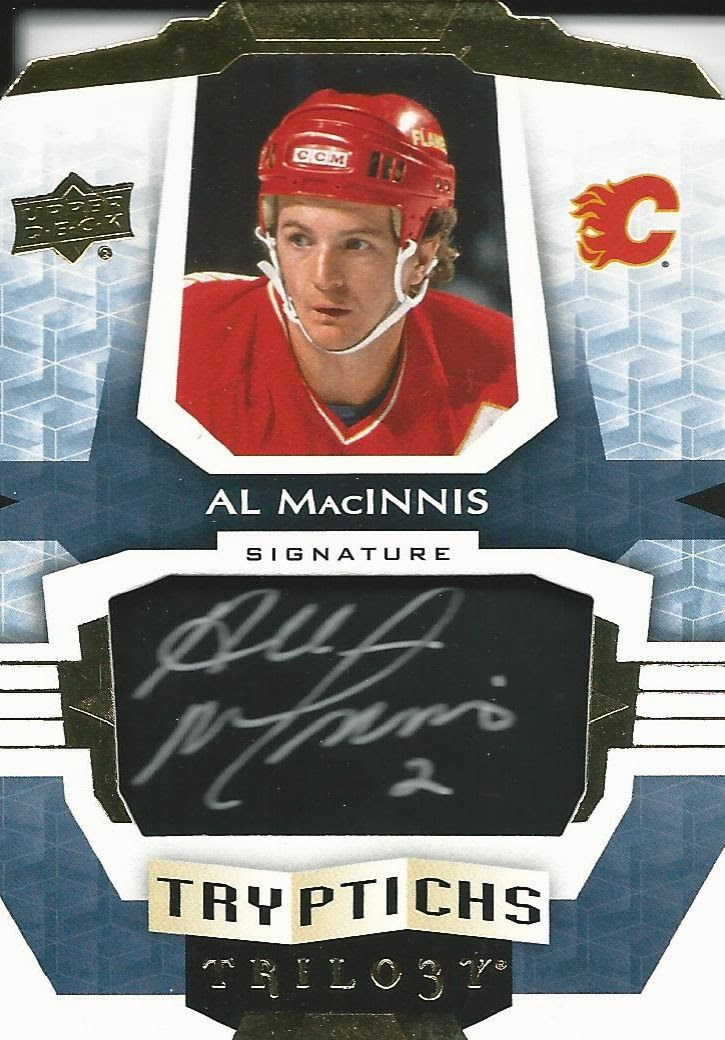 My favorite looking card of the break was a Tryptichs autograph of Al MacInnis. These cards come on very thick stock. The autograph is done on black and embedded in the card. It almost looks like a little chalkboard in there. It's serial numbered to 60, but different cards from the set will have different numbering.

Though I didn't get one, Signature Puck cards are back. Trilogy also features much more autograph content and memorabilia content. Like they've done in past years, collectors can also find rookie cards that have inscriptions written on them.

Overall Rating -
I'm glad Trilogy is a bit less expensive than it used to be. There was a time when Trilogy packs were over $20 each. They are more reasonable now with the box price being just over $100. Trilogy can be a fun product, but I'm not sure how bit a hit this set with be with collectors out there. Trilogy has never been one of the more popular brands, and it rarely makes a big splash. If yo're looking for something to tide you over during the season, this might be ok. But honestly, if you miss out on this product, you probably won't be missing too much.