I decided to do something a little different this week for Retail Review. Instead of going for a modern era product, I got a box that a collector may have found on the shelves back in the early 90's. This box came at at a time when design of cards looked great and had a modern feel and when inserts were all the rage. It should be a lot of fun to get into an older box like this. 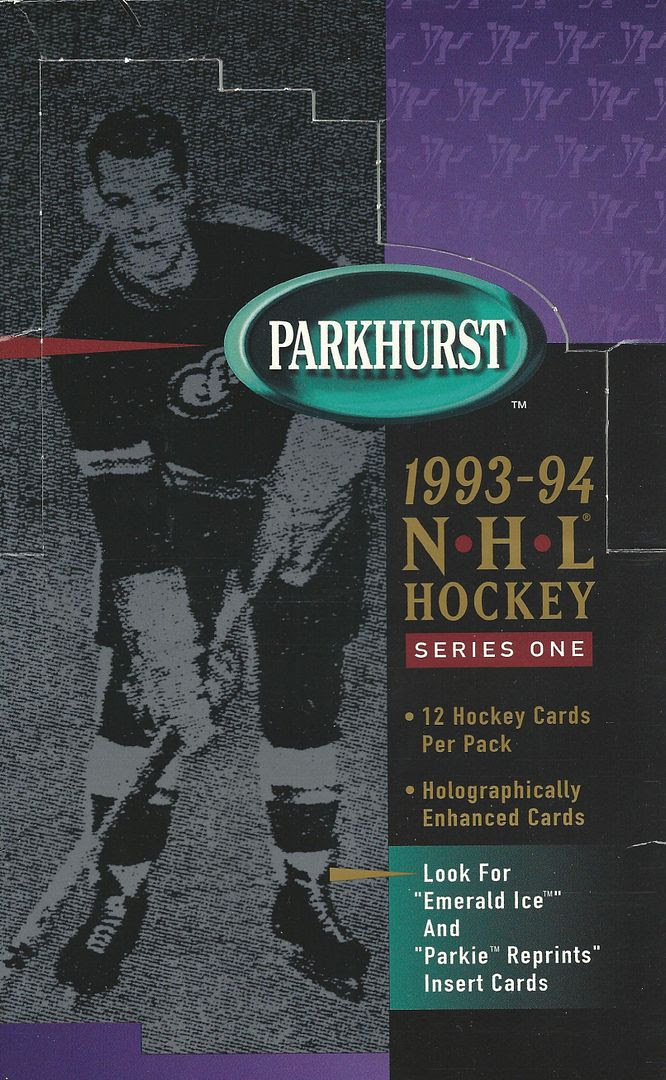 This is definitely dating myself, but I do remember buying these cards when they came out. It was a nice looking product and the Emerald Ice cards were awesome parallels to chase. At the time, buying a whole box was unheard of - well, at least by me. I really just went to the store to buy packs, and I could really only afford to get a few. The entire box contained a whopping 36 packs! There were a lot to choose from and I always hoped to get the pack with the best inserts and parallels in them.

This product has a couple of inserts to look forward to. There are the Emerald Ice cards as well as Parkie Reprints. The Emerald Ice card are similar to parallel cards of today... I guess not a lot has changed on that front. These parallels replace the standard foil with a green foil. Parkie Reprints are just that - reprints of old Parkhurst cards. Pulling the Parkie Reprint from just one pack out of the box would be a big challenge for a collector in the 90's. I don't think I ever got one back then, but today that might just change!

Let's open up this relic from the 90's and see what it give me:

Review -
Whew! What a long break! This type of break is probably not the best in terms of rushing as the cards are meant to be enjoyed and looked carefully at. But I didn't want my video to go long so I just broke the cards out so that I could examine them more closely later. I've got to say that you got a lot more cardboard in the 90's. I ended up with a tall stack of cards!

Each pack had an Emerald Ice card in it. I had initially thought they were hard pulls at perhaps one per box, but in 93/94 they were one to a pack. I could have been that another Parkhurst release in an even earlier year had the emerald parallels at one per box. I'm not sure. But it was cool that the emeralds were in each pack as it gave me something look look forward to every time I ripped open a pack.

My biggest complaints about this product are that the cards were every which way in the pack. That's a minor pet peeve of mine. I hate having to turn all the cards the right way. Modern card manufacturing is a lot better in that regards. Nowadays, you pretty much know where the insert or hit will be slotted in the pack. With the Emerald parallels, some came at the front of the stack while others were in the middle. I never knew!

I was also losing hope of getting a Parkie Reprint card as I was going through the box. It was really nice to be finally able to hit it as I was finishing the break. I would have been pretty sad if that card didn't come out!

Lots of cards to choose from, but here are my top three: 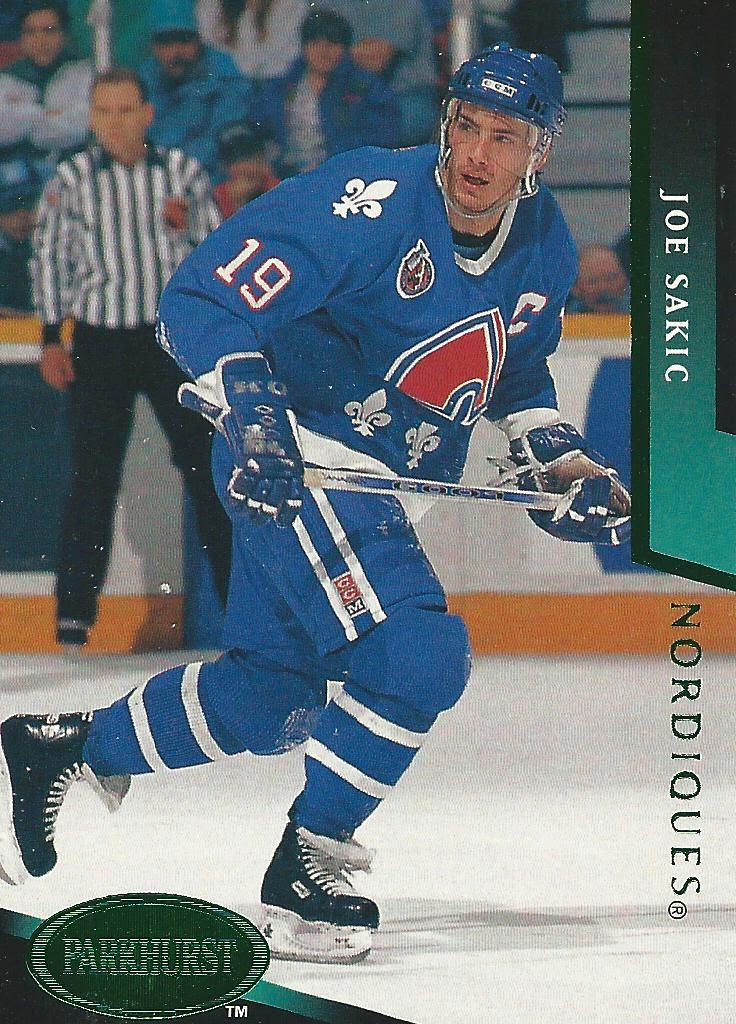 #3 - Joe Sakic Card No. 169
I definitely wanted to have an Emerald Ice parallel in my top three... but which one? I decided on Super Joe as he was one of hockey's best and on this card he is wearing a Nords jersey! I definitely have a thing for franchises that have moved or are no more. 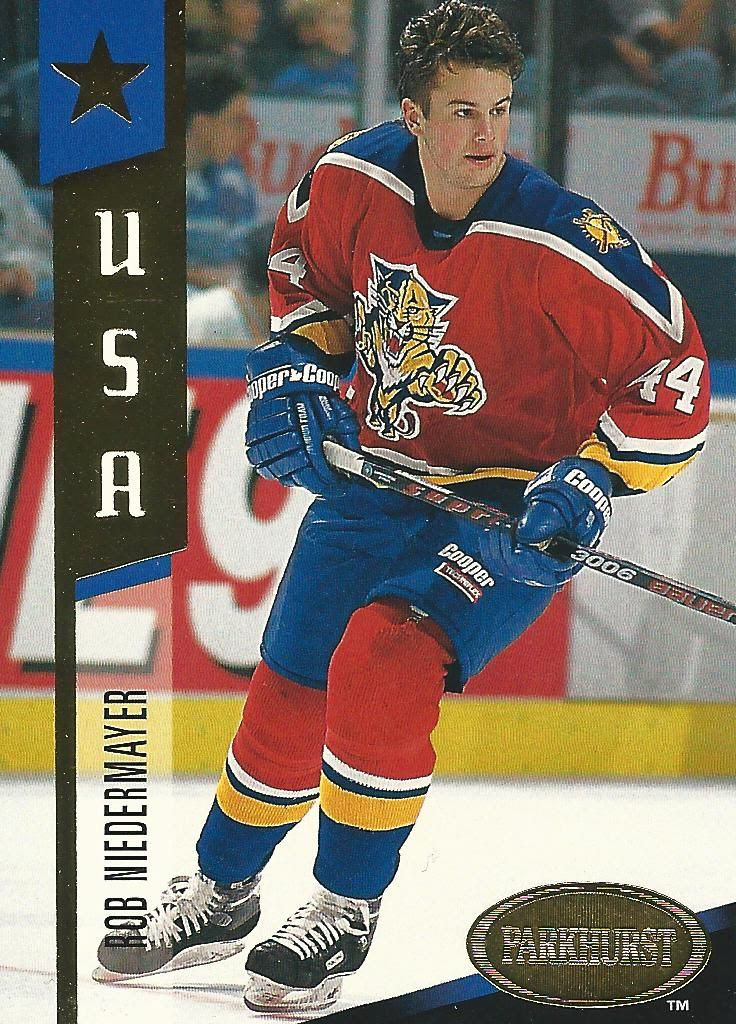 #2 - Rob Niedermayer Card No. G5
Rather than being a green foil parallel, this card is from a special insert set featuring players that played for the USA. These inserts come one per box and have a bit more foil on them than the regular base cards. I like it! 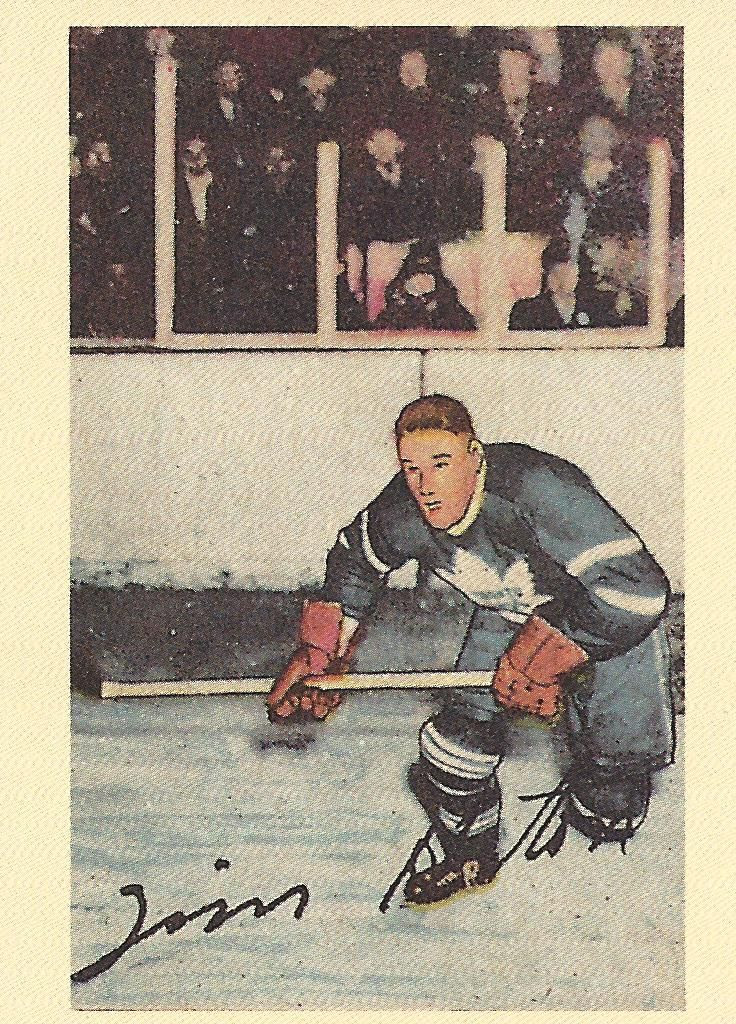 #1 - Miles "Tim" Horton Card No. PR-34
This is the card that I was waiting almost the entire box for. This is the Parkie Reprint I pulled from the box. It's a very cool retro card that I'm glad to have. It is definitely the most unique and different looking of all the cards in the box.

Overall Value -
For under fifteen bucks I got an entire box of 36 retro packs. The early 90's is known as the junk wax era since there was so much of it produced. Much of the stuff can still be easily found - like this box of Parkhurst. It was worth it for me to break as I remember this time of collecting fondly, but for everyone else, it's something you can probably pass on unless you want a nice lesson in the past.

Let me know what you thought of this box in the comment section below. Have you ever pulled anything good out of one of these? I'd love to hear about it.

Look for a new episode of Retail Review every Sunday!
Posted by luke. at 9:18 AM