Premier has come out... and boy is it an expensive product!!! But as is Upper Deck's tradition, the later the product in the collecting season, the more expensive it is (well, except for Portfolio I guess). One box/pack of Premier will set you back over $300. Wow. There better be some awesome stuff in this product for UD to be asking for that price!!! 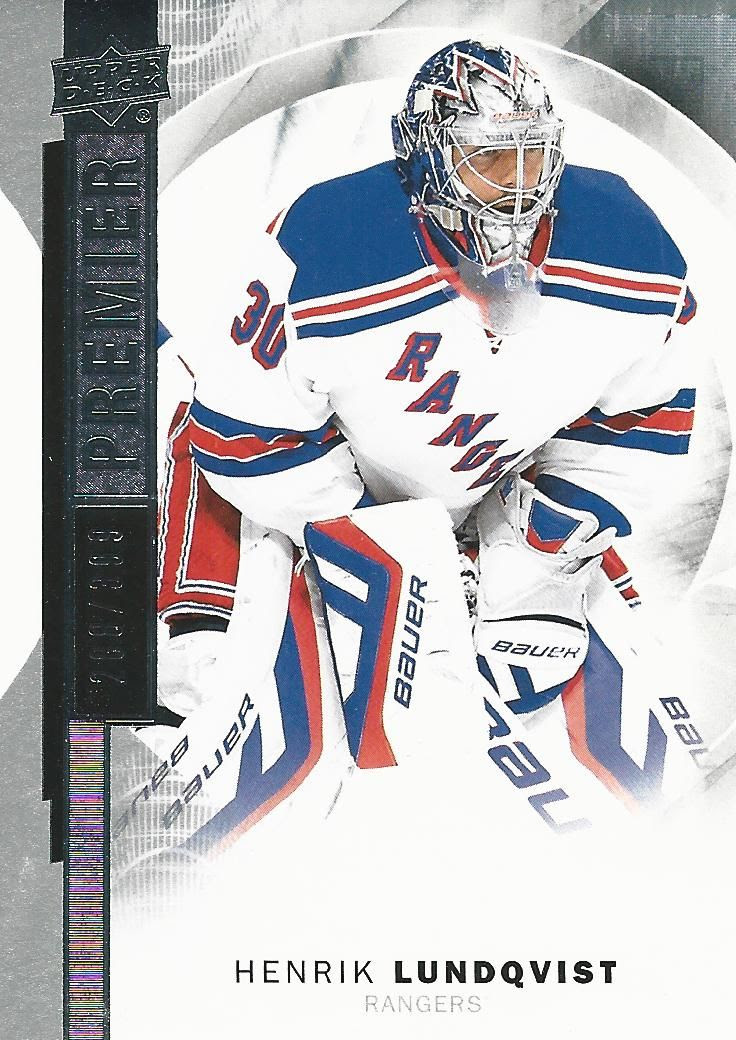 Base Card Design -
The Upper Deck Premier base cards come on premium thick card stock and are serial numbered to 399. They sport a very modern design with a relatively minimalistic feel. Most of the glitz on the card comes on the left hand side where there is silver foiling. Though the cards are nice and clean, there really isn't anything that makes these base stand out. They're sort of the typical high-end card without a lot of drama. For collectors who prefer a simpler approach, these cards might be exactly the base you want. I, on the other hand, would love something more dramatic. 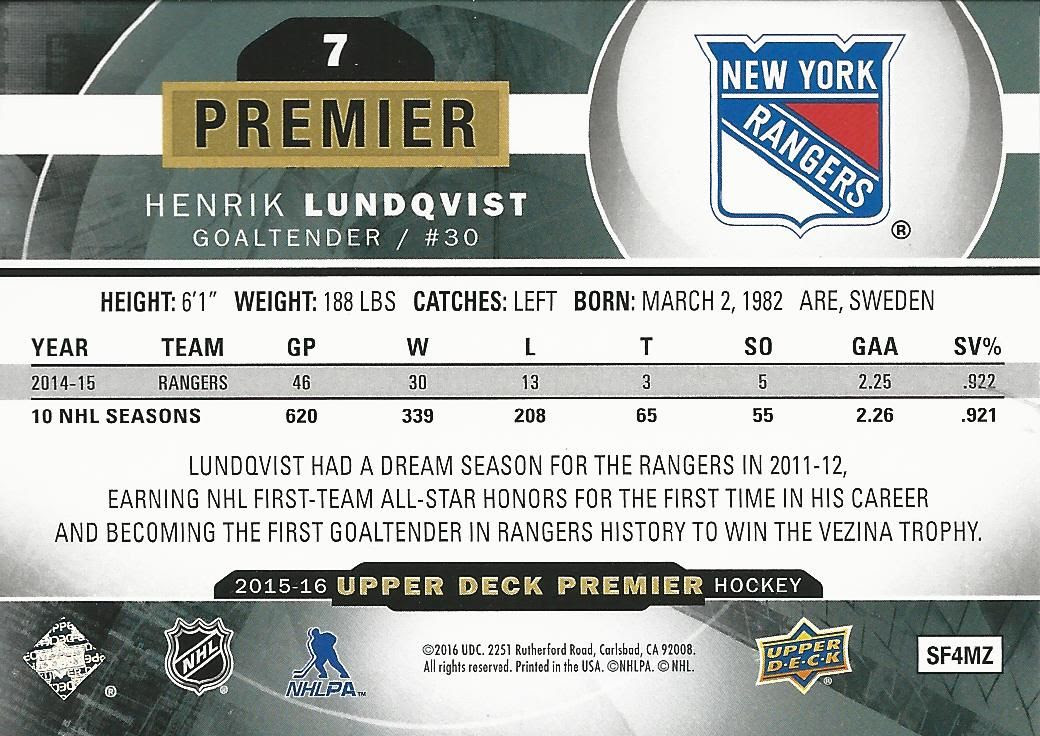 Interestingly, the card backs have a horizontal orientation. Having it this way makes the cards a bit more interesting. The graphics used on the back aren't typical of what you would find on a card back - they actually have a livelier feel to them. The colors are bright and bold and there is actually a little bit of written text to accompany the statistics - that's pretty uncommon for high-end! These card backs are surprisingly well done and I applaud the effort UD has done on them. 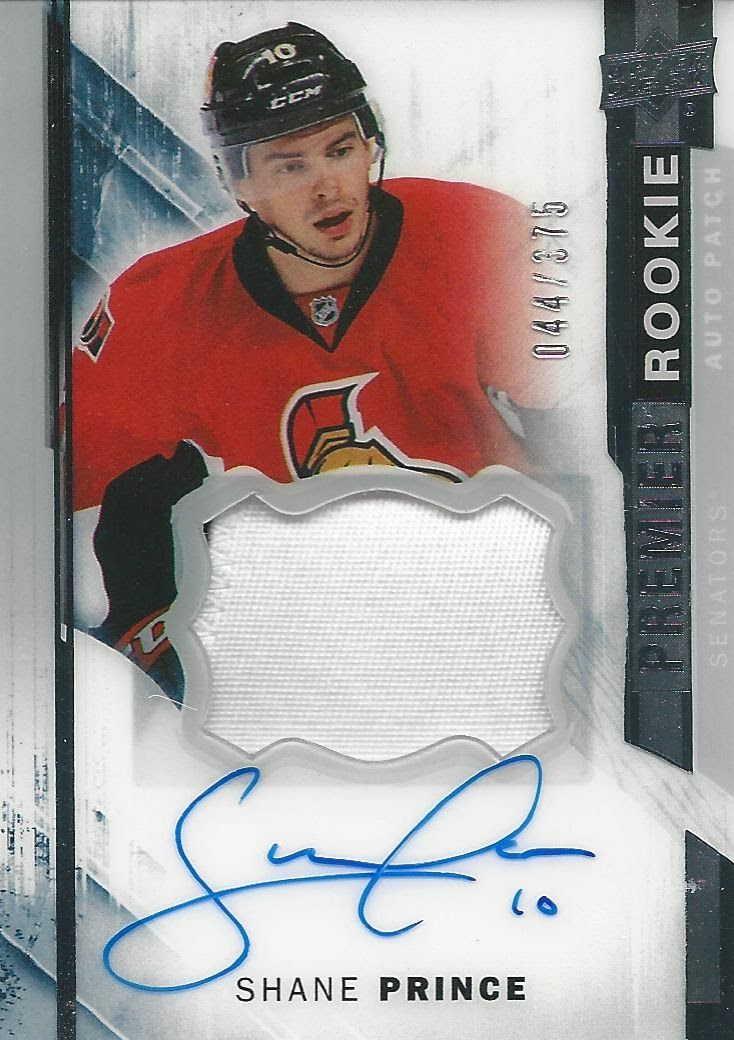 There are two types of of rookie cards in the main set of Premier. The first set is a simple design that has a similar feel to the base set except that the cards feature an autograph. The second are the rookie patch autographs done with an acetate feel. The acetate rookie cards are the ones that collectors will take most notice of. They come one per box and are numbered to 375 (or 199 for the star rookies). The acetate rookie cards look great. They have a sweet and slick shimmer to them that is quite unique. These rookie cards make a nice addition to the main set and build upon the look of the standard base card.

Inserts/Game-Used/Autos -
Being a super-premium product, Premier comes in a really great looking tin. These tins may be collectible themselves in the future if Connor McDavid pans out the way many think he will. Inside the tin is an abundance of hits. There better be as the price of Premier is sky high! 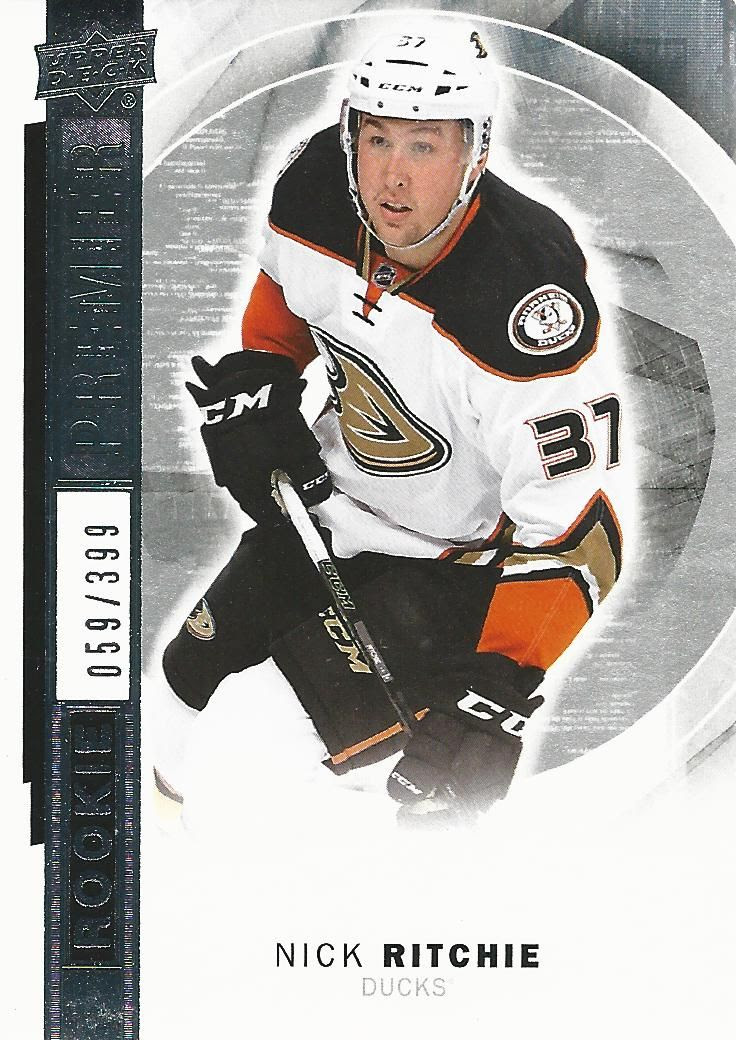 It's hard to call this 'rookie card' an insert, but it is not numbered as part of the main set. These cards are numbered to 399 (or 299 for star rookies) and look just like the standard base cards. I thought these were the regular rookie cards of the Premier set, but upon inspecting the back, they aren't. Each card in this set has an 'R' designation next to the number. I'm not sure why these cards were included in the set, in my opinion they could have easily been left out. 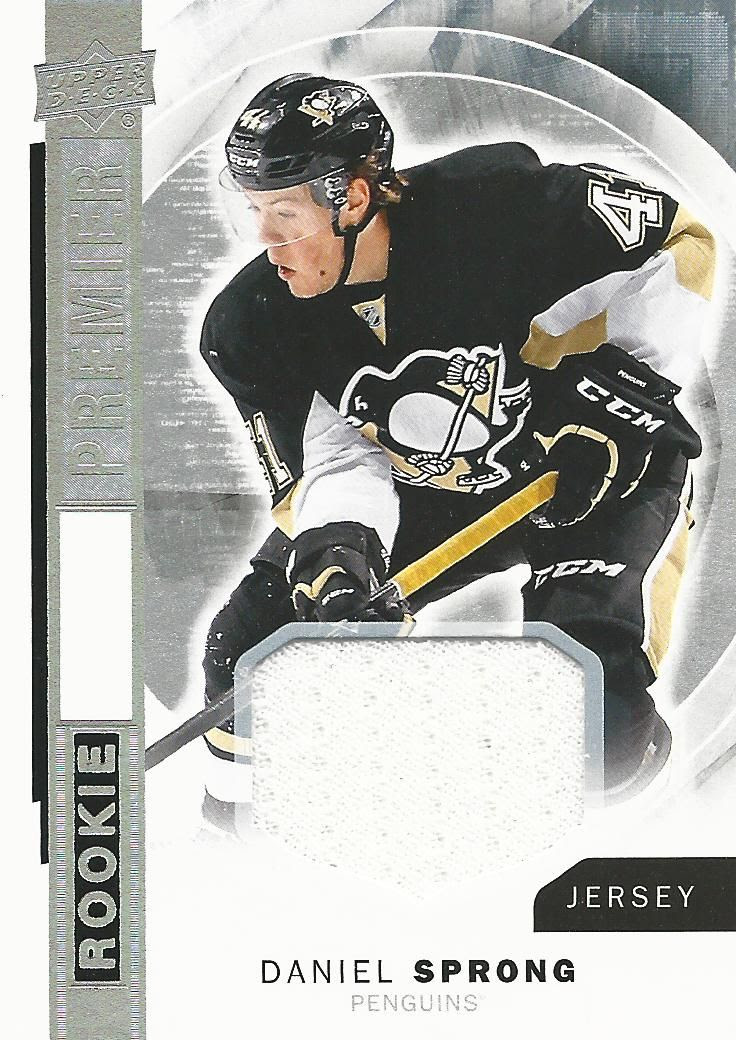 In almost a parallel to the rookie set above are the rookie jersey cards. These, interestingly, aren't numbered. There is a box where a serial number could be placed, but there is nothing there. The regular set has an event used jersey piece. Higher level versions exist and have better materials in them. 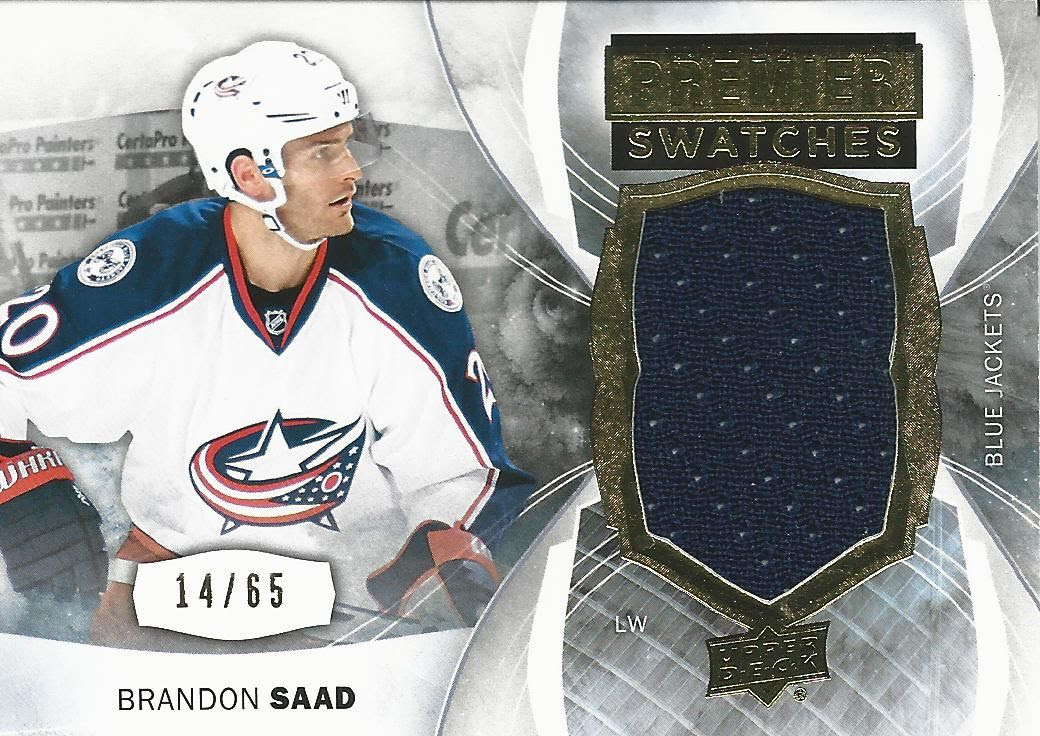 This Premier Swatches jersey card is similar to the rookie jersey cards but with one big difference. The jersey piece inside has come from an actual game rather than event such as a photoshoot. That makes a big difference to many collectors. It's really great to know that the memorabilia inside the card came from a game. In terms of market pricing though, there probably won't be a significant difference. 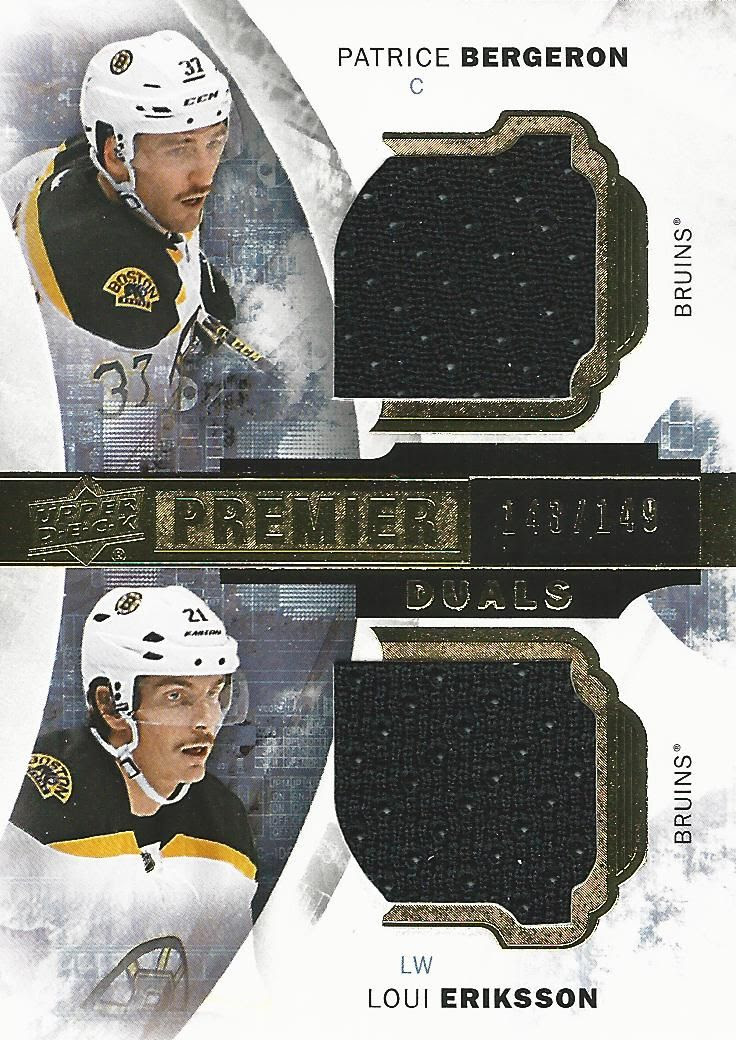 Here's a dual jersey card that I pulled. Like the Brandon Saad swatch, both of these have been guaranteed by Upper Deck to have come from a game. This particular dual jersey card is numbered to 149. As you probably have guessed, there are patch variations of these cards available for collectors to find as well. 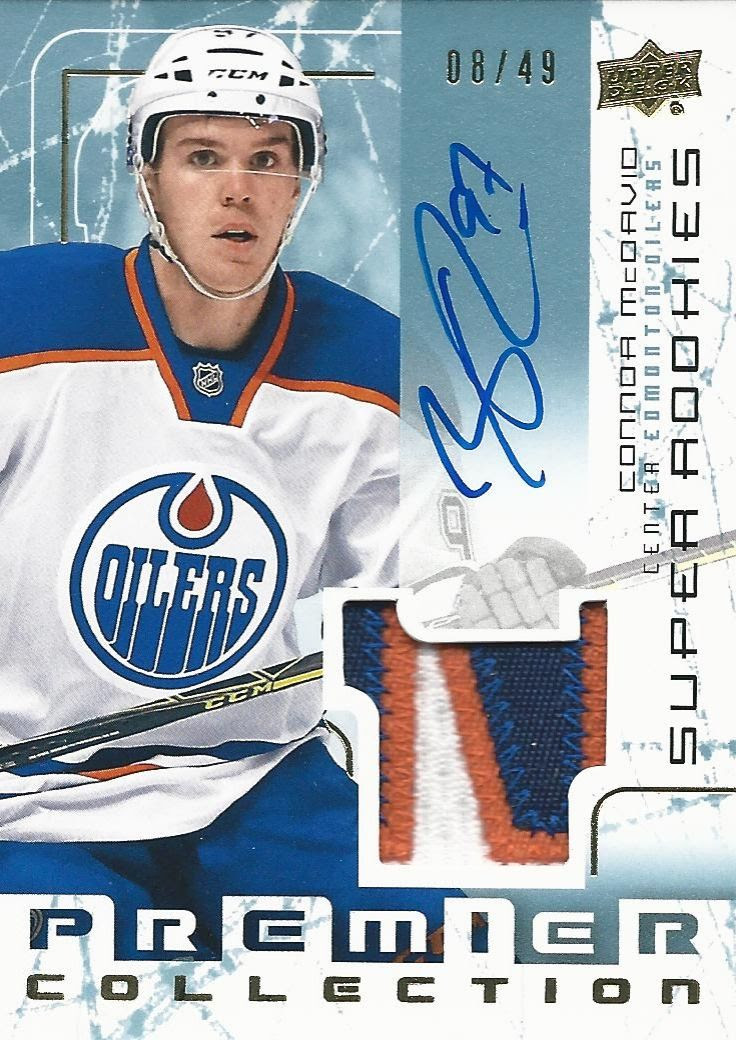 My huge pull from the box was my first Connor McDavid autographed card. It's from a Tribute rookie card set and features an on-card autograph along with an event-worn patch. It's a sweet looking card, and I love it even more because it has an interesting retro design to it. This card paid for the box and then some! It's this kind of card that you hope to get when purchasing products like Premier.

There are many more types of cards to find in UD Premier. Collectors will find heaps of autographs and memorabilia cards in their boxes. Some of the nicest cards have to be the Mega Patches. Those cards feature giant patch cards that can fill up almost the entire card surface.

Overall Rating -
Certainly I am loving my personal break of Premier because of the McDavid, but keep in mind that most boxes of Premier aren't going to yield a huge hitter like that. I was definitely bracing myself to get value far less than what I had paid - just like my Ultimate Collection break a few weeks back. Luckily I hit a big card... and of course that's one of the reasons we collect... because every so often we can hit gold!

Premier is probably the second most expensive product Upper Deck has for collectors this year. At over $300 a tin it is well out of most collectors budget. If you can afford it, sure, go for it! The thrill of opening up a tin of Premier is pretty great. But like with most super-high-end products, my recommendation is to wait for singles to hit eBay and get them there for some reasonable prices. Sure, you won't get the McDavid card... or the Gretzky... but you can probably pick up some reasonable deals on good players.


Check out my box of Premier here: