Upper Deck has officially started of the 2016/17 hockey card campaign with the release of MVP Hockey. This lower-end brand has always been one of the first products out of the gate for Upper Deck. In recent years, MVP has really upped its content by adding inserts, autographs, and memorabilia cards into the brand. There are no guarantees to get one per box, but the prospect that they are there is great in and of itself. 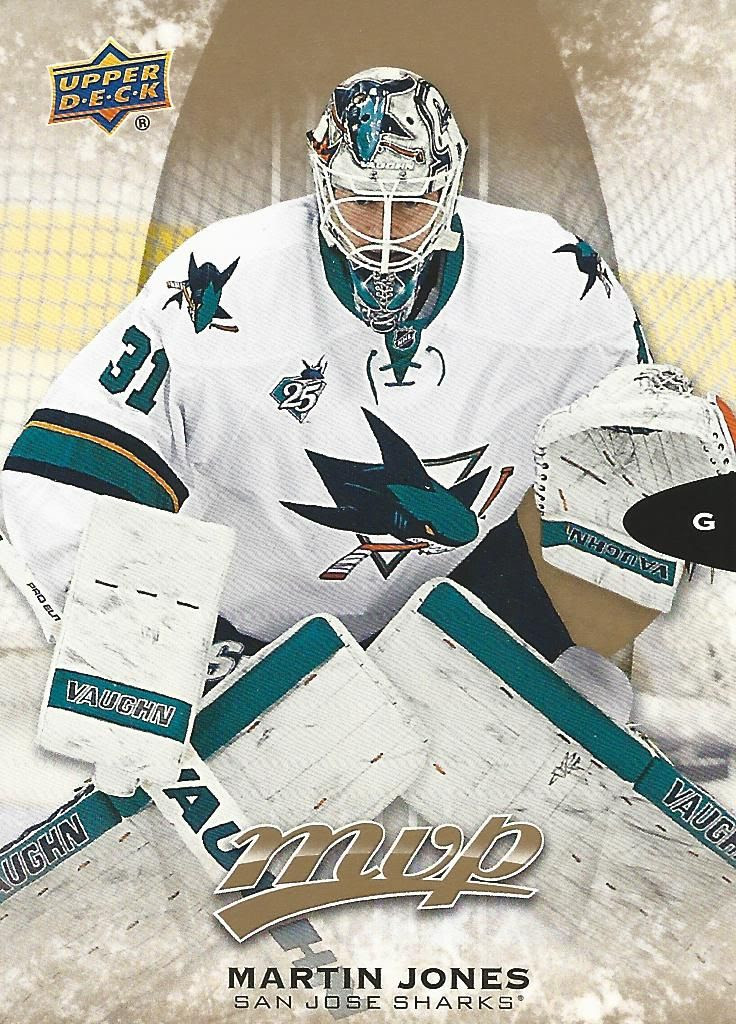 Base Card Design -
For a low-end card, the design and feel of the MVP base cards is above expectation. The cards aren't plain, but rather have a design that is unique and well-thought out. In a small way, the shapes used in the background have an Ultimate Collection look to them. Yes, yes... it's a pretty far stretch for  a comparison, but I just mean to say that the base cards use design elements that aren't the run of the mill look. There's no solid border here - the design scheme just fades nicely into the card and gives a frame-like look that makes you focus on the player featured. Overall Upper Deck did a solid job on these cards and I think those who purchase MVP this year will enjoy them. 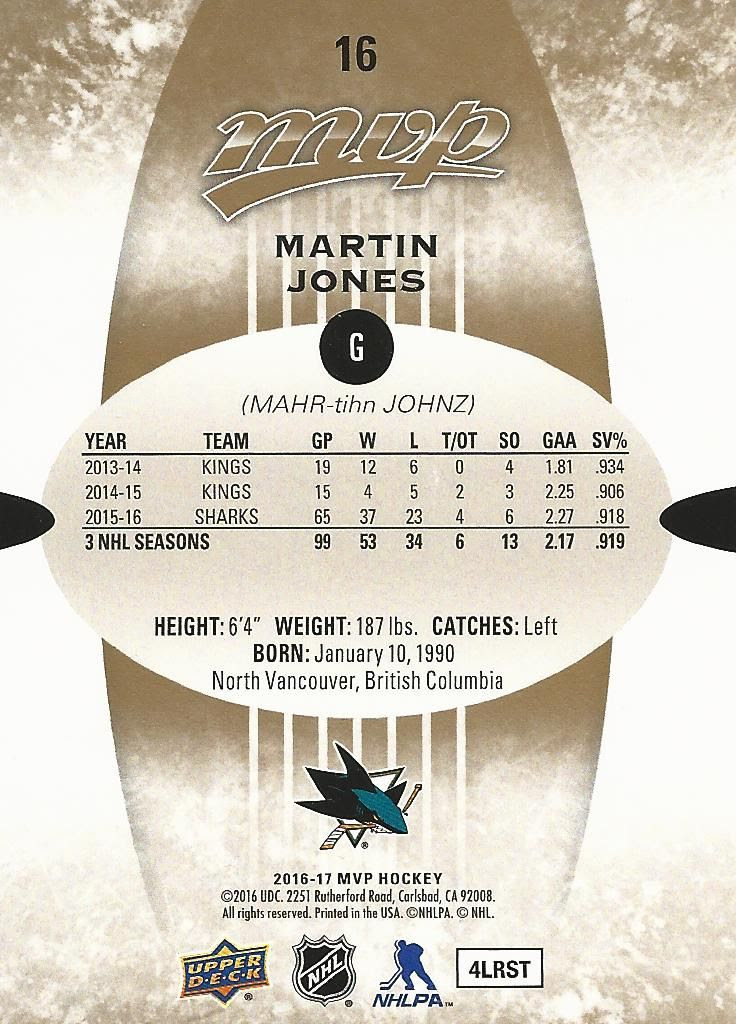 The back of the card mirrors the front design but eliminates all photographic elements. You basically just get stats and bio information. There's not much of interest to see here unless you need to take a look at how a player did between the 11/12 and 15/16 NHL hockey season. Something else collectors may find useful is the pronunciation of the player name located under their position in the center of the card. MVP is one of the very few brands that includes pronunciations. It's a great little addition since may people (myself included) struggle with the correct way to say a player's name on occasion. 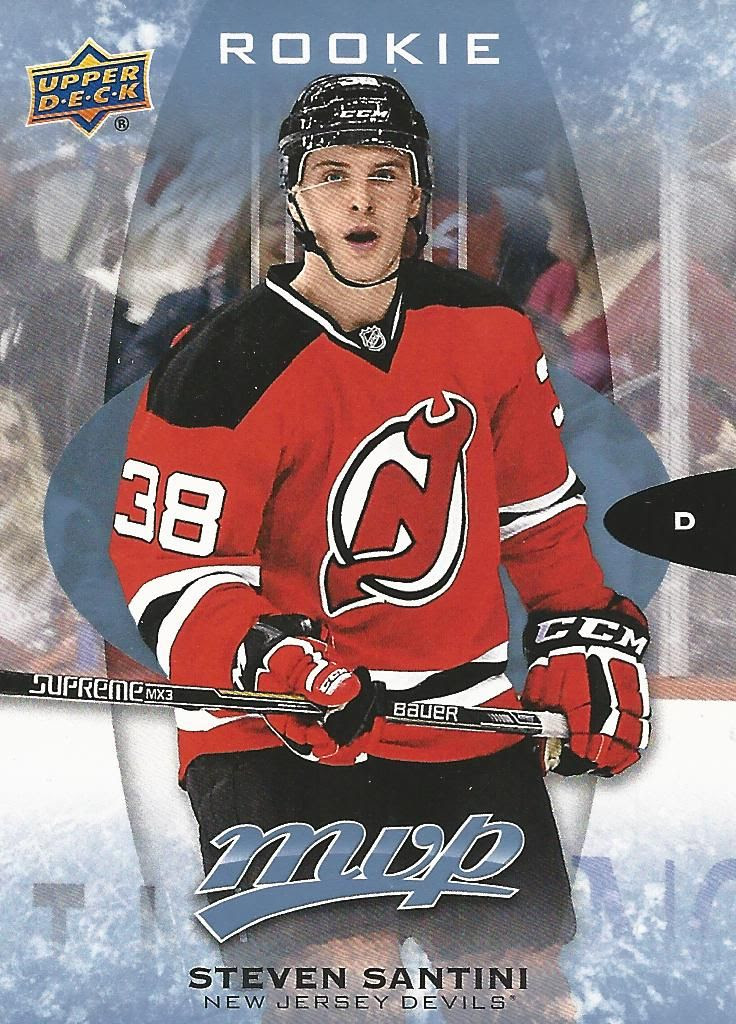 Rookie cards in MVP share a similar design to the regular base cards save for a 'ROOKIE' logo located at the top of the card as well as a blue/gray color scheme rather than the bronze/gold look. The rookie color scheme is much better looking than the standard cards. The color works a lot better for hockey cards. The rookies in MVP are players that got a chance to play last season but didn't get featured on a card. These rookies tend to less popular than the ones that get playing time right when the season begins. There will most likely be an update to these cards in a later Upper Deck release. 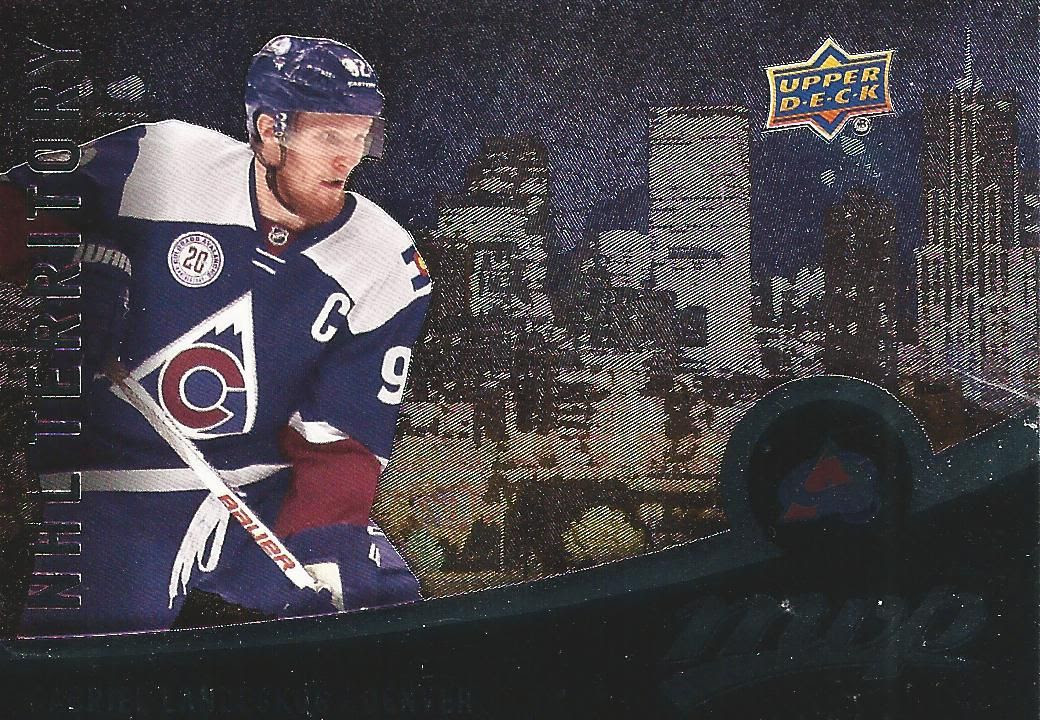 At first glance I would have thought that the NHL Territory foil cards were special inserts into MVP, but they are actually numbered as part of the main set. The theme of these cards is the place in which the feature player plays. These cards have a nice foil background of the skyline of the city. They are nice cards that may be popular with collectors who enjoy cards with a strong team/city connection. 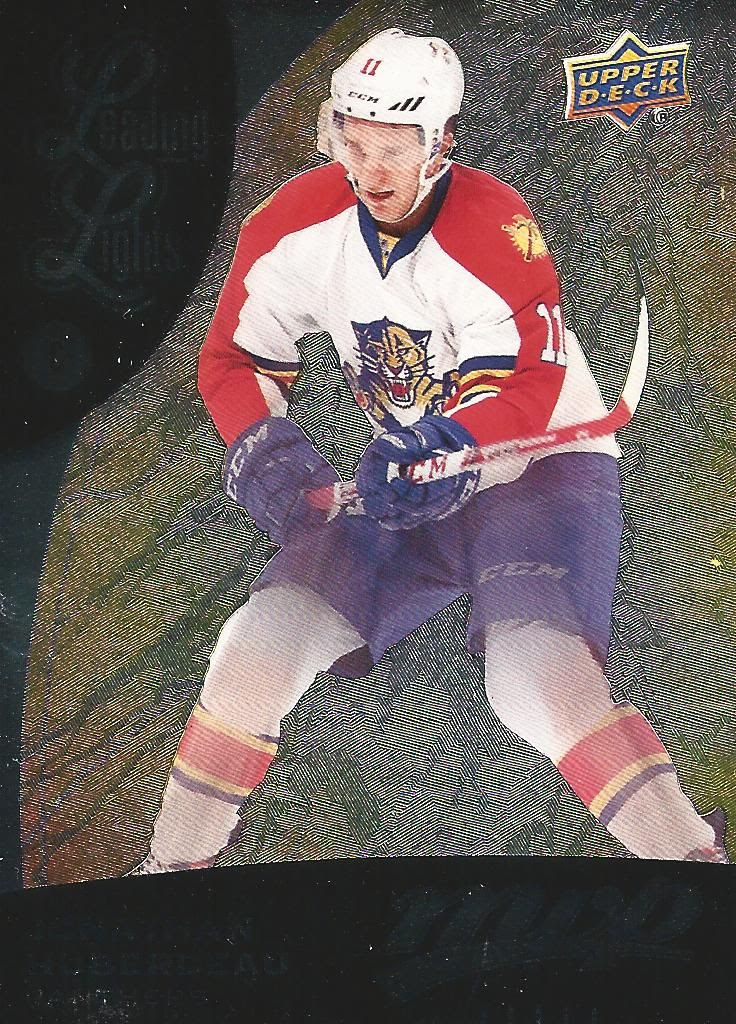 Leading Lights are another main-set-numbered subset that looks like an insert. These cards are also feature a foil background. Rather than focusing on a place, these cards honor players who were outstanding in different statistical categories.

Inserts/Game-Used/Autos -
As MVP is a low-end brand, getting a hit in the product can be quite difficult. The only guarantees collectors get for hits is at the case level. Last year I was really lucky and got an amazing Wayne Gretzky Pro Sign autographed card. This year my box didn't contain a hit. 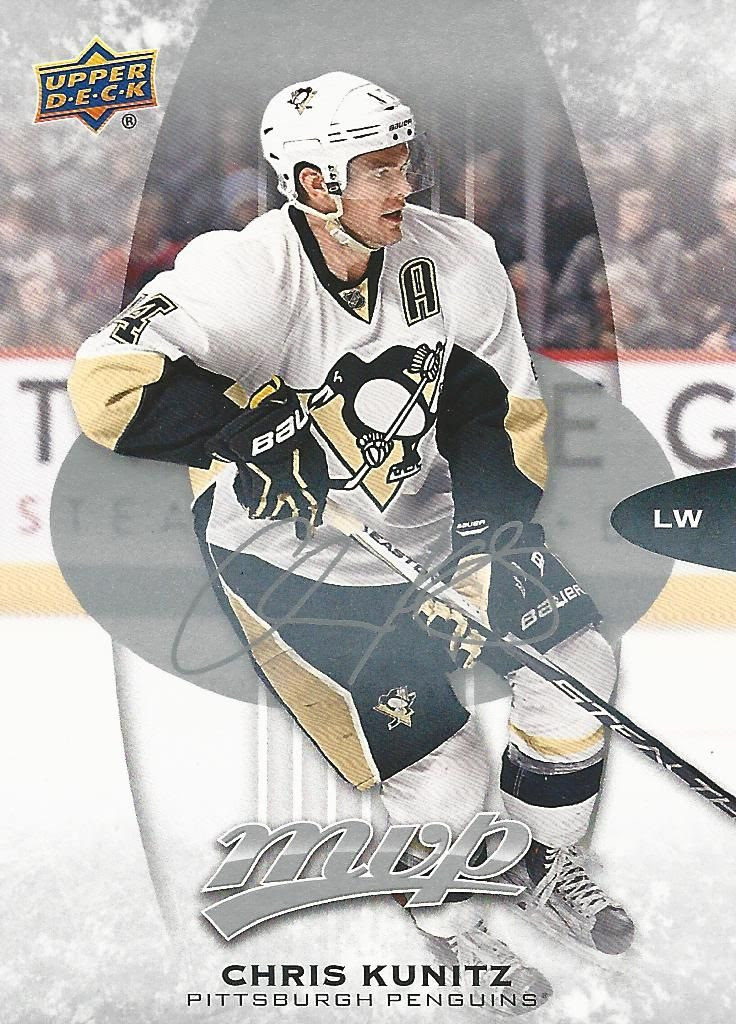 Making their return are the Silver Script cards. These cards have been around in MVP for a long time. I have always liked the look of these cards as they have a very nice looking facsimile autograph on them in silver. The facsimile autos on the fronts of these cards actually look like real autos signed in silver ink. Hopefully nobody gets confused and thinks hey pulled an autograph with these! 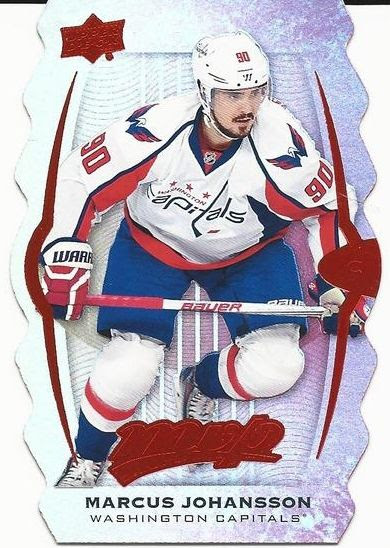 Colors and Contours make their way back into MVP this year. These nice looking die-cut cards confuse me as there are different color and level tiers. Collectors will have to really study the back of the packs to know exactly how rare of a card they pull from this set. These cards certainly stand out with their holofoil background, but I'm not sure how many collectors will actually take the time to find out how rare their card is. 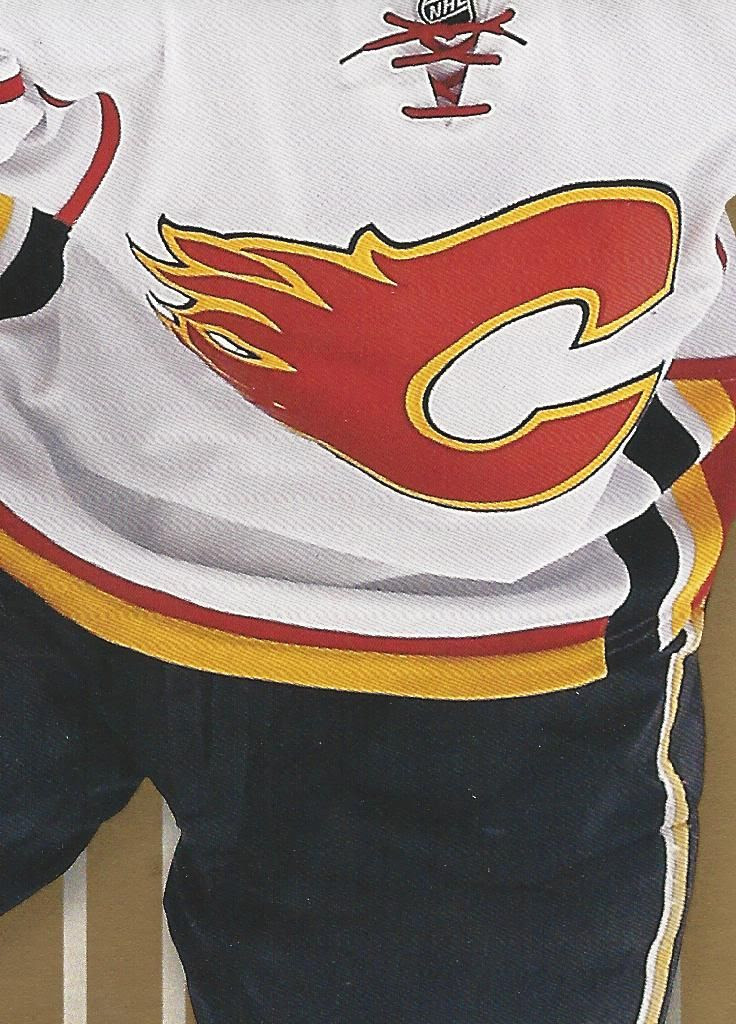 New this year are puzzle cards. Puzzle cards are a variation of the main set. The front of the card is actually the puzzle piece. The back looks like the standard front of an MVP base cards except for card number and a few other back-identifying marks. I have never been too fond of puzzle cards, so I'm not jazzed about these cards at all... but they may appeal to some collectors who like the challenge of putting the entire picture together.

It would have been really nice to get a hit from this box, but I think a lot of my mojo was used up with last year's MVP. Though hits may be hard to get, they are certainly not impossible and should cone out at a nice pace if buying boxes of the product.

Overall Rating -
It's always hard to believe it when MVP comes out as its usually out when card products from the previous season haven't been released yet. For collectors dying to move forward, MVP would be a fun product to bust.

MVP is a familiar product to collectors who have had a few years under their belt collecting. I think it's a product that has improved year after year - even if just a little with each passing season. There are some legitimately nice cards that can be pulled out of MVP.

MVP is not a product that will break the bank. Anyone can pick up a pack or even a box. After being used to paying $100+ dollars on boxes, it was pretty good paying under fifty for this hobby box.

A lot of high-end collectors will most likely avoid MVP, but this set of cards is great for more casual collectors just looking for something affordable to break and take a chance on.

Check out my break of MVP below: