This is a product I remember very fondly. Upper Deck Black was one of the best looking sets when it was first released about eight years ago. The black look contrasted with the ice theme very well leading to some gorgeous looking cards. Black has been MIA for a while now, only appearing as inserts within some Upper Deck products the past few years. Here's it's proper return with a full set of cards. Base Card Design -
The base cards in this year's black are busy and energetic. There's a lot going on in the background of the card, but it all looks so cool! I love the prismatic foil used to highlight the Black logo in the background as well as the player name, UD symbol, and brand name. The design is quite eye popping. I think what makes this work so well is that the background is darker save for the foil elements. It almost looks sort of like a microchip or computer motherboard from the movie Tron. Black definitely has a modern design that is very appealing and unique. 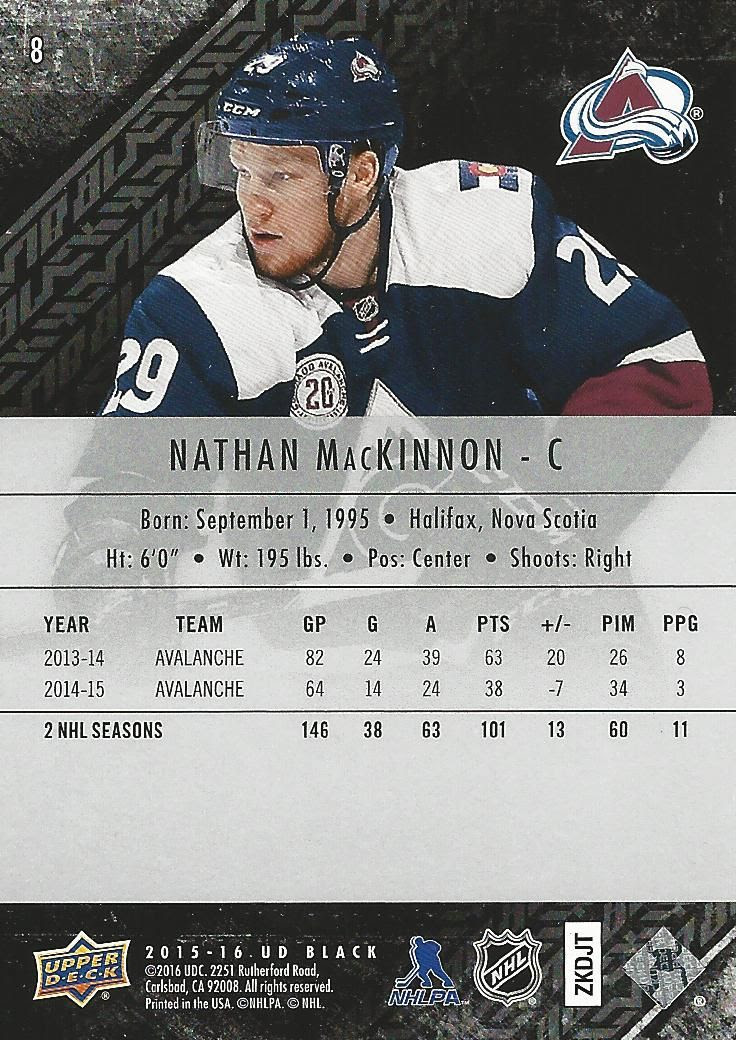 The back of the base card is quite a bit more basic than the front - almost disappointingly so. There is no foil highlights making the back jump out at you. It's all rather bland, in fact. I've seen Upper Deck have some very creative back-of-card designs on lower-end products, and wish they'd have done something more creative here. These backs are very sparse with just some stats - there's not even a little write up! Though I don't particularly like the back side of the card, I do want to mention the side of the card. Like with previous Black releases, these cards have sort of a layered look on the side. It's a very unique property of the Black cards that I appreciate and enjoy. 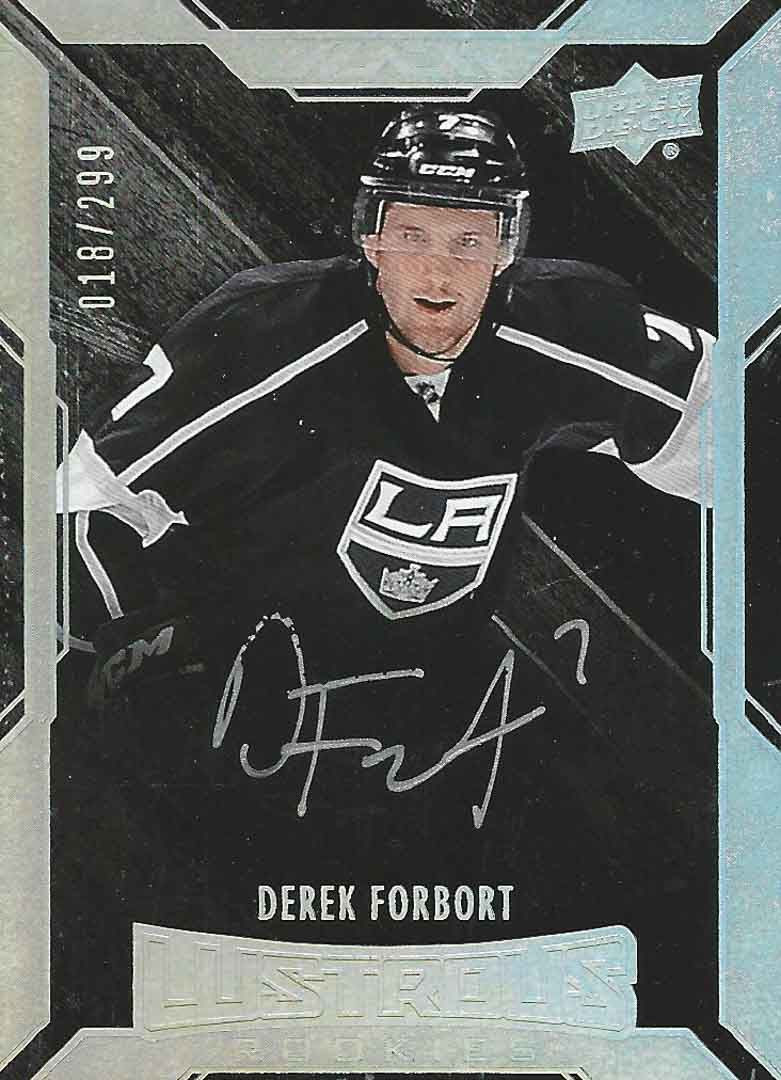 Rookie cards in Black come on thick sandwiched cardboard and are either numbered to /199 or /299. The /199 rookies are the bigger named guys such as Connor McDavid and Jack Eichel. These Lustrous Rookies are all hand-signed except for Eichel because of his exclusive deal with the Leaf company. There's quite a bit of foil shown on these rookie cards, but to me it's too heavy handed. I loved the thin lines of the base cards. I wish the designers would have done something along those lines rather than this.

Inserts/Game-Used/Autos -
Initially, Black had a packaging design that contained two small boxes in one larger box. Opening up a box of black had its own flair that many enjoyed with a product that was quite expensive. With this release of Black, Upper Deck has gone with the one-box, one-big-pack packaging that they've done with other similar products this year. Each pack/box contains 6 premium cards. 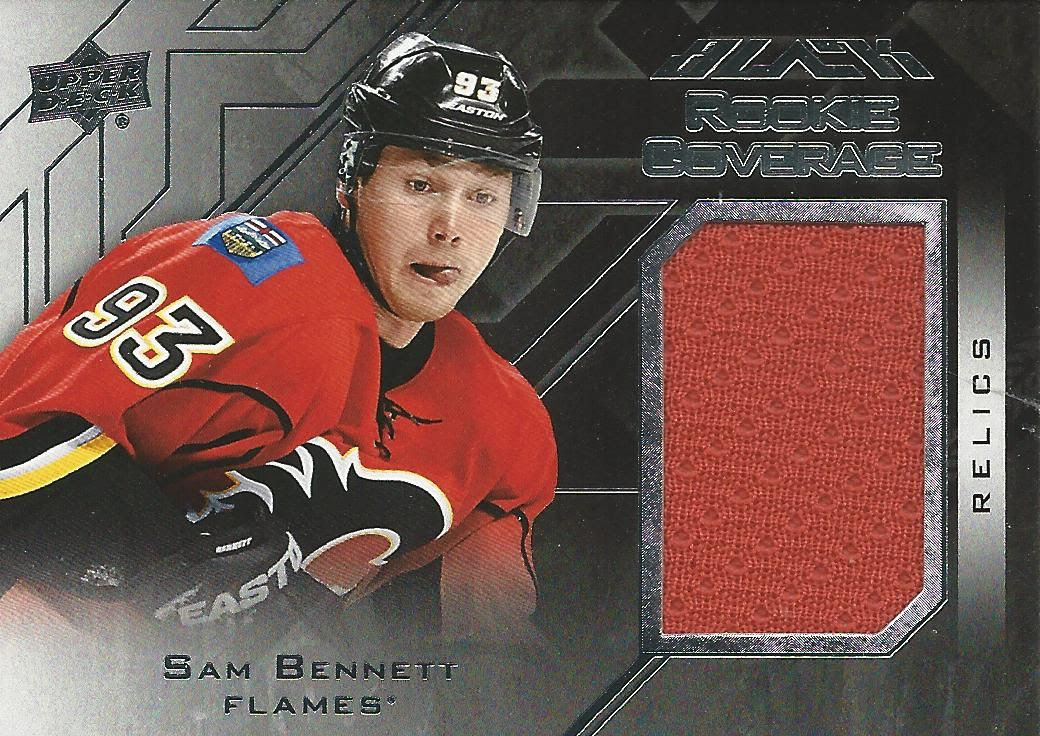 Super-premium products usually put a bunch of jersey cards in the set as fodder, and black is no different. Black Rookie Coverage jersey cards contain a piece of photoshoot worn material and have no numbering on them. The design of these cards is pretty pleasing, but it doesn't make-up for the fact that these cards will be a dime a dozen on the secondary market. 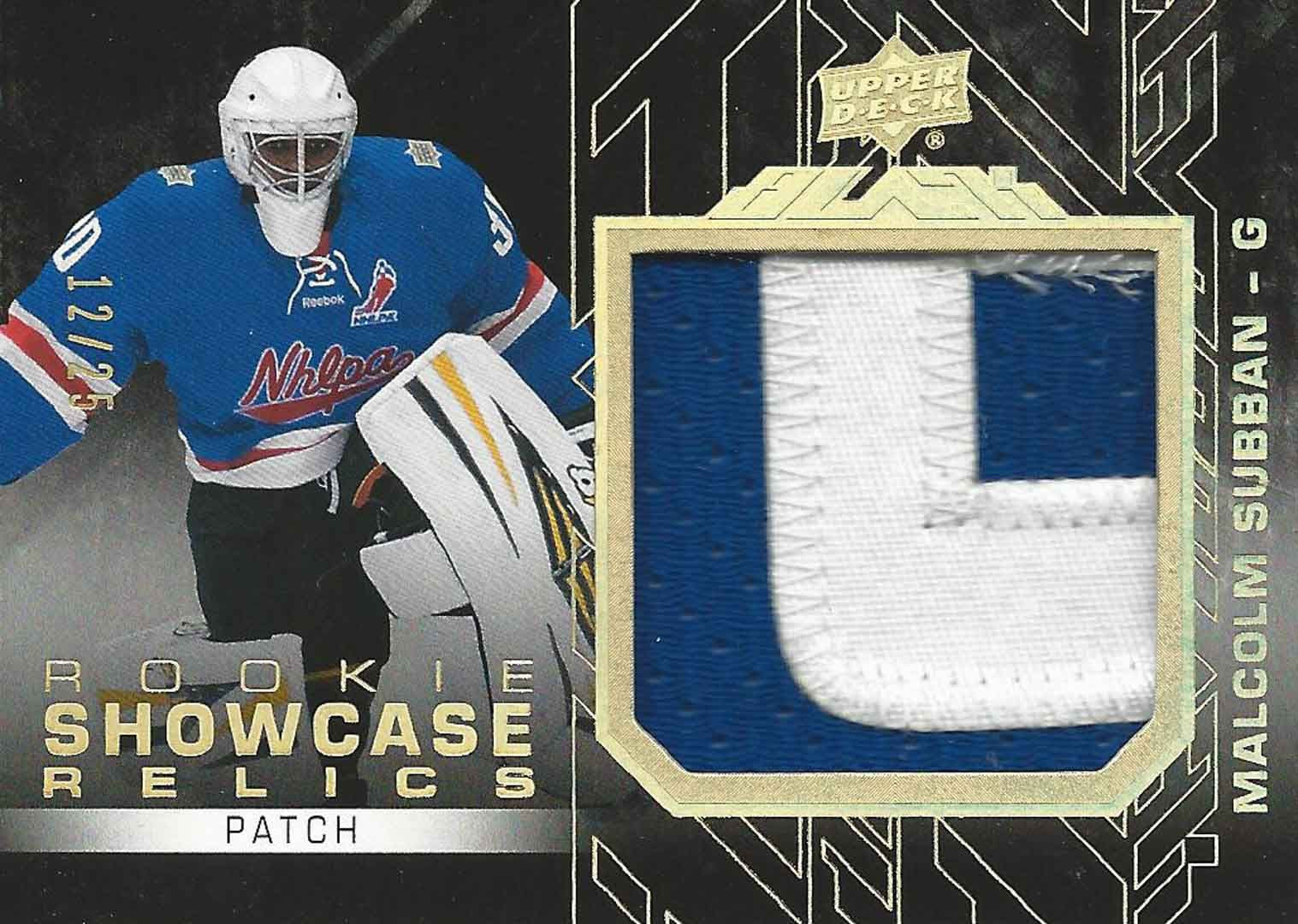 A bit nicer than the Rookie Coverage cards was this Rookie Showcase Relic card I got of Malcolm Subban. This card is numbered to just 25 and contains a rather nice patch piece. It states on the back of the card that the piece came from the 2013 NHLPA Rookie Showcase Game - so that's better than a photoshoot at least. The design of the card is again very nice with the thin gold foil lines on it. An autograph would have made this card a lot better though. UD does have autographed version of these cards numbered to 10 - wish I had gotten that version! Probably the best card I got from my break was this Pro Penmanship card of John Tavares. It's a very nicely designed card with an acetate feel on the surface. The autograph is hard signed in blue ink on an icy white spot. The card is pleasing to look at and I'm glad I have this card to add to my collection. Tavares is a quality player and sometimes it can be hard to get bigger name players out of rookie heavy products such as these.

Black has a ton more to offer than what I was able to pull out of this one box. Pride of the Nation flag patch cards are back - oh, I want one of those cards SO BAD! There are even cards like what Panini had with the full tied string portion of the jersey available. They are called Black Tie Affair cards and are 1 of 1 redemptions.

Overall Rating -
Man... I just LOVE the way Black looks and the cards you can potentially pull out of it. Upper Deck has really done well with the design of these cards and it just makes me want to buy, buy, buy! The only problem is the price point of the product. Being a super-premium product, Black has a super-premium price. These little boxes in the US are going for $260-275 per and even more in Canada. That price-point really puts a damper on people getting multiple boxes of it, let alone a single box. I estimate the value that I got in my hits to total well under $100. That really sucks. And I'm sure that will be a common breaking experience unless a collector is lucky enough to pull McDavid or Gretzky.

UD Black is definitely for the rich collectors who have the money to spend on this high roller of a product. It's definitely a hot or miss brand with the vast majority of boxes being misses in terms of value. The gamble sure is fun though!

I suggest waiting for a little while and start finding single so the cards you want on eBay. You'll save yourself a lot of money and though you won't have the thrill of opening a pack or the off-chance of pulling a Connor McDavid auto rookie, but you'll also spare yourself some pain if you miss on your pricey pack of Black.