To be honest, I had absolutely no idea that Upper Deck was changing Black Diamond's configuration. I hadn't kept up with it at all, and so when it released today I was in shock at the price and the product configuration. Upper Deck has completely re-done Black Diamond into a high-end one-pack-per-box type product with a high-end price tag to go along with it. I'm curious to see if the change was worth a good one. 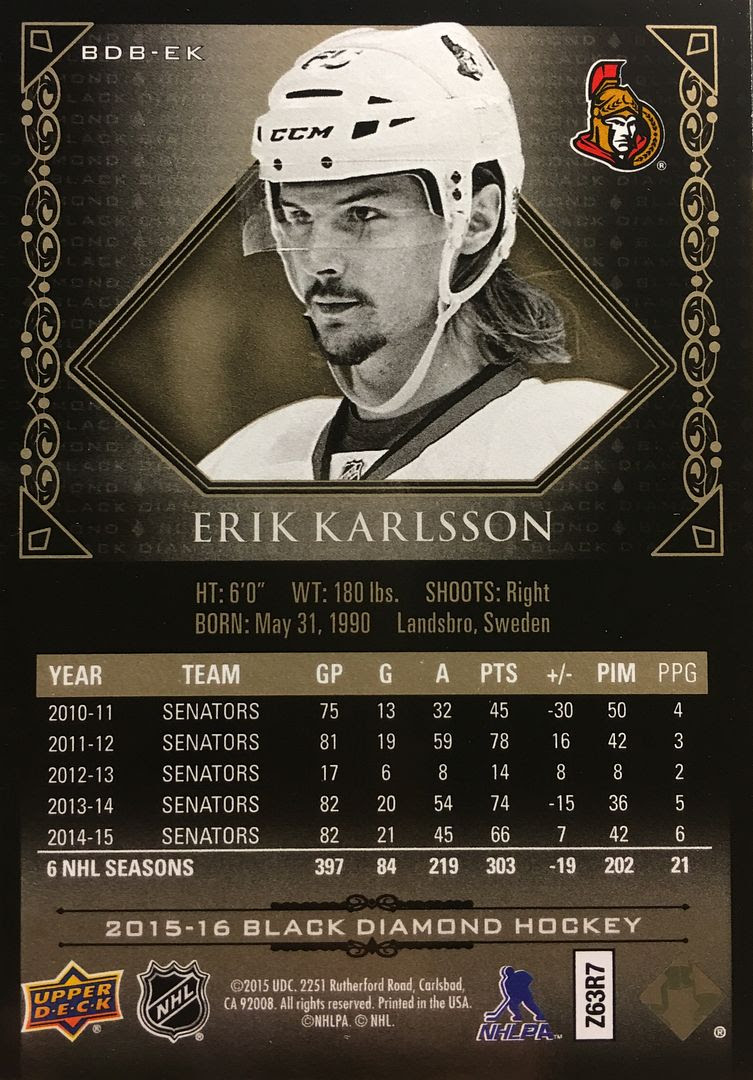 The back of the base card also features and elegant looking design. Just like the front, the back exudes quality. There's a simple beauty here that screams of higher-end card designs. It's a job well done by Upper Deck. One more thing I'd like to mention is the card numbering. These cards don't have standard numbering. Instead we get 'BDB', which I'm guessing stands for Black Diamond Base. Next to that is a two letter abbreviation for the player. Why did UD choose to do it this way? Beats me!

Rookie Gems are back this year but this time some contain real gemstones in them. I guess when Upper Deck elevates a product they really go all out!

Inserts/Game-Used/Autos -
Being a one pack product now, all the hits in Black Diamond have been concentrated into a single pack. Gone are all the extra base cards you used to get normally - it's just hits and limited serial numbered stuff. Each box also comes with a one-card pack of Exquisite. Exquisite has been Upper Deck's highest end brand in other sports, but it looks like Upper Deck wants to see how it goes with hockey. Lucky for us! 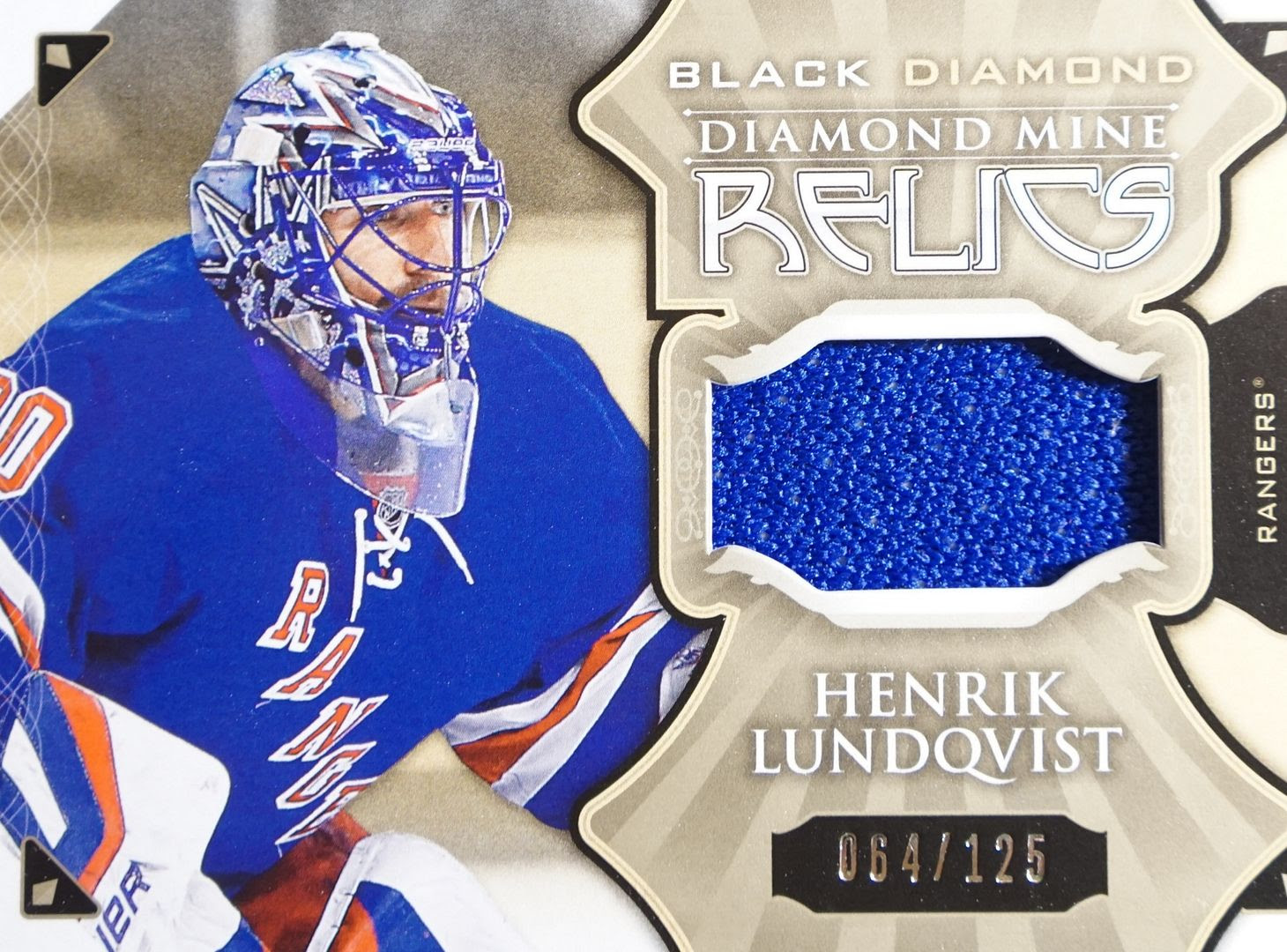 This Henrik Lundqvist jersey card was probably the most basic hit out of the break. It features serial numbering to 125 and contains a relatively small piece of jersey. For being just a jersey card it is pretty girthy - patch thickness. I guess higher tiered versions of this type of card would have better memorabilia embedded within. 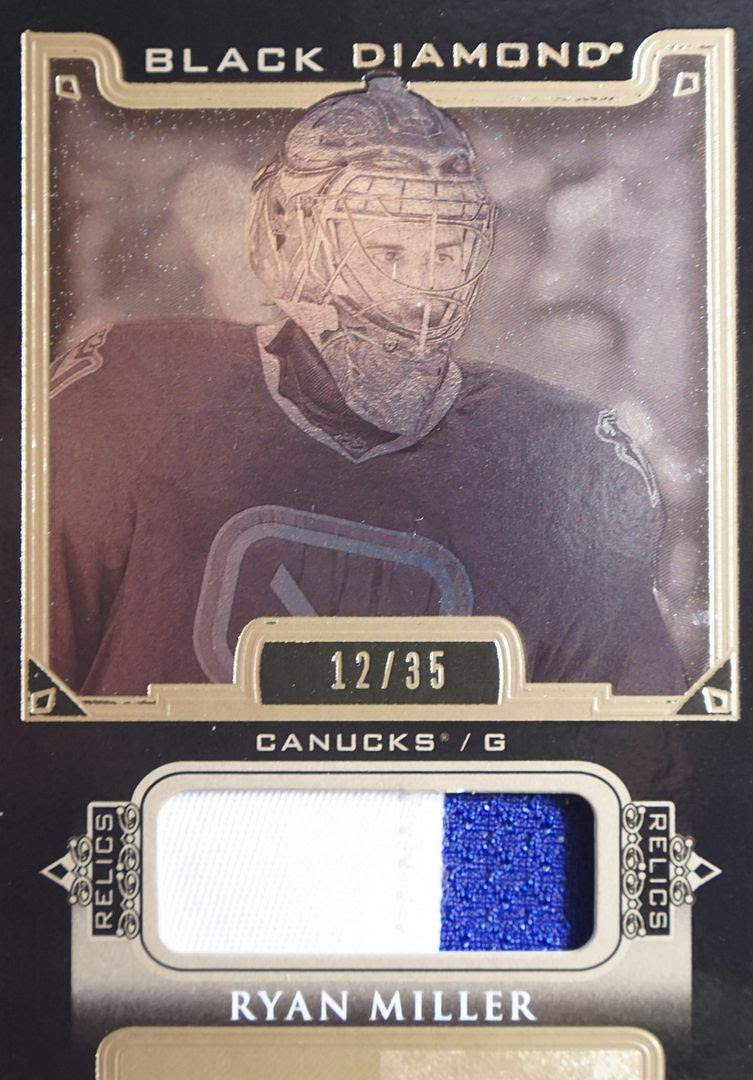 A better memorabilia card was this patch parallel card numbered to 35. It features a medium piece of patch where the team logo was on the base card. The placement of the patch piece is just about perfect and creates the look of a well-balanced card. 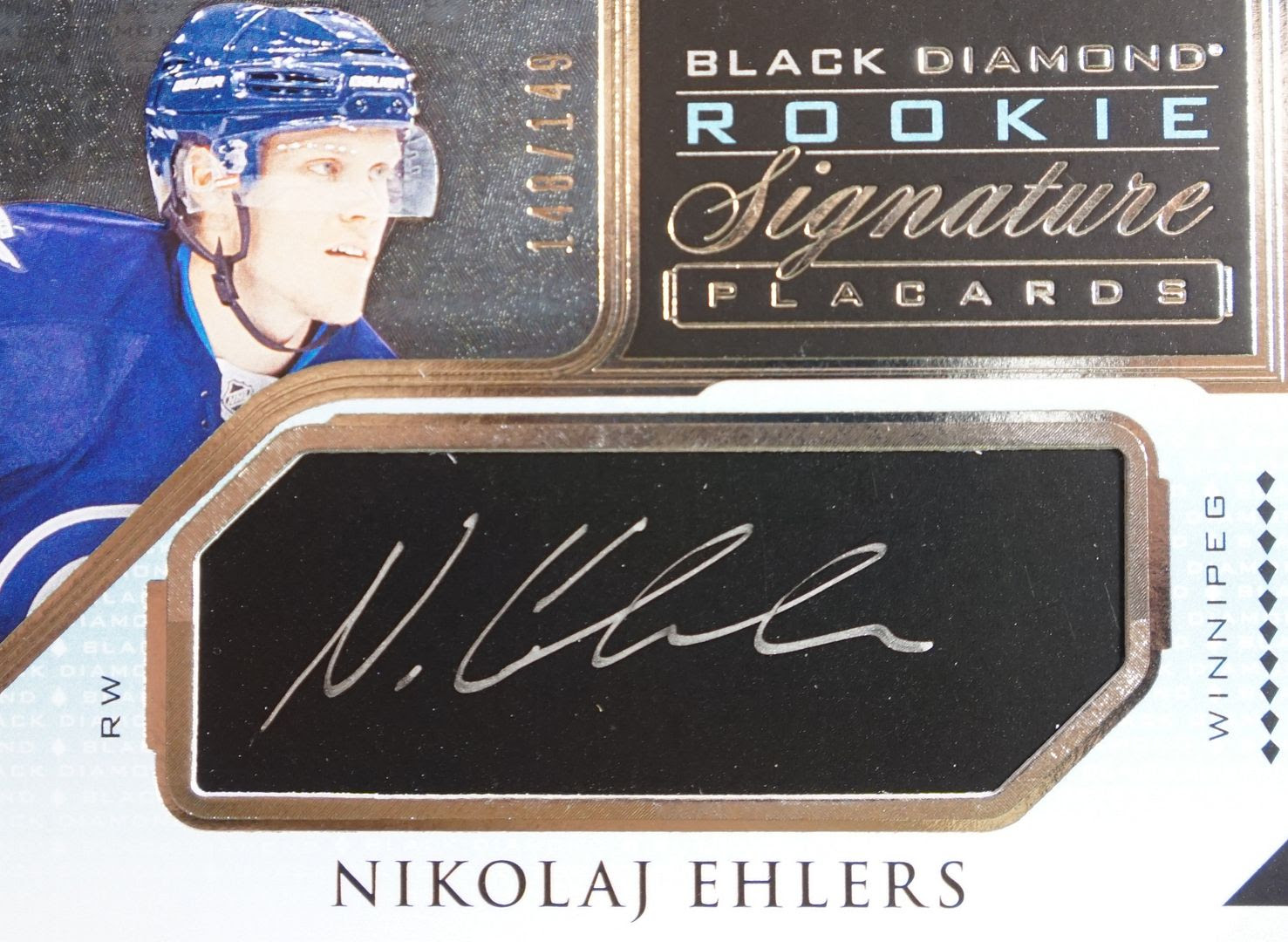 The autograph I pulled was part of the Rookie Signature Placards set. These cards remind me of Draft Boards, but rather than having those, the rookies have signed on a piece of generic plastic board. The cards look good enough, but I can't help but feel these cards are trying to use the appeal of The Cup Draft Board cards to gain popularity. 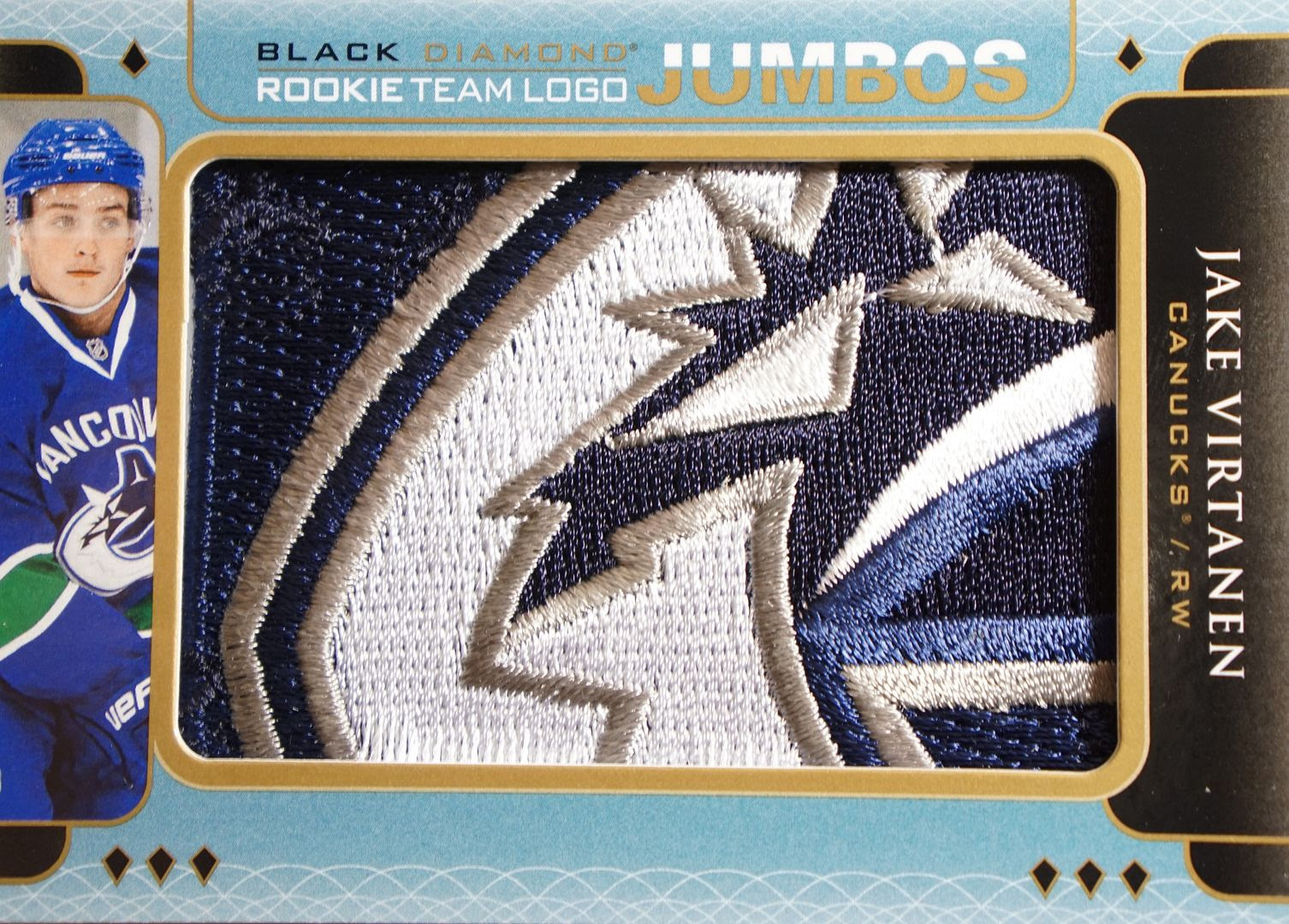 The card I disliked the most out of my pulls was this manufactured giant patch card. Upper Deck has been doing this in a few different sets throughout their brands recently. I dislike the fact that these patch puzzle cards look so much like a really sweet hit when it is anything but that. I'm sure there were more than a few collectors who initially thought they had pulled something awesome from their pack. Let's just get rid of these types of cards, please! 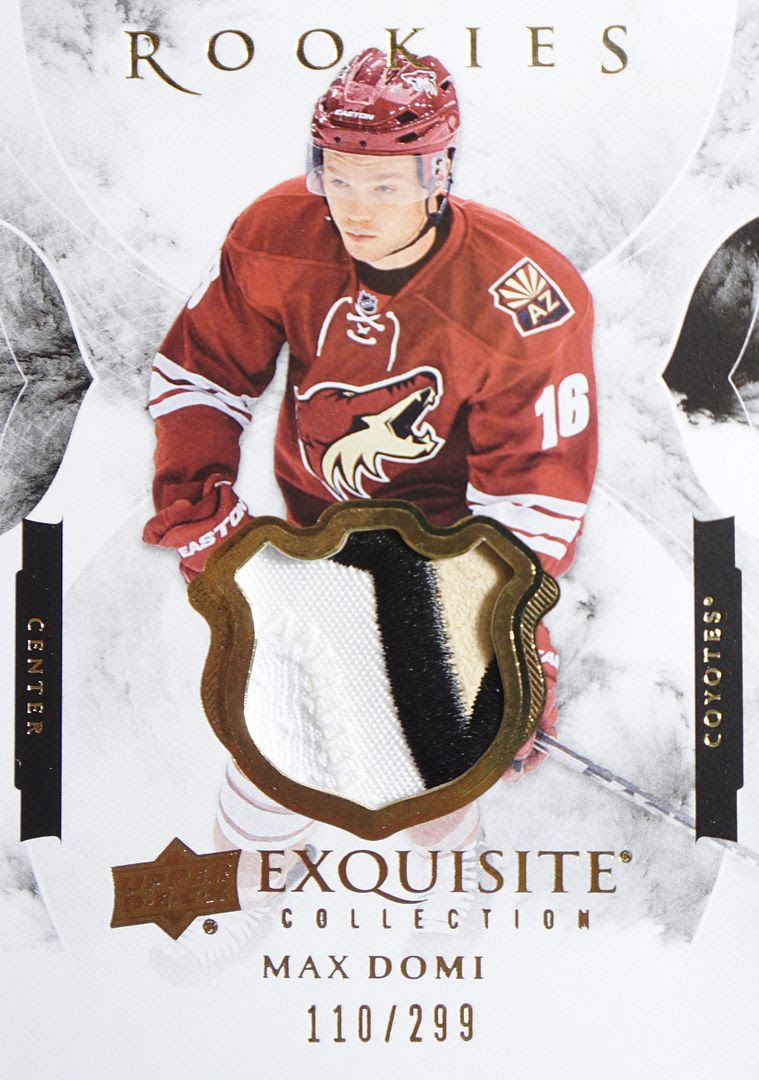 My Exquisite pack netted me a nice patch card of rookie Max Domi. I think the Exquisite treatment for hockey really works. It's pretty awesome to get an Exquisite card as a bonus here. There are a lot of Exquisite cards possible to pull... even base cards... so what you get can be really hit or miss.

Aside from my pulls, there are so many other things that collectors can get out of Black Diamond this year. I'm sure the biggest draw must be the real diamond cards though. I'm sure those will fetch a very pretty penny.

Overall Rating:
I have seen some very negative reaction to Black Diamond on the web. And I can totally understand the points that people are making. I mean, Black Diamond as we knew it just doesn't exist anymore. Maybe Upper Deck could have done something more gradually, but they decided to go all out and re-vamp the brand. I don't think that's a bad thing at all. It's pretty cool that Black Diamond is now an upper tier product. I mean... with the word 'diamond' in it, it should be!

Though the cards look great and you can even get Exquisite cards in your box, there are aspects of Black Diamond that I absolutely don't like. The biggest is the manufactured patch puzzle card. I think those cards just don't need to be here, or in any product... ever. I also think that for the asking price of around $250 there should be a better amount of actual hits per pack/box. As it stands, Black Diamond is firmly in the overpriced category. These are nice cards, but maybe just not that nice.