It's so interesting how some brands work so well at the hobby level, but so terribly a the retail one. That's Upper Deck Artifacts. I would rarely hesitate to buy and bust open a box of hobby Artifacts because I know there is a good possibility of getting something solid in it. That's the exact opposite when it comes to the retail version. I'll be lucky if I get even one non-base card! 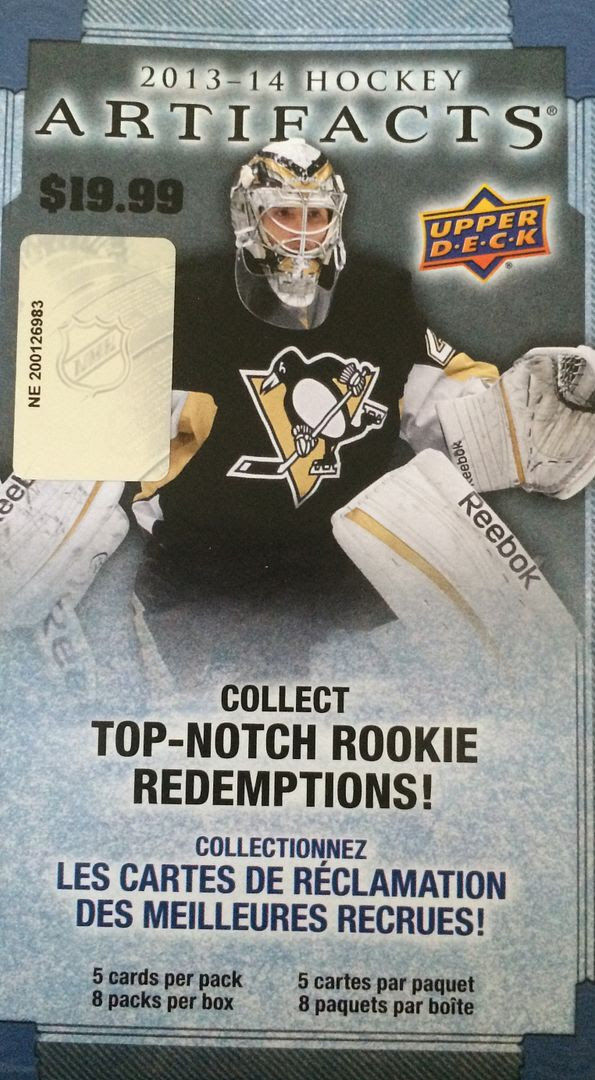 I'm not sure what Upper Deck is trying to do with Artifacts at the retail level. The box states that you can get this and that, but actually getting any of the stated stuff is pretty rare. It can be frustrating for someone who is just trying out hockey cards to look into a blaster of Artifacts. Usually it's just base card after base card. A rookie card might be a very cool thing to at least look forward to, but Artifacts won't give you one of those too often.

The brand name of Artifacts probably comes from the fact that you can find all sorts of memorabilia in the product. Well, that's true of hobby versions of the product, but not here. I'm not digging much treasure out of these little guys... and that's too bad!

Let's open up this blaster of Artifacts and see what comes of it:

Review -
Just as I thought, really there wasn't too much of interest in this blaster. There were lots and lots of base cards, but at least there were a couple serial numbered cards along with some solid stars in the packs. It was fun pulling older guys like Pavel Bure and Eric Lindros out along with Malkin and Crosby.

Can't say too much more about this blaster as it was pretty dry. Let's just get to the top three: 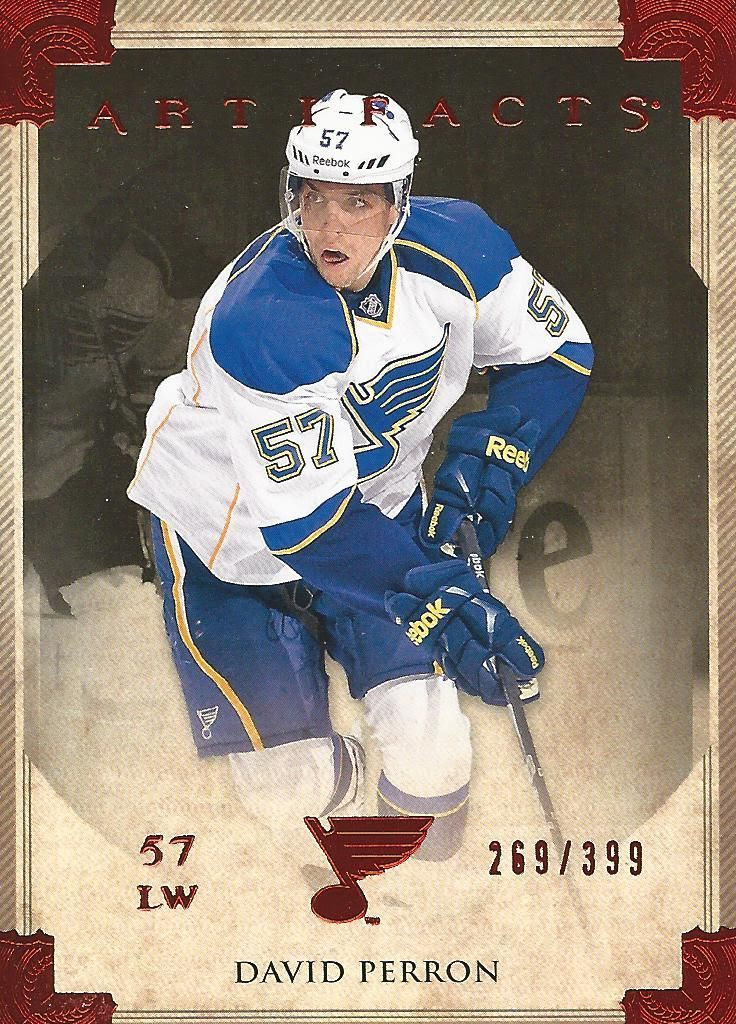 #3 - David Perron Card No. 19
Not a big name player in the hobby, but at least this card has some special serial numbering on it. In all honesty, this card is probably really worth just as much as a standard base card. I'm not sure who's knocking down doors looking for this card. 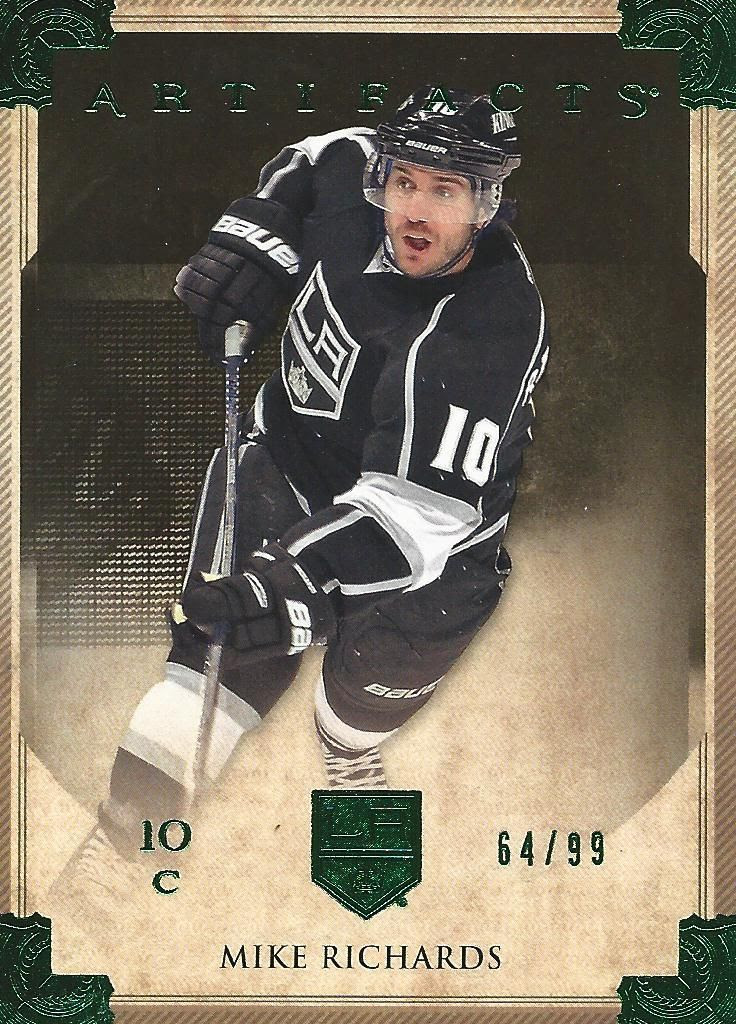 #2 - Mike Richards Card No. 68
Well, 99 is a much better number than 399, so Mike Richards gets spot number two. A card numbered to 99 can be good, but there's not too much going for this card. It may be worth a bit more than the regular base version. 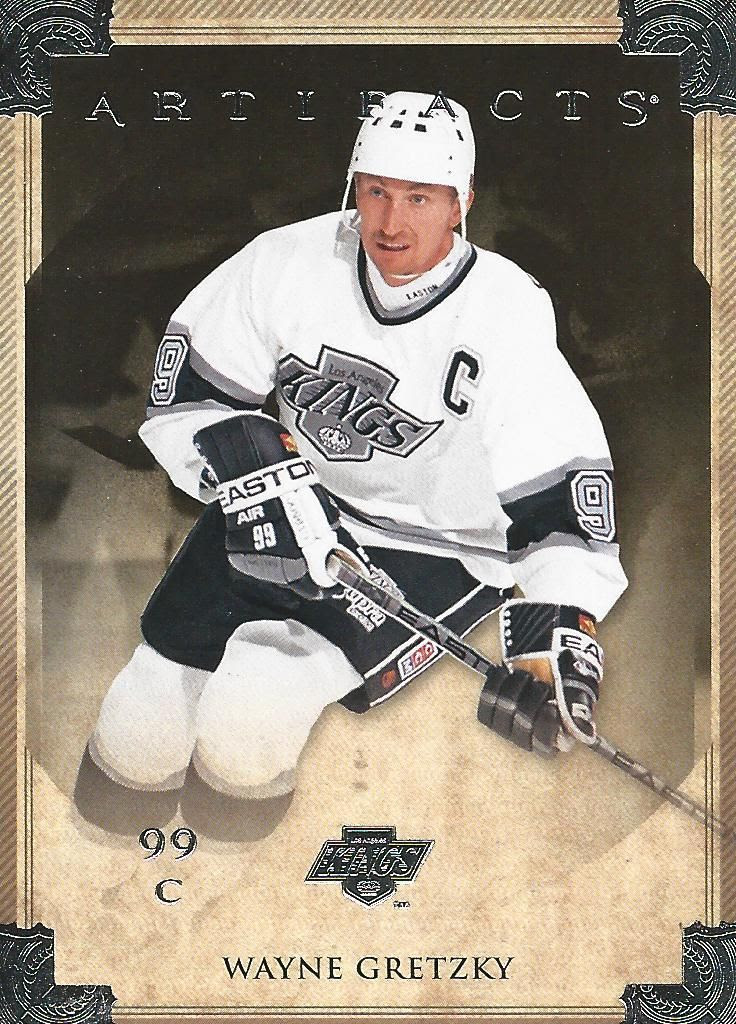 #1 - Wayne Gretzky Card No. 98
My top card from this break has no serial numbering affixed to it. It's just The Great One's base card in the set. This card is probably worth more by itself than either of the previous serial numbered cards just because it is of Wayne Gretzky.

Overall Value -
There's no surprise here. Artifacts is a bad value at the retail level and I would advise you to steer clear of it. Save your money and buy one pack of hobby Artifacts over an entire blaster of the retail version! It's the right choice!

Look for a new episode of Retail Review every Sunday!
Posted by luke. at 6:31 AM