It seems as if there has been quite a gap between releases recently, but the time has finally come for one of the most anticipated brands of the year, SP Authentic. SPA has been a staple product for Upper Deck for many years now. Just like they do every year, collectors will be clamoring to complete their Future Watch autographed sets - a tough challenge, but one that can definitely be accomplished. 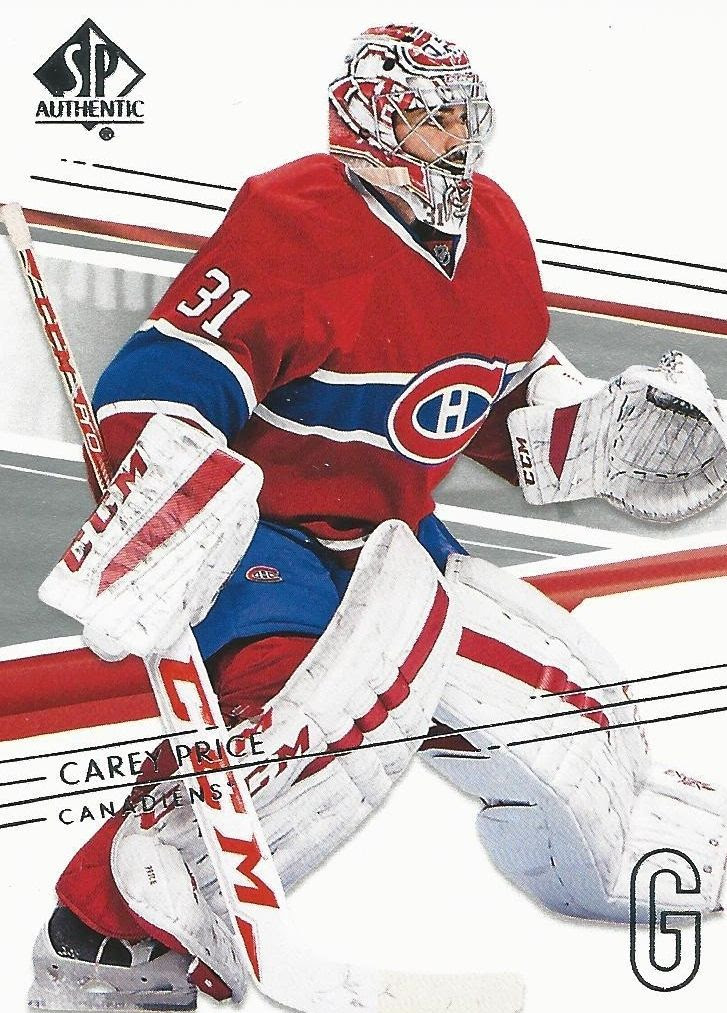 Base Card Design -
Although these SP base cards retail their traditional white card stock, there's a lot more going on with their design. This year's base cards add quite a bit of color and movement. As you can see, there are lines crossing the card's background dynamically along with foil highlighting the player's name and position. I personally prefer a simpler design, but I can appreciate the fact that Upper Deck is trying to change up the feel of the cards a bit. This year's base remind me of the SPA base cards of the mid 2000's. I mention that fact in my video break of my box of it. Perhaps we're just back to that point in the design cycle!  Overall it's a look that definitely falls in line with the look that SP Authentic has gone for - a solid effort this year - just not my personal cup of tea. 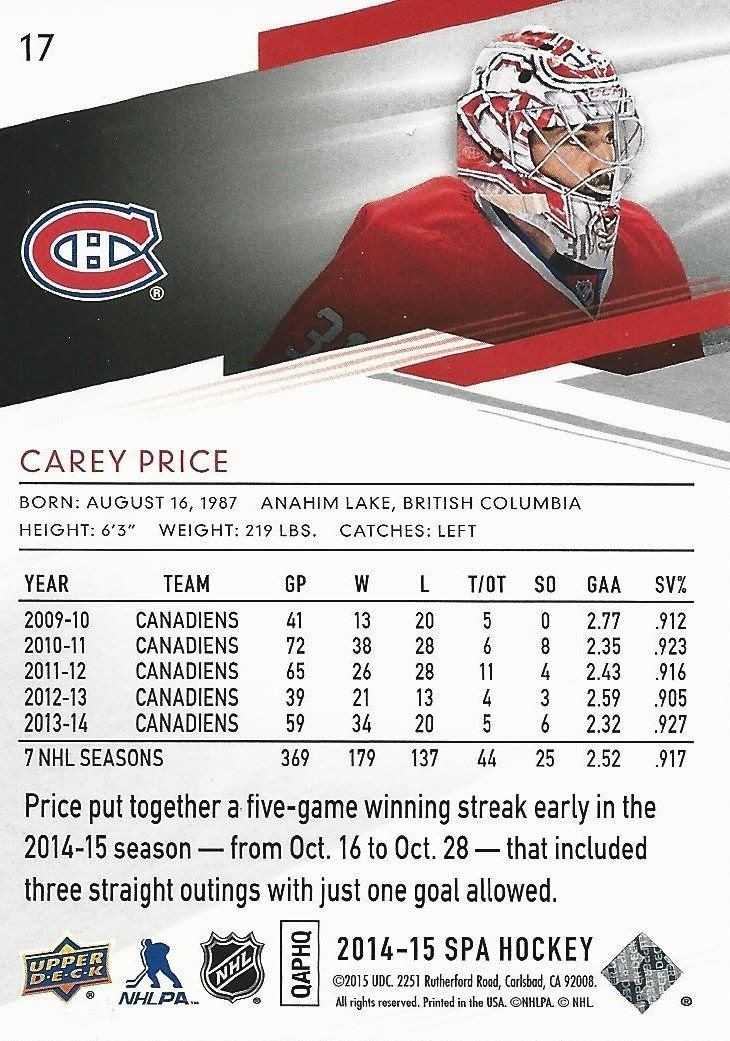 The back of the base card is instantly recognizable as SPA - you can really just tell. Here the design is simple and easy to follow. Upper Deck includes all the relevant information needed as well as a short write of below the player's stats. The back of the base card goes well with the front, and the same photo of the player ties the two together well. Is this back super exciting? Well, not really, but it certainly is functional and neat. No complaints, but nothing that wows either. 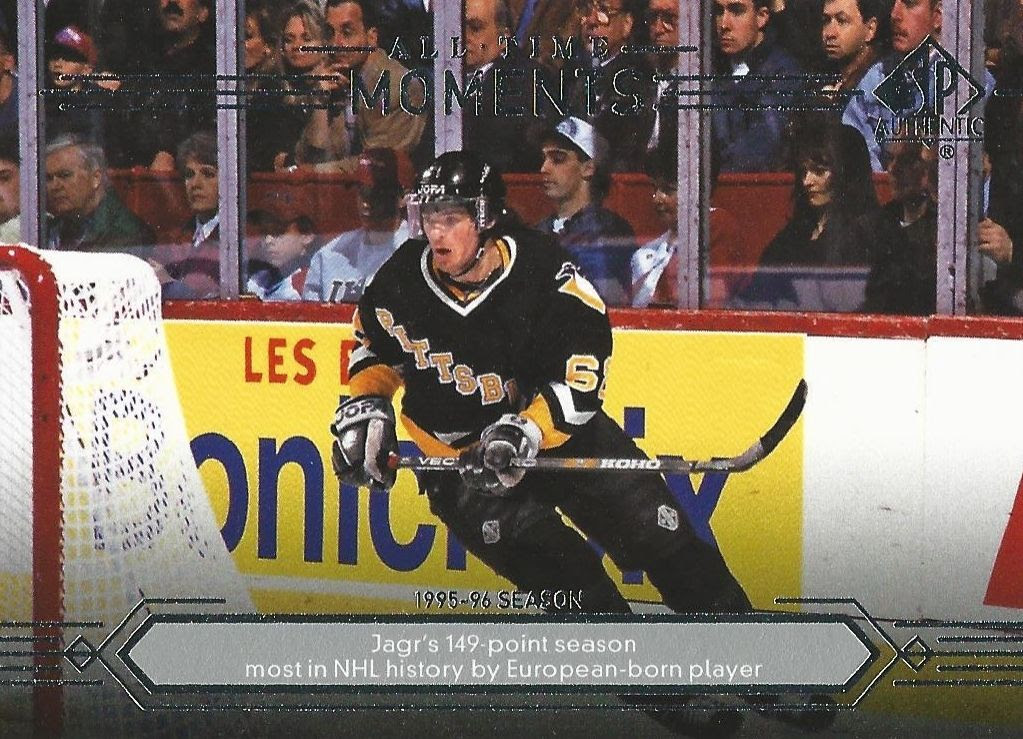 Last year Upper Deck started putting cards that featured full-bleed photography in the set. This concept returns with their 'Moments' subset. These cards highlight different important moments in NHL history. There are moments that span all through the history of the NHL. The cards look very nice, but have a distinctly non-SP feel to them. They are more in line with the standard Upper Deck Series 1 and 2 sets. These cards mix it up in terms of the basic set, but still feel a little out of place. 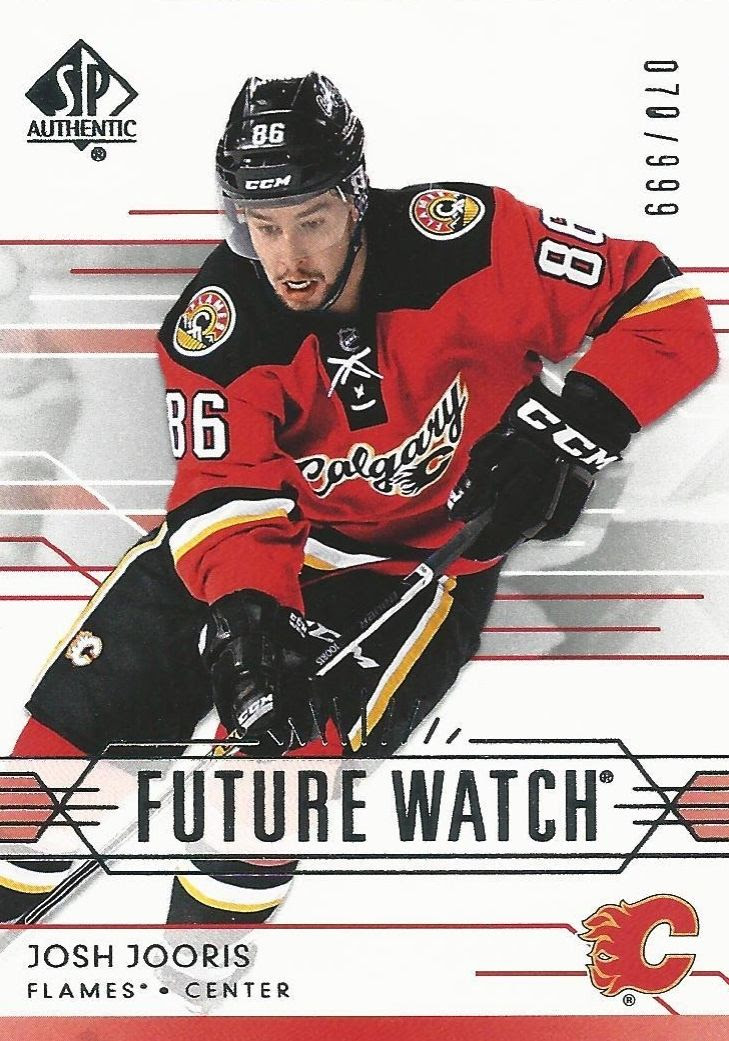 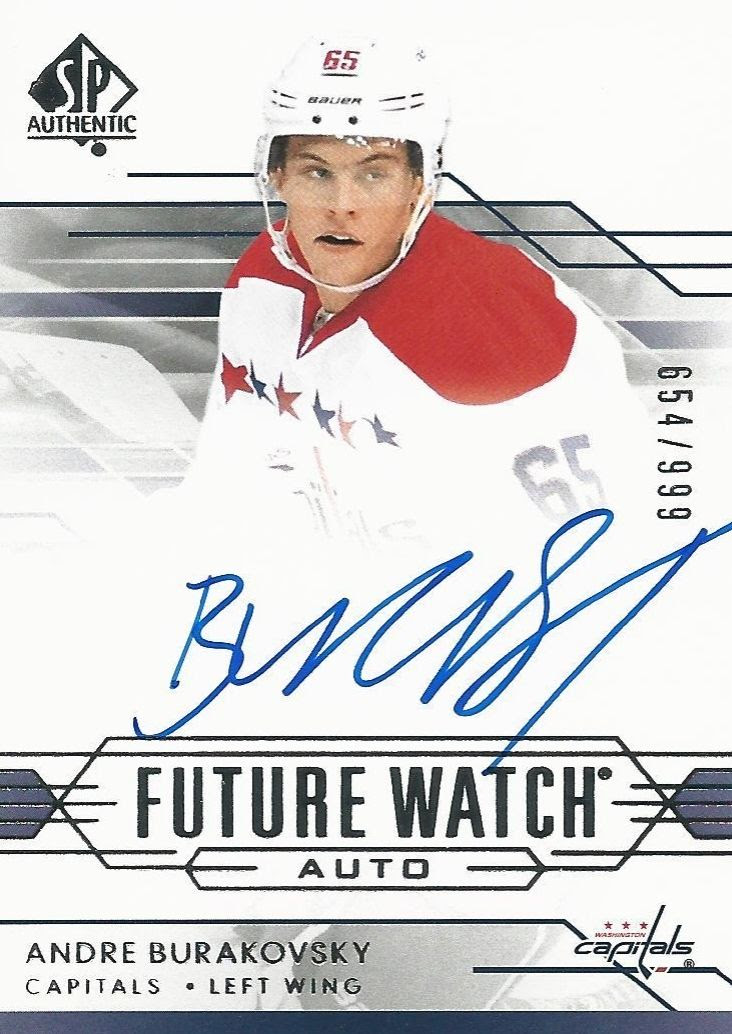 The autographed version of the FWA cards lose a bit of the speedy effect because the space for the autographed has been left blank for the player to sign. These cards are also numbered to 999 but feature an autograph in blue ink. These cards will be popular again as they always are. I do, however, find myself liking the non-autographed look a little better than the ones with a signature though.

Inserts/Game-Used/Autos -
The box states that collectors will find three autographs inside with at least one being a Future Watch Autograph. In my box, I happened to get all FWAs as my hits. Boxes come with 20 packs in a configuration that is very similar to the UD Series 1 and 2 box. It definitely feels weird with that configuration. I liked the three rows of SPA packs! 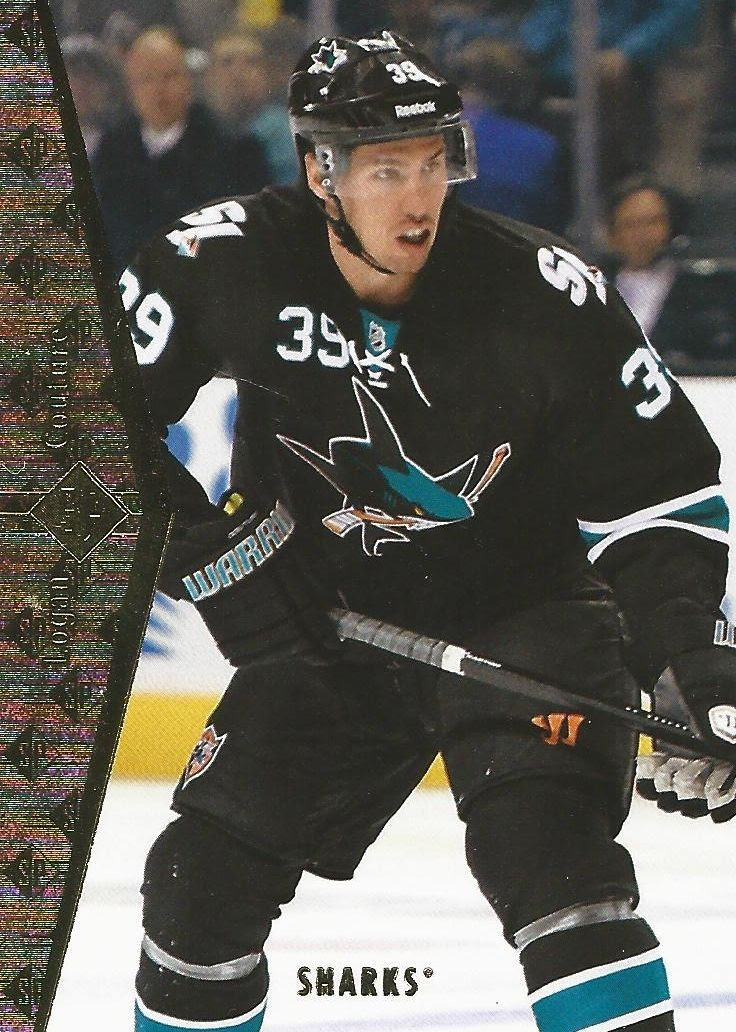 Retro cards have been a huge point of emphasis for many card companies, and that trend continues here as retro SP cards can be found in SPA boxes this year. These cards look like the old '94 SP cards with their gold foil side-border. It's a very accurate representation of what the cards used to look like! Prospect cards are also available in this same design as well with a special prospect stamp on the front. Die-cut and autographed versions of these cards can also be found as well. 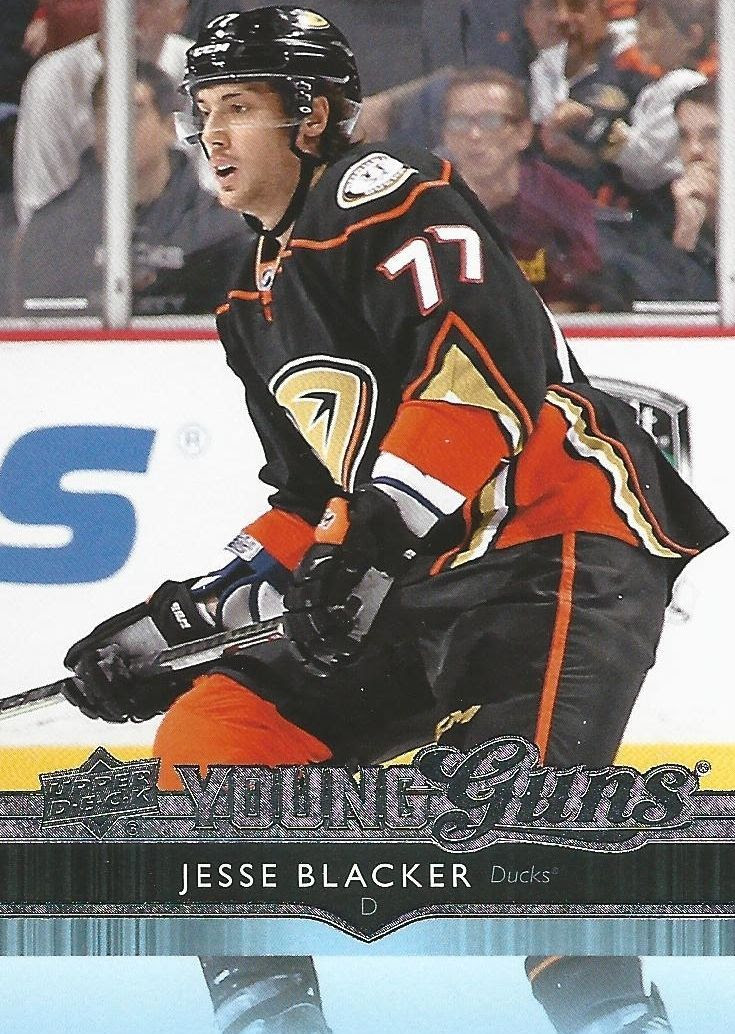 I was surprised to find UD Update cards in my box of SPA this year. Yes, Series 1 and 2 have already come out, but Upper Deck has given collectors an even more updated collection of cards for their sets. These cards really round out the Upper Deck set and act almost as a Series 3! It's nice to get both Young Guns and Future Watch cards in the same box. Pretty cool.

Sadly, I didn't get any other types of hits in my box of SPA. I would have loved to get a Future Watch Patch card, but that didn't happen. Marks of Distinction and Immortal Inks are back along with Chirography and Sign of the Times cards - although it looks like this year's SOTT autos are actually pretty tough pulls! That's certainly different! It would have been really nice to at least get one different hit in my box, but that's just the way it is sometimes!

Overall Rating -
SPA is pretty much the same reliable product that you can get every single year. If buying by the box, you're really taking a gamble on getting something good (as you could see by the box I got). Cases will yield much better results. If you're a collector who wants the FWA set, I definitely suggest just going for singles. Many of these rookie cards can be found for well under $10.

SP Authentic is a solid set with nice potential and a great heritage. I definitely would recommend giving SPA a try. There are quite a few different hit types to get as well as some older re-inserted hits as well.

All-in-all, you know exactly what you'll be getting with SPA - a solid product, on-card autographs, and a chance at some very sweet hits.