I love the time in the hockey season when Upper Deck Series One comes out. This is THE set that all hockey collectors no matter what will get at least a bit of during the season. Upper Deck's signature set is consistently beautiful and a great celebration of the game on ice. 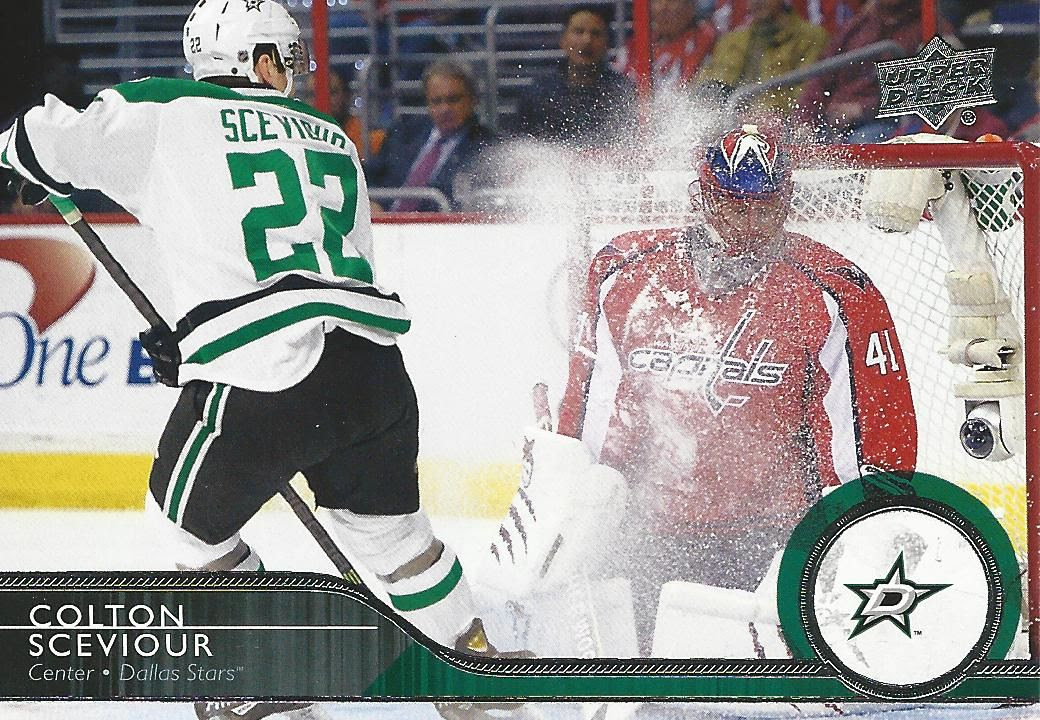 Base Card Design -
Upper Deck does not go wrong with this iteration of Series One. The cards are clean and crisp and 'oh so beautiful'! The photographs pop off the cardboard with a glossy sheen. As Upper Deck has traditionally done with this set, the cards are all about the photographs that adorn them. The images are stunning to look at, and it's a thrill to just flip through the set and enjoy the pictures. The graphical elements on the front of the card are minimal and out of the way. They compliment and provide a nice frame for the card. The fonts and colors used are very modern... really a superior design. 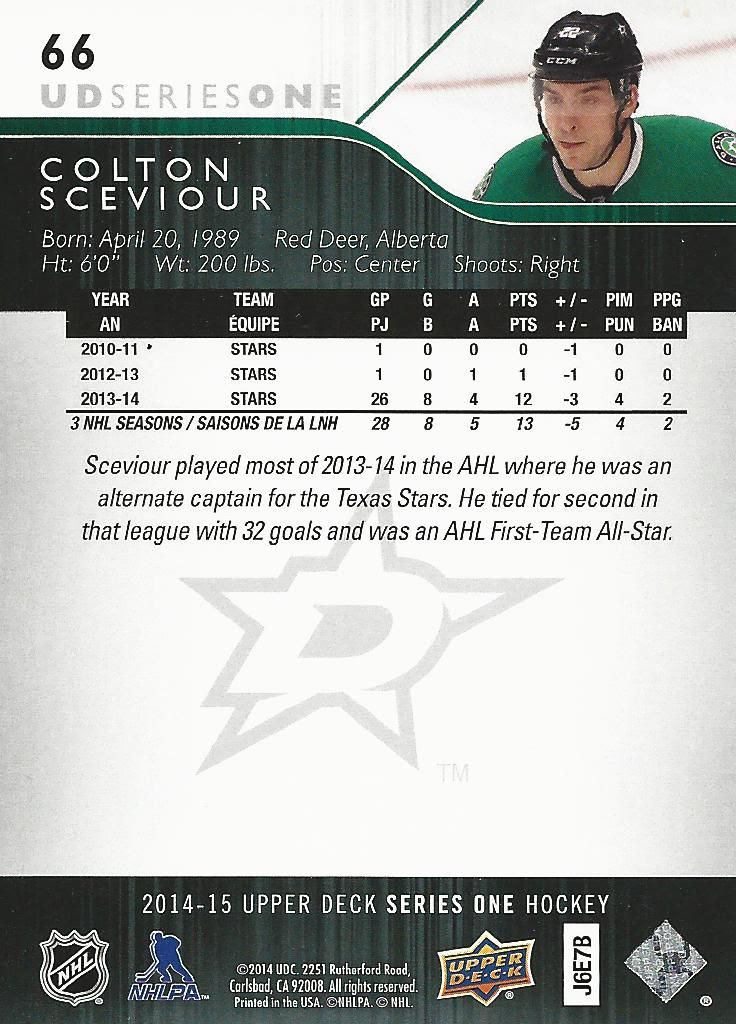 The Series One backs do a great job of utilizing the front elements, but overall the card backs don't excite too much. It's a very traditional Upper Deck card back that looks good, but doesn't overwhelm in terms of eye appeal. 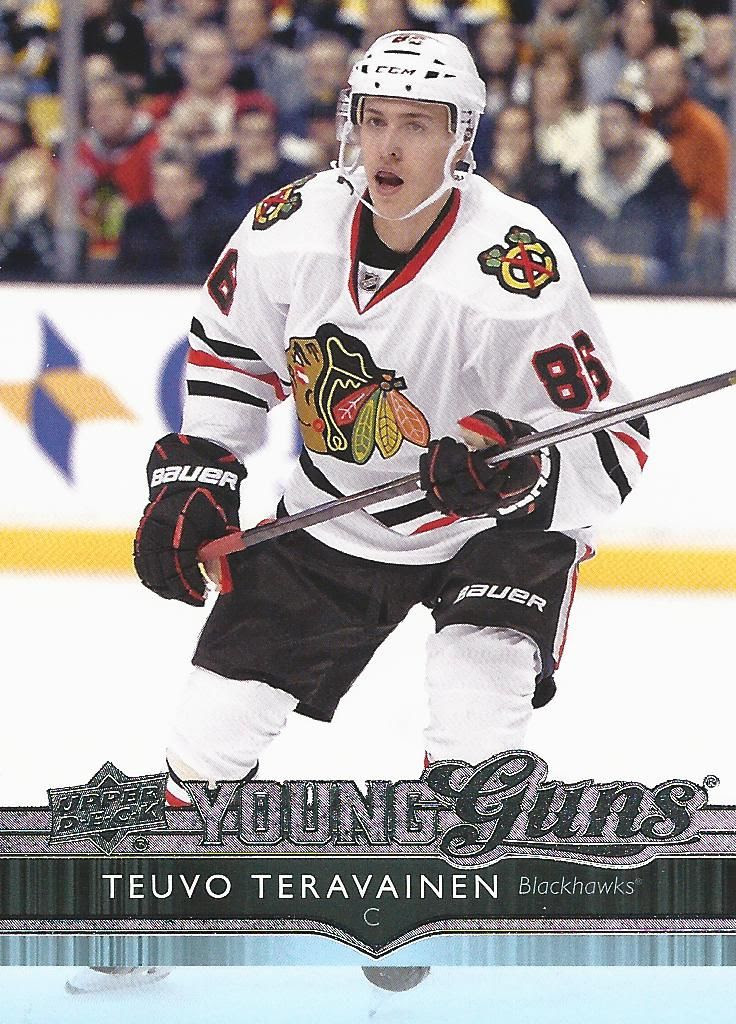 The Young Guns this year come with a fresh and exciting look. The look this year is a bit reserved, but I really did enjoy the actual 'Young Guns' marquee that was used this year. The silver foil and the light blue work well together on these cards. My only complain about the Young Guns cards is that if you go through the card quickly in the pack they can be missed as they have a similar feel and look to the standard base cards. Other than that I would say that these Young Gun cards are a great addition to the overall Young Gun card line-up.

Inserts/Game-Used/Autos -
If you're buying a hobby box of Upper Deck Series One you can expect to find two memorabilia cards and a smattering of inserts and parallel cards. Though Upper Deck can be considered a mid-lower-end brand, Upper Deck has inserted some very short-printed and extremely desirable cards for collectors to find. One of the the sweetest looking insert cards that came out of my break of Series One was this blue parallel Wayne Gretzky Shining Stars card. The card looks like a jewel shining in the light. Standard versions come on a silver foil backing. These Stars Inserts remind me a little of the insert cards once found in Upper Deck SP products in the 90's. There was definitely an emphasis on making a card really good looking first and foremost back then, and these cards do just that. 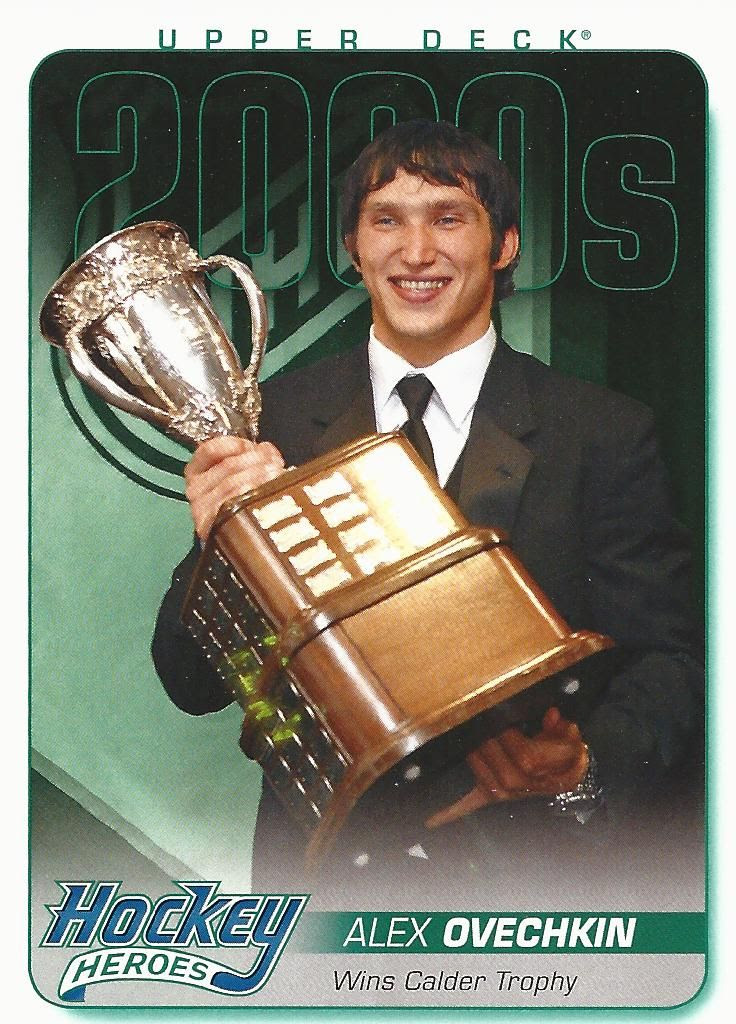 The Hockey Heroes set is back... AGAIN. Ughh. As you can tell I'm not a fan of these cards. Though I like the fact that there is a set that runs through each set of Upper Deck every year, these cards just aren't that great looking. I'm definitely tired of them. Many of the past Hockey Heroes sets have been of retired players. It's a bit strange to see guys like Alex Ovechkin adorning these cards. 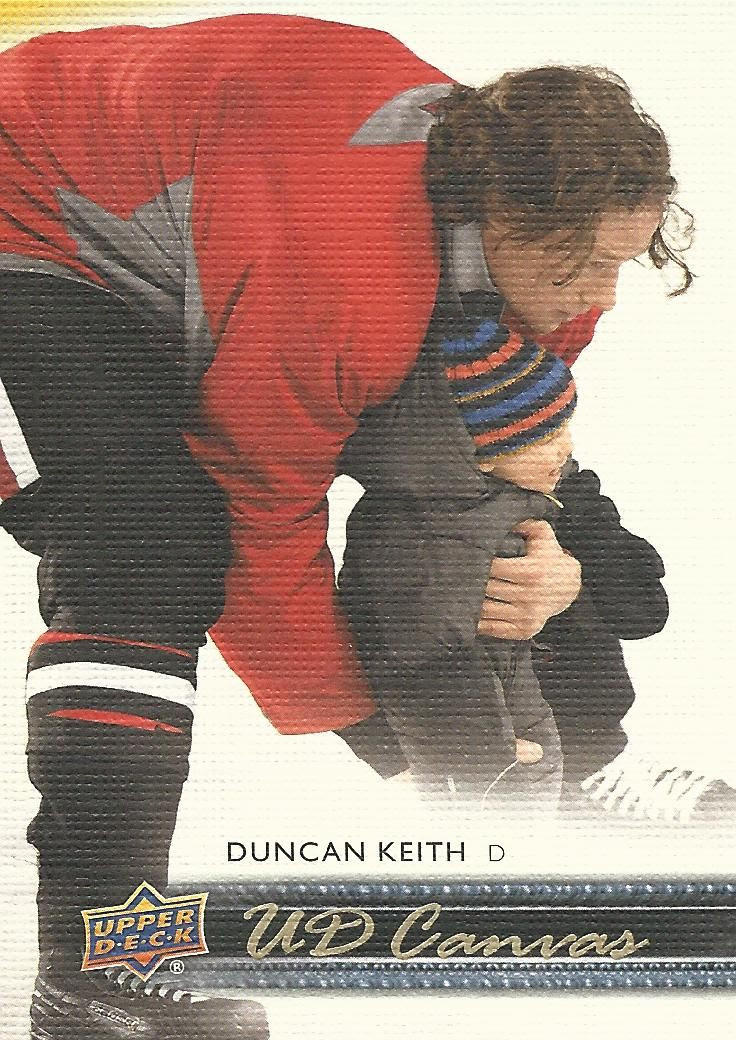 Canvas parallel cards have also been put into Upper Deck packs. These popular cards have a canvas feel to them and feature even more unique photographs than their base card counterparts. I see these cards as being very popular again, especially the Canvas Young Guns... collectors seem to go crazy for them each year. 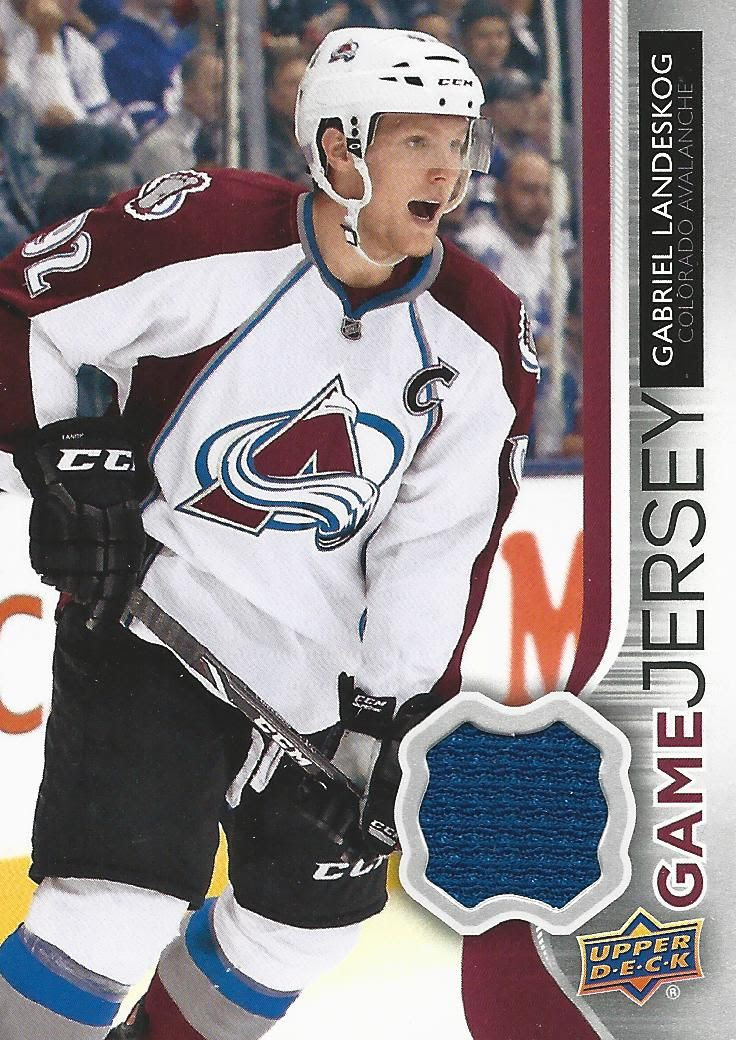 My box of UD1 had the standard two jersey cards inside it. It's nice to be able to pull hits out of Upper Deck, but these jersey cards tend not to fetch much in terms of money value. In terms of design, these Game Jersey cards look good. They are colorful and actually remind me of a base card design with a jersey on it. Super short-printed patch variations of these cards are the ones to really look for in boxes.

Autographs and other short-printed cards are also available in Upper Deck Series One this year. I would have to say that the box I opened was a typical box. If you're able to pull an autograph out of this product, you're doing pretty well. Some of the most desirable pulls this year will be of hand numbered buy back cards from the 90's.

Overall Rating -
As a set of hockey cards, you can't go wrong with Upper Deck Series One... it's just so solid! I would say, however, that many times this set lives and dies by the Young Gun class that it contains. If there isn't a stand-out Young Gun to be found, the set value usually suffers a bit. That being said, there are plenty of goodies that Upper Deck has put into this set of cards that should make collectors drool over.

Upper Deck Series One is a set that I would recommend purchasing 'just because'. And that's the way it is.


Check out my box of UD1 from D&P Sportscards in Sacramento, Ca: