This is that strange part of the collecting year when products from the upcoming season release before last year's final products come out. MVP is available now even though the highest end products like Ultimate Collection and The Cup are still awaiting release. 14/15 MVP is a full release of the brand. Upper Deck had previously used it as an insert in their flagship lines. Let's see how it looks back as its own entity! 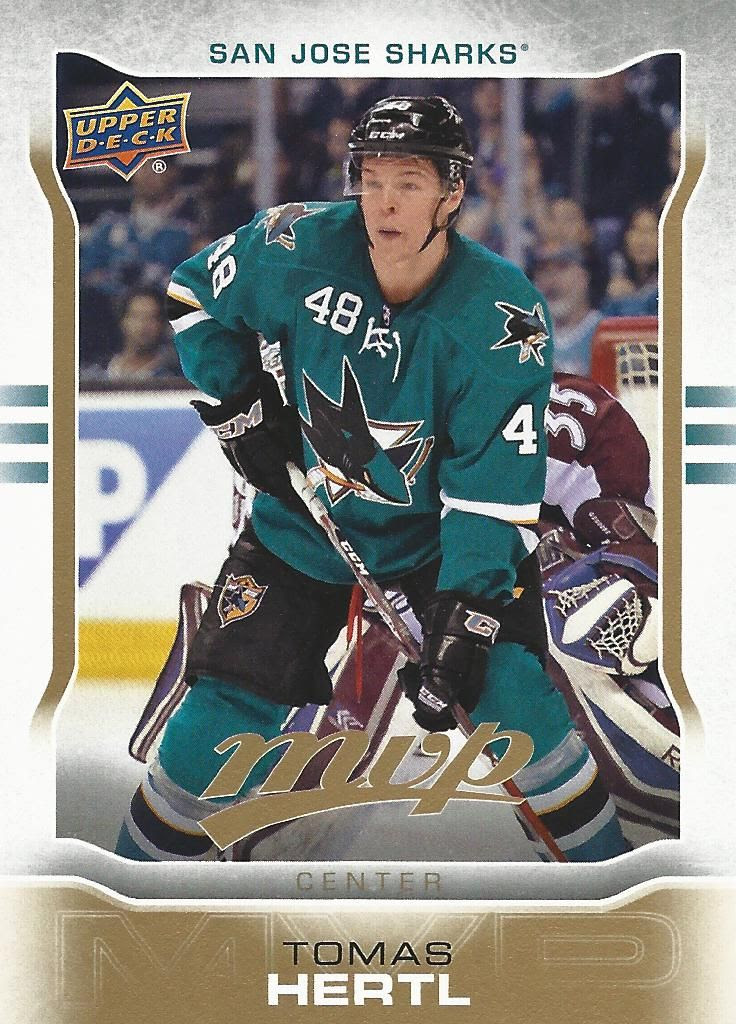 Base Card Design -
The MVP base cards utilize a large border area to encapsulate the card. Each card is primarily white and gold with team color highlights on the borders. The MVP base design goes along with past MVP designs but lacks the touch of premium quality that it used to have. MVP cards had foil on the front to give each card a little pop. Because it doesn't have that, these cards definitely fall a bit flat in terms of their look. It's a cheap looking card that looks lower end. 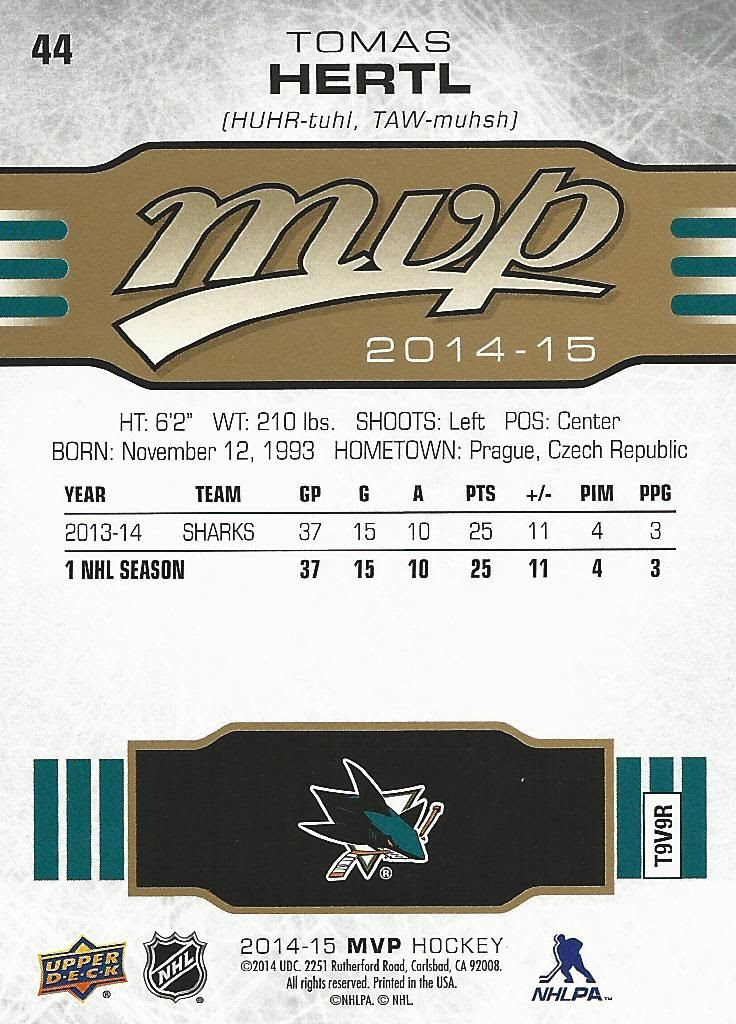 Though there are no photos on the back of the base cards, I rather like the back design. The large gold MVP logo looks good and actually shimmers a bit in light. There are limited stats on the back of the card and no written paragraph of the player - it's definitely few frills - but I guess that's what you pay for! The one thing I do like about the MVP base are the guides on how to pronounce the hockey player's name. That's pretty useful! 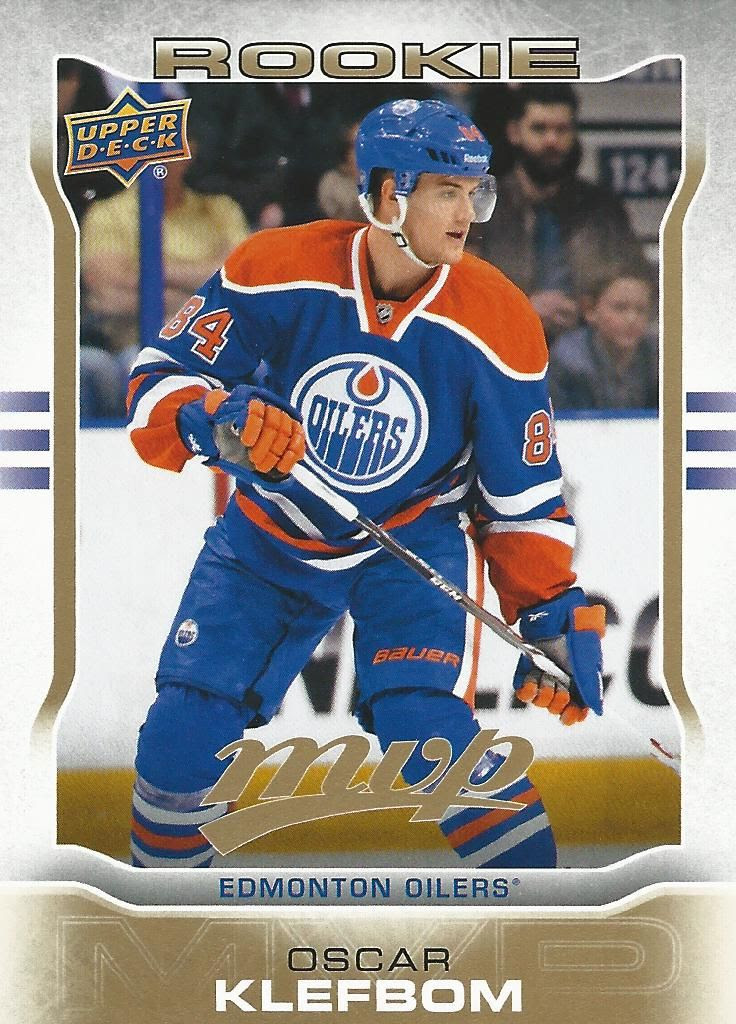 Rookie cards in the set share the same look as the base cards except for a large 'Rookie' logo where the team name was on the standard base card. When MVP was released in Upper Deck Series 1 and 2, the rookie cards had a distinctly different design that I actually rather liked. I'm sad to see that the effort wasn't put into these cards.

Inserts/Game-Used/Autos -
Boxes of MVP will yield parallels, inserts, and maybe even hits in them. This year there are quite a number of different tiered cards to look for. It can be confusing as to what kind of card you have, so refer to the pack or the bottom of the box to check for the rarity. 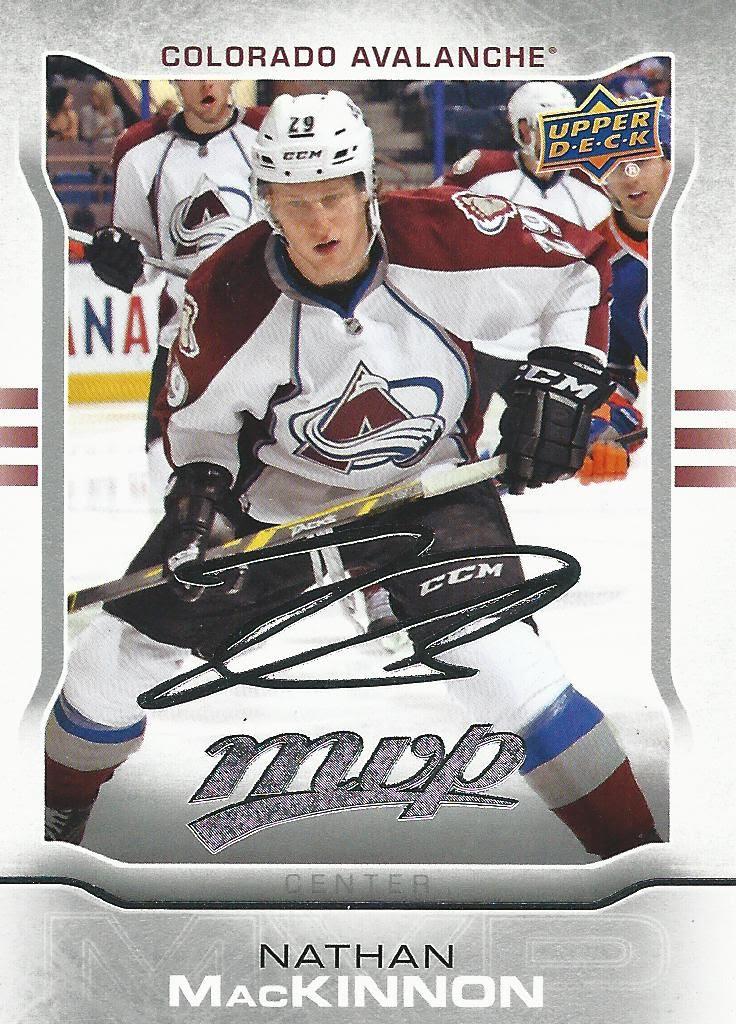 The most basic parallel card comes one-per-pack. And i actually like these much better than the regular base. These parallels are what MVP base cards should be! These cards have the foil and the facsimile signature that MVP has been known the carry. The base card design score would have been much nicer if Upper Deck just had these as their base cards. 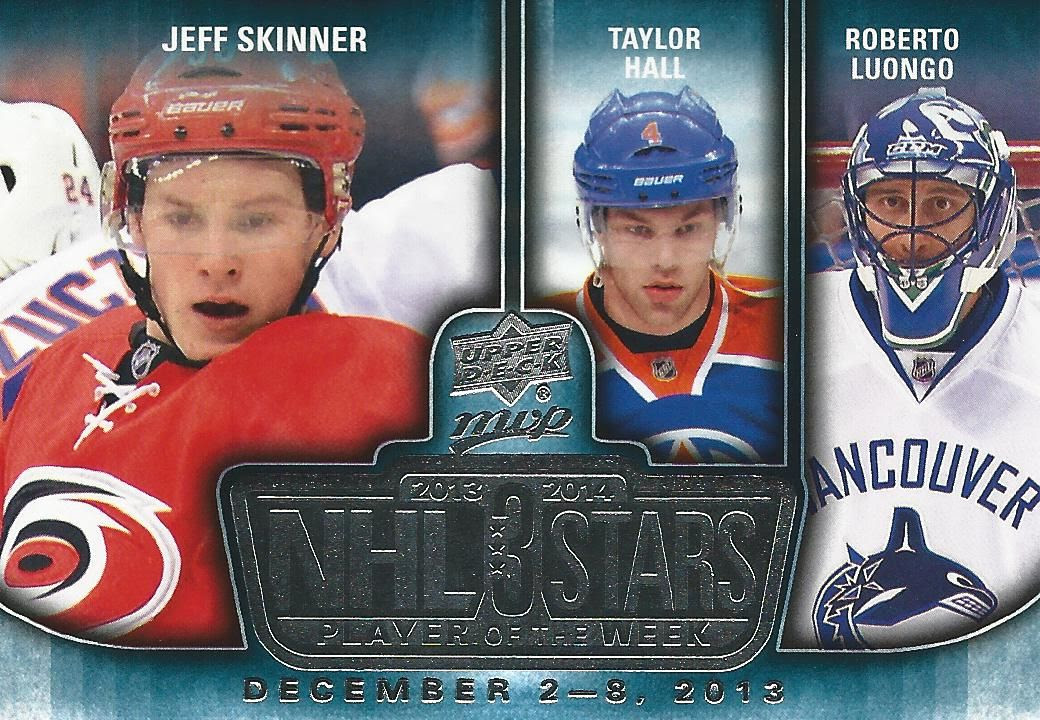 The NHL 3 Stars of the Week cards are a pretty novel idea to put into an insert set. These cards show which players earned that special recognition during the season. I don't remember ever seeing cards like this before. I got to hand it to Upper Deck for coming up with an ideal like this for a card set. 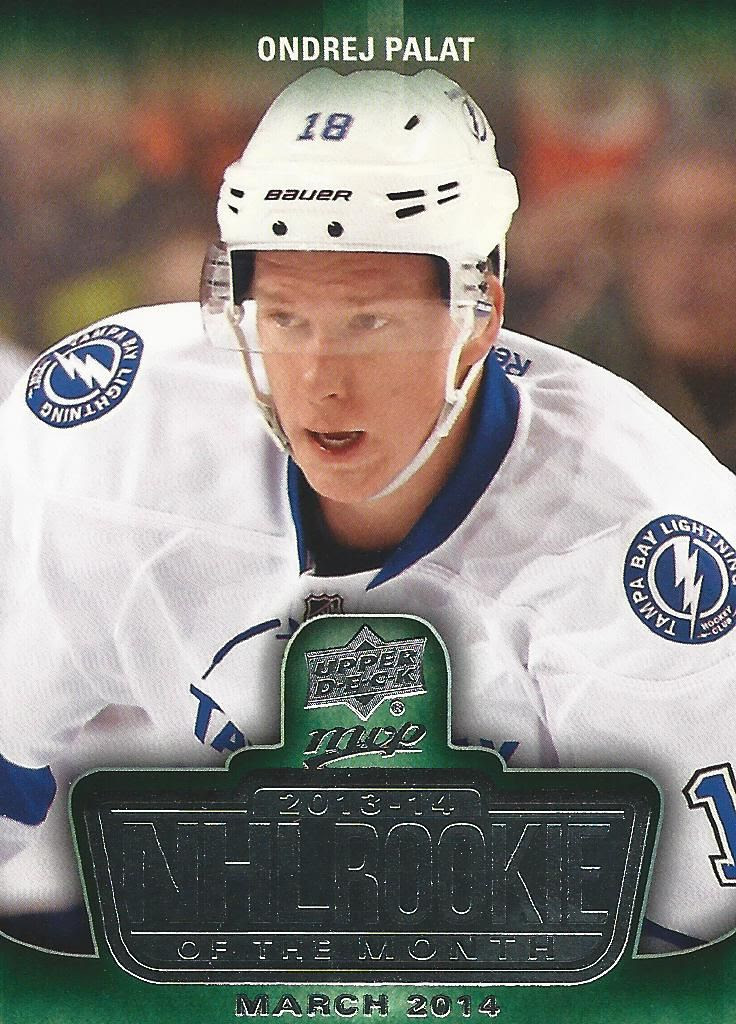 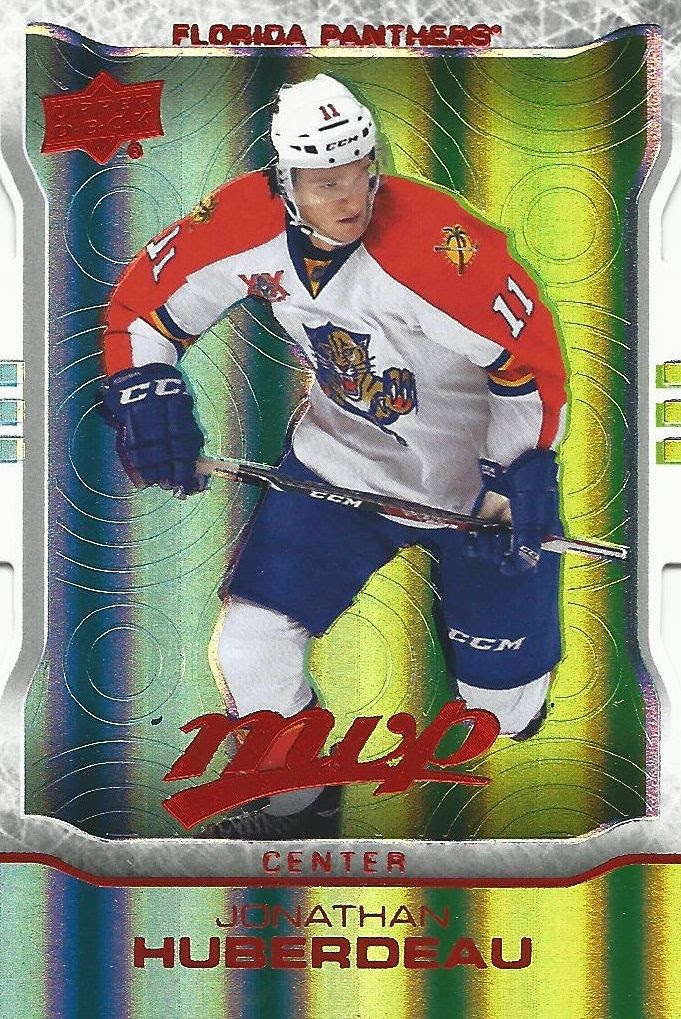 Colors & Contours is a great looking set. The use of foil and die-cutting is outstanding on these cards. When I pulled my first one I thought I had gotten something really special. It turns out these cards have a great variety of different tiers and rarities. Looking on the back of the card will clue you in to what type of card you might have. I imagine that these will be fun for player collectors to track down. I was fortunate enough to pull a Super Script parallel of Shane Doan in the box. These cards use a blue foil and have numbering to just 25. Super Scripts were a popular parallel set when the cards in the past, and hopefully they will be again. 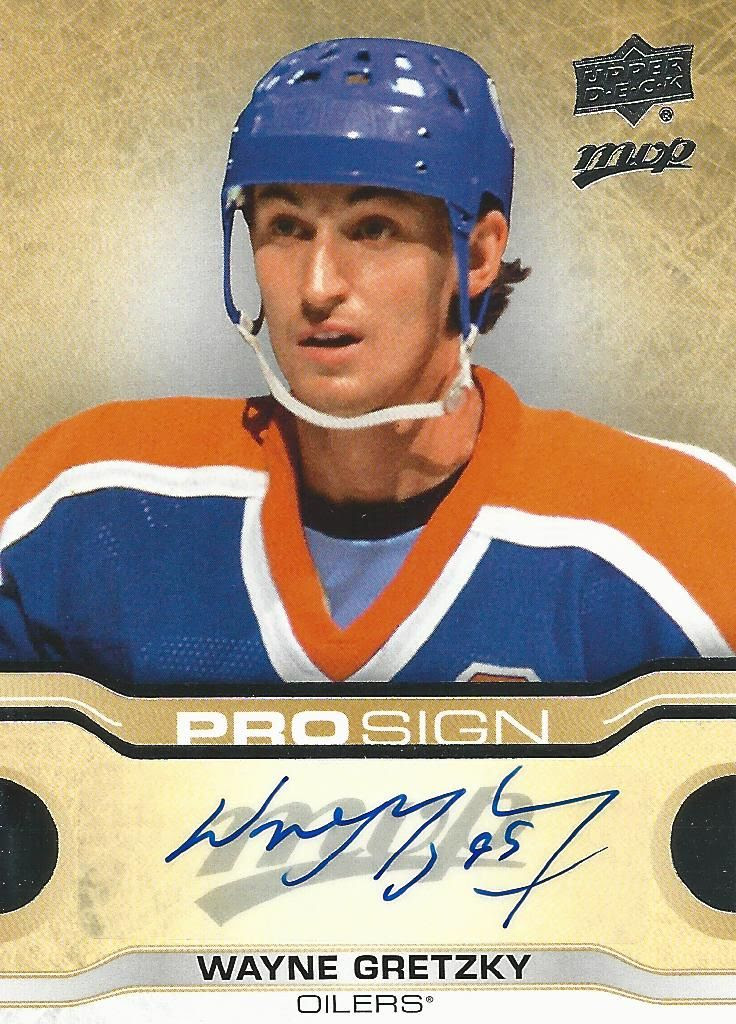 The most unbelievable card I pulled in my box was a Pro Sign Wayne Gretzky card. I just couldn't believe it! It's always amazing when you can pull something like this out of a lower-end brand. It just goes to show that these things can actually happen. It is awesome that Upper Deck inserts cards like this into lower-end brands to give it a boost in terms of what collectors can get out of it.

There are many other types of hits to find in MVP as well. Memorabilia cards and dual autos are available. Rookie redemptions can be pulled too. I would guess that each box of MVP would have one hit in it, but I don't think it's a guarantee.

Overall Rating -
I obviously got really lucky with my box of MVP with the Gretzky autograph, but overall I think MVP is a solid offering by Upper Deck. There are a lot of interesting goodies you can pull out of it this year. I was actually pleasantly surprised. My only qualm about MVP are the base cards, but every other card in the product is a winner. MVP makes a worthy addition to the lower price-point hockey card brands.


Check out my box from D&P Sports Cards: