It's time for another round of Upper Deck SP Authentic. Upper Deck SPA has been a long time favorite of many hockey card collectors. Year after year it offers up on-card rookie autographs in the famed Future Watch rookie set. This year Upper Deck gives collectors what they want and expect from this legacy brand. Why fix what isn't broke, right? SP Authentic just keeps coming out solid through the years. 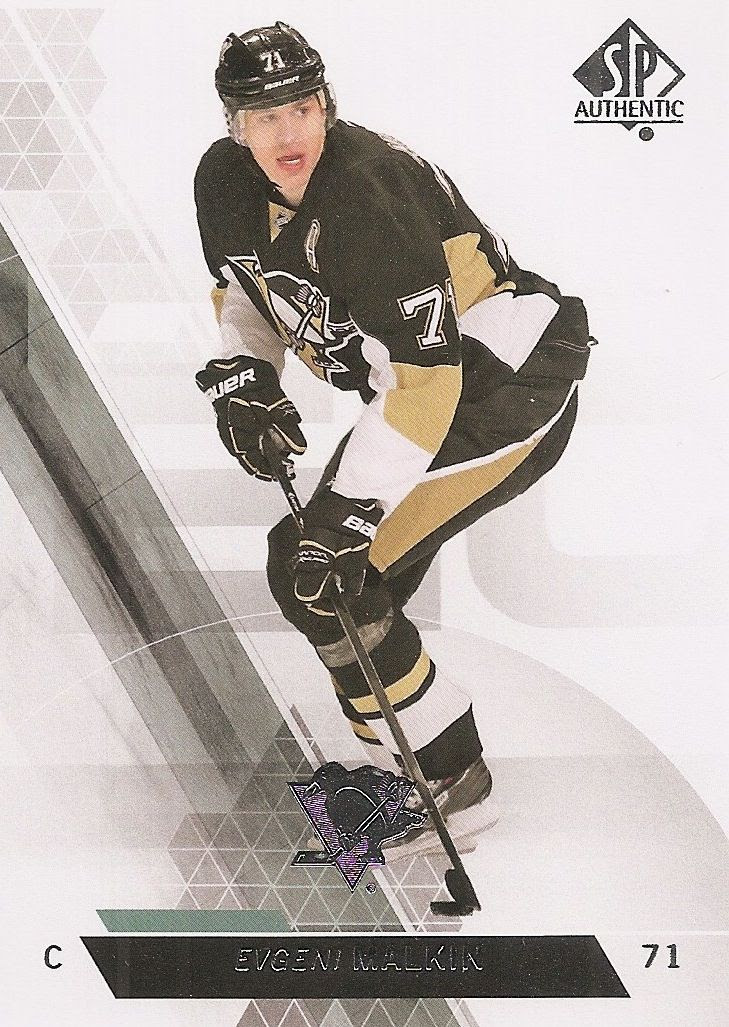 Base Card Design -
In keeping with SPA tradition, the base cards come on a primarily white background. While in the past, the SPA backgrounds have been a bit more spartan, this year's has more graphical elements. These elements give the card a sense of movement - it's very dynamic and quite modern looking. It's awesome to see these how the designers at Upper Deck tweak a product year after year to make it just a bit different than the years past yet still keep a product's feel the same. The base cards are highlighted with just enough foil so that the card is elegantly done, and not over the top. The refinement shown in SPA's design is quite amazing, and Upper Deck has once again created a base card design worthy of the SPA brand. 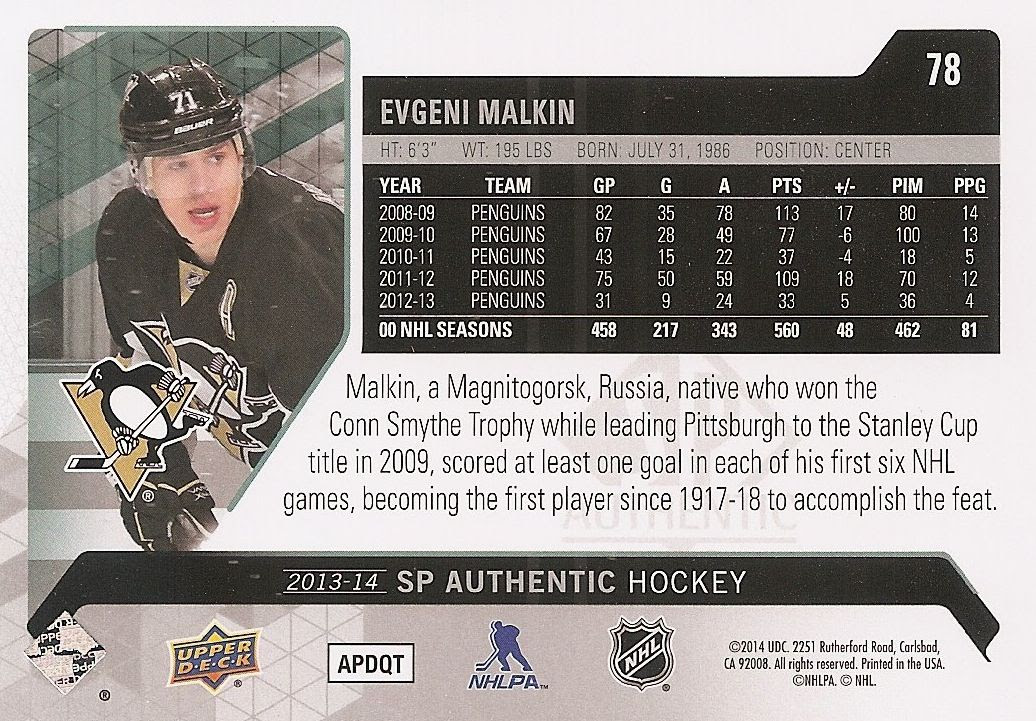 In somewhat of a surprising move, Upper Deck has gone horizontal with the card backs this year. The card back has a color photo along with the player's stats and a paragraph about the player. The card back is a bit stark and serious, but nonetheless is solidly designed. It's definitely not a 'cookie-cutter' back as some other card brands are fond of doing. It's a good look that compliments the front well, just as a card back should. 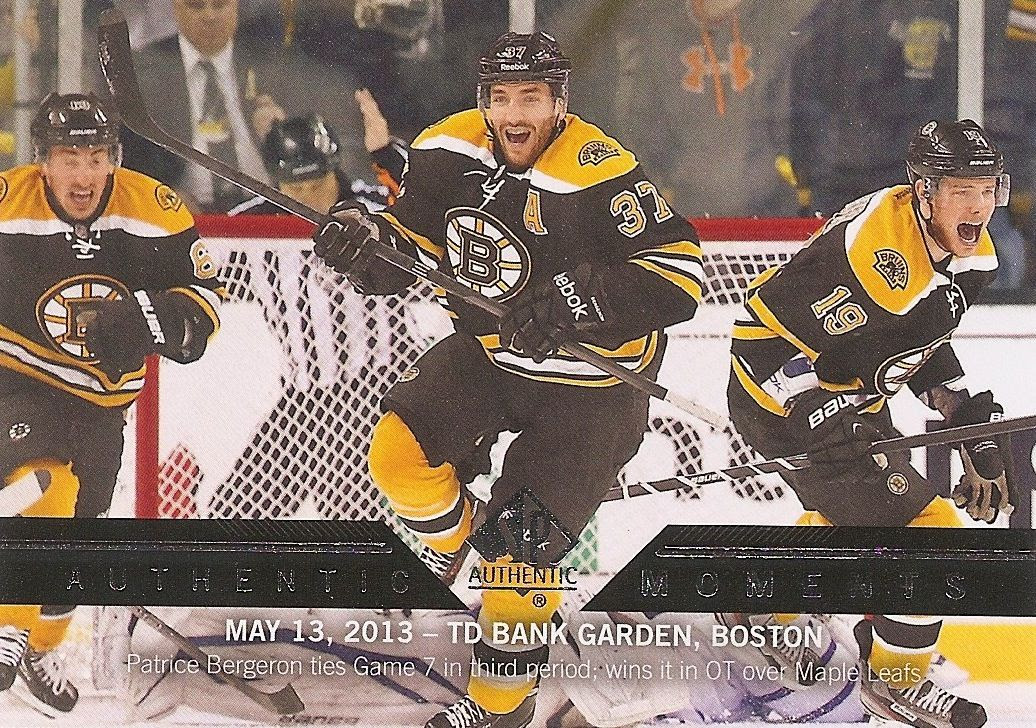 The Authentic Moments cards are back again this year to give the set a splash of color once again. These big moments in the hockey season definitely stand out with these cards. I was wondering of these cards would make it into this year set... and they did! I'm glad they are here as they represent one of those slight tweaks in the brand to keep it fresh. These have sort of replaced the serial numbered 'Essentials' set that ended a couple seasons ago. It's definitely a nice change and improvement. 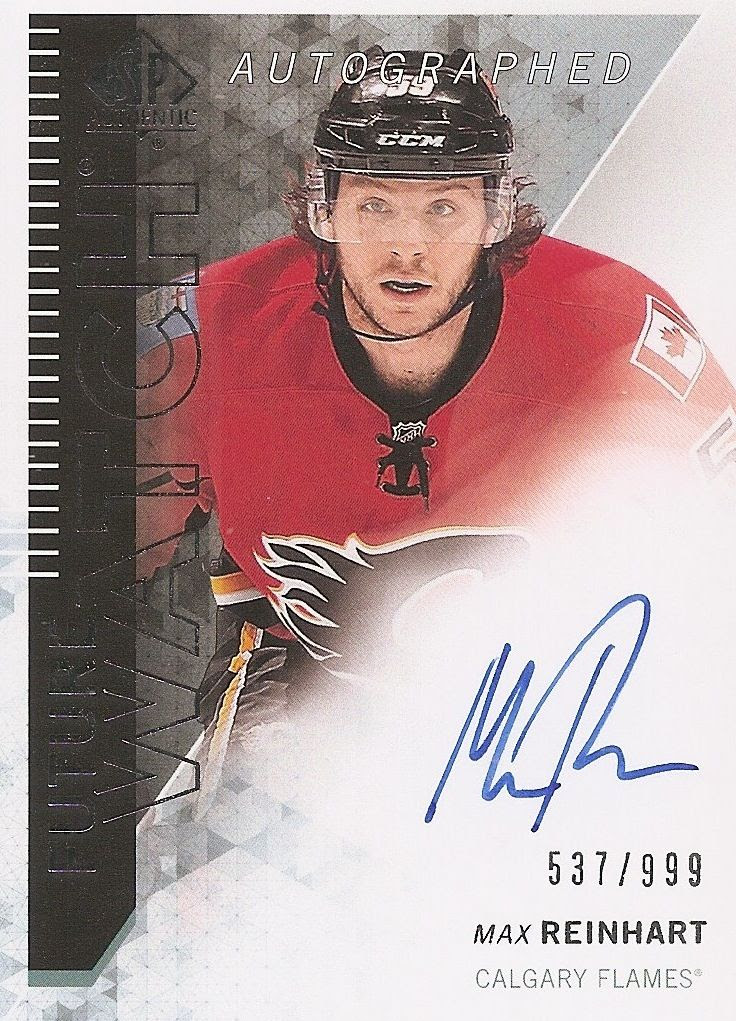 The Future Watch set is really what SP Authentic is all about. Collectors will once again on-card autographs numbered to 999. This year's version of the set looks very sharp with a design that is a departure from what they've done in the past. These cards remind me a bit of the 2009/10 Young Gun cards with the large 'Future Watch' foil graphic on the side. The font is almost futuristic in a way. The design concept is bold, and the autograph placement has been done perfectly. I like how the space for the autograph sits in a white area above the serial numbering and player name. I am a big fan of the Future Watch design this year. Non-autographed Future Watch cards are also included within the main set. Those card are serial numbered to 1299.

Inserts/Game-Used/Autos -
Boxes of SP Authentic state that collectors will find three autographs within the 20 packs that it contains with at least one being a Future Watch rookie card. Besides the hits available, collectors will find retro looking 1993 SP cards here as well. The 1993 SP set was one of my personal favorites as a kid. I'm personally very excited to see this design come back. 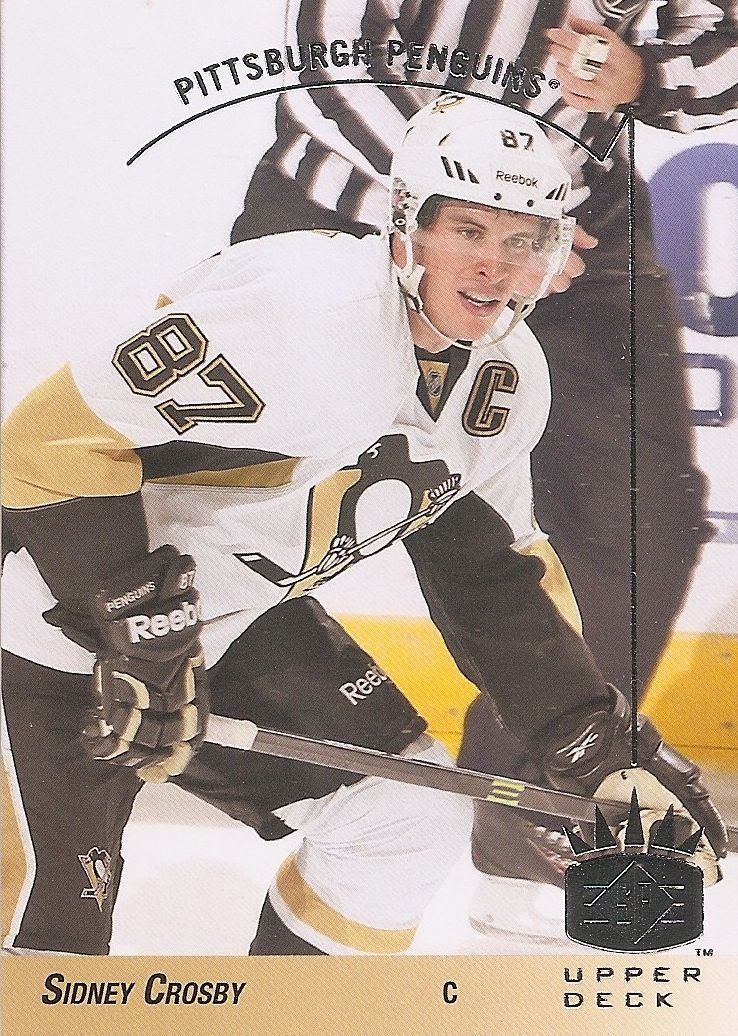 The '93 SP cards were bright and had great photography. That's what really attracted me to them when I was a kid collecting them back then. Baseball and football had their own main sets back in 1993, but if you wanted the hockey version, you had to buy standard Upper Deck packs to get them. Each Upper Deck pack came with just one SP card. It was definitely a difficult chase back then. I never was able to complete the set as a kid, but I was later able to obtain one via eBay. It's in my personal collection now. 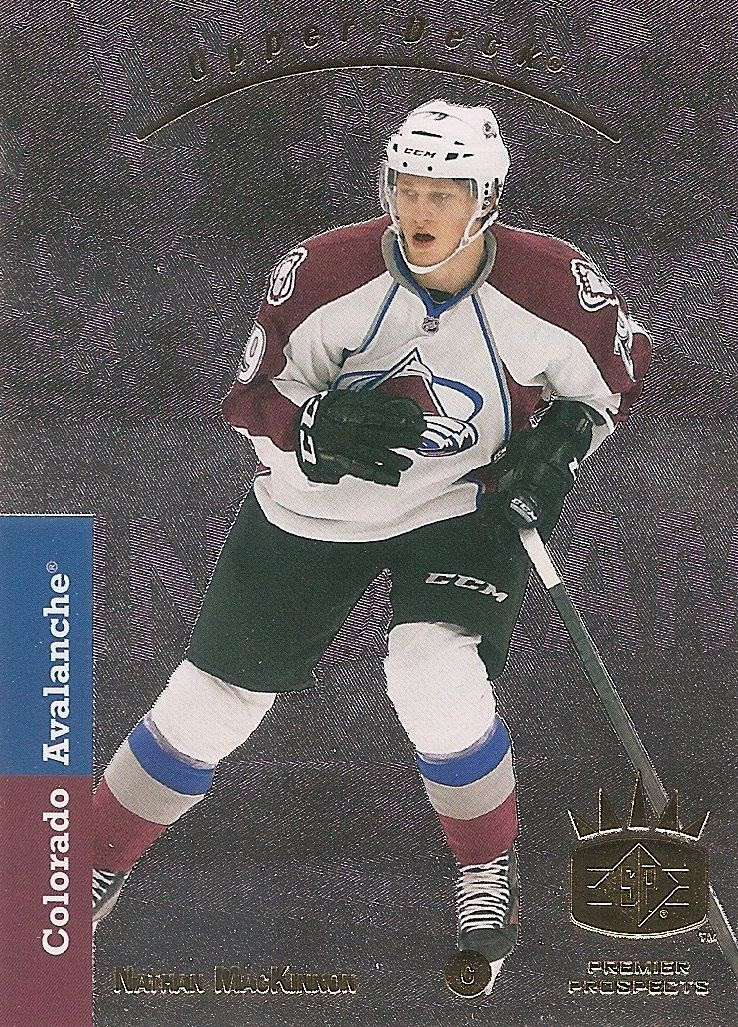 What hockey collectors didn't get back in the day with SP were the foil rookie cards. Upper Deck kind of makes up for that now by having the double rookie class in this format. The cards looks exactly like they would have back when they were released back in the early nineties. These foils cards were worth a good amount of money when they came out. That's probably not the case with these, but they are still fun! 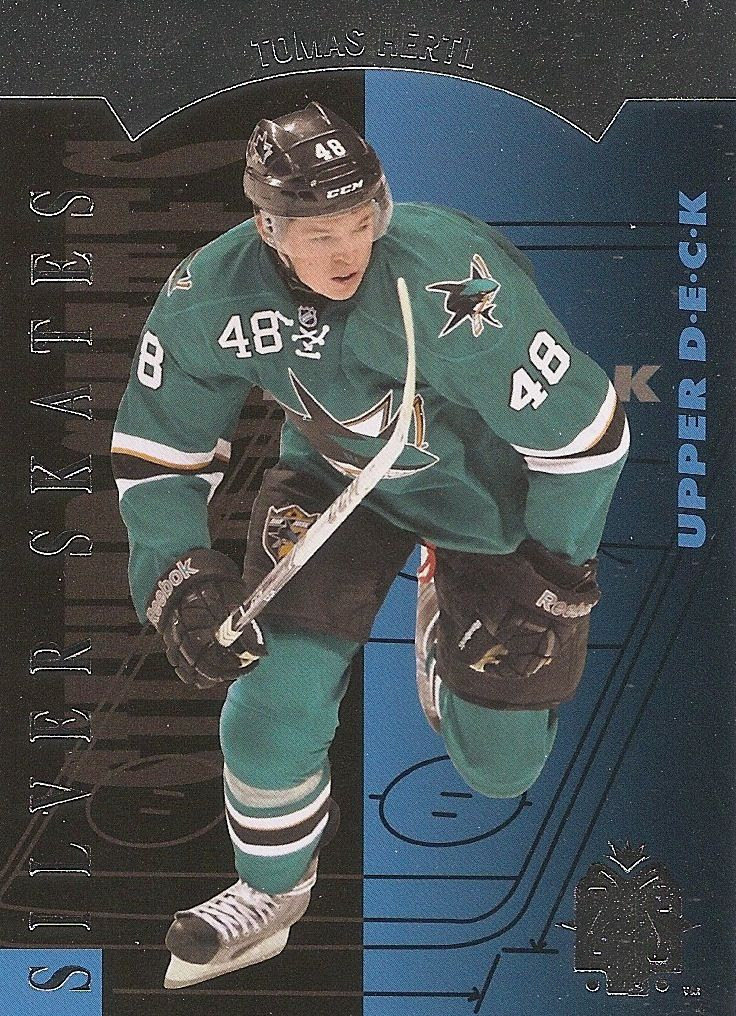 Silver Skates were very popular insert cards that featured die-cutting at the top. Upper Deck decided not to have these cards be die-cut... and they look very awkward to me. I say, if you're going to do a card that looks like what it did in the past... you need to go all the way. These cards to me are unfinished; they need a trip to the die-cutting machine! Other than that, the Silver Skates look nice. The deep colors used on the cards give the cards a strong look. Rookie Silver Skates have blue backgrounds while veterans have red. 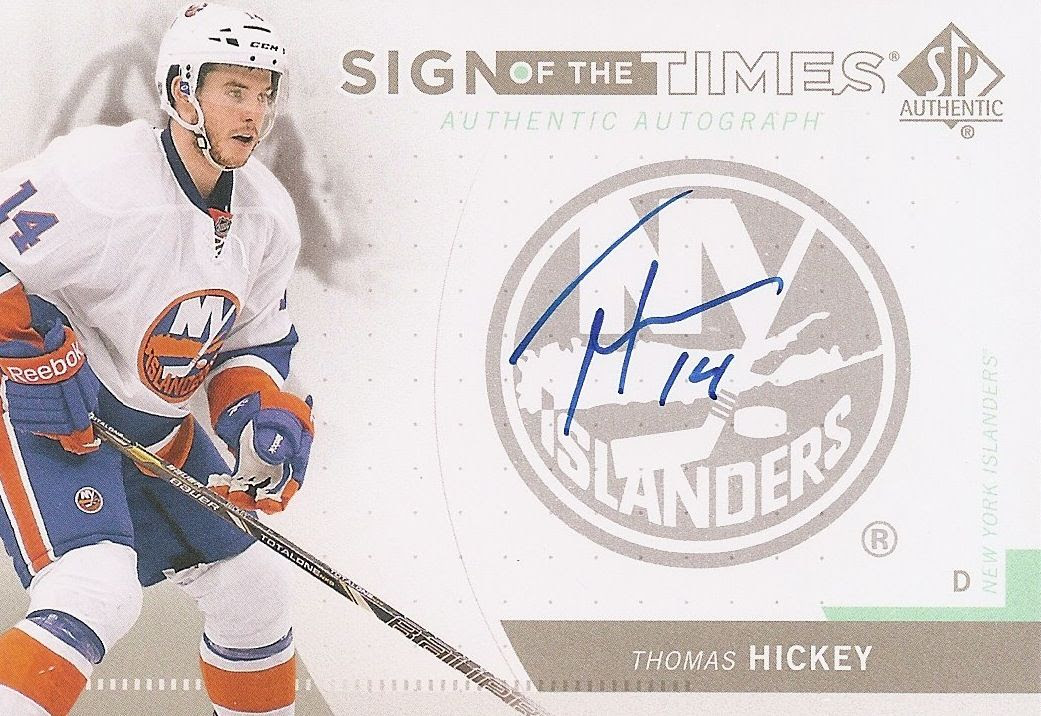 Sign of the Times is a familiar name back again with an updated and fresh design. These cards have on-card autographs. It's a good set, but often times collectors will find players that are lesser names here. The big stars in the set have very long odds of pulling them.

I was able to pull a Future Watch Patch Auto from my box, but unfortunately it was a redemption card. There are many things to find in SPA this year including cards that were left out of past SPA sets. Upper Deck has put a lot into this years offering. It'll be fun to see what collectors pull out of their boxes.

Overall Rating -
It's hard not to recommend Upper Deck SPA. Every year it's a solid product for about $100/box. Collectors know that the Future Watch Autos and Patches are what to look for when buying this product. Future Watch cards along with Young Guns (lower-end) and Cup Rookies (higher-end) are the most popular rookie cards to get.

That being said, it can be difficult at times to pull out great cards from a random box or two of SPA. Many times I've seen boxes with a couple low-end Future Watch cards and a Sign of the Times card. But that stuff's going to happen. I think it's worth the risk to try a box or two of SPA. It's one of the most solid choices you can make as a hockey card collector season after season.


Check out my box of SPA from D&P Sports Cards in Sacramento, Ca: