Panini has really been hitting the Prizm-bandwagon hard these past few years. It seems like I just reviewed a Prizm baseball product not too long ago, but here we are again with yet another new Prizm offering. The cards continue to use the a similar etched foil look, and again this Prizm features plenty of parallel cards to chase down. I'll be interested to see how the product has changed since the last I saw it. 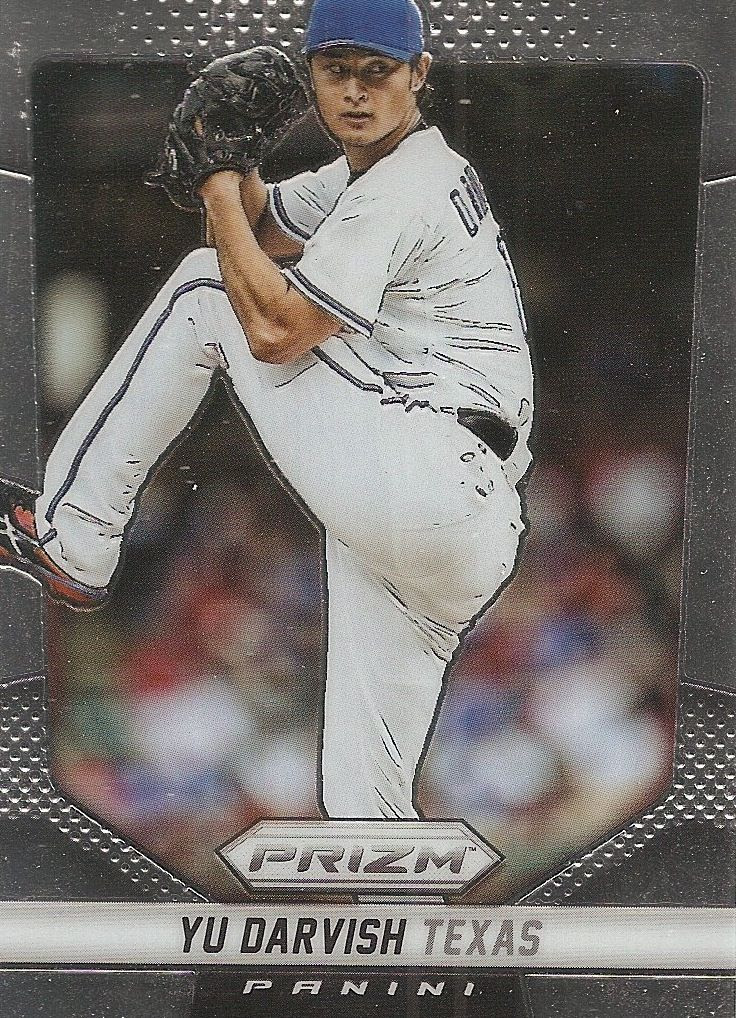 Base Card Design -
The standard 2014 Prizm Baseball design has undergone a few tweaks since last year, but it is still undeniably Panini Prizm. I have often said that these a foil/chrome type cards will always have a difficult time really looking different from each other because the thick metallic look makes everything look kind of the same - especially with this silver metal look. That being said, the base cards are nice looking and have a sweet slick sheen to them. The etching on the card gives the card a nice texture to offset the mostly smooth look on the card. The only distracting thing on the card is what's missing - and that's the official team logos. It's just strange seeing blank hats and uniforms. I credit Panini for choosing photos that do their best to hide this and not make it an issue, but it's just too hard not to notice. 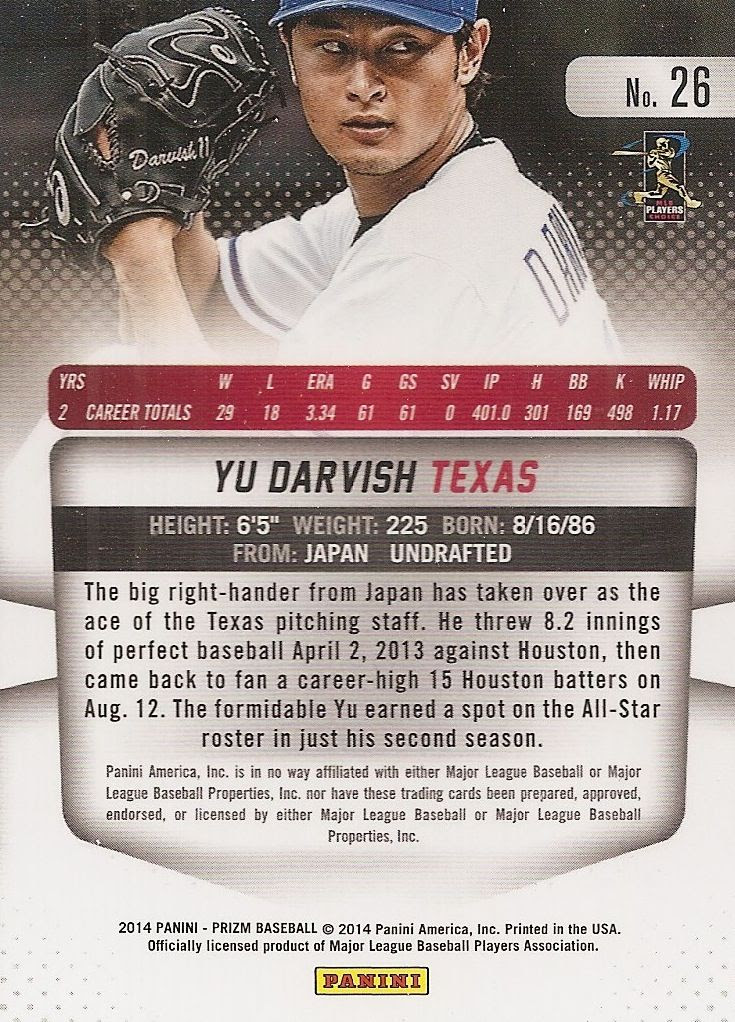 The Prizm backs have a great appeal to me. I really like the photo used for the top portion of the card. It was a great design choice to have it sort of fade as it went down towards the relevant stats. The photo gives the feeling that it continues down towards the bottom end of the card - it just feels larger than it actually is. There aren't too many stats to look at on the card, but that's pretty standard for Prizm. The good thing is there is plenty to read about the player as Panini has provided a good amount of space for a player write-up. I've got to give Panini credit for these card backs, they have been well done. 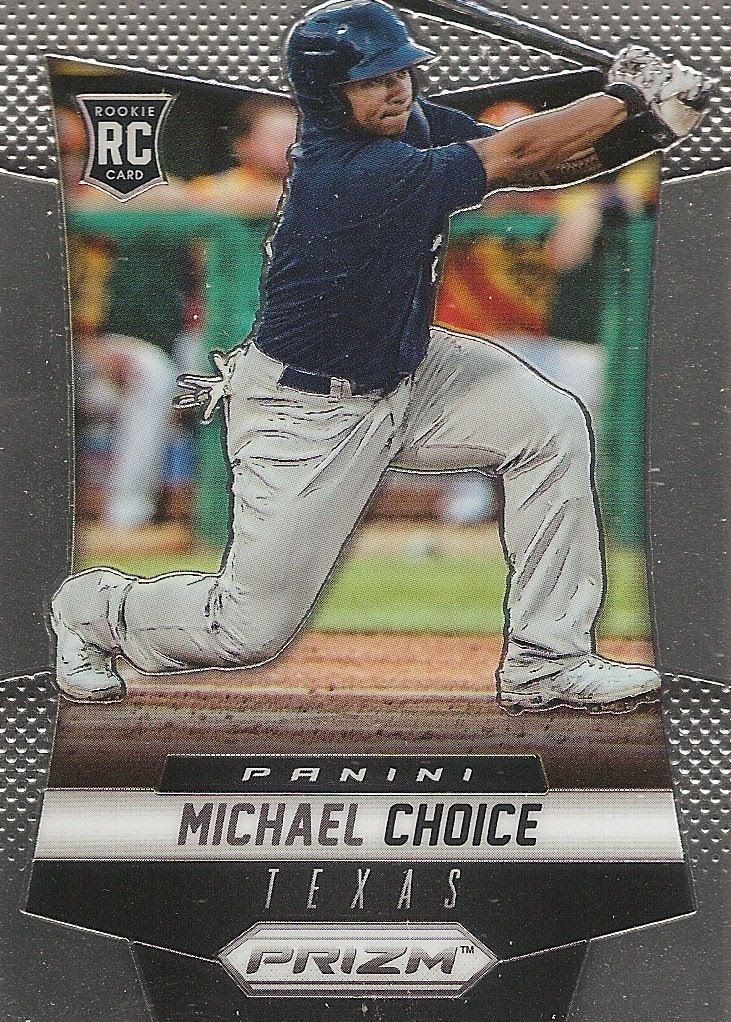 The Prizm rookie cards have a different design than the standard base, but the overall feel of the set stays the same. Panini has elected to use more of the bottom portion of the card to add in the team the player plays for separate from the player's name. It's an odd choice for me because by doing this, the player photo gets scrunched down a bit. I wouldn't have noticed this if every card was like this, but it's very apparent wen putting these rookie cards side-by-side with the other base cards.

Inserts/Game-Used/Autos -
Panini really condensed Prizm this year. Instead of giving collectors 20 packs, there are now only 12 in a box. Less packs doesn't mean less stuff though! There are still two autographs per box with even more Prizms than last year. So all-in-all, a very good thing for Prizm collectors out there - there is more to find in fewer packs. That's definitely a winning scenario for collectos. 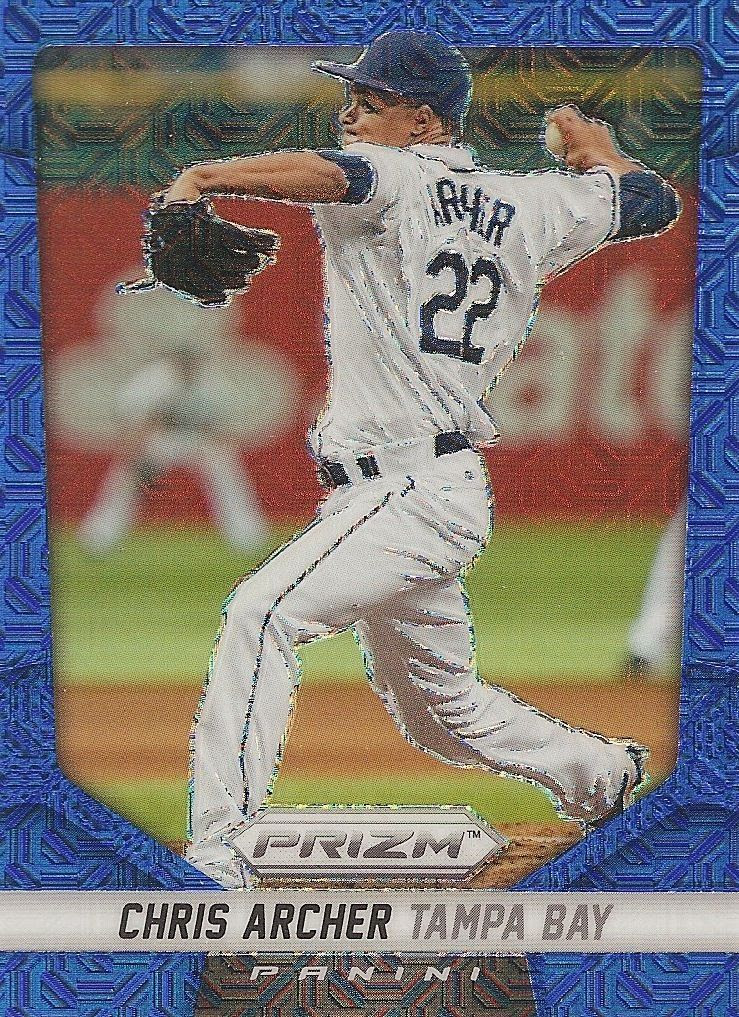 Collectors will find more Prizm parallel cards like the Chris Archer Blue Mojo version shown above in their boxes of Prizm than they did last year. Panini upped the Prizm insert count considerably - they state on the box that there are six per. Each Prizm variant has a different numbering. The Archer is serial numbered to 75. The Gold Prizms numbered to 10 are usually some of the most popular versions of these cards. They are very low numbered, but not impossible to get a hold of. Finite 1/1 Prizms are great as well and also have good value to them, but can often be less popular due to the virtual impossibility of collecting them all. 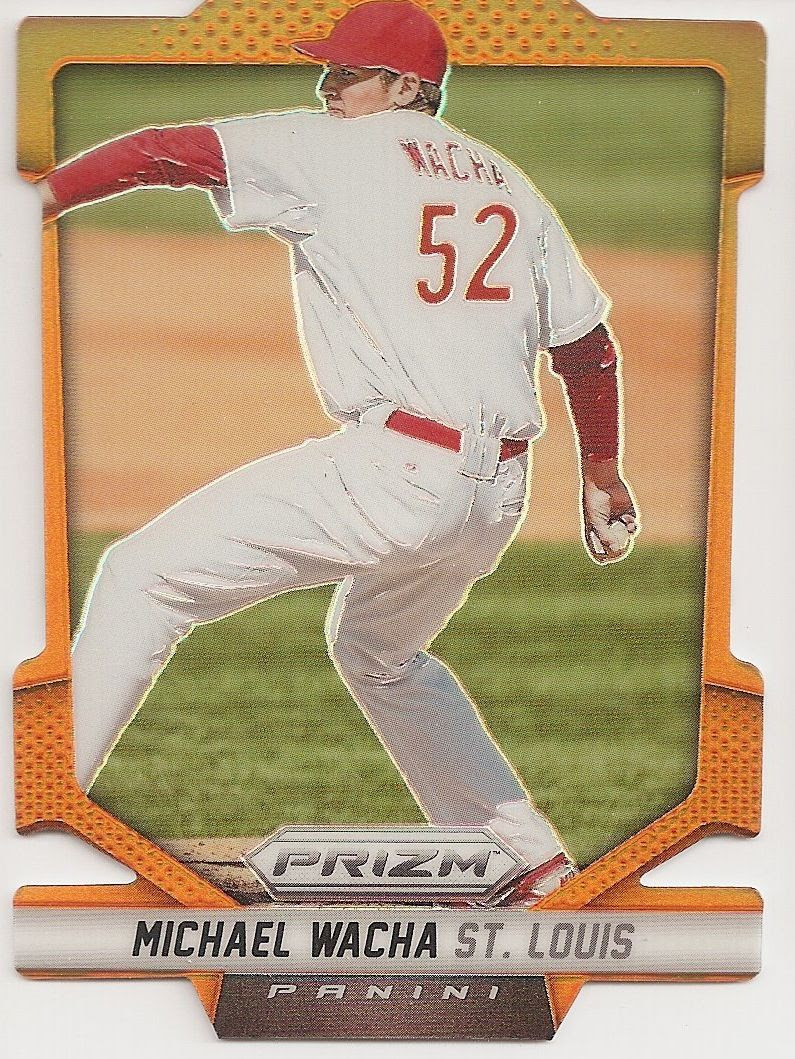 One of my favorite Prizm parallels have been the Orange Die-cuts. It looks as if Panini is starting a tradition with this color! The 2014 Orange Die-Cuts are serial numbered to 60 and feature a very modern and industrial looking cut from the card. These cards would have a great appeal to those who are looking for something unique but also easier to collect than some of the really low numbered cards. Using die-cutting with the parallel system is a great idea, and I hope Panini keeps this going in their Orange Prizm cards for a very long time. 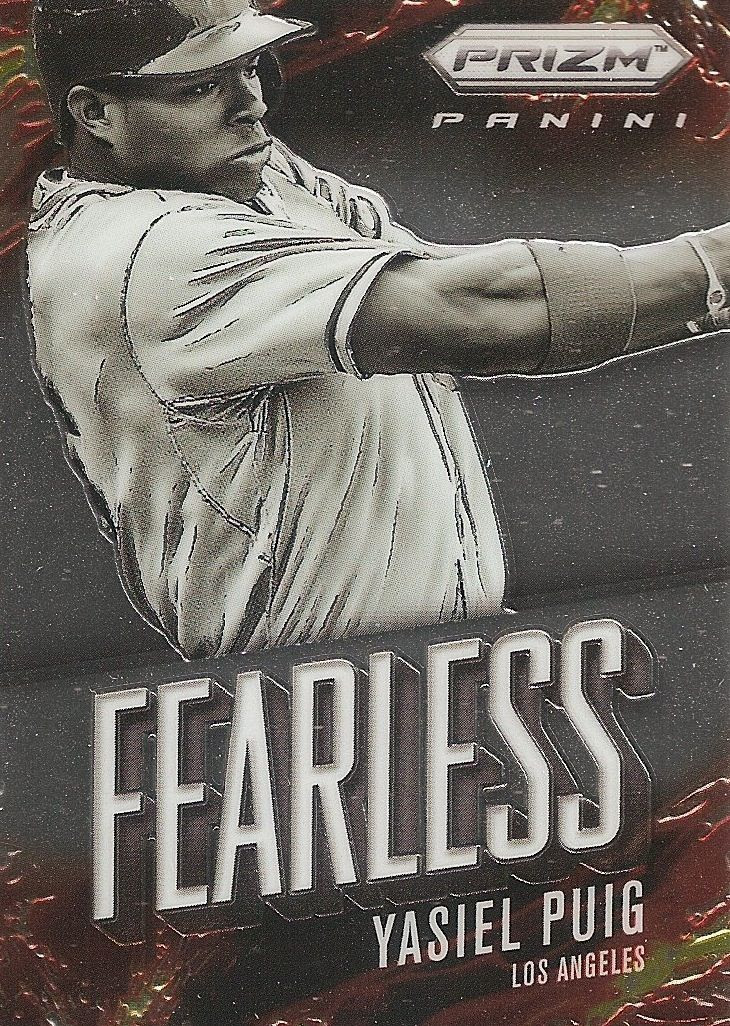 Standard insert cards are pretty prevalent in 2014 Prizm Baseball. These inserts have the same thickness and feel of the base cards, but have unique designs that convey different themes. These inserts cards are great for younger players who want to add more cards of their favorite players in an affordable way. For more seasoned collectors, these sets also have undergone the parallel treatment and have hard and harder-to-find versions of themselves. 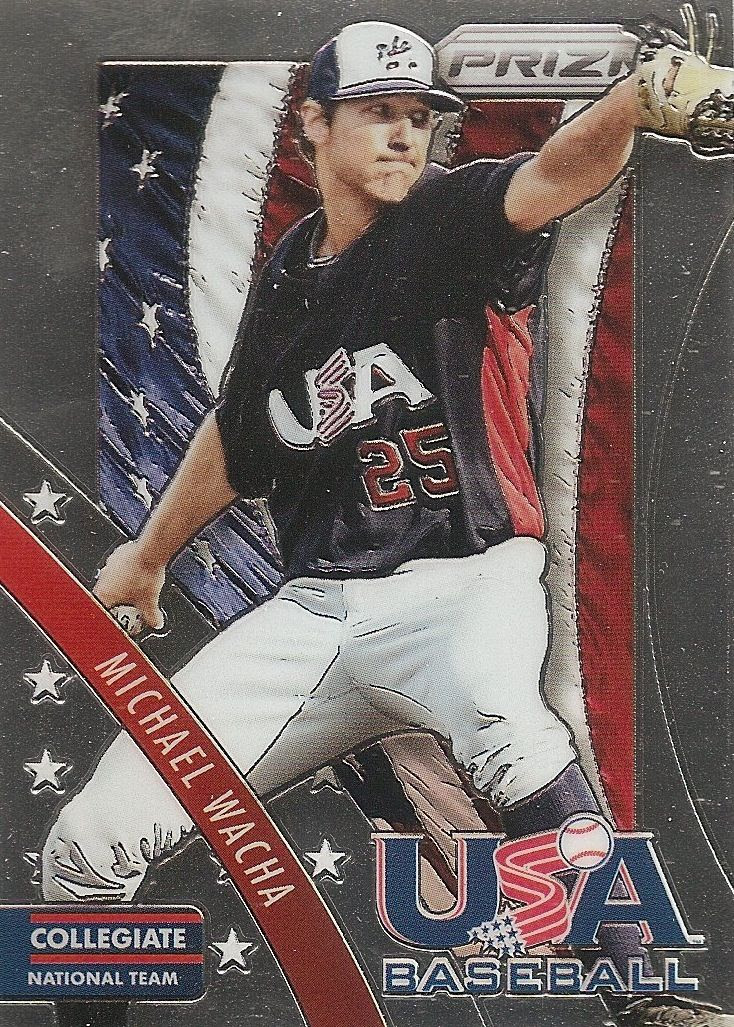 One of the few places you will find a non-Panini logo on the cards are with these USA Baseball inserts. Panini has wisely chosen to include USA Baseball themed cards in their products. These cards look great as they don't have any hindrance to them. You can see how great these cards would look with nothing held back. 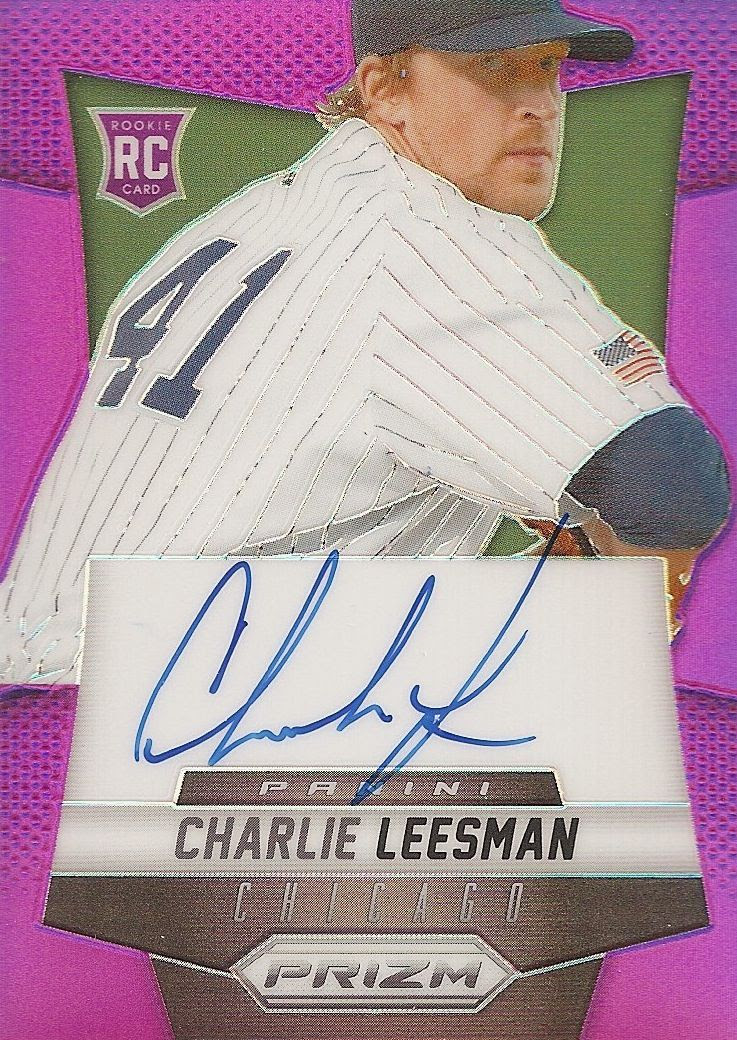 The box states that it will contain 2 autographed cards. Sadly, I only found one when I opened up this box of Prizm Baseball. Panini is usually very good at rectifying situations like this, but it's still disappointing to not get what is expected and stated on the front of the box. That being said, I do like the autograph that I pulled here. The Purple Prizm looks really nice, and the on-card autograph really pops.

Prizm has a great deal more inserts and autographs to find in it than what I have shown in this post. Check out my video below to see some of the other inserts that can be found! In terms of autographs, Prizm has a wide-range of players. Collectors can expect to find the newest and youngest stars all the way to retired legends.

Overall Rating -
The new 2014 Panini Prizm Baseball is a very strong effort from Panini. They have really distilled the product down quite a bit from the past. I love the fact that boxes contain less packs but have more inserts in them. It's definitely a good value as boxes can be had for around $60 or so.

Collectors who have enjoyed Prizm in the past will definitely like it again here. It's a brand that Panini seems to be very invested in year in and year out. Collecting Prizm is affordable, and there is potential in the product for some really valuable and rare cards - like the Gold and Finite Prizms.

I would recommend this product to fans of baseball. Though there aren't official team logos or names, the cards are of high quality and are well-made. I believe Panini has once again done the most of what they could with the limitations set forth on them without the MLB license.


Check out my box of 2014 Panini Prizm Baseball: