Upper Deck SPx was released this week, and it comes to hockey collectors with a bit of a design make-over. While it is a make-over of sorts, I have to say that it's more a return to its roots. This year's SPx is livelier and more exciting in terms of its look. SPx had toned it down from its frenetic beginnings in recent years, but it looks like Upper Deck wants to inject some pizzaz back into the brand. This new look gives SPx a fresh re-boot that collectors should enjoy. 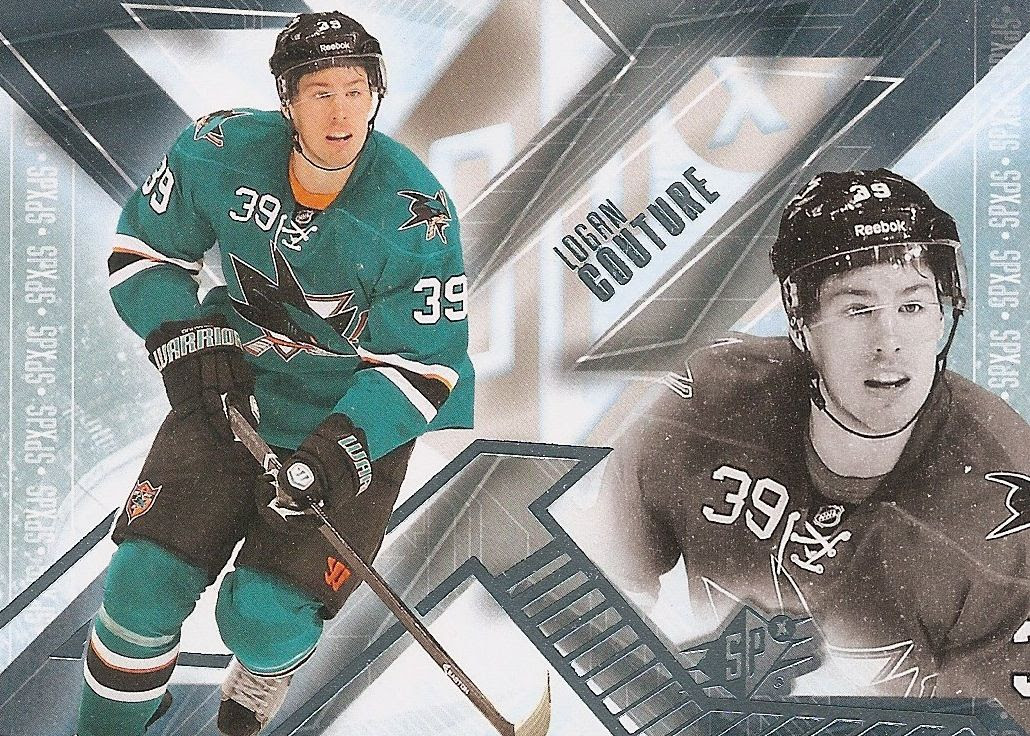 Base Card Design -
As I mentioned, SPx had been getting more and more 'refined' in its past few releases. The tones of the card had gotten darker, and the emphasis on the overall feel of SPx was more mature. Well... THAT'S NOT HAPPENING THIS YEAR!!! Upper Deck has reached back into their original ideas for SPx and have made it to be a more dynamic and exciting looking set. This year's base card design is very busy with foil all over the place and graphics strewn about it... but it looks very good to me. The card is fun, with great looking 'hockey colors' and SPx-y design elements. My favorite part of this card besides the color tones has to be the 'X' motif in the middle of the card. SPx had been a brand to celebrate itself quite a bit, and it does so here. If there was a 'rude boy' in the family, SPx would be it for the SP family of brands. I'm very happy to see SPx unleashed again this year from a design standpoint. 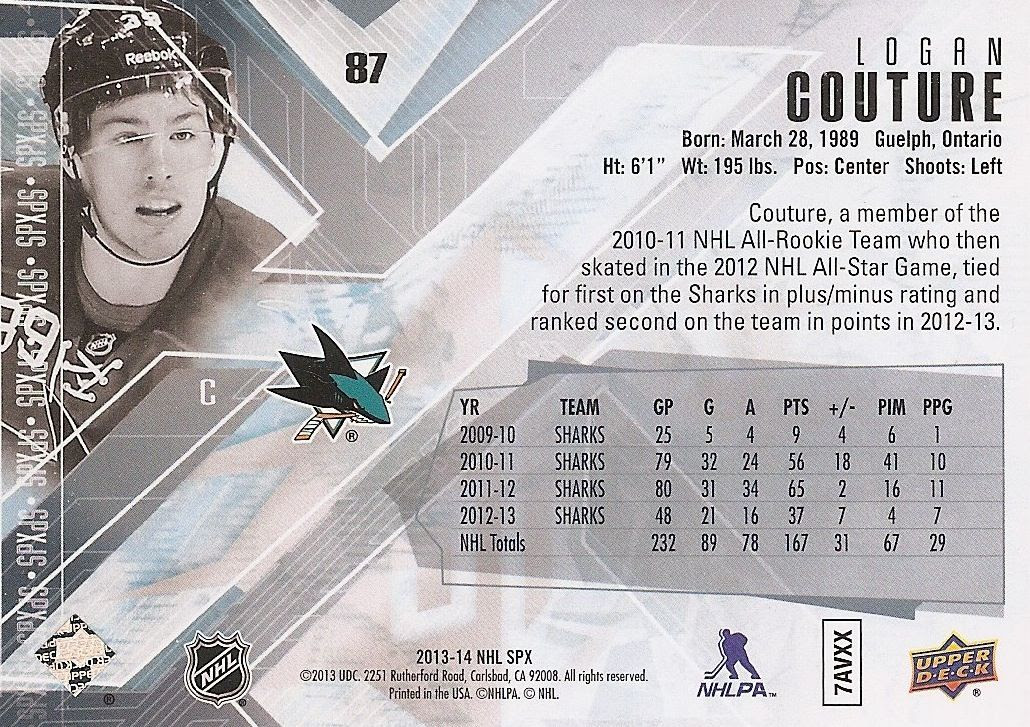 The back of the SPx base card continues with the artistic style of the front. Everything carries over very well - the color scheme, graphical elements, and feel. Collectors will get stats, vitals, and a short write-up of the featured player. Again, Upper Deck has shown how backs should be done. The designers at UD certainly don't doze off when it comes to creating the complete card. 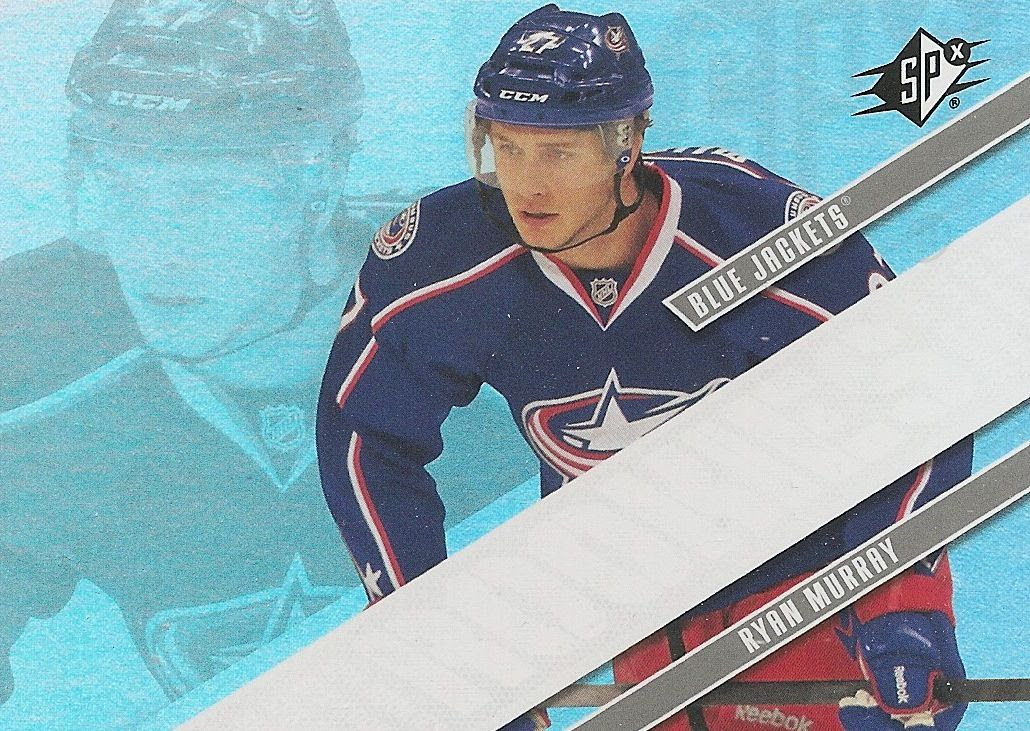 There are two sets of rookie cards in the main SPx set. The first type are these foil rookies. They are numbered from 101-160. The cards feature a full-color photo of the player with a foiled version of the photo to the side. These cards have a washed out look to me that just doesn't do it. In bright light, the foiled photo is hard to see, so the entire card looks like a big white space. And the huge 'Rookies' banner is done in such a light non-contrasting way that it looks like a part of the card was un-finished or missing. A couple of things could have made these cards great. If Upper Deck had made the background a hologram (to harken back to the old school SPx card) instead of just holofoil, the card would have been much better. And darkening the word 'Rookies' to anything other than what they did would have also been a great help to the look of these cards. These particular rookie cards come in two tiered levels. The easier of the two come one in every 2.5 packs whereas the rarer version come one in every 10 packs. The Ryan Murray above is one of the rarer rookies. Rare rookies are numbered 141-160. 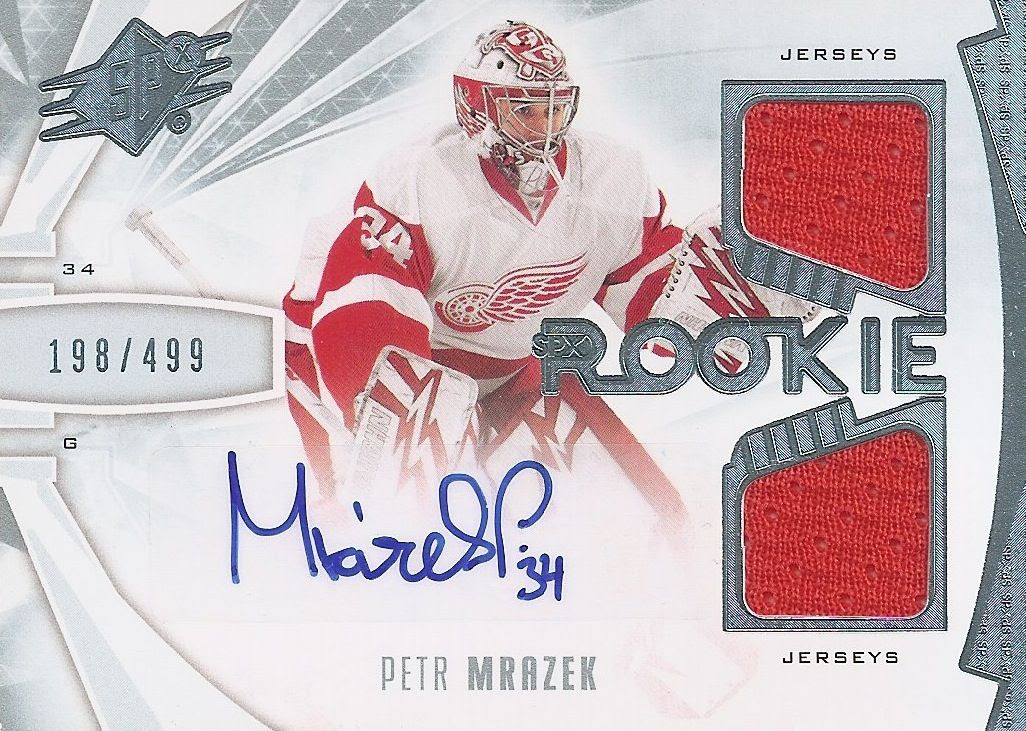 Returning to SPx are the popular jersey auto rookie cards. This year's version look stunning. They lose a bit of the frenetic-ness of the base, but gain a huge amount of clean-cut elegance. The rookie jersey autos look like they could be from a much higher-end set. The white background and the baby blue foil are just perfectly paired for a hockey card, and in the case of this Petr Mrazek above, the red stands out well as a contrasting color. These cards come numbered to either 249 or 499. Patch variations numbered to 30 are available with many including inscriptions with the signatures.

Inserts/Game-Used/Autos -
Each box of SPx should yield collectors 4 hits. In the two boxes that I have seen opened personally, one box contained just one autograph while the other had two. Collectors will find Ice bonus packs in boxes of SPx like they did last year. I'm sure the Ice Premier rookie cards will be popular once again - especially the difficult to find ones that are limited to just 99. 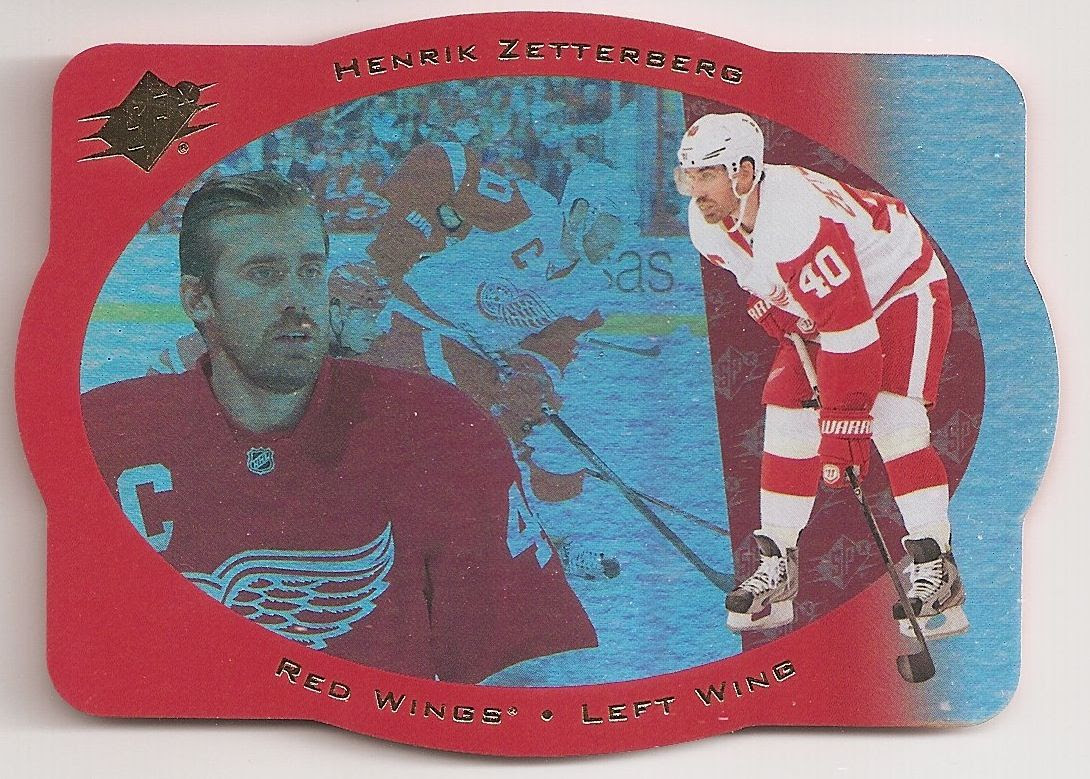 An interesting insert in this year's SPx are these die-cut 96/97 Throwback cards. Many younger collectors may not remember them, but these cards were very cool back in the day, and I remember buying my fair share of these. While the original cards were pretty awesome, these cards are just 'ok'. In fact, these cards are just a shell of the what the originals were. The originals were thick cards with a hologram in the middle. When you turned one of the original cards, you would see the player turn and sometimes smile or wink at you. That was awesome! The cards found in 13/14 SPx are very thin and do not have any sort of holographic technology. It's just foil. If you've never seen an original, these cards are fine, but they just don't do it for those who remember what these were back in the day. Collectors will find veterans, rookies, and autographed versions of these cards. 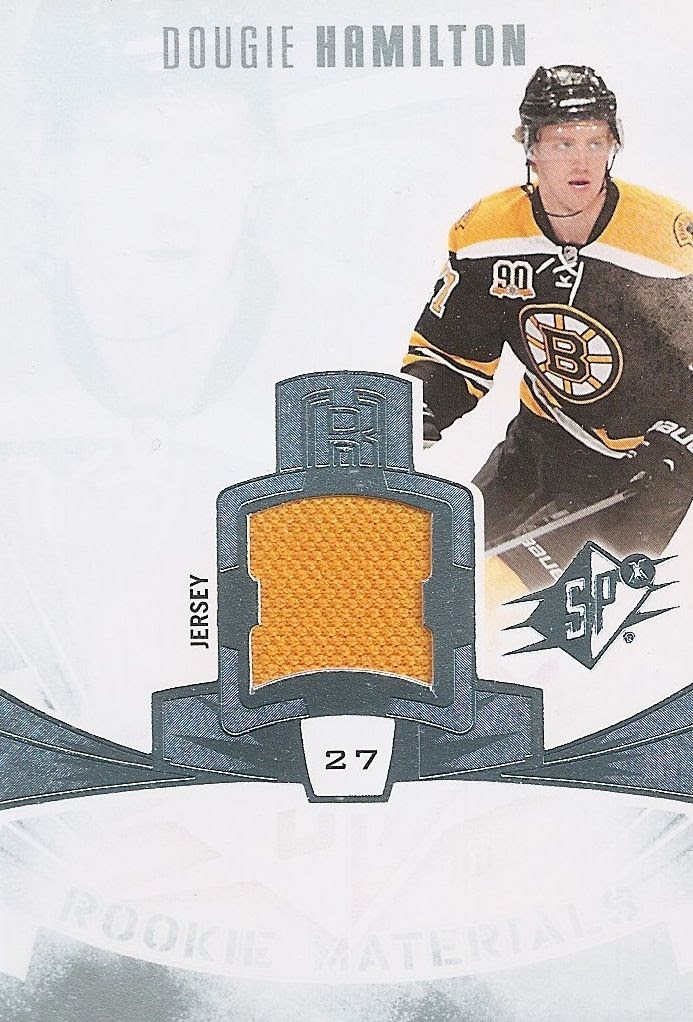 Rookie Materials cards return this year with an updated look. The cards have the same sort of look as the rookie jersey autographed cards in the main set. The color scheme and design elements are the same. While there is a bunch of 'white' space on these cards, I do enjoy them still very much. These cards feature a very small swatch of jersey and not much else, so I'm not sure if these cards will be too popular. They may be just another card to add for those who collect specific players. Patch versions exist as well as combo variations. 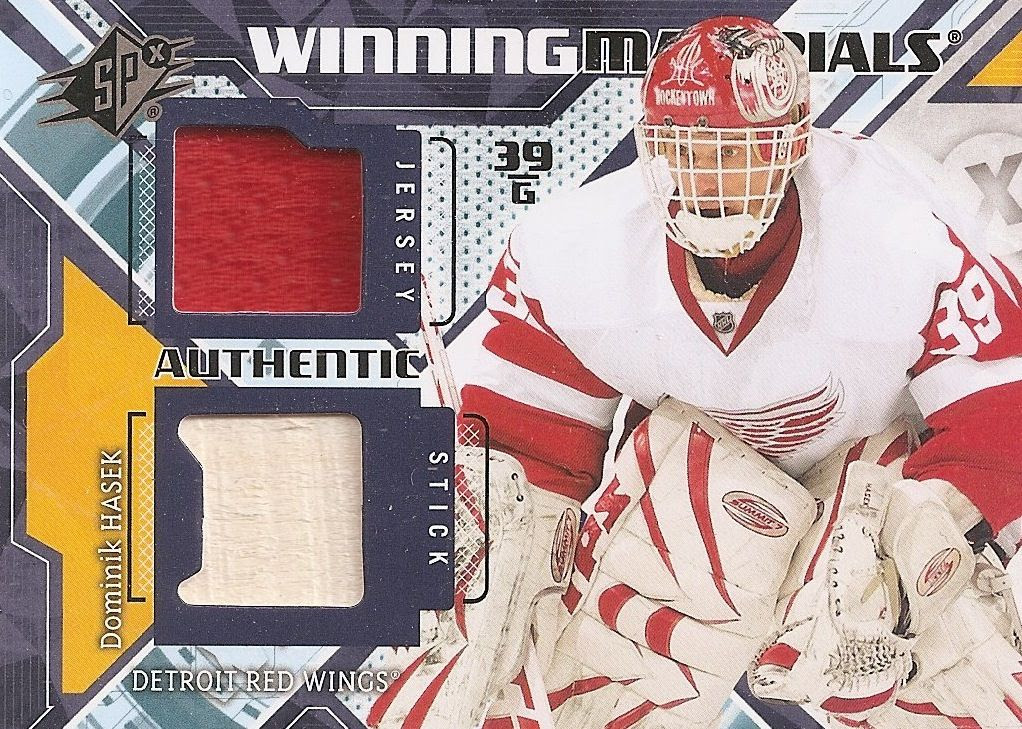 Winning Materials is also a set returning to SPx this year. While the Rookie Materials went more elegant and refined, these cards went towards the crazy-end! Like the standard base cards, these Winning Combo cards have a busy energized look to them. The Hasek card above features a jersey and a stick piece. Because of the stick, this card is very thick. 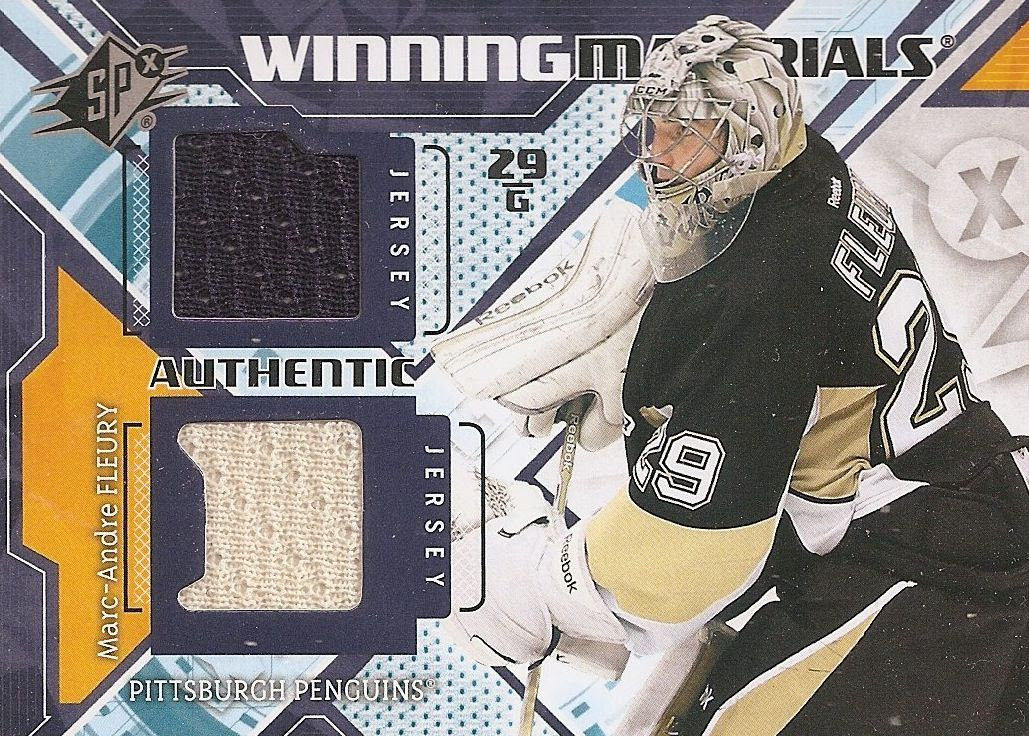 The Marc-Andre Fleruy card above is in the same vein as the Hasek one I pulled. You can't tell from the can, but the card is much thinner than the Hasek. The Fleury only has two jersey pieces imbedded within it. Patch variations of these cards are more limited.

SPx has much more to offer than what I pulled. The Shadow Box cards have returned (this time with Logan Couture, which I need to chase down) as well as some very cool buy-back autographs. Collectors will also find updated Trilogy cards within SPx as well. Some of the bigger name rookies left out of Trilogy are here.

Overall Rating -
SPx is definitely a solid product agin this year. Collectors know what to expect from it, and from a hit standpoint, it's pretty much the same. Collectors can enjoy collecting the rookie auto jerseys as well as the patch variations of those cards. I was very glad to see SPx coming back with some exciting designs. That alone I think makes SPx a better product than it was last year.

I would recommend SPx to anyone looking to buy a solid product for a little over $100 per box. It is a well-known brand that people trust. The card prices tend to hold their values well, as is the case for most Upper Deck brands.