It was about to be another Target Excell re-pack this week, but I didn't want to do four of those in a row. My Target actually re-stocked them this week, but sadly, none of them had Trilogy in the window. All the new Excell re-packs had 2 packs of OPC on both sides. That's not a real incentive to buy them. One of them was very fat and bloated though... it caught my eye and curiosity. I may have to pick that one up one of these days.

This blaster of Upper Deck was more than twice the price of the last three boxes of re-packs. Obviously it's a newer product with more packs... but somehow I don't feel that the price justifies the content. But that's how much blasters have always been, so it is what it is. My recent blasters of UD1 have been very similar in nature. A lot of the packs this year seem to be only base cards. I expect the same form this box today.

As most of you know already, UD1 blasters are a vehicle to find Young Guns. You are pretty much guaranteed to get two per box. Often times the Young Gun card is a better pull than a plain jersey card. This year I have yet to pull any big named rookies out of UD. I'm sure if I keep cracking it, a Hertl or MacKinnon will come out one day.

Will that day be today? Let's open up this blaster box of UD1:

Review -
So this box wasn't the best box ever. But it was nice to get over the amount of expected Young Gun cards. That's something I definitely can't complain about. You'll see the three Young Guns I pulled later on.

As I expected, the blaster was pretty base card heavy. After pulling the first Young Gun in the first pack, I came across a slew of base card only packs. I gotta say that opening up a bunch of base card packs is not fun. But for new collectors, it'd be ok as at least the Upper Deck base cards are pretty to look at.

My insert cards were pretty middling. A couple of MVP base, a canvas card of James Neal, and a Decades 1980's card do little to raise the excitement level.

Surprise, surprise! The top three cards today are all the Young Guns I pulled: 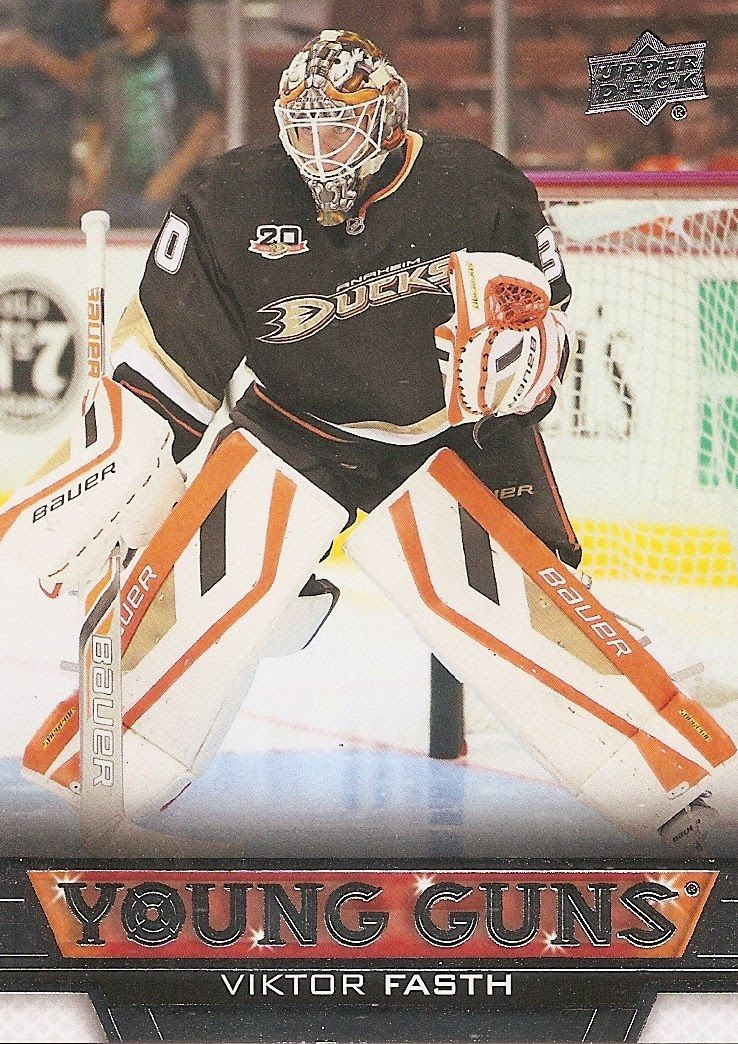 #1 (tie) - Viktor Fasth Card No. 244
So, I really couldn't put one Young Gun over another in this break, so they all ended up in a tie. Fasth is in the three hole simply because he is a Duck, and he had some fantastic games against the Sharks. I'm mad at him for that so he's here. 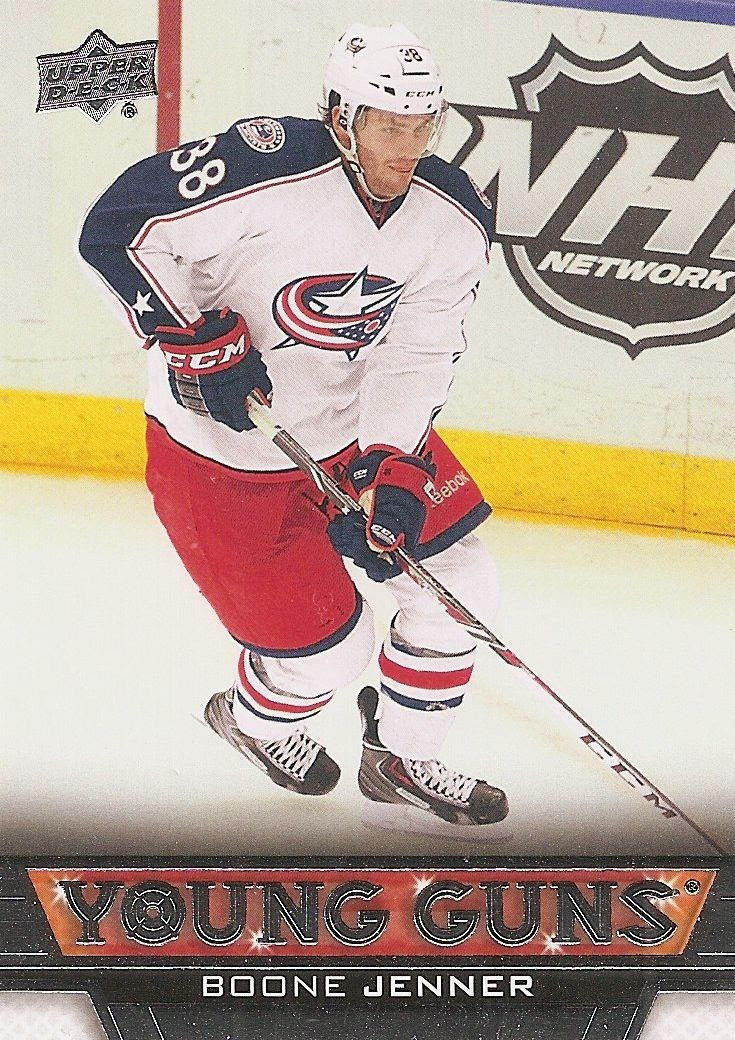 #1 (tie) - Boone Jenner Card No. 225
I have to admit that I don't know a whole lot about Boone Jenner. The only thing I really do know is that his first name, Boone, is pretty cool. It's unfortunate that he plays for Columbus though... that is not a team that has garnered a lot of collector interest. 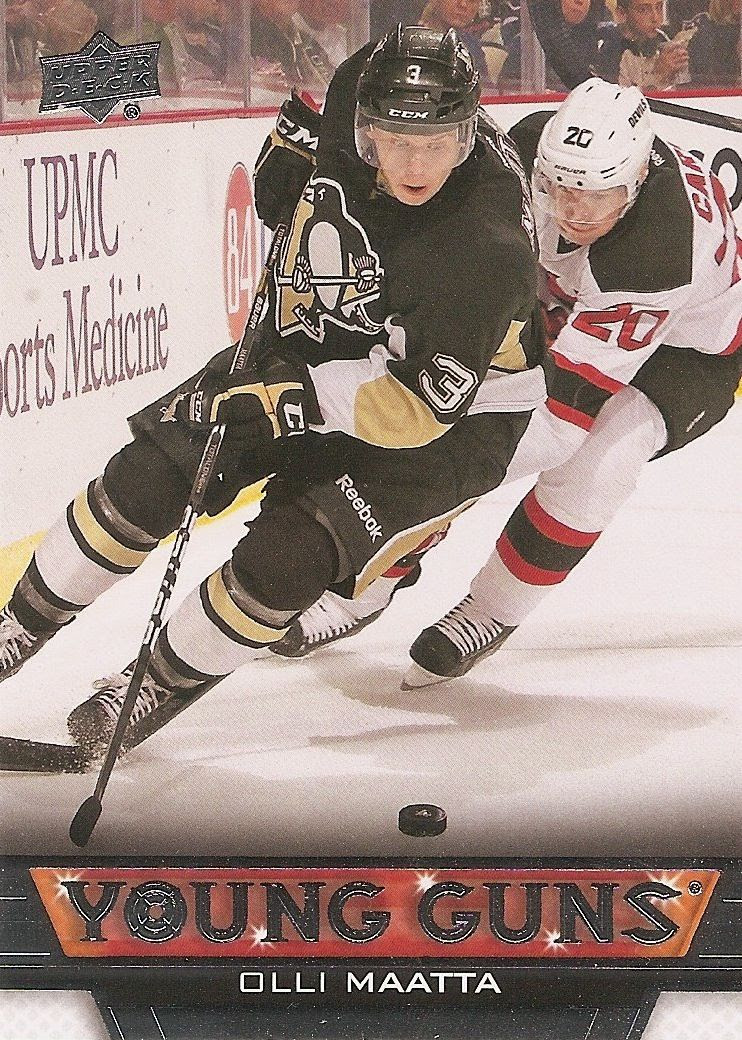 #1 (tie) - Olli Maatta Card No. 220
Olli Maatta finds himself in the one hole because I do like the Pens a little, and I saw that he had a nice goal very recently against the Islanders. Checking his cards on eBay, they don't sell for high amounts, but there is at least activity on his cardboard with active bidders going for his stuff!

Overall Value -
The saving grace of this box was that I got three Young Guns. So far I still haven't gotten a Young Gun that has really excited me though. I feel like I'm pulling the same ones over and over again. Hopefully one of the three Young Guns I pulled in this blaster will rise up and make a good name for himself in the NHL.

If I had a choice, I think I would actually go for the Excell re-pack. For the price and flat out zany fun you can have from one of those, I would go that route. When these 13/14 UD1 blasters take a price drop... that's when I think I would find these to be a better deal.

Look for a new episode of Retail Review every Sunday!
Posted by luke. at 6:33 AM