Upper Deck released its popular SP Game-Used product last week, and I was able to get a box then. Due to a pretty hectic schedule, I wasn't able to get this review out until now... sorry! But I'm glad to have it ready for you to read at this point! Long time collectors know that SP Game-Used is a product that underwent some major changes last year. This year's release continues on what Upper Deck did with the venerable brand in 2012. Let's take a look at what SPGU has to offer us this time around. 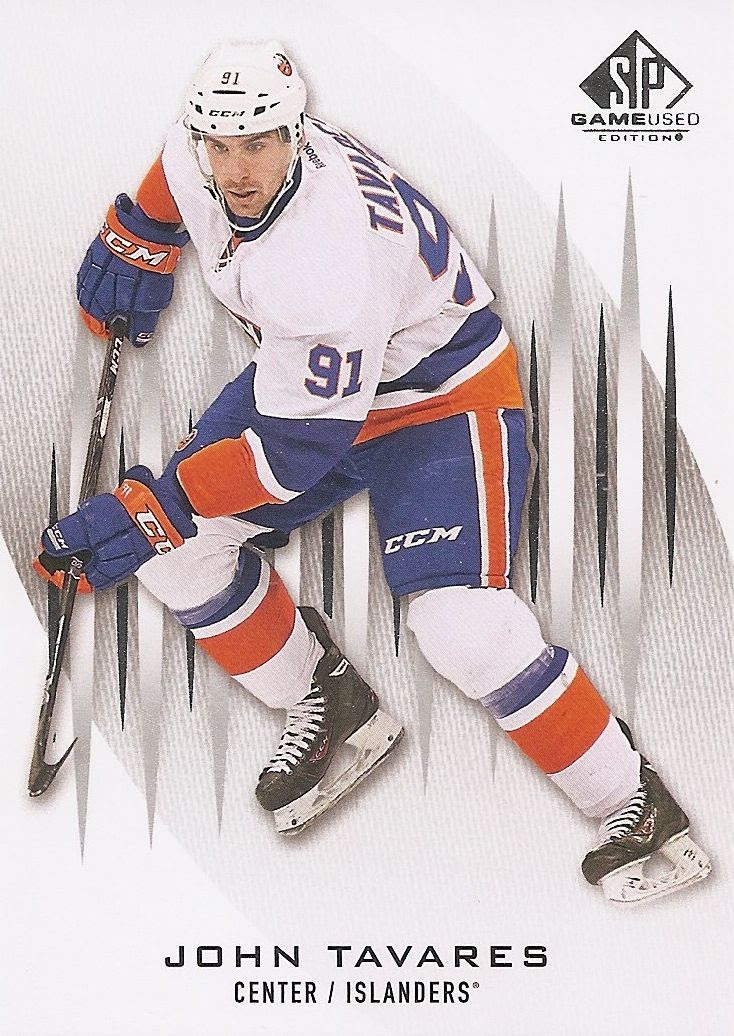 Base Card Design -
I've mentioned this before some time ago, but the SP Game-Used base cards and cards of the SP-line are generally unremarkable. They certainly aren't bad looking cards, in fact, I think the base cards this year are pretty sharp looking. But their similarity to each other year after year make them hard to distinguish. You almost always get the player image on a white background with some graphics. It is what it is. The base cards are clean and modern, but ask me in a few years what season these came from... and I might have a hard time telling you! 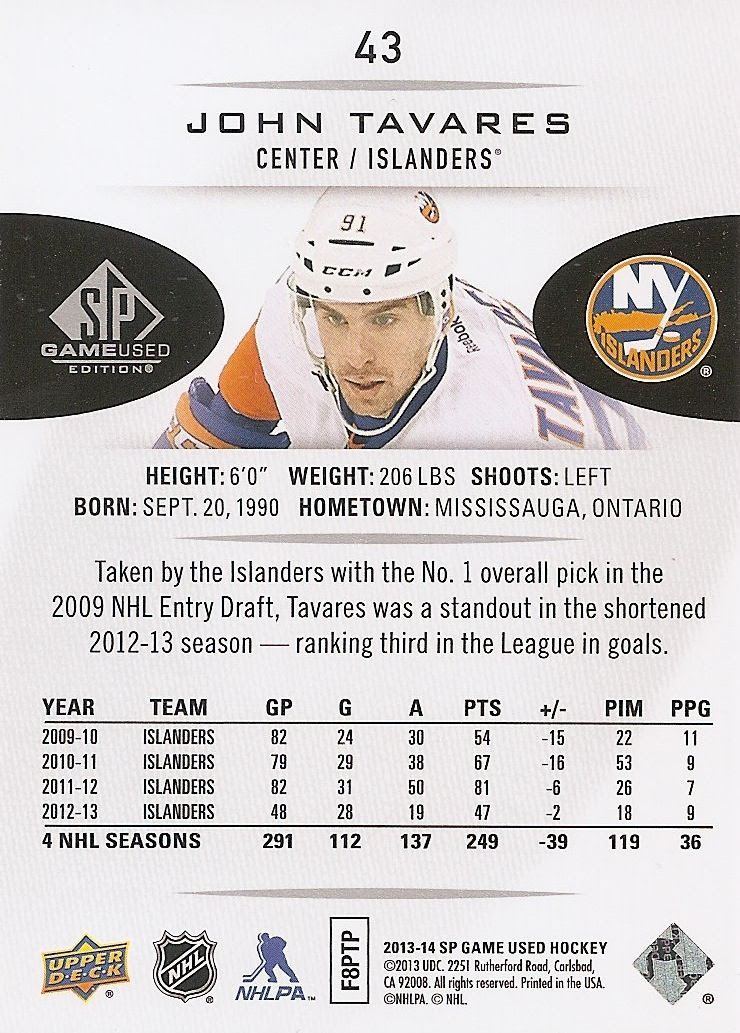 The back of the base card is standard Upper Deck fare. And that's a good thing, because Upper Deck usually doesn't stick to just one or two tones for the back. The entire back of the card has different graphical elements in a variety of different colors and shadings. Upper Deck produces the best card backs of them all. Though I do enjoy the SPGU card backs, they aren't the most radical design I have ever seen. Like the fronts, I do like the back, but they probably won't be stuck in my memory for too long.

Like Titanium from Panini that was just released, SPGU has gone the route of making their rookie cards numbered to the players jersey. While it makes the card more collectible... it makes actually pulling one much harder. I wasn't able to pull one in my box, but a quick scan of eBay reveals what they look like. Each card has a special rookie design that is different than the base. The cards feature a script looking serial numbering on the upper right corner. You'll also see that people are asking quite the high price for these rookies!

Inserts/Game-Used/Autos -
Boxes of SP Game-Used are pretty small. I remember when I got back into collecting and bought one. I though... how could such a small box cost so much!?!? It almost seems silly picking packs out of the box as there are only five of them in there. Each pack of SPGU will offer up a hit though - collectors will find jersey cards, patches, sticks, gloves, autographs, and more. 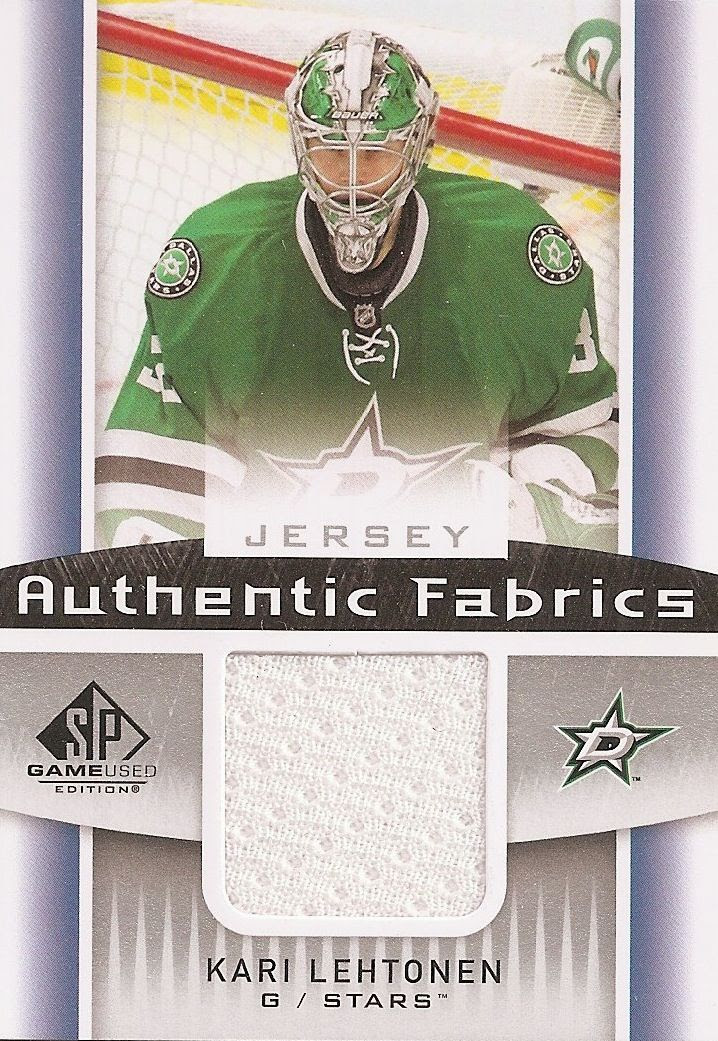 The Authentic Fabrics jersey card is the most standard memorabilia card you can find in SPGU. Usually, if you get one of these in your packs, you'll be disappointed. Packs of SPGU range from $20-30... and getting a plain jersey card is not what it once was... even for star players. The jersey swatch on these cards is medium sized. The design of the card is a bit mundane though. They look like something that would have come out a few years back. Somehow UD dropped the ball on the look of these cards. 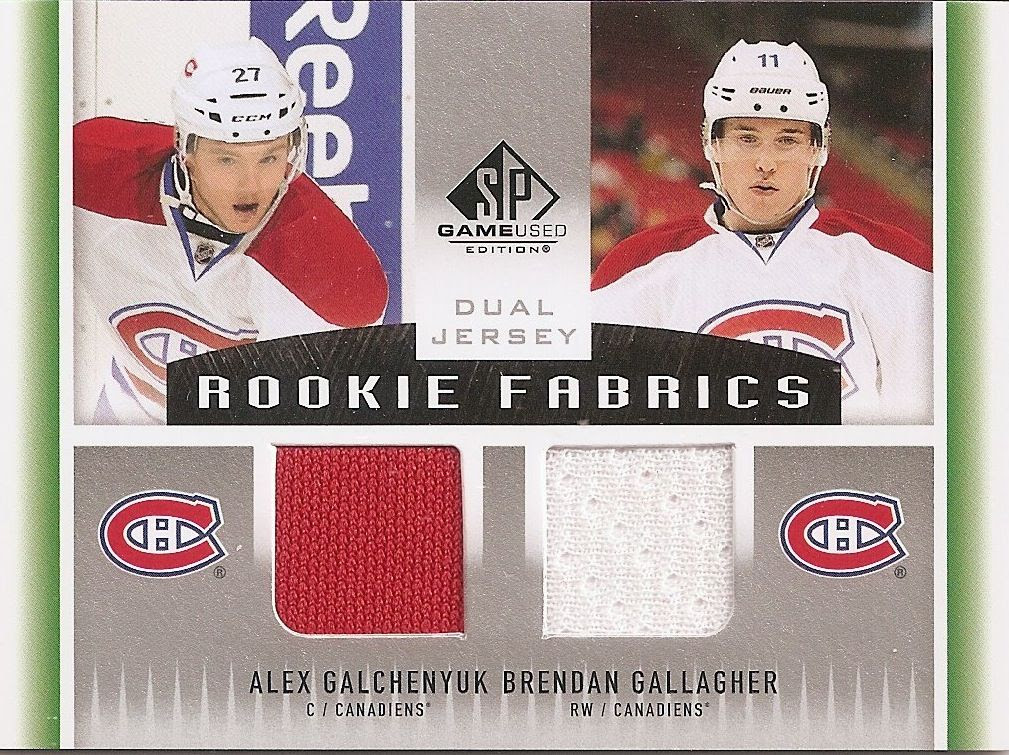 The Authentic Fabric cards also come in dual swatch variations as well. The Galchenyuk/Gallagher card shown above is an example of one with two pieces of fabric. Unfortunately, the memorabilia pieces are much smaller here. These dual card share a similar design with their single counterparts. And while I always like continuity in design, it's too bad I didn't enjoy the look of the regular single memorabilia card to start. A saving grace with this card type could be a potentially nice patch parallel version of these cards. Of course that is relying on the memorabilia pieces to overcome the design weakness. 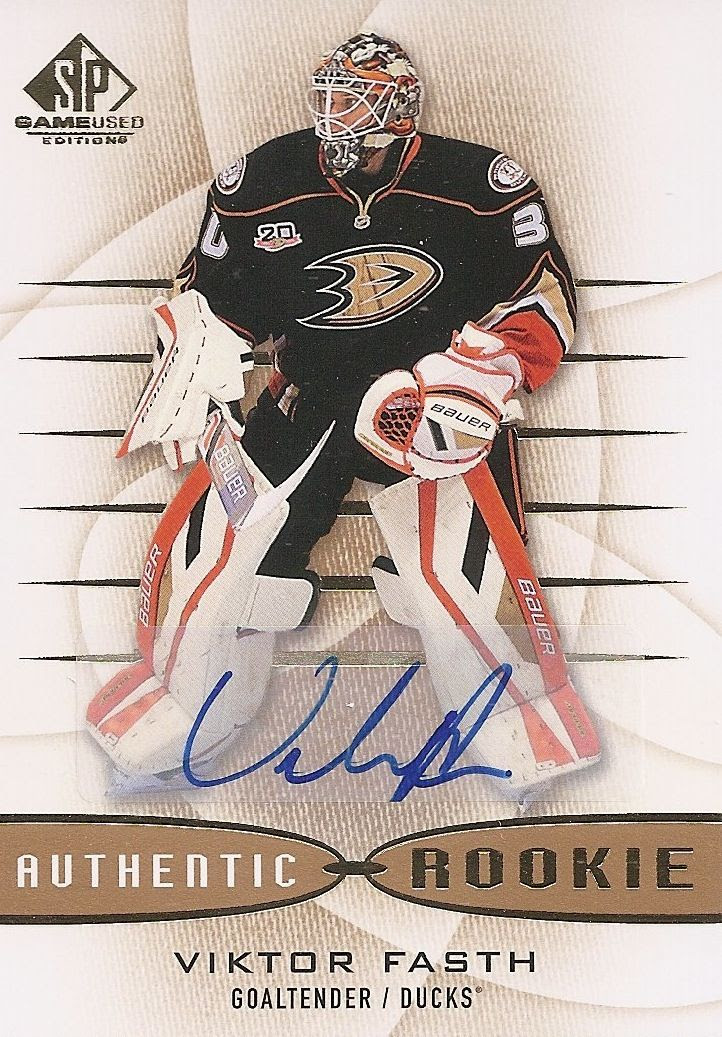 The base cards and rookie cards come in autographed parallel versions. I was able to pull an autograph of rookie Viktor Fasth of the Ducks. These autograph cards are not numbered and simply have a sticker slapped onto the front of the card. I'm not a fan of cards having autographed stickers just willy nilly on the front of a card. These are fine cards, but I wish Upper Deck had put more thought into them. I guess the good thing is that now I have an image of what a rookie card out of SPGU looks like! Just imagine this card without the sticker auto and a serial number to 30. That's what the Viktor Fasth true SPGU rookie would be like. It would also be worth a lot more than this autographed version!

My other autographed card was of number one draft pick Nail Yakupov. I'm not showing it because the card is a redemption. My box didn't yield any crazy huge patches or unique memorabilia pieces (like net cords), but they are out there for collectors to find and pull out of boxes. Manufactured autographed letter patches can also be found in this year's product. Though why would you put manufactured fabric cards in a product call GAME-USED? In fact... all the rookie memorabilia is EVENT USED too. All I have to say to that is ... sigh.

Overall Rating -
SP Game-Used is a hugely hit or miss product. This year and last the price dropped, so buying it doesn't seem like such a hard pill to swallow if the box is a miss. I mean... the box price dropped about $70 or so! That's a pretty big drop!

Though buying boxes of SPGU has become more affordable, it's still pricier than the standard $100 box price for mid-level products. The incentive for SPGU is that you get a hit in every pack... but too many packs contain just the boring Authentic Fabrics jersey card.

If you're going to buy SPGU, I would recommend buying by the box only. That way at least you get something autographed. Lucky collectors may pull some very unique items, though, and that's always a big draw.

I think my box would have been better if I had gotten it in another year. The Nail Yakupov Inked Sweater I pulled was decent... but getting an autographed card of a number one pick is usually more exciting.

All-in-all, I think SPGU is a decent product for its newer lower price point. I know that collectors still hate the fact that there are probably too many jersey cards in it, but the lure of great memorabilia and low numbered rookie cards can be a draw to buy this product.

Check out a few breaks of SPGU from D&P Sports Cards in Sacramento, Ca: