Titanium made its way back into the hockey card world in 2011, but was only seen in as an add-in type product in Rookie Anthology last year due to the lockout shortened season. This year Titanium has a full-product release... of sorts. Panini decided to only distribute Titanium to Canadian Round Table Dealers and to US customers through their own online store. I know this angered many collectors. As it turns out, some US hobby shops did get Titanium, but only those who had made a pre-order of it before the distribution policy was set. Putting all the distribution confusion aside, let's just see what 13/13 Titanium is all about. 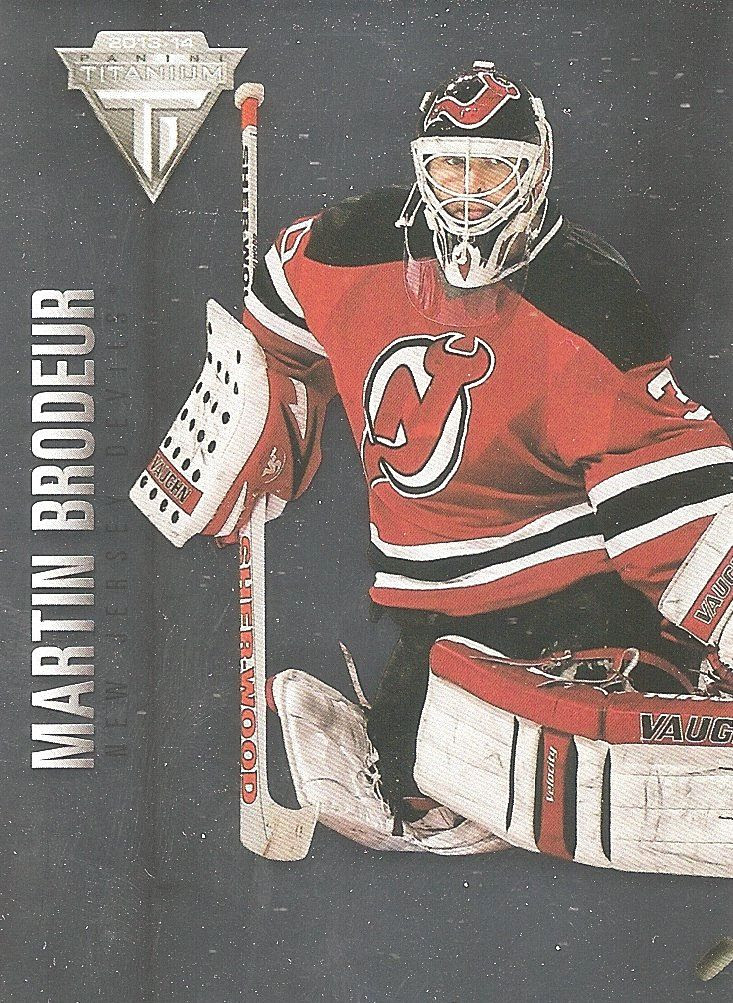 Base Card Design -
The Titanium base cards are foil! That's not normally a big deal, but to me it is. When Titanium was released in 2011, the base cards were on regular glossy stock. For a product that has a metallic theme, I expected Titanium to reflect that. It didn't then, but it does now. The base cards come on very thin card stock, similar to that of Limited. In fact, these base cards are eerily similar to Panini Limited in look and feel. For the most part, the Titanium base come with a very spartan design. The player name and team are featured in vertical form on the left side of the card. The Titanium logo occupies the upper left corner, and the player image takes up the rest of the space. The entire background of the card is silver foil, which helps the player pop off the card a bit. The Titanium base aren't particularly good looking or exciting. In fact, they are very pedestrian. These base cards certainly wouldn't inspire me to try and go for a set of them. Collectors will be just looking for the hits and rookies when they break into their Titanium boxes. 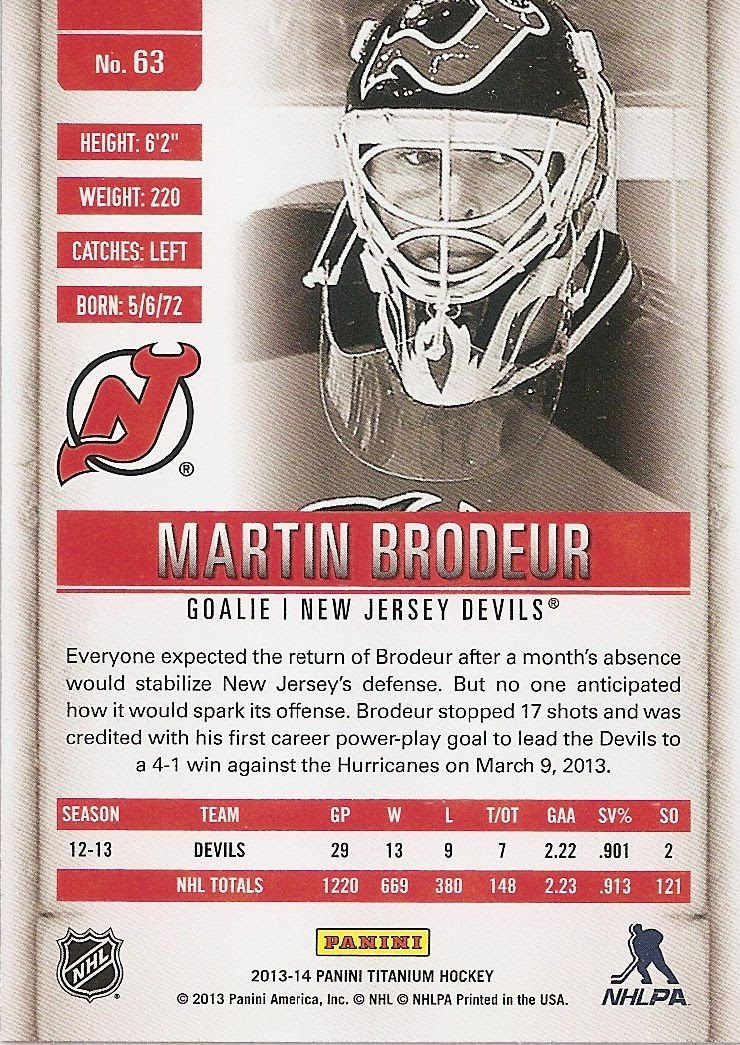 The back of the Titanium base card looks good - it's busier than most Panini backs. I like the relatively large black and white photo used. It takes up a good amount of space, and gives the back of the card some life. Many of Panini's backs are filled with geometric blocks and shapes, so I'm glad to see a larger photograph here. The team colors are used to highlight the back. All the vital information is included on the back along with a write-up about the player... but only one line of stats are provided. 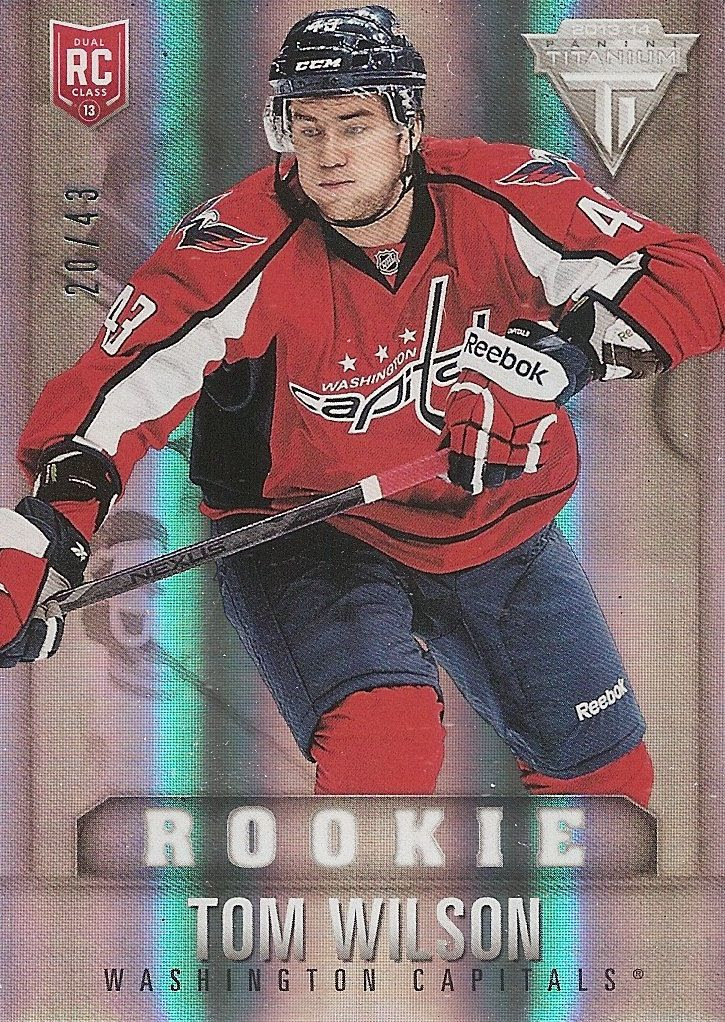 Inserts/Game-Used/Autos -
Each box of Titanium comes with only five packs. Each pack will contain a hit - an autograph or memorabilia card. Rookie cards do not count as a hit, so if you get a limited rookie card, you'll still get an auto or mem! That's pretty nice! 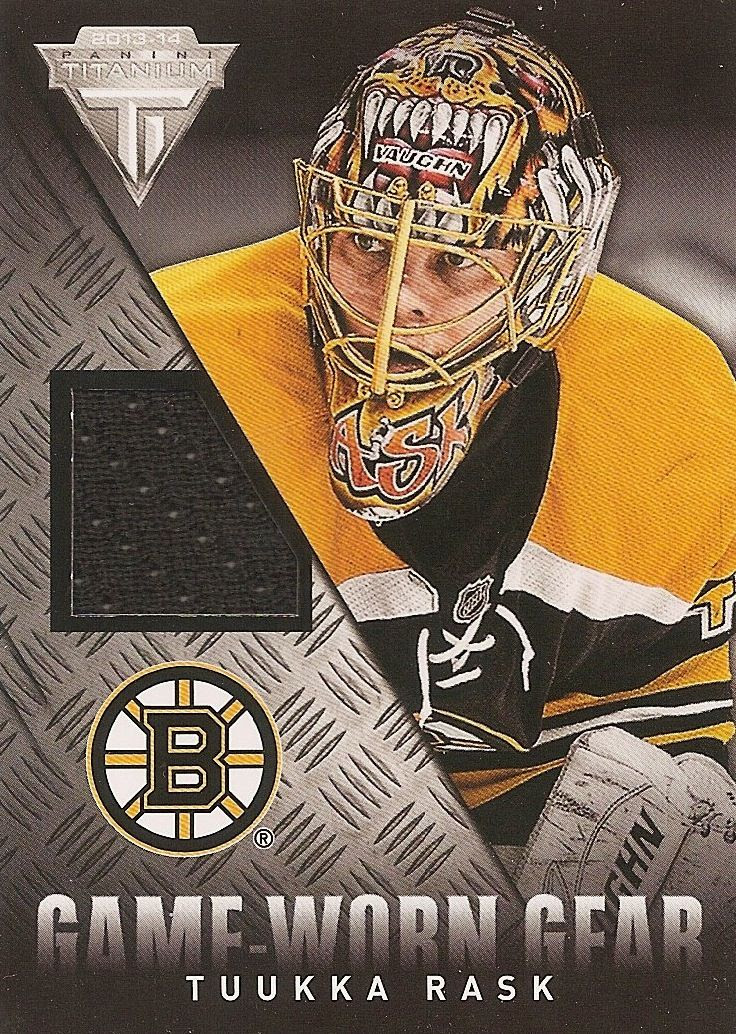 My box came with three Game-Worn Gear cards. The GWG cards are the most basic jersey insert you can find in Titanium. These are the same cards you can find all over eBay for a few bucks each. I was not happy pulling three of these in my box... it makes me wonder if I got these three because my box contained a true rookie card. I'm not sure... I can only speculate. But anyways, the Game Worn Gear cards have a much nicer look to them than they did in the past. I like how the card has gone vertical, and I appreciate the up-close photos used on them. Prime and patch variants have been inserted into Titanium. Couldn't I have at least gotten one of my three GWG cards to feature a better piece of material? Ah well. 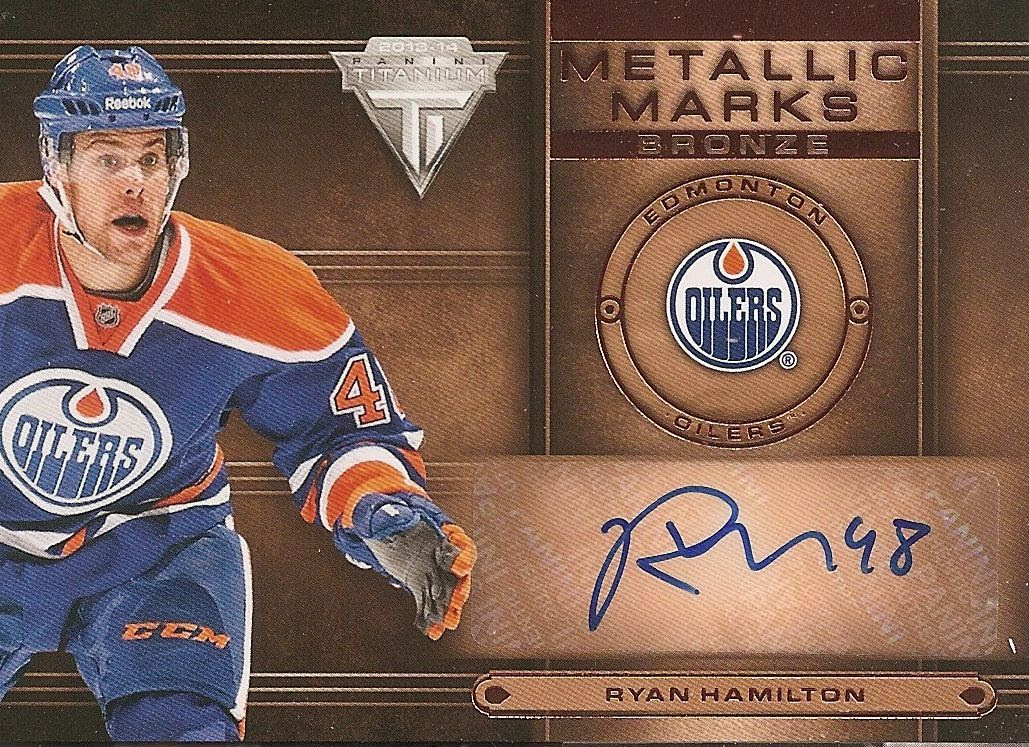 Metallic Marks are cards that feature autographs. They come in four tiers - bronze, silver, gold, and platinum. As you can probably guess, the better the metal, the better the player. The metallic marks are pretty nice looking cards. I appreciate the foil used and the metal themed look of the card. It's unfortunate that the card features a sticker autograph though. I would have also liked the card to gave a bit more girth to it. As they stand, they are the same thickness as a base card, which doesn't make sense to me if the card is supposed to represent a type of metal. I guess I have to call these cards out on their autograph color too. Wouldn't it have been a bit too nice to have the players sign in the ink color the card was named? Maybe that makes too much sense. 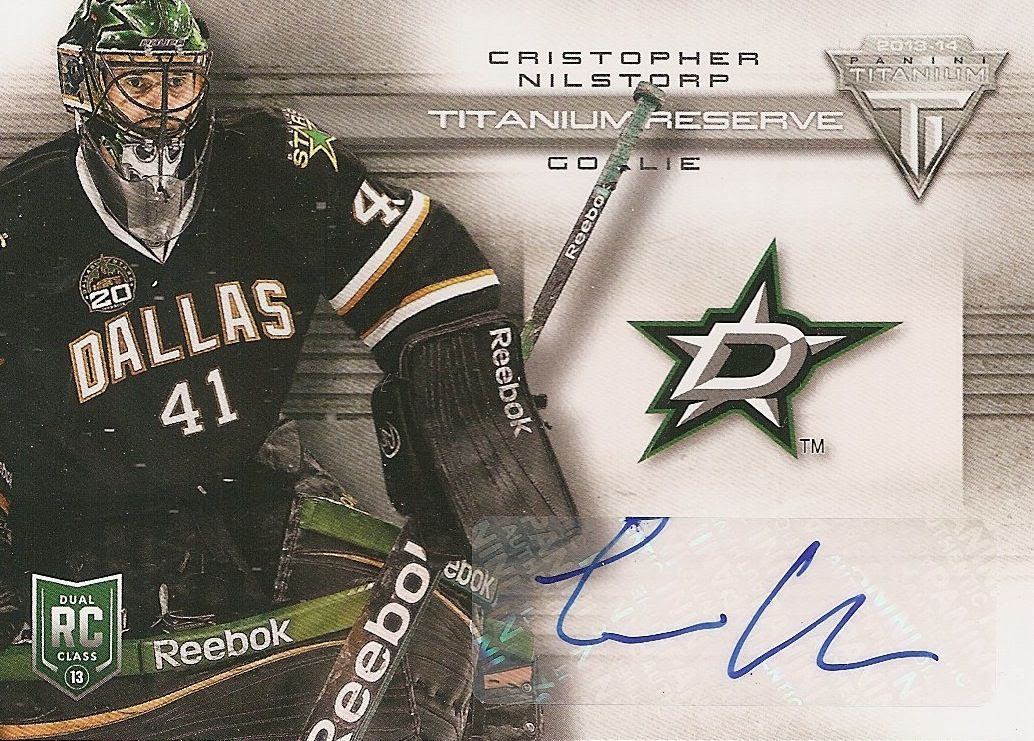 The Cristopher Nilstorp card shown above is a Titanium Reserve autograph card. Like the Metallic Marks auto of Ryan Hamilton, this one is also on a thin cardboard stock. I'm not sure what's up with Titanium and thin card stock, but it just makes the cards feel 'lesser'. The autographs feel like something I would get out of a lower end brand like Score or Topps. You can see clearly one of the reason why collectors don't like sticker autographs on cards with this example. Nilstorp's autograph has been cut off at the top and there is a smudge as well.

With three Game-Worn Gear cards in the box, there wasn't a whole lot of variety to see. It would have been great to get one or two less GWG cards and have a different type to show a bit more variety... because Titanium actually has quite a bit of variety in the product. Collectors can find quite a bit of jersey, autograph, and patch cards in boxes. My guess is that since my box came with a true rookie card, the other hits were more of the thrown-in variety.

Overall Rating -
The box that I broke for review did not showcase what Titanium really has to offer... but it does show that anyone can pull a true rookie card from the product. If I had pulled a big name rookie out, I think it would have been double or triple the price I paid for my box. Titanium is really about getting the desirable rare rookies. And I guess I should be happy that I got one. Even the smaller name guys sell for a good amount of coin!

As far as other hits go, Titanium does have some great hits to find. I didn't pull one, but I really like the patch autographs available in the product. Like them or not, the autographed sweater cards are also back. I pulled a pretty rare one last year. Those are pretty much love them or hate them type cards.

With a box being around a hundred dollars, Titanium is a decent choice for collectors to buy. It features some very desirable rookie cards and has some nice patch and auto cards to find in it as well.

Though my box wasn't particularly great in my opinion, I would still recommend Titanium as a product to try. It's a product that the hobby has liked and enjoyed, and I don't see that changing with this iteration.


Check out my box of Titanium here: