So, now that it's the end of the of they year, Panini releases its biggest and most premium... wait a minute... it's not even half-way yet! But here it is, Dominion Hockey! As most of you already know, Panini has changed Dominion's place in the hockey card line-up. Rather than being their highest end release, Panini has released it much earlier and reconfigured the product. Though Dominion has changed much in this way, the cards themselves retain a very Dominion-like look that collectors have grown familiar with. Dominion just released in the United States today (Jan 3rd, 2014), but came out much earlier in Canada... so many collectors north of the US border have already seen quite a bit of this product already. 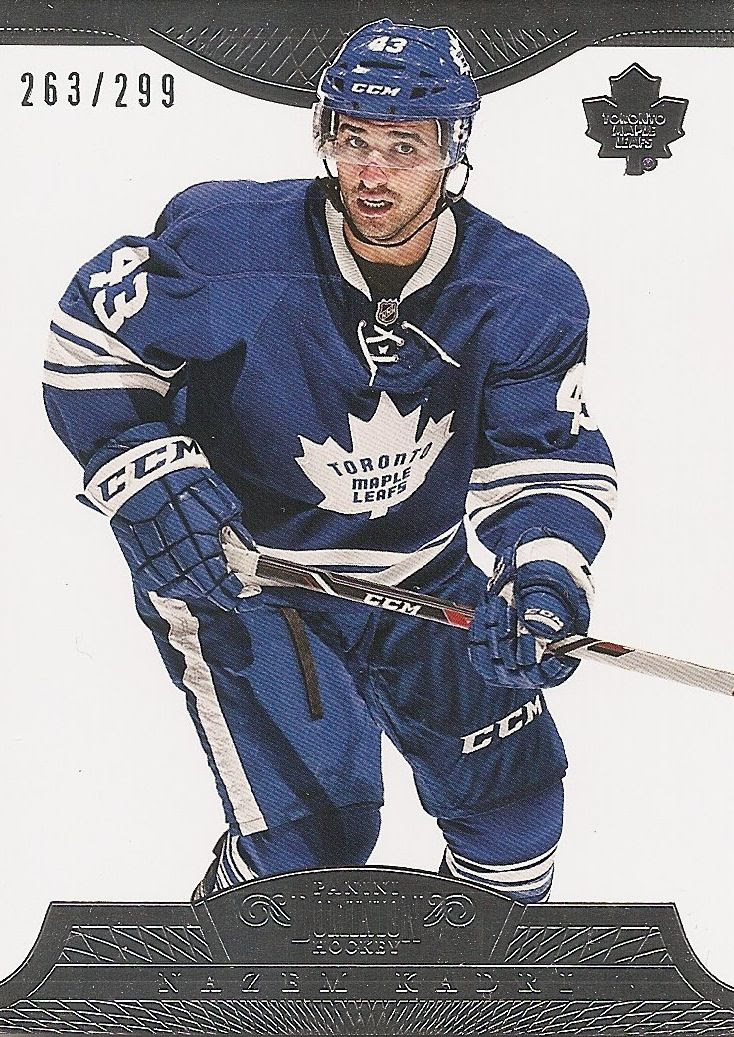 Base Card Design -
The Dominion base cards are just what collectors should expect in a product with a $200/box asking price. The base cards are serial numbered to 299 and have a super-premium look and feel to them - there is no wacky 'kid stuff' to be found here. The base cards come on thick stock, but no comically thick stock like they did last year or the year before. 11/12 and 12/13 Dominion base cards were very low thrill and plain, and the thickness of the card just didn't resonate with them. The thinner stock this year is much more appropriate. The cards feel sleek not only in look, but also in their girth. The all white background is bordered at the top and bottom by designs etched in silver foil. The intricate etchings, fonts, and logos add to the premium high-end feel. These base cards evoke what Dominion is, and they are much improved over the last two years' clunky rounded foil border design. 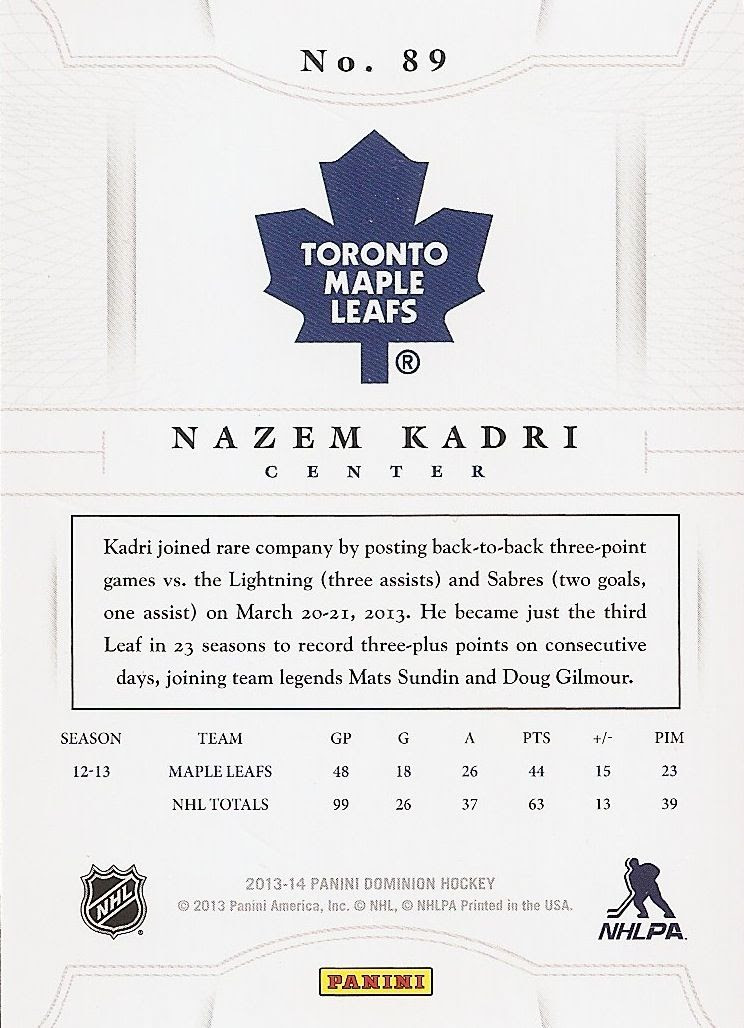 The back of the base cards are as simple as the fronts. Everything is done in black/white/grey except for the team and Panini logos. The sparse backs are what we come to expect from the highest end cards. Each card back has a short write-up of the player as well as their stats from the previous season. The upper and lower borders of the card have a design that matches the foiled front. It's a nice touch to bring both sides into harmony with each other. 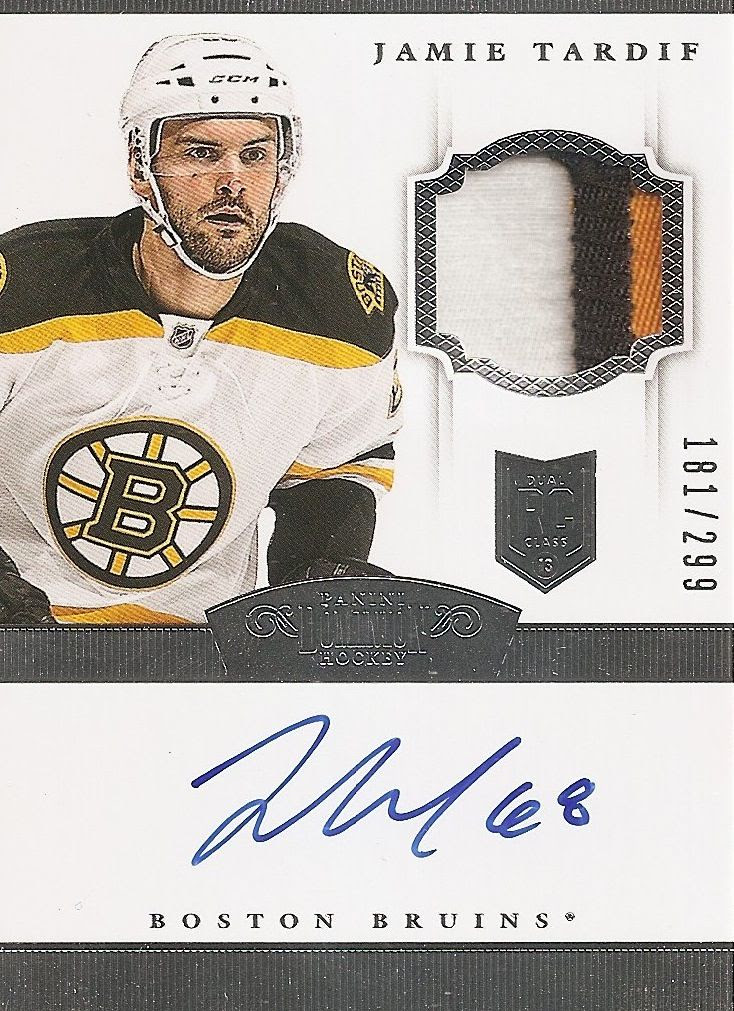 The rookie cards in Dominion come towards the end of the set. The standard rookies are numbered to 299 while the 'better' rookies are numbered to 99. Each rookie card features an event-worn patch (probably from the photo shoot) and an on-card signature. The RPAs this year follow a similar design path to Dominion rookies of the past couple years. The color scheme is consistent with the base cards in that the entire card is white with silver foil. The cards are designed in a way that makes sense. The area for the autograph is large, and the spaces for the photo and patch are appropriate. The cards look very good. My only issue with these cards are the patch windows. They seem noticeably smaller than in previous years. Does this size reduction correspond to Dominion's fall from top-dog status in the Panini line-up? Who knows?!?! But it is something I noticed. Despite that, I do enjoy the look of these rookie cards quite a bit. A well designed card is a well designed card.

The Dominion base cards and rookies are right up my alley in terms of how they look. There has been a little concern about chipping on these cards though, and I've seen a few cards with chipping on the foil. That is something to look out for when you buy your boxes or singles of Dominion.

Inserts/Game-Used/Autos -
Each box of Dominion comes with one giant-sized pack of cards. Though the pack may look big, you're only getting five cards inside. Besides the base card and the RPA, you'll get three other hits inside. From what I have seen so far, many boxes will contain redemption cards. My box had a Mikhail Grabovski autographed patches redemption. 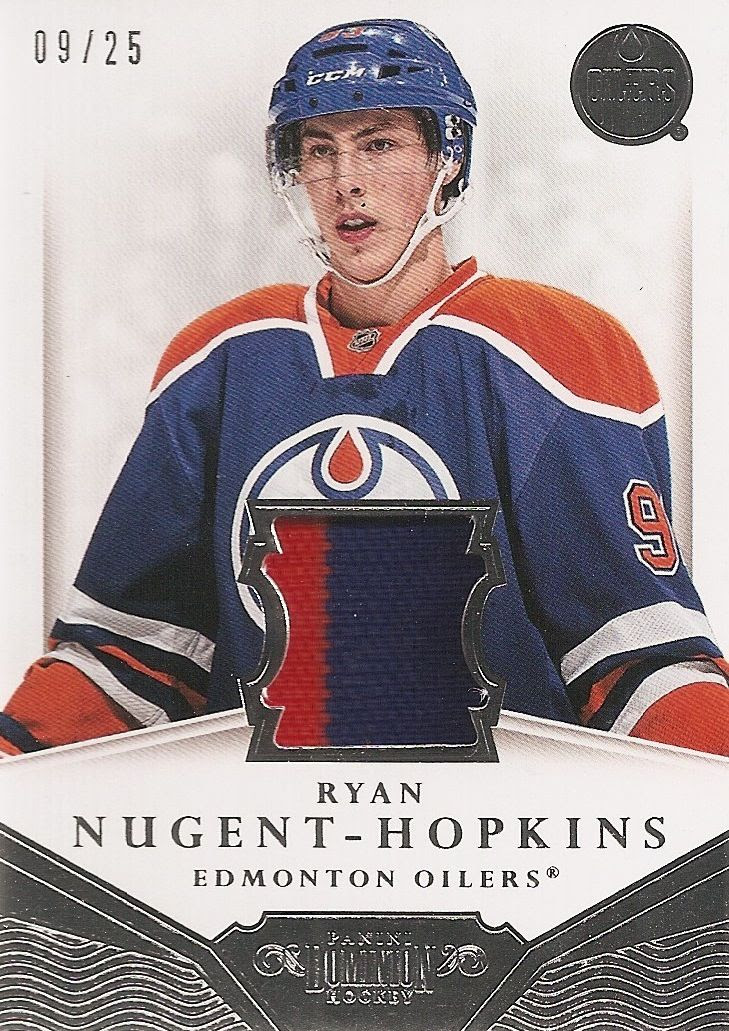 The Ryan Nugent-Hopkins jersey card shown above is a nice example of how Dominion does a jersey card right. The jersey window itself is intricately designed, and I really appreciate the photo used for the card. There is plenty of foil, and the card is relatively low-numbered. I'm sure this card probably won't demand a very high value on the secondary market, even though it is of RNH, but it's a very nice card that I would enjoy having.

My biggest hit from the Dominion (I want to say tin, but that doesn't apply anymore) box was this booklet of Pavel Datsyuk. The sports card hobby has gone bonkers over these booklet cards. This particular booklet is very nice, and the scan does it ABSOLUTELY NO JUSTICE. In person, the card has a three-dimensional effect to it that looks great. But even as I praise this card for its good looks, I think the booklet card thing is a bubble waiting to burst. To be honest, this card could have been done without being a book. I always thought of a book card being cool because you could cram more signatures or game memorabilia into one card. When you boil down to it on this card, it just has one autograph on it. The part that collectors desire is just that one auto on one half of the card. I'm glad to have this card - in fact, I've been wanting a Datsyuk auto for some time now - but I'm just not sure how long a run these booklet cards will be a hit with collectors... especially if they don't contain multiple items of interest imbedded in them.

Obviously one pack of Dominion cannot give an accurate sampling of what collectors will find in the product. But given what we know from the Dominion releases in the past, there will definitely be high dollar hits to find in this product. Look for NHL shields, silver engraved cards of Stanley Cup winners, different kinds of booklet cards, parallels, and more!

Overall Rating -
I was a bit skeptical about Dominion this year. I didn't like that it was being released so soon, and I didn't like the new configuration. I really wanted Panini to grow Dominion as its upper echelon offering to hockey card collectors. Now that it has an earlier release date and different pricing, I can see some positives for the future of Dominion.

First of all, you are paying less and getting less cards. To me, that's ok because I still believe you will get at least one 'good' hit out of the box. Which was the same case it was with the Dominion of old. Dominion boxes used to pump out multiple standard jersey cards or no-name rookie card autographs. This slimmed-down version of Dominion kind of gets rid of the excess. And I like that. I'd rather pay this price for Dominion and get what I got than pay double that and end up with more fodder.

And second, the pricing makes it easier to buy and try $200 is a lot, but I kind of think of it like getting two mid-tiered hobby boxes. When you get into the $300+ range... that's when buying a product becomes a huge challenge on a budget.

So all-in-all, I have to say I'm very happy with 13/14 Dominion. The cards look great, and the price is at a place that's nice. No, it's certainly not cheap, and not for everyone, but I think it's doable for more collectors than it has been in the past.

Breaking the box of Dominion was great fun, and I hope you get a chance to break some too... and if not, perhaps pick up a few singles on the secondary market.


Check out my box of 13/14 Dominion that I broke at D&P Cards in Sacramento, Ca: