Call me a glutton for punishment... but I went back to the card aisle at Target for this week's Retail Review. If you've been keeping up with the past three weeks of Retail Review, they haven't been pretty. But at least Target does have the newer products on the shelves and readily available for me to buy. UD1, Black Diamond, and Artifacts were my choices. UD1 for me is always the safest to buy at retail, so I went for it!

We all know what comes in these Series One blasters... it's going to be two Young Gun rookie cards and a chance at some inserts with MVP base cards thrown in the mix. As I've already stated, the double rookie class was super-hyped, but isn't living up to the initial excitement it produced. Still, it's a better crop than last year's (which I know isn't saying much).

My main beef with Upper Deck Series One this year isn't so much the rookie class (as Upper Deck doesn't have anything to do with the players coming out), but with the design. The design of this year's Series One doesn't appeal to me, and according to collector comments I have received, they agree too. What will billed to be a huge year for hockey cards is turning out to be somewhat of a letdown.

Let's hope that this box isn't a letdown. Let's see what comes out of it:

Review -
Yay! Finally a box that was halfway decent! This blaster was definitely above average, and way better than the previous three boxes I got at Target. No, there wasn't a huge hit in this box, but I think the overall quality within was good.

In my pile of base cards I was able to pull a couple San Jose Sharks and also a Sidney Crosby. For a person who isn't in the hobby, getting a couple players from your favorite team and a superstar like Crosby in the base cards would be exciting.

I did get the usual MVP cards this time around, but at least one was a rookie card! The rookie cards come one per box (or so) in hobby, so getting one in a blaster was great. My MVP base card was a sepia toned NHL greats card. The sepia and MVP design class in a neat way. I actually like it.

For the first time in a while I had to give pause and think about which cards to put in the top three. Here they are: 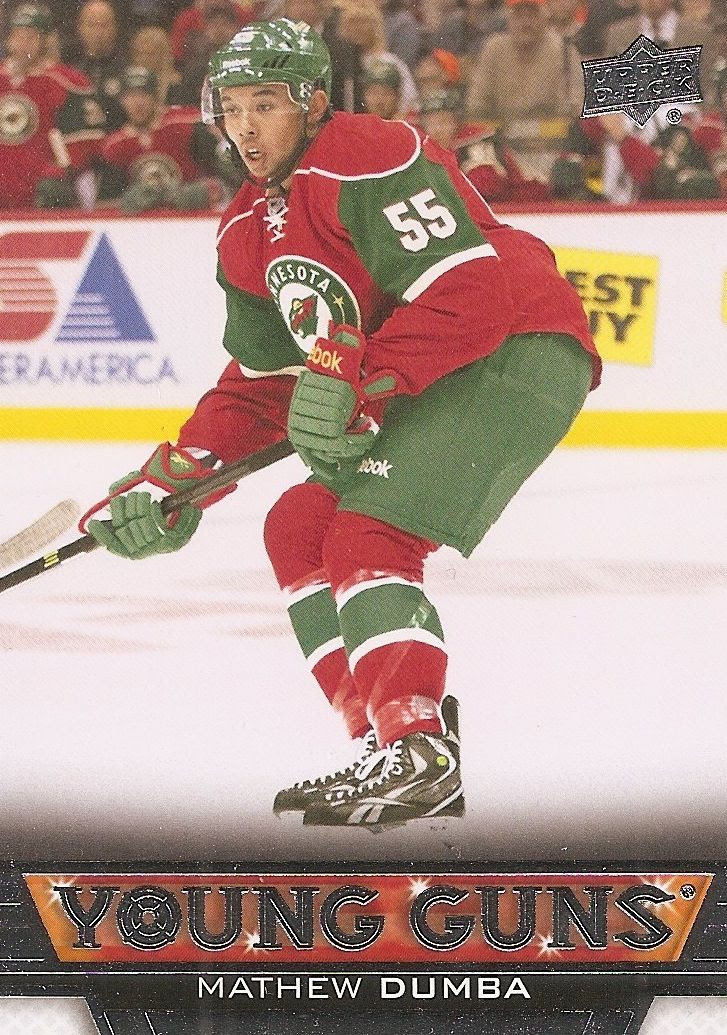 #3 - Mathew Dumba Card No. 231
I know Dumba from cards of his I've pulled in ITG products and also from seeing him on various NHL television programming. I still haven't hit a big Young Gun from this rookie class yet. Dumba gets me closer, but his Young Gun doesn't even bring in $5 on eBay. 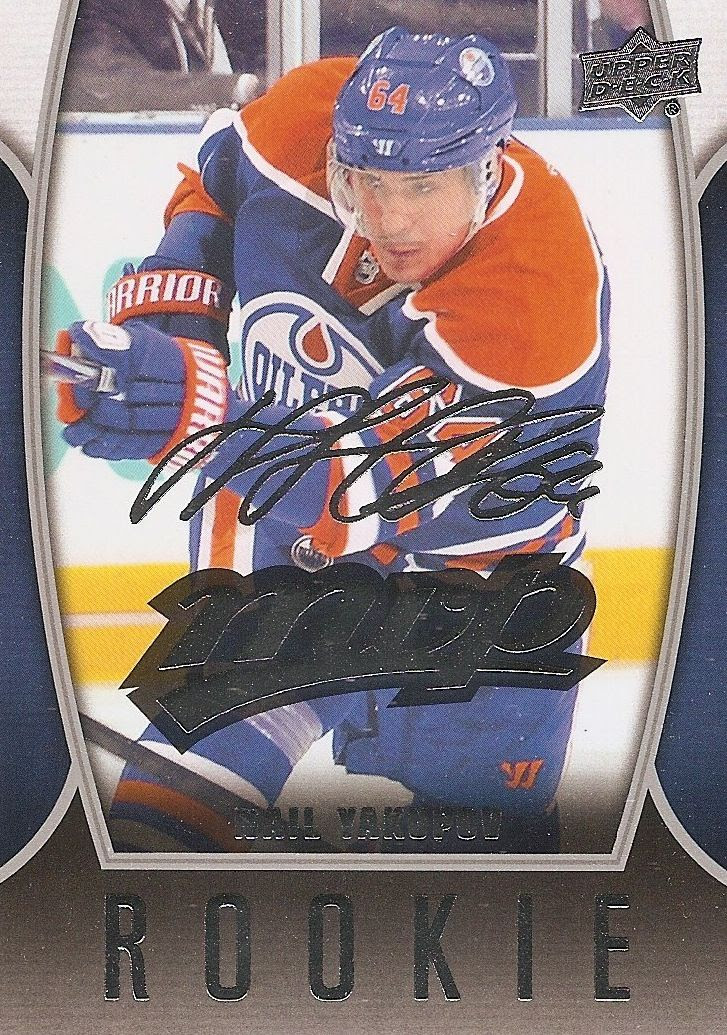 #2 - Nail Yakupov MVP Card No. 52
Finding this Yakupov MVP rookie card was very nice. Yakupov has been a bit cold recently for collectors as the Oilers and his play have been lackluster. Still, getting a Yakupov is a nice. I'm not sure how great pulling a Yakupov rookie will be in a few years, but this year, it's a good pull. 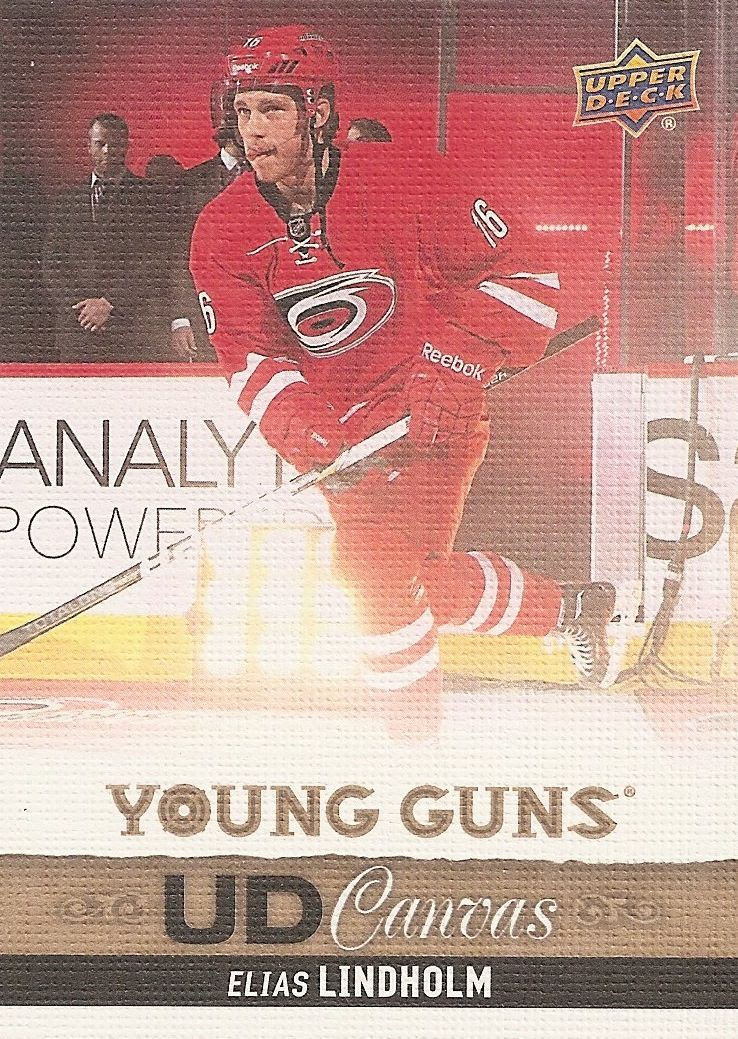 #1 - Elias Lindholm Card No. C99
The top card has to be this Lindholm UD Canvas card. It's my first Young Guns Canvas from this year. The Canvas cards have been big hits these past few years, and the Young Gun versions have been immensely popular as well. I'm glad I was finally able to pull one of these out.

Overall Value -
This box was a superstar if I were to compare it to my previous few boxes. But looking into it, it was just slightly above average. There were definitely some highlights from this box, but I was a little disappointed getting so many all base packs. Well, this was definitely a trend up... I'm hoping it will keep rising as I continue with my next Retail Review next week!