I ran out of retail products from dacardworld.com so I had to make the trek to the card aisle at Target for today's Retail Review. As usual, there wasn't much selection to be had, but they did have Upper Deck Series One in stock. I don't like paying full price for retail boxes, but seeing as this was the most alluring product on the shelf, I just had to do it! 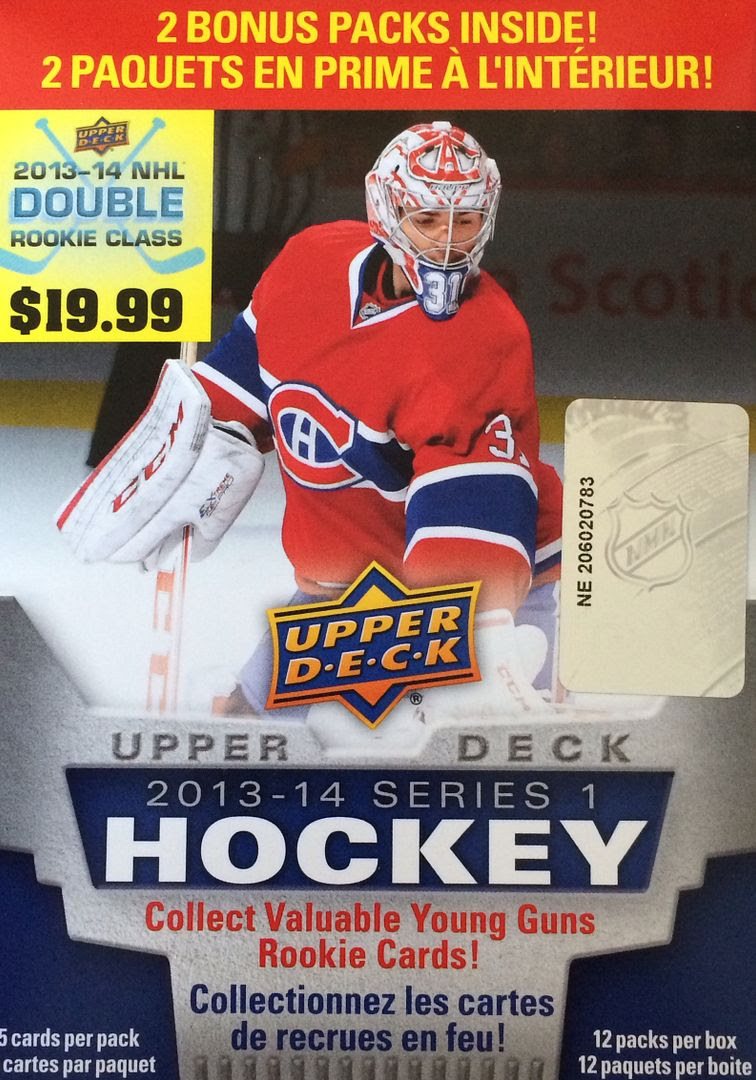 Upper Deck Series One (and Two) blasters are always solid choices to buy at retail stores. UD gives you a good number of packs to open, and collectors can always look forward to getting a couple of Young Gun rookie cards. In my recent Panini blasters, I have gotten jersey cards out of them rather than popular rookie cards. In some ways I think getting a jersey card is 'better' than a mass produced rookie... but Young Guns can often be valued the same or more than a standard jersey card. In fact, if you hit the right Young Gun, it will be much more valuable than even the best jersey card in the entire product. So I guess Upper Deck is really the better value given similar pricing.

As I have stated in my Cardboard Commentary articles, the double rookie class has so far been just middling in terms of interest. I just haven't seen a ton of excitement for the new rookies from collectors. Because of this, I think the rookie cards have only been seeing average selling prices... nothing too big. You definitely won't 'hit the jackpot' with a bigger name rookie out of this year's class. It will still hold good value, just not the (relatively) astronomical ones like in previous years. Overproduction may also have a role in this as pointed out by some of my commenters.

Let's go ahead and open this blaster up:

Review -
My excitement for this blaster came down pretty quick when I opened up the first few packs. The first Young Gun that came out wasn't one that I wanted, and the next few packs just had a lot of base cards. In fact, the entire box seemed to have an abundance of base cards in it. Am I just too used to getting at least some inserts from these things? I'm not sure, but this box left me wanting more.

Out of the twelve packs, only five rookies, parallels, and inserts came out - just five! And one of those was an MVP base card of Jack Johnson. The MVP base cards, to me, should be discontinued. I'm not sure how much value they add, and I just don't know how man collectors want to see Upper Deck continue the MVP card line. Was MVP ever really that beloved? It was a low end brand that never had too much value in it. I would suggest that Upper Deck nix this idea next year. 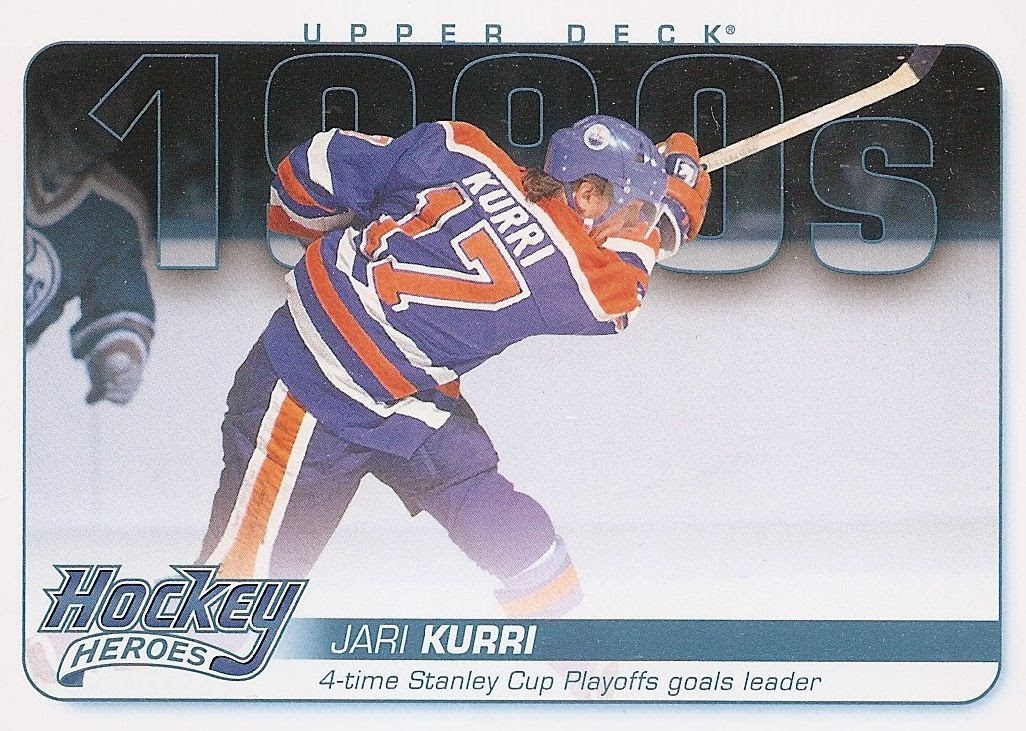 #3 - Jari Kurri Card No. HH44
Though I'm not a fan of the Hockey Heroes standard cards, the art card is pretty cool though, this Hockey Heroes card still looks good. The color scheme is great. The icy blue and white work extremely well together. 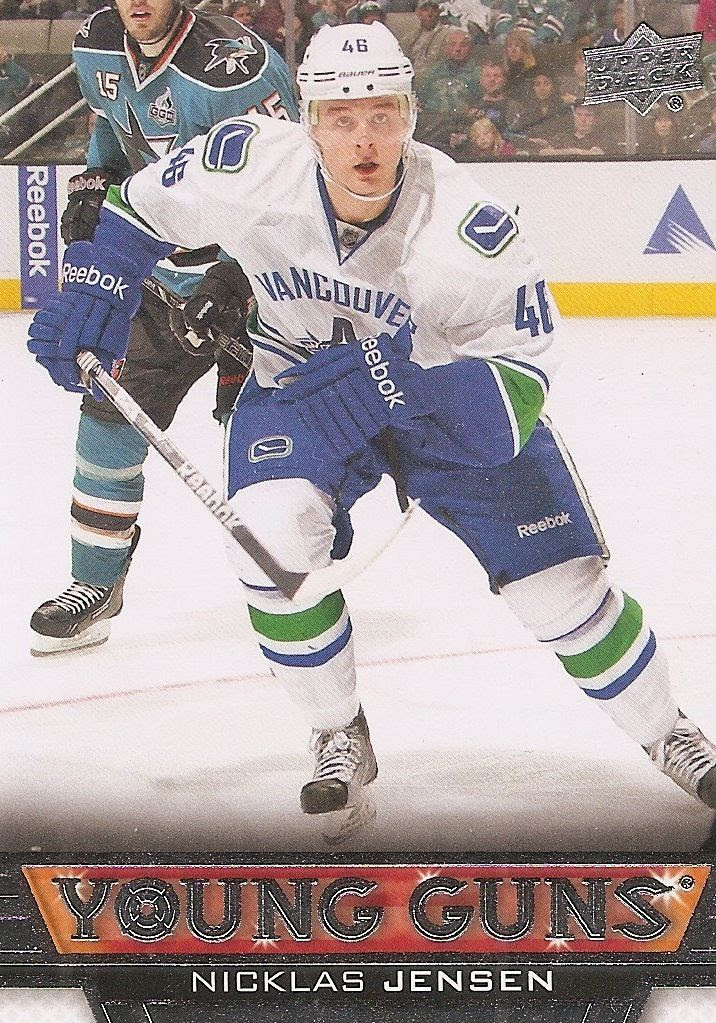 #2 - Nicklas Jensen Card No. 249
I wasn't sure which Young Gun to include in the top three... I sure wasn't going to put both of them! I chose Jensen for a very 'homer-y' reason: Sharks forward James Sheppard can be seen in the photo. Yup, that's why this card is here! My other Young Gun was Islander Brock Nelson. 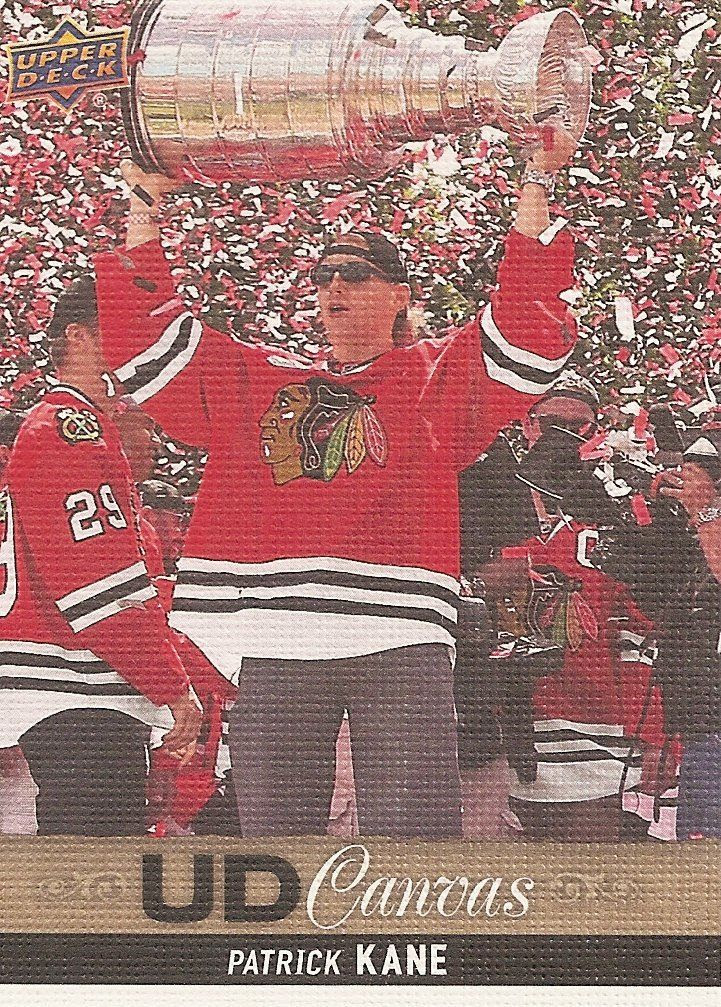 #1 - Patrick Kane Card No. C50
This Canvas card of Patrick Kane was by far the best card from this blaster. It's still not a big money card... or even a moderate money card... but it's a nice photo of a very good player. UD has put out Canvas sets for the past few years to great collector interest. I thought this year's set took a step back, but I wouldn't mind seeing Canvas sticking around for a while in future UD sets.

Overall Value -
This particular blaster of Upper Deck Series 1 wasn't so great. With all the rookies available, I got a couple that just weren't desirable. My other insert cards were also a bit disappointing. I think I'll go for another box of UD1 sometime soon since they are available locally, but I sure hope it turns out better than this box!