Upper Deck brings Black Diamond back with more rookie cards than ever. The top states that there are at least four Rookie Gems to find per box. Also to be found are real gem relic cards with real diamonds... exciting! And similarly to the past couple of years, collectors can look forward to an Upper Deck Ice bonus pack featuring the acetate Ice Premiers rookie cards. This year's Black Diamond seems to be chock full of exciting things to find. Let's hope it delivers! 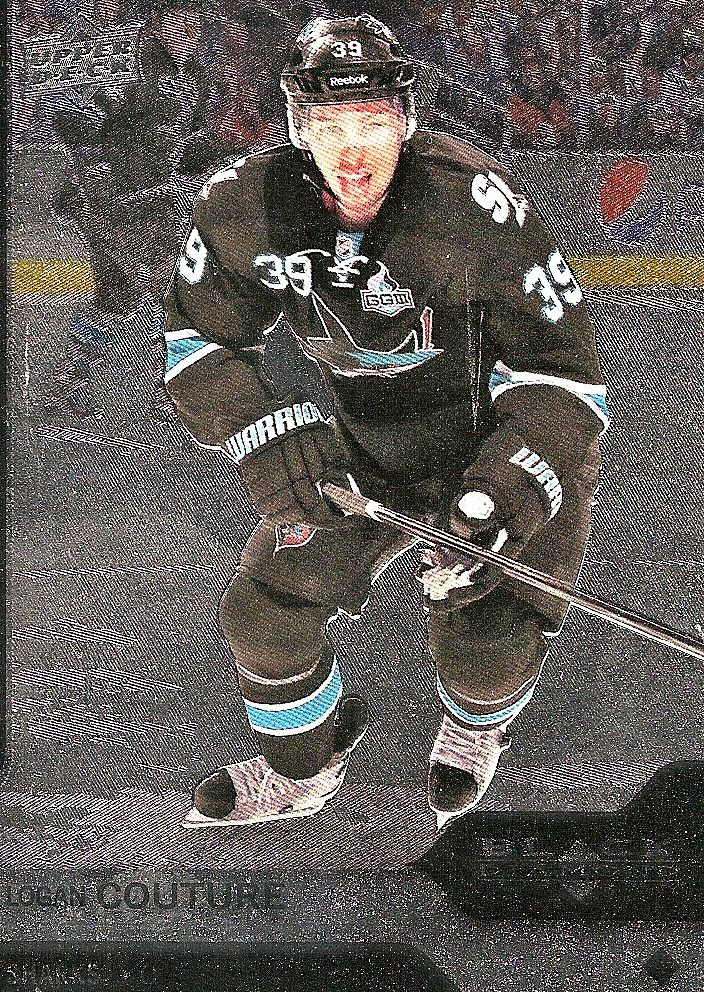 Base Card Design -
If you are at all familiar with Black Diamond releases, these base cards will feel instantly familiar. The Black Diamond base cards come on thin foil-y card stock. There really aren't any foil cards like Black Diamond available - they have their own unique foil imprint that really does set it apart from all other hockey cards. This year's base card design is a bit border heavy as there is quite a bit of space taken up by the border at the bottom and left side of the card. I don't mind it though. The large bordering adds some weight to card's look. The diamonds, which indicate the rarity of the card, have been placed in the bottom right corner. You can clearly tell if the card you have is a single, double, triple, or quad. Quad diamond cards this year appear to feature players in their All-Star uniforms like they last year. Player images are glossy and pop out amidst the signature Black Diamond foil. If you're a fan of the Black Diamond look, you're going to probably enjoy these once gain. If not, these aren't going to change your mind about them. 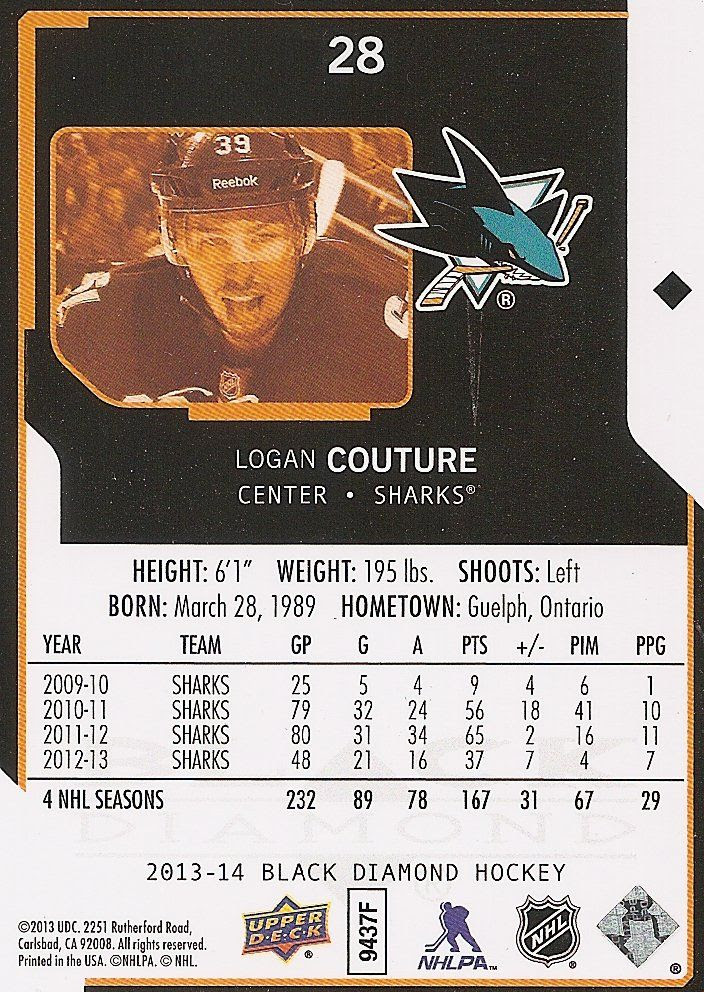 The back of the Black Diamond cards have an interesting look that I can't decide if I really like or not. The backs feature some geometric shapes and angles coupled with a color scheme that includes black, white, and a third color that colorizes the player photo. I like the design in that it gives of an almost retro-vibe... but at the same time the back's just aren't that exciting. I guess I expect Black Diamond to be shooting towards the modern and sleek rather than what I see here. The medium/large fonts used and overall look just take me back more than I want to go with Black Diamond. So for me, the backs leave me feeling a bit mixed. 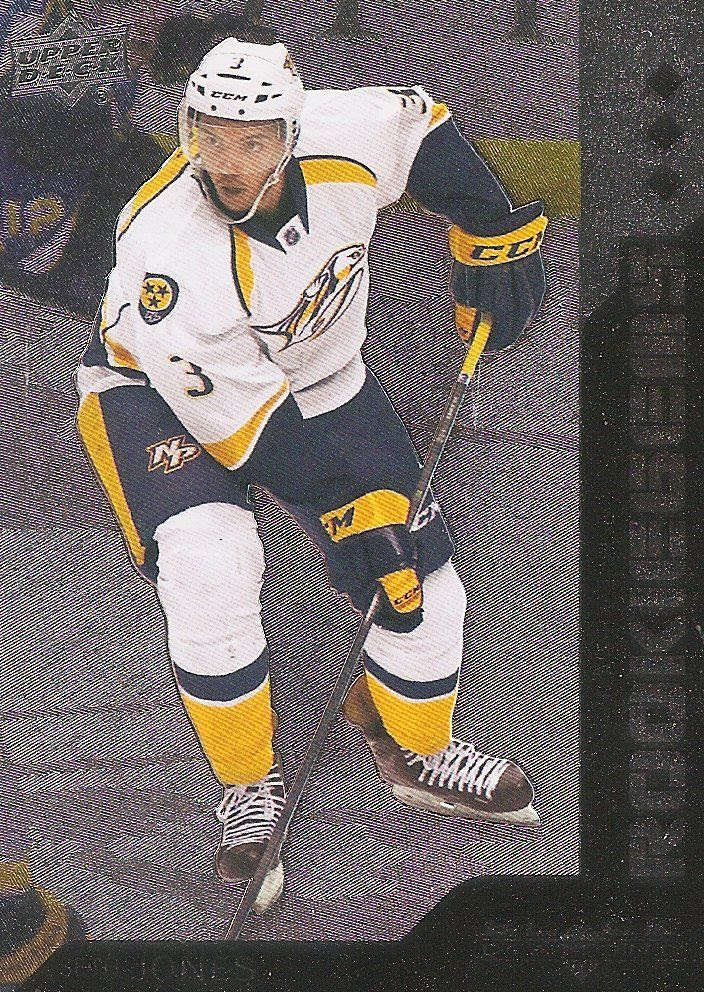 Inserts/Game-Used/Autos -
Black Diamond offers collectors quite a bit to find in their boxes. Autographs, memorabilia cards, acetate inserts, parallels, and bonus Ice cards are all a part of this product. And of course you can't forget the different kinds of diamond cards from the regular set as well! 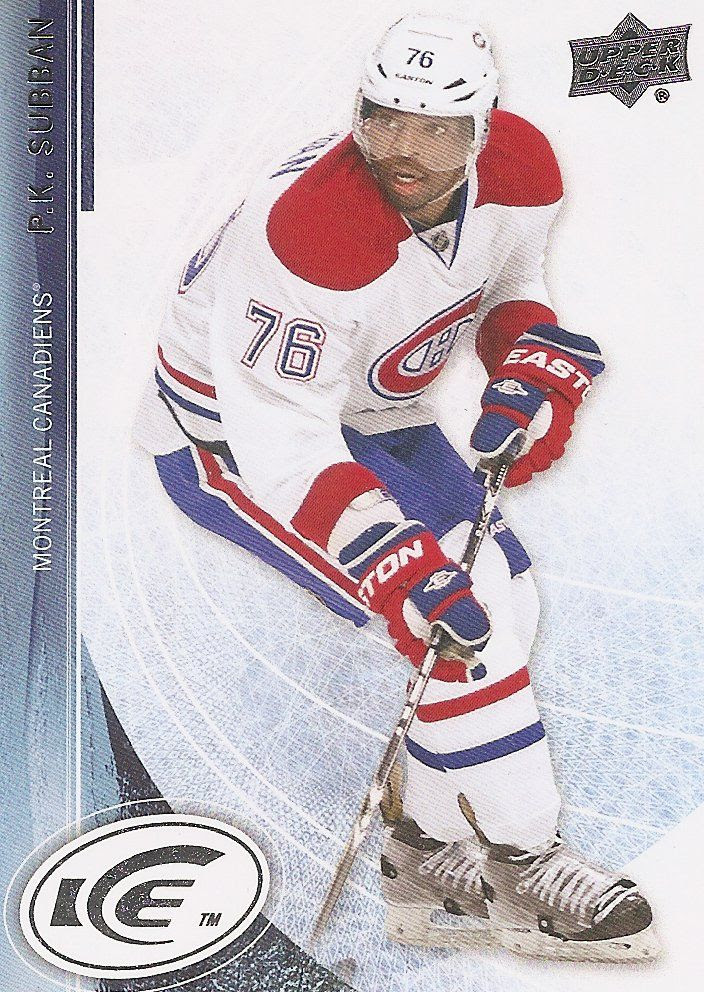 Unlike MVP (which you can find in Upper Deck Series 1), Upper Deck Ice was a product that featured one of the most popular types rookie cards you could get - The Ice Premiers card. So unlike MVP, I am happy to get a little Ice bonus pack in my box of Black Diamond. While the Ice Premier card is the main attraction, Upper Deck has always done a great job of giving collectors nice Ice base cards as well. The Ice base retain the look and feel of the old Ice cards. They are foiled nicely, and have a great 'cold' look that prominently features white and blue hues. My only complain is that these cards don't have the tactile texturing that the older Ice base cards had when Ice was a stand-alone product. 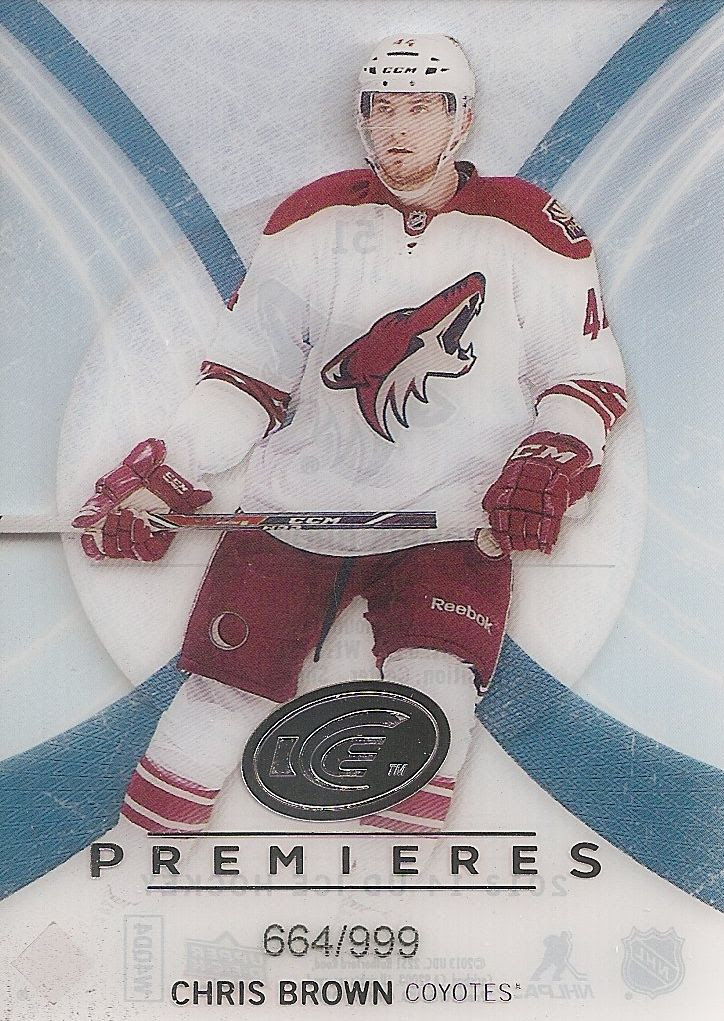 This year's Ice Premiers rookie cards are again acetate. As Upper Deck has always done, the cards have a very clean and modern design. This particular design features two large curves that meet where the player image is. It does a nice job of drawing your attention to the player. Below the player is the Ice Premiers logo in silver foil as well as the serial numbering. Ice has always had the serial numbering printed with ink rather than foil stamping. It's neat that they have kept it that way release after release. 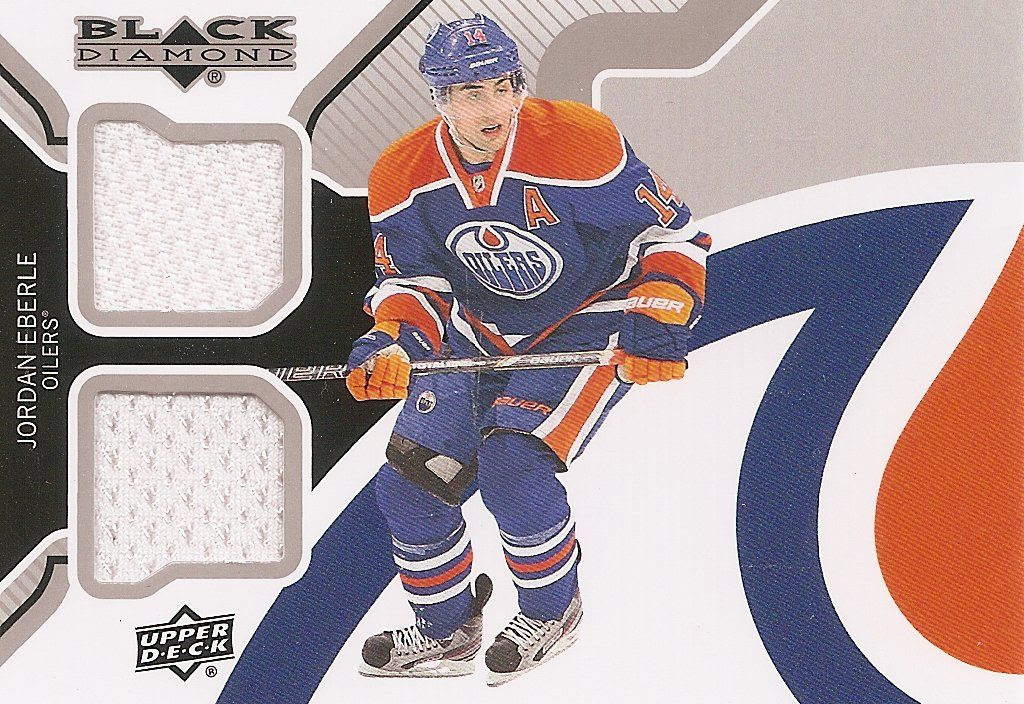 Jersey puzzle cards are again back in Black Diamond for your puzzle-putting-together pleasure. As you can see with the Jordan Eberle dual jersey card above, there is part of the Oilers logo. If you collect all the Oilers in the set, you can create a large logo. It's a neat idea, but one that few collectors actually go for. That being said, the card does look good, and the partial logo makes for an interesting looking background. 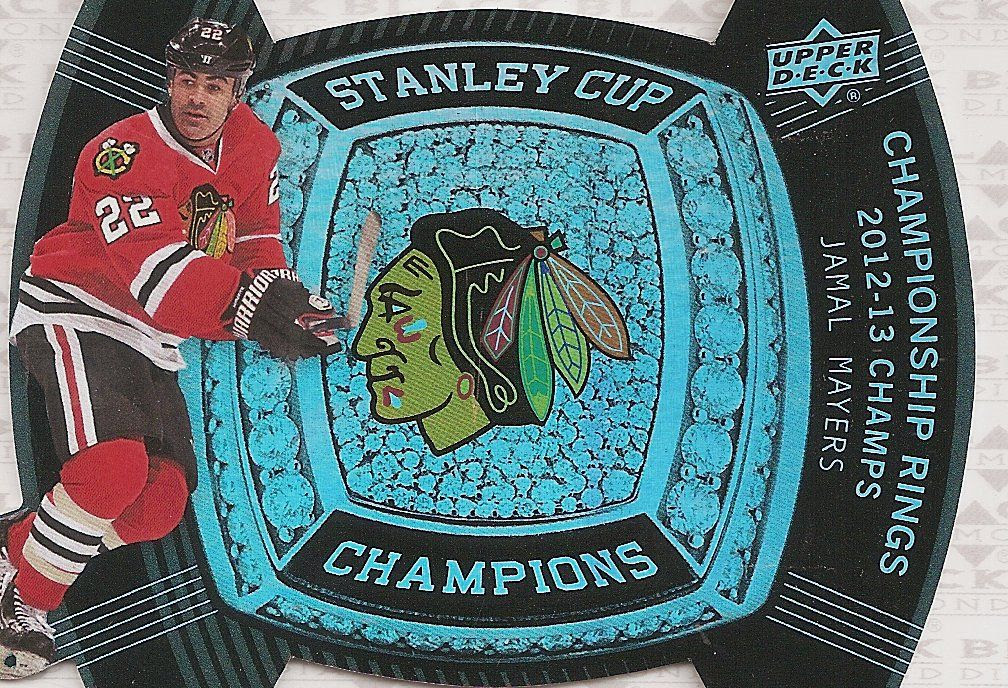 Stanley Cup Champion cards return as well. Collectors can find the 12/13 Champion Blackhawks or All-Time Great Campions on these cards. These relatively difficult pulls look pretty nice. The card is on acetate with the 'ring' design done in rainbow foil. If I were a Blackhawk collector, I would definitely try to chase down all these cards for my collection. As a Sharks collector, I'm not sure if I'm all that happy having pulled a Jamal Mayers card. I mean... Mayers was a Shark at one point... but this is not a player that I am excited to pull out of this set. 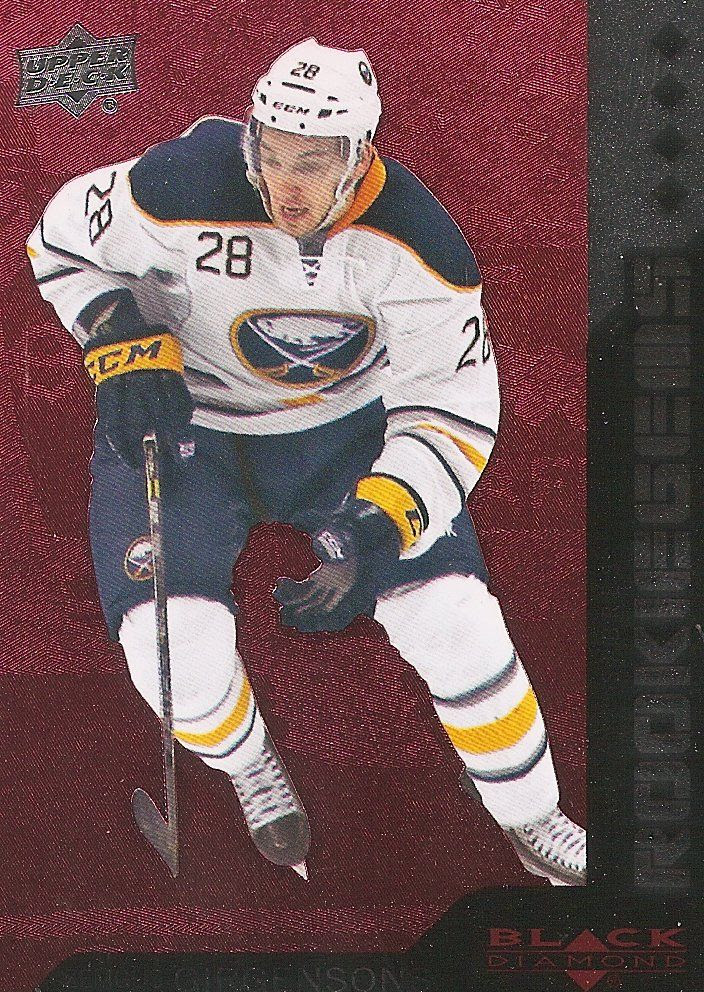 The familiar Red Rubies have undergone a slight change. The cards look similar to the previous year's iterations, but the numbering has been altered. In the past, these cards were all numbered to 100 - regular base and rookies. This year, the base parallels have been halved to just 50, while the rookies have been increased to 150. That's definitely an interesting change. It makes me wonder why Upper Deck decided to do that. Besides the red parallels, there are harder-to-get ones as well. Some of these feature autographs, and some rarer ones even feature real embedded gem stones.

All-in-all, Black Diamond has all the same things you have known and loved over all these years back with some improvements. Black Diamond is definitely not groundbreaking in its hit content, but collectors should feel at home purchasing and enjoying boxes of it.

Overall Rating -
Like many of Upper Deck's products, Black Diamond comes out each and every year and continues to be a solid product choice. Little tweaks have been made to the insert content, but in general, it's what we all know (and love). Black Diamond certainly falls into the mid-lower-end category of products. Boxes will run much less than $100 per. While it can be boring to just get a couple jerseys per box all the time, the rookie content and potential to pull a rare parallel are certainly there. Black Diamond also contains some pretty sweet looking inserts like the Championship Ring cards, Lustrous Rookies, and Hardware Heroes.

Though Black Diamond won't set the collecting world on fire, it is a product I would definitely recommend based on its price and potential content. I didn't pull anything spectacular from my box, but I was still pretty happy with the amount of hits and rookies that it contained.

Black Diamond is definitely worth a look, and a good choice for collectors looking for a product to buy on a budget.

Check out my break of Black Diamond at D&P Cards in Sacramento, Ca: