Both Totally Certified Football and Basketball have been recently released by Panini, and I was fortunate enough to open both on the same day. The two products share the same brand name, and not coincidentally, share similar attributes. Today I'm going to review both products in the same review. Let's see how they stack up! 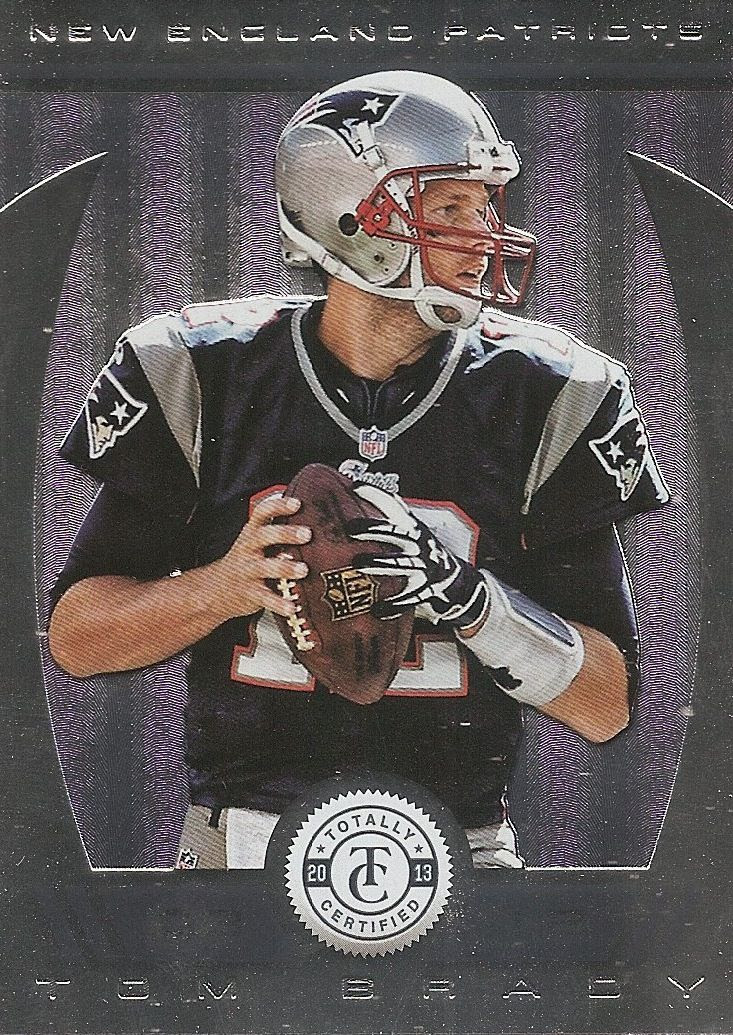 Base Card Design -
As  you can see the base card designs for both football and basketball Totally Certified are practically totally the same. That, of course, makes total sense as they are both in the same 'family'. I do like continuity among brands, so to me this is a good thing. Earlier this year I broke all the different sports of Prizm. That was a bit repetitive, but thankfully I didn't get that same feeling with Totally Certified. I think it actually had to do with the fact that you don't get a ton of cards when you buy Totally Certified. It's just six packs! 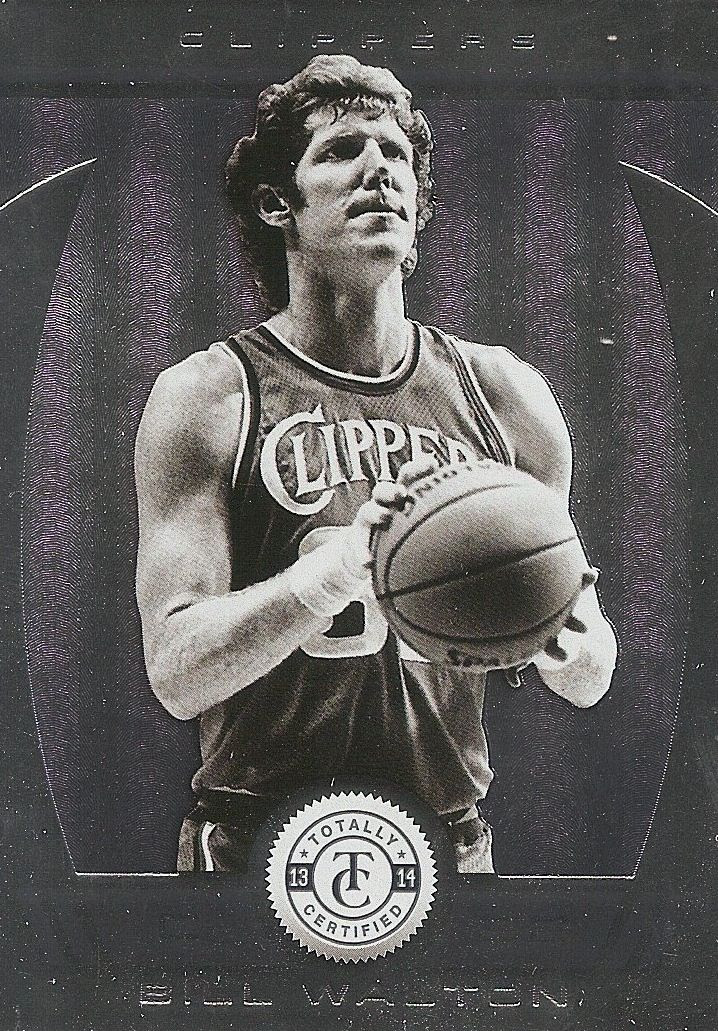 The overall look of Totally Certified base is silver, shiny foil. What appears to be an overweight 'T' sits in the background behind the player image. The background has two different foil textures that contrast nicely with each other. A three-dimensional effect is created here - which is kind of cool. Being a card that is all graphical elements with nothing 'live' save for the player, I found these cards to be a bit sterile and bland. So while the base cards are sharp and clean, they are missing an element that livens up the card. I did want to highlight the Bill Walton card above. I really think the black and white image on the foil looks unique. The scan doesn't do this card justice, but in person it's actually very cool. It'd probably be way too monotone, but if the entire set was all black, white, and silver like this Walton... that could possibly be very intriguing - and quirky. Almost as quirky as seeing Walton as a Clipper!

The back of the base cards feature the team color on the same graphic that graced the background of the front. The backs have a single stat-line from the previous season as well as a career total line. Panini has included a write up that does an adequate job of giving information about the player. In terms of design, I like the fact that the back mirrors the front. Though the back doesn't do anything to 'wow' me, it is a solid effort that at least ties into the front design.

The rookie cards in the two sets actually differ quite a bit with their handling of rookie cards. While both share a similar RC emblem, that's about where the similarities cease. On the football side, rookie cards are given the moniker Freshman Phenoms. The football rookies have a different background than their base counterparts. On the basketball side, the rookie cards follow the main base almost exactly. If I had to pick one that I liked better... I honestly really couldn't. For the football rookies, I like the fact that Panini made an effort to create a look that was different for the rookie cards. But the purest in me likes the fact that there are rookie cards that exist that look almost like any regular card in the set - like they used to in days gone by. I guess I'm saying you can't go wrong with either look here! 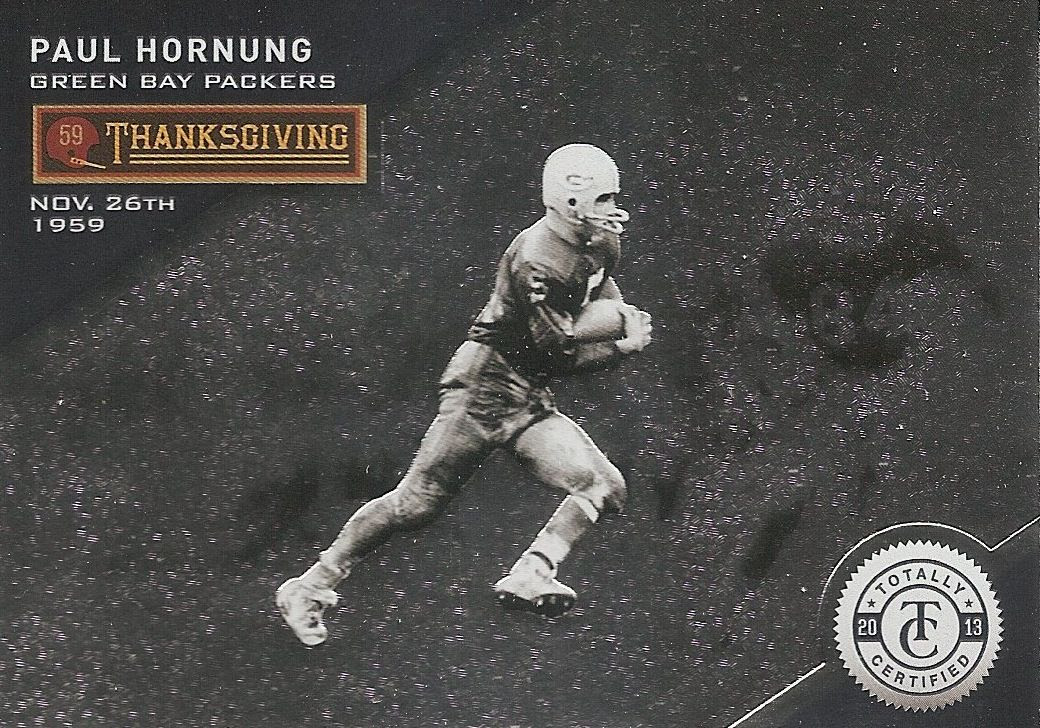 While Totally Certified basketball pretty much has one huge uniform set of standard base, rookies, and legends, the football version goes on to include a unique Thanksgiving subset. I was pleasantly surprised by these cards when I first got them in my packs. First of all, I love subsets that have a good theme... and celebrating Thanksgiving Day games definitely counts as a good theme. It's a unique set that I really applaud Panini for including. Having a great idea is good and all, but these cards look amazing too. While the featured player is super-glossy and jumps out of the card, the background has a textured and defocused look that is sweet to see. Having the card 'bordered' by silver and gray at a slant just makes these cards even better. These Thanksgiving cards are bang on! I love them! 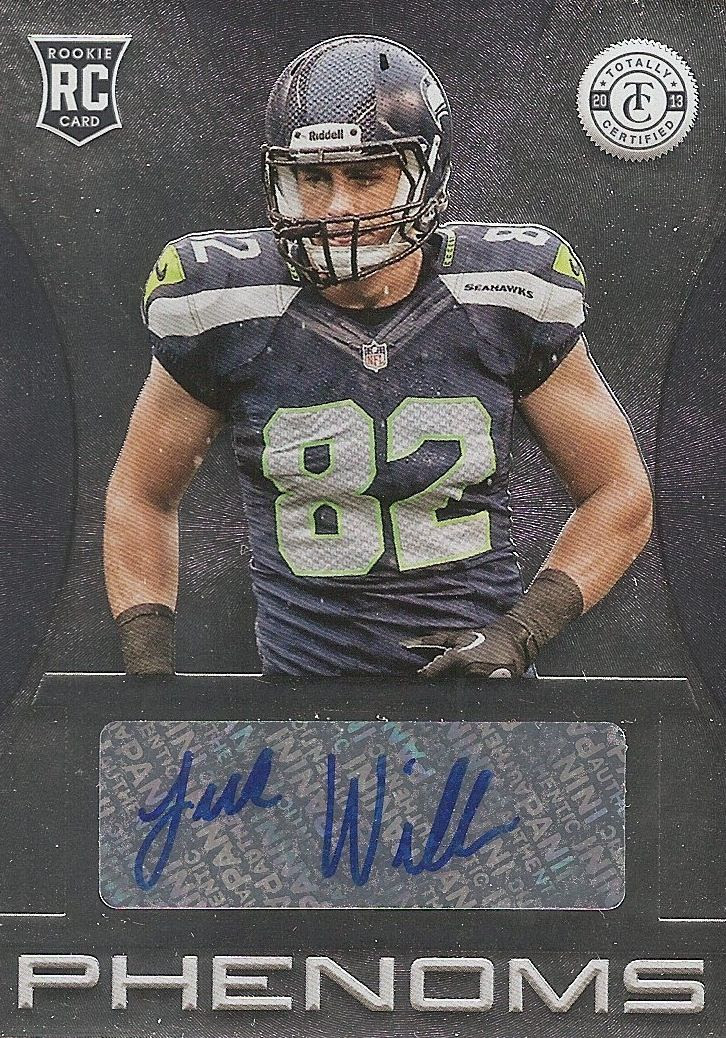 After the Thanksgiving cards come the autographed Freshman Phenoms cards. They occupy cards 151-210 in the main set. These cards carry a similar design to the non-autographed versions. The difference comes in that the bottom border has been raised to include a space for a sticker autograph. This is about as standard as an autograph rookie card can be. 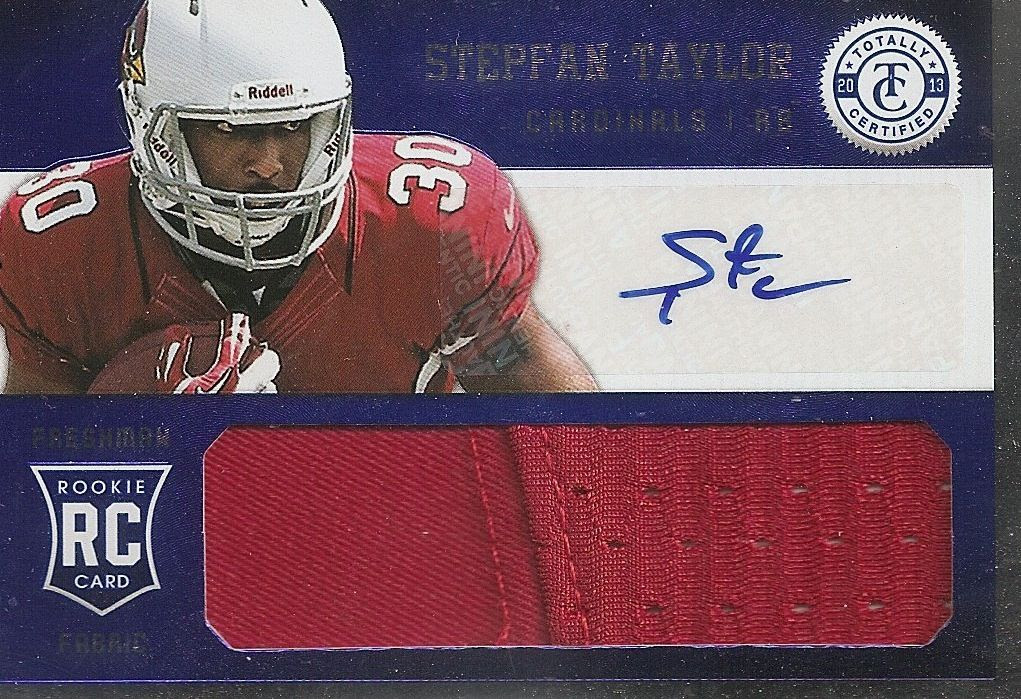 Rounding out the main football set are the Freshman Fabric rookie cards. This 40-card set at the end of Totally Certified is the best look of the bunch. These cards feature both ink and cloth - and a generous portion at that! Like all the other Totally Certified cards, these cards are all-foil, but unlike the standard base cards, these have colored foiling to get these cards to stand out. I complained at the beginning of the base card review that there wasn't enough liveliness in these cards. Well, I found it here with these sleek Freshman Fabric rookie jersey autos. 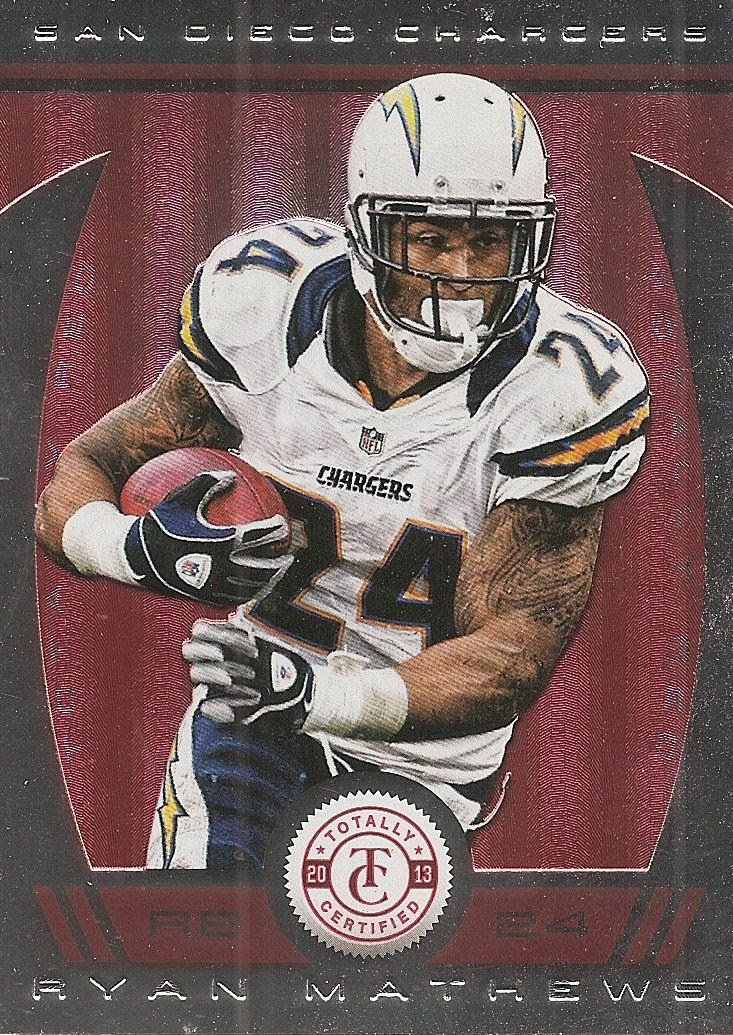 Unfortunately for me, I didn't find any green (/5) or black (/1) parallels in either of the boxes I opened. I did, however, get some red and blues. Totally red and blue parallels are the most common kinds you can get. This totally red card from football was unnumbered, but in basketball the reds are numbered to 99. Blues are typically numbered to 49, and golds to 25. The background color adds some pop to the card's look. I wish the base cards had some color like this to make them more attractive.

The standard jersey design is shared by both products. And both of these jerseys happen to be the Totally Red versions. The football jersey has been numbered to 99, while the basketball one is to 199. There are slight variations in the numberings, but in the end they are all just jersey cards. These jersey cards look nice with the all-foil design, but it's always sad to know that you probably won't be too happy if you got one of these in a $20 pack of Totally Certified. Props for looking good, but sad face for value. 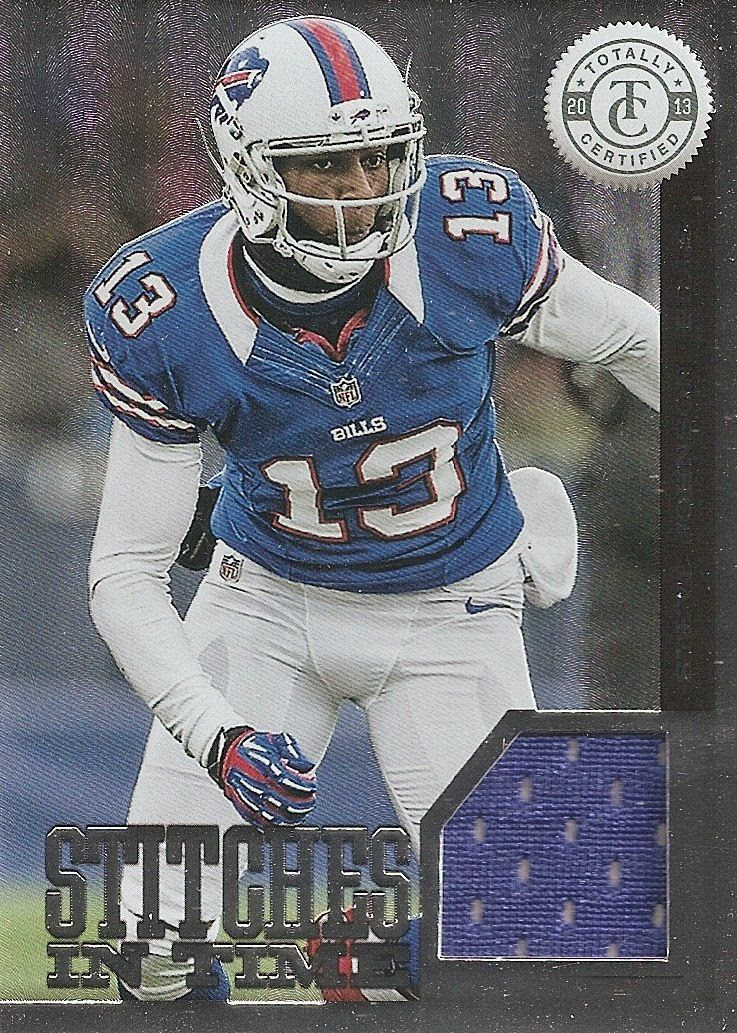 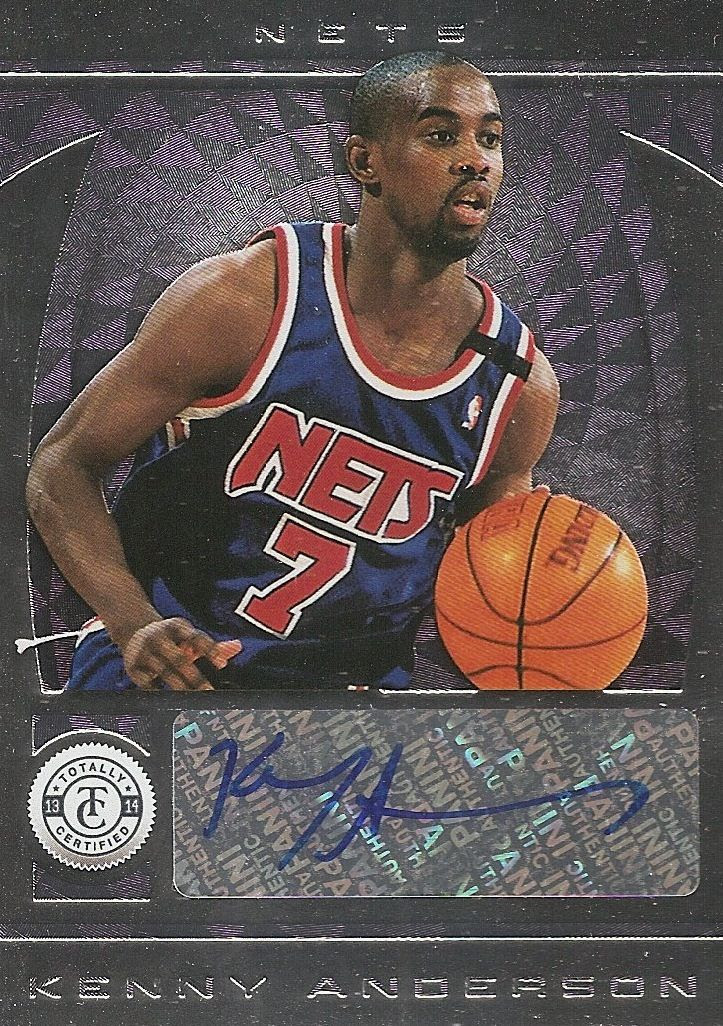 Totally Certified football gave me all rookie signatures, basketball gave me two vet autos and one rookie. My veteran autographs were of Kenny Anderson (shown above) and Lance Thomas. I remember watching Anderson play from back in the day. He was never a superstar player, but he was definitely solid. I'm sure there are fans of his who would enjoy getting his cards, but they aren't of any huge value. These Totally Silver Signatures have a similar look to the base cards, but the uniquely textured background behind the player image gives the card a distinct look. 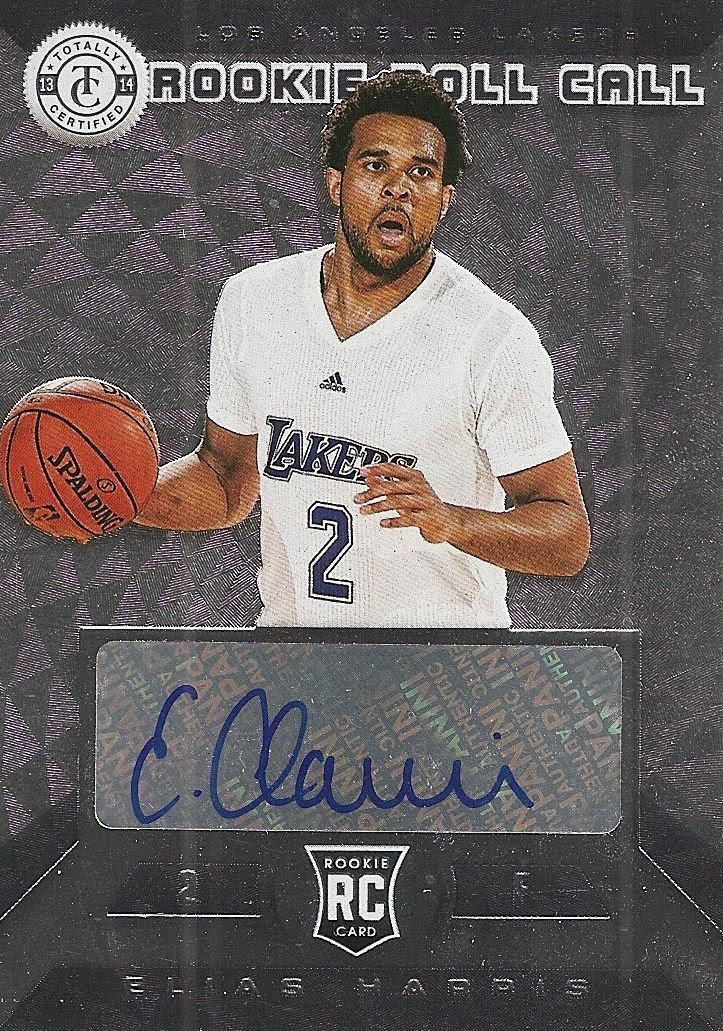 The rookie autograph I received in basketball was Elias Harris. This autograph card is part of the Rookie Roll Call set. Like the Totally Silver Signatures, these card have a unique background pattern. The autograph is centered and prominently raised from the bottom of the card.

What you saw come out of the two different boxes seems to be the standard of what you could expect from a box of either Totally Certified product. In comparing the two in terms of hits, football wins out as it had more interesting cards (counting the hits from the main set in the comparison). The basketball version had three plain jerseys and three thin autographs. It's what you're supposed to get, but it's just wasn't that exciting.

Overall Rating -
Even though the two Totally Certified products share the same name, there are noticeable differences in the products. If I had to choose one product for fun, I'd go with football. There just seems to be a bigger variety of things to find in there. I also love the Thanksgiving cards. Those shouldn't weigh in on whether or not to get a box though as they are just base cards.

If I had to gamble on getting something big, I'd pick the basketball product. Basketball collectors really have a thing for low numbered parallels, so I believe you can score much bigger with a huge hit in basketball as compared to football.

So I guess in the end, I'd say football is the more balance product to buy with nicer cards, where as basketball has a more all-or-nothing feel to it.

Both products will run you about $100 a box. I personally prefer products like Select and 'regular' Certified, but I know there are many (including my friend Chris over at D&P Sportscards in Sacramento) that do like breaking Totally Certified quite a bit.

Hopefully this review helped you make a decision!

Check out my boxes of Totally Certified: