Goodwin Champions is a product that I really enjoy breaking for multiple reasons. For one, it's a product that has a variety of different sports and famous people. It makes for a very interesting break. I love seeing who pops out of the box whenever I open it. The cards are always done nicely. Each card is rendered in an artistic way that showcases the subject in an interesting light. And lastly, I always hope to pull a unique autograph or memorabilia card from these - it's very hard - but it would be awesome to do! 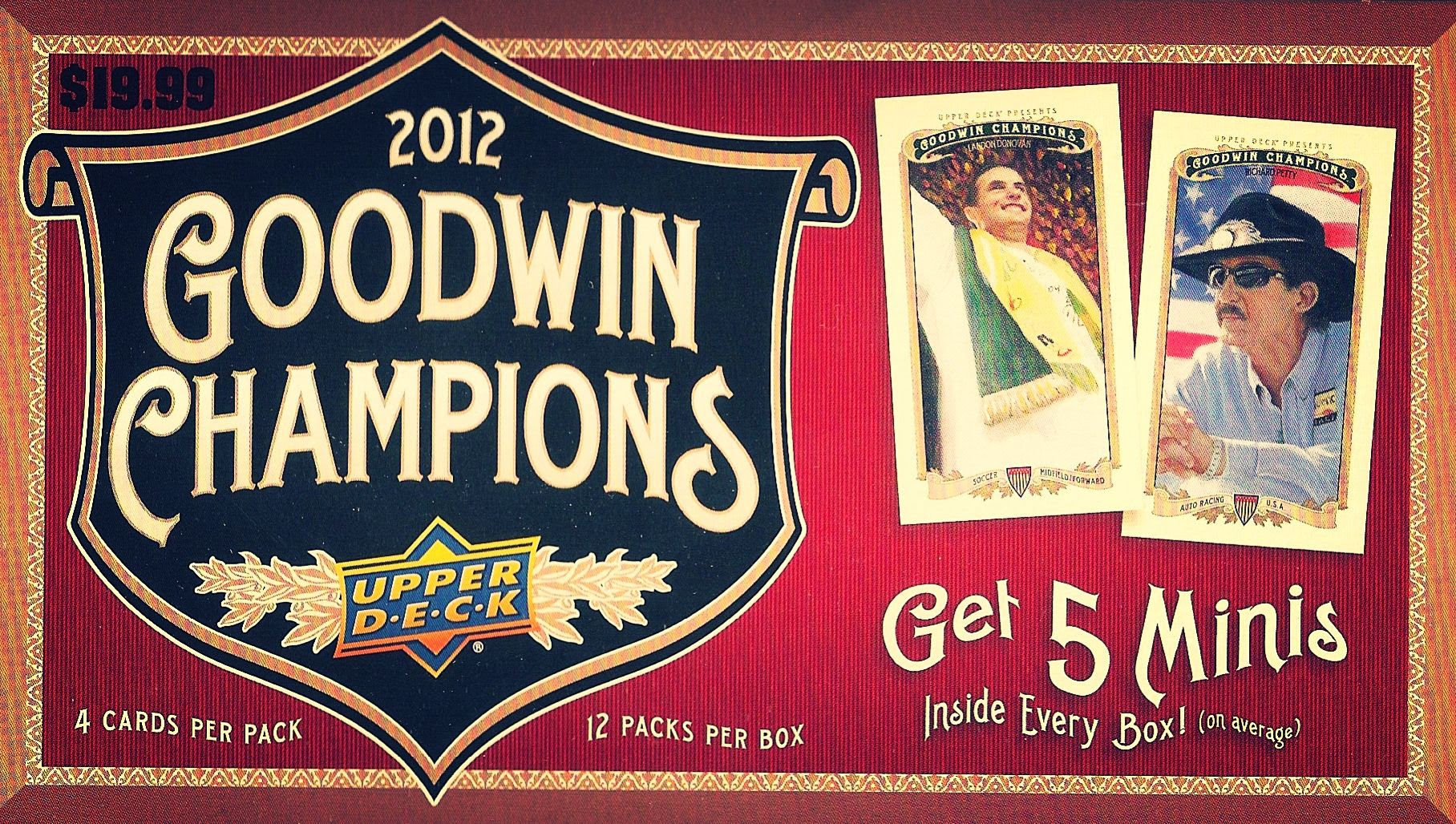 Though I love opening up these Goodwin boxes, it's rare that I can justify getting one at it's original price of twenty dollars. Almost every box of Goodwin Champions will net you just a few mini cards and a glossy machine card. You might as well just give the store your money! Going on eBay, you can probably pick up 5-6 jersey cards of Goodwin for that amount. The only things that might help you get your money back on a full-price blaster is a big name autograph. And we all know that's not an easy pull.

This blaster from dacardworld.com was under seven dollars... and I still think it's a little high, because I know if all I were to get was base and minis, I wouldn't make that purchase. But I'm willing to bite at that price to have a chance at something better. I really think a blaster of this should be more in the five dollar range. That's 25% of it's original MSRP, but to me that's the right number.

Let's cross our fingers and break into this box of 2012 Goodwin Champions:


Review -
So, this box was the standard Goodwin break. There were no hits, just a handful of minis and a glossy Military Machines card. My green mini was of Garret Gomez, a jockey. I'm not a huge horse racing fan, so unfortunately I didn't know who he was. And that can be the problem with a product like Goodwin Champions, there is a definite possibility of getting cards of people you don't know.

I did, however, get Ryne Sandberg and Jack Morris mini cards. I used to collect baseball cards in the 80's, so getting these two was pretty cool. I was a little surprised to see the artist of these cards put Sandberg in an older look. His card is neither here nor there to me. I'm sure there was a specific reason for the way the card is, I'm just not sure what that is.

My Military Machines insert was of the USS Maine. This battleship was famous because it exploded allegedly due to a Spanish mine. Many hands were lost as a result. This insert will join my other Military Machines cards I have gotten while opening up these blasters. 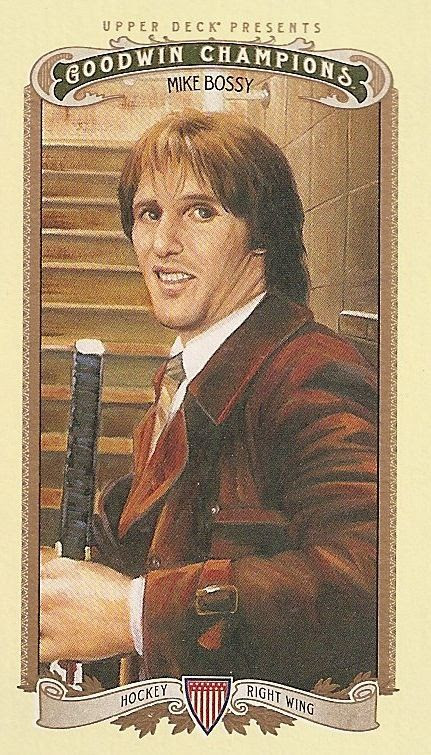 #3 - Mike Bossy Mini Card No. 105
I had to go with a hockey representative! Mike Bossy was a phenomenal hockey player during his NHL days. This is an interesting depiction of Bossy. Perhaps this was a moment after a game he played in. 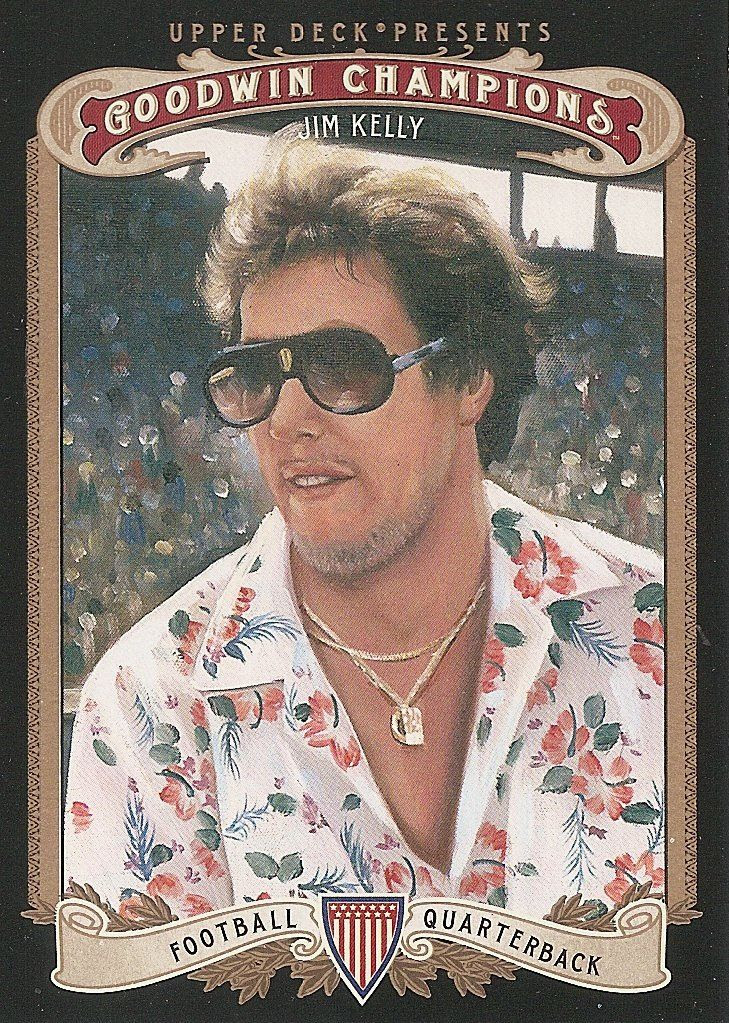 #2 - Jim Kelly Card No. 87
Jim Kelly took the Buffalo Bills to multiple Super Bowls... it's really too bad they didn't win a single one of them! Though he didn't get the job done in terms of an NFL championship, he certainly got the job done with this schweet looking outfit! 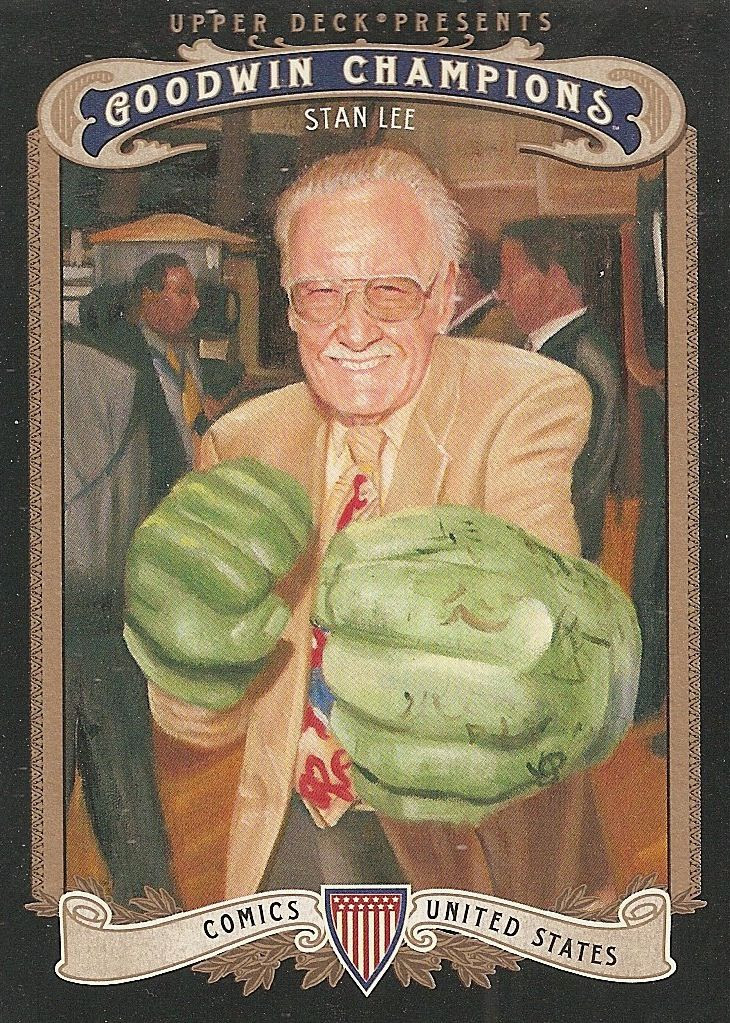 #1 - Stan Lee Card No. 188
Ahhh, Stan Lee, the head honcho of Marvel Comic books! Stan has had a tremendous impact in the pop culture world with his numerous creations. I love this picture of Stan with the oversized Hulk gloves on. What a character!

Overall Value -
I took a chance with seven bucks and it really didn't pay off in terms of long term value. I just got a bunch of cool looking base, minis, and an insert. The only saving grace of this break was the enjoyment I got by looking through the cards. Some products don't even allow for that, I guess! I definitely would be hesitant to recommend buying Goodwin Champions. It's a product that has fun cards, but trying to find value in it is near impossible! Pass on this unless you absolutely want to try some.

Look for a new episode of Retail Review every Sunday!
Posted by luke. at 4:52 PM