Well... I hope you are a big fan of Prizm... 'cause here it comes again! This time dressed up with NFL football players. It hasn't been too often that we've seen a company produce the same line of cards for all the major sports... but since Panini produces cards for all the major sports (licensed or not), it has the ability to do just that! We've seen this version of Prizm very recently in hockey and baseball. Is it any different from those releases? Let's see! 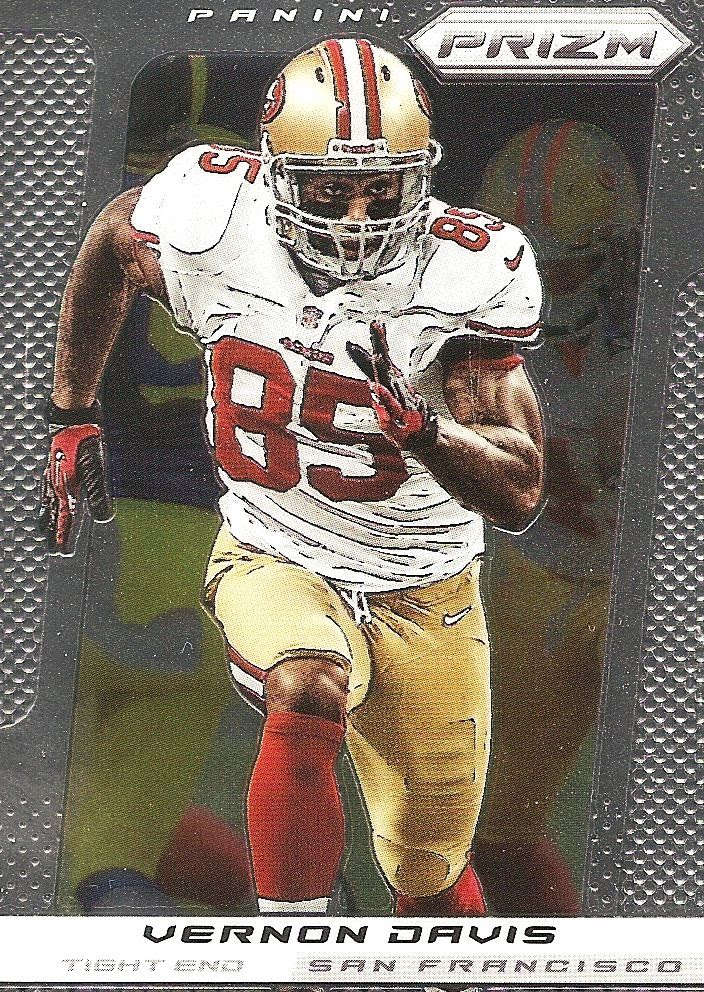 Base Card Design -
Not much new can be said about this Prizm design. As I've mentioned before, these cards are slick and modern. Collectors who enjoy a little flash and a contemporary card design will probably enjoy these cards quite a bit. Not only are these cards sleek, the etching on the card gives it a three dimensional, textured look. Everything from the modern graphics to the font Panini uses makes these base cards great modern day cards to collect. Worth noting for this set is that Panini has a full NFL license, so they can depict the players with their official team logos, a luxury Panini didn't have with baseball. If you'd like a little more insight on the card design, click on my review of Prizm Hockey here. 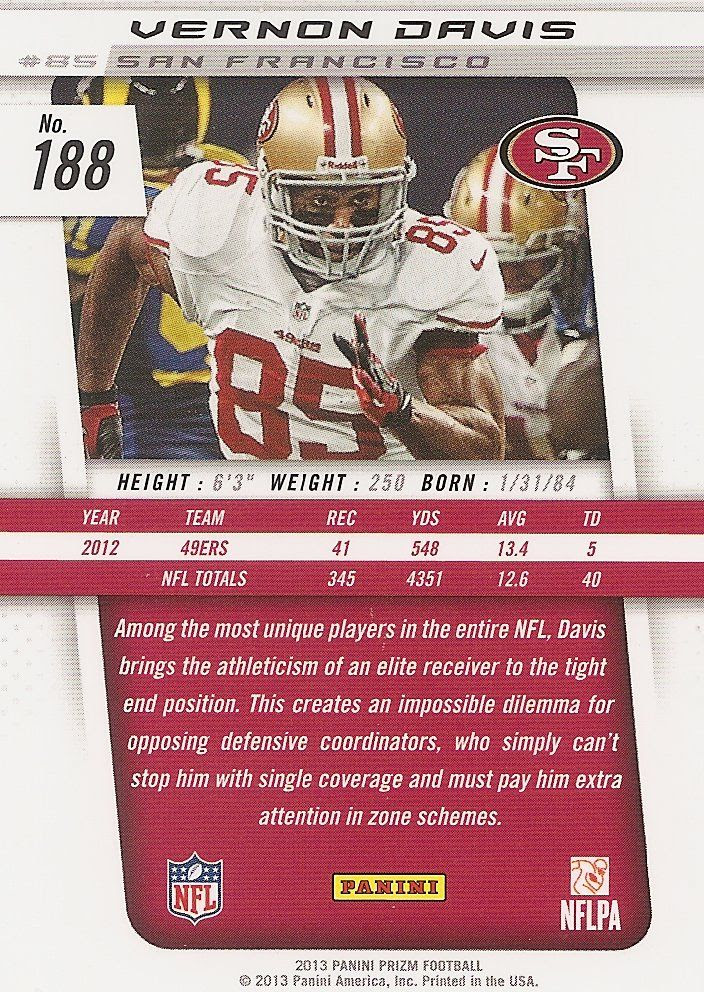 The back of the Prizm base cards also mirror the previously released hockey and baseball Prizm cards. These card backs have a pleasing design, but I feel that there was a bit too much white space bordering the card. 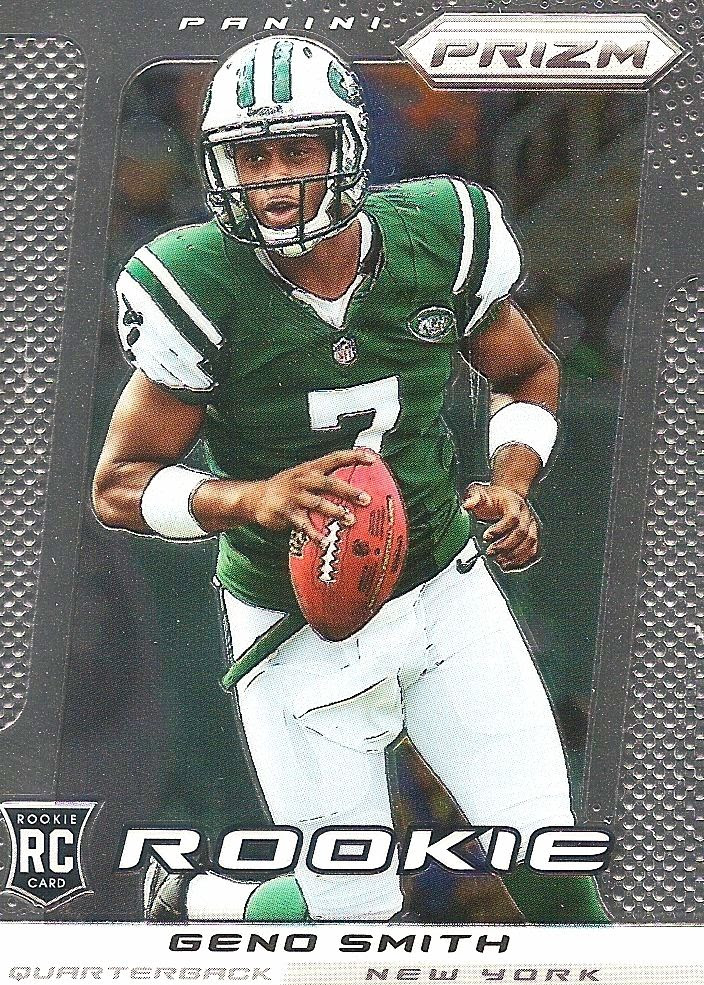 The Prizm rookie card design also carries over. I guess the great thing about releasing the same product over and over through the different sports is the ability to recycle and reuse designs. Is this Panini's way of going green? Well... I'm not sure about that... but I'm sure they saved a lot of money in the design department! Each pack of Prizm will contain one base rookie card.

Inserts/Game-Used/Autos -
Collectors can expect to find two autographs and a slew of inserts per box of Prizm. The autograph content in Prizm hasn't been the most inspiring aspect of the product, but the chance to get one should entice hit collectors to it. The popular parallel cards should be a big draw for football fans if interest in them from other sports are any indication. 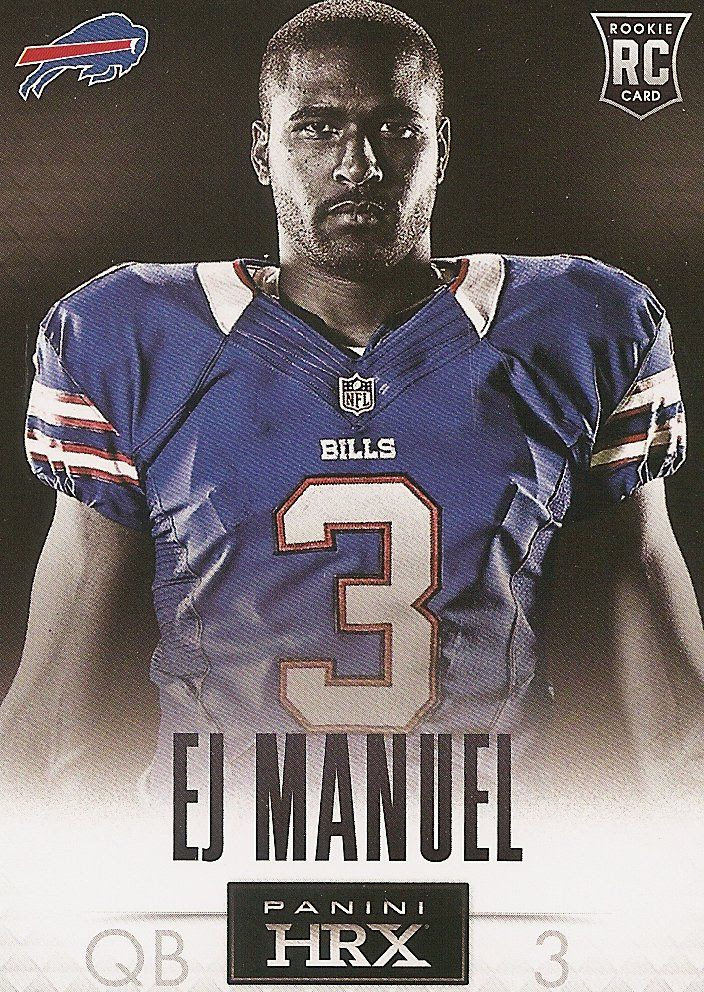 Different than in any of the other Prizm releases are these Panini HRX rookie non-foil/chrome cards. These come one per pack and add a very different element to Prizm football. At first I thought these might have been advertisement cards, but they really aren't. Each HRX comes with a code you can scan and unlock for exclusive video content of the player. It's a neat idea to have a card provide even more content than it can on it's physical 'body'. These cards break the barrier of the cardboard. Though they do something that almost no other card can do, I don't see them being huge value cards as they are easy pulls. But no matter, I think it's an innovative idea to incorporate this type of extra content into cards - definitely unique! 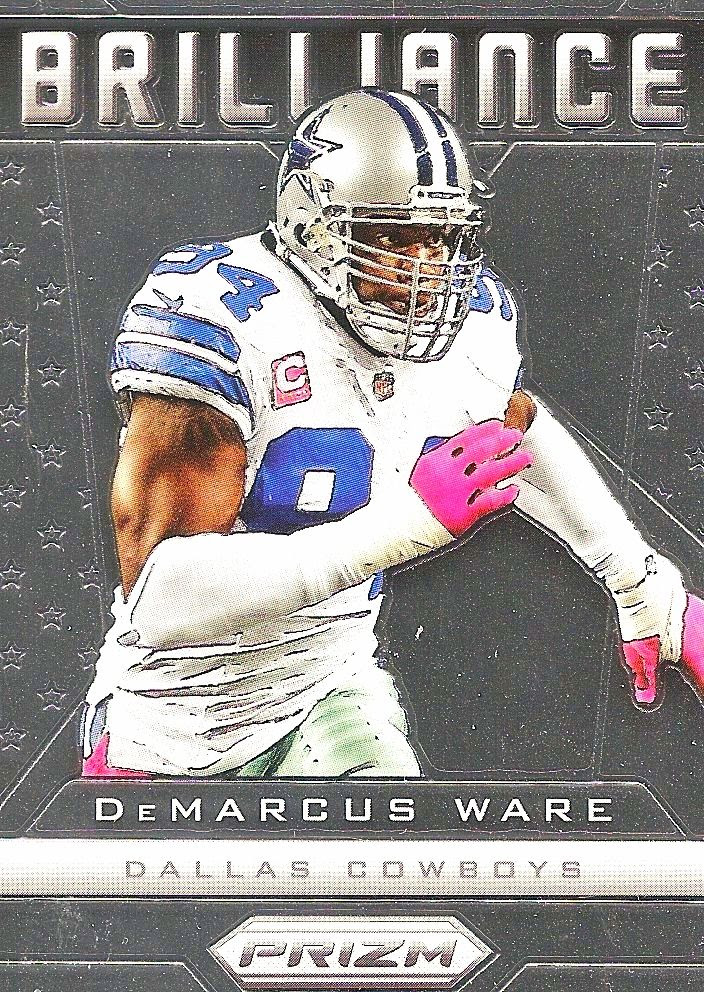 Sneaky, sneaky! This Brilliance insert card shares the same exact design as the Pivotal Players design in Prizm Hockey, it's just been renamed. I am not a huge fan of this particular insert design, and I wish they didn't bring it back for football. The 'spotlight' (I'm guessing that's what's in the background) graphic is just too flat. It makes the card look a bit too empty. Part of what makes the Prizm cards look nice are all the little extra etches within the foil... and these Brilliance inserts just don't have that. 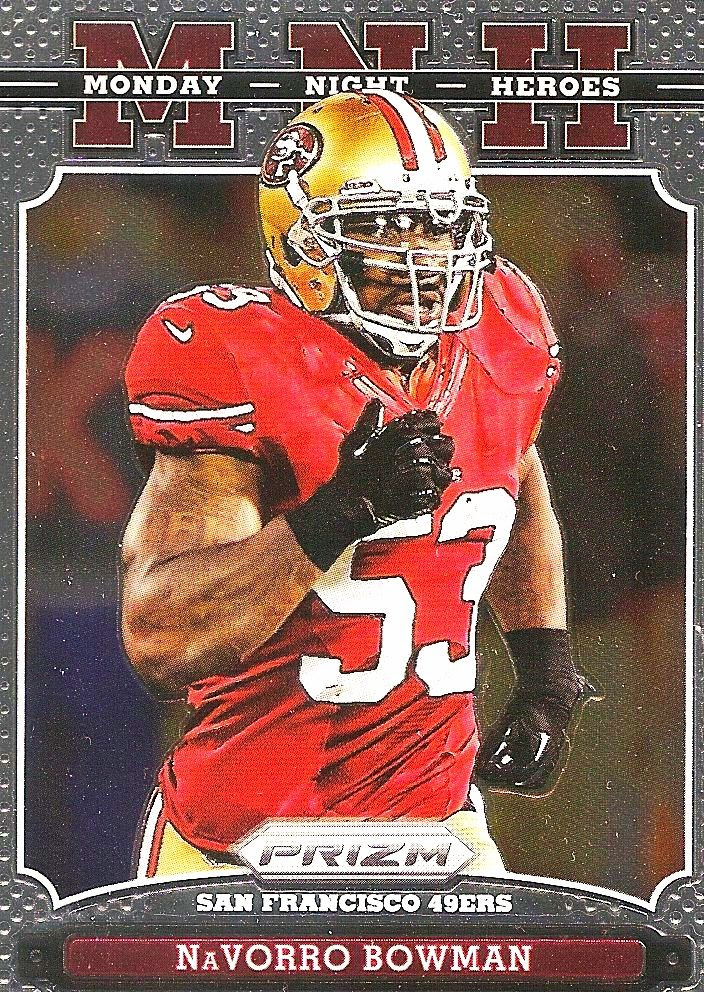 One of the standard inserts sets that I do like is the Monday Night Heroes set. These cards are definitely unique to football as they celebrate players who have done well during Monday Night Football. The cards have a NFL-only theme, and the the card design is a fresh one for Prizm. The back of the card specifically talks about a Monday night game in which the featured player did particularly well. 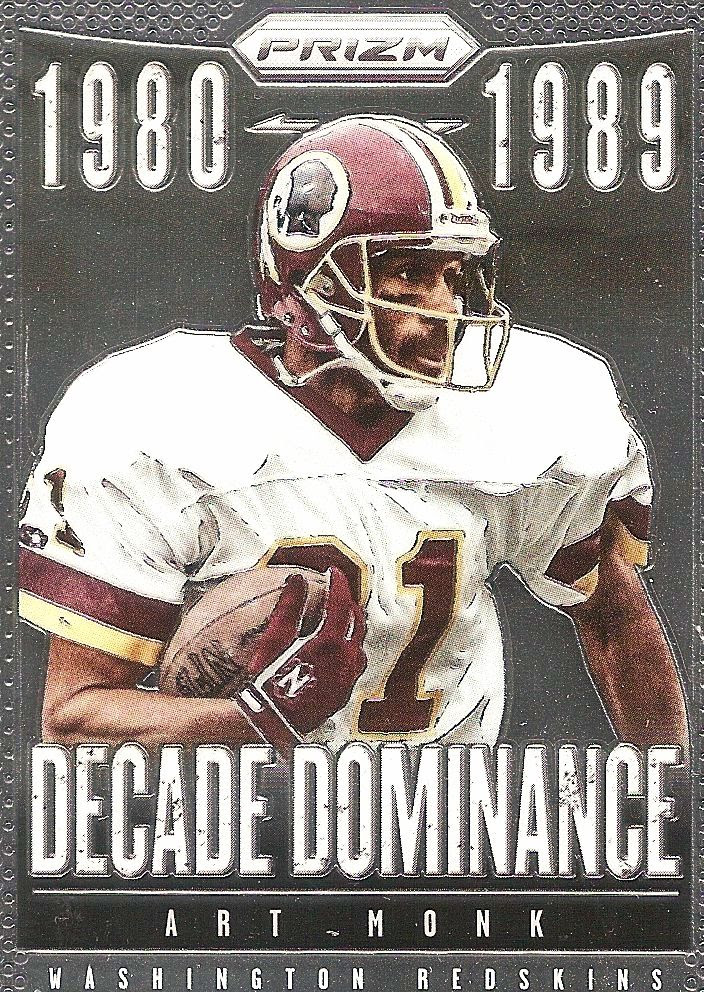 The Decade Dominance insert set is also done well. One of my favorite things to do is combine the old with the new... and with these cards, Panini has combined great older looking images with the new slick foil look. The result is stunning, particularly since the player image is quite large on the card. This insert set is a great way to highlight the players of yesteryear in a fun and cool way. 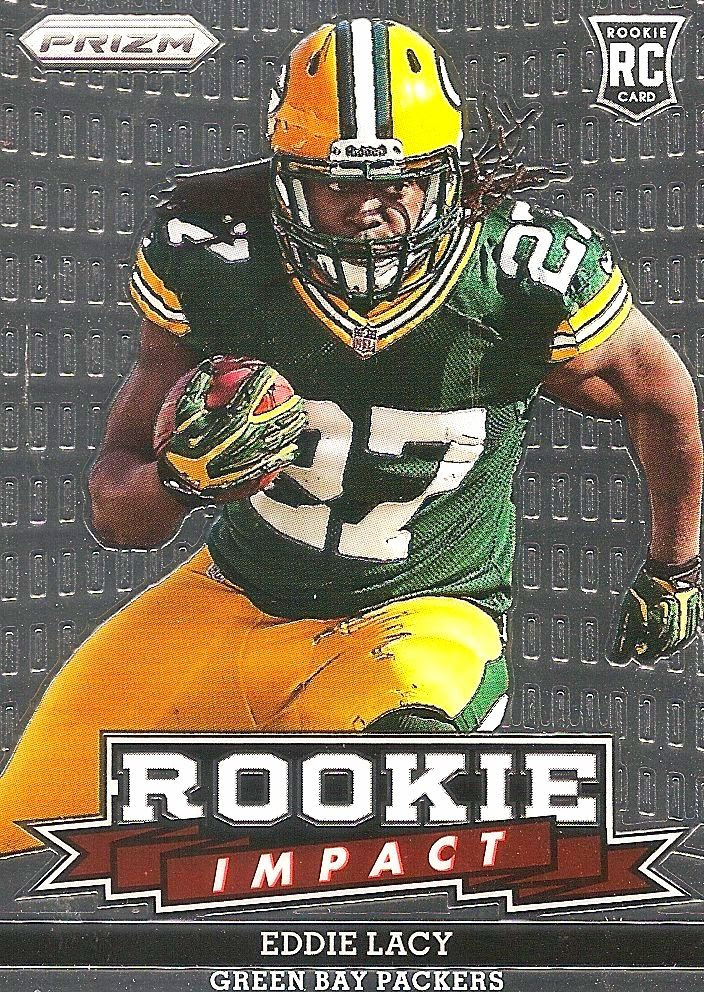 Rookie Impact cards highlight the rookie crop from this year. The hockey version of this set was called Initial Impressions. They share the same design and look. I like the textured background of these cards, but it's too bad this year's group of rookies isn't as strong as last year's group. The quality of a rookie crop always affects how popular a particular set is. 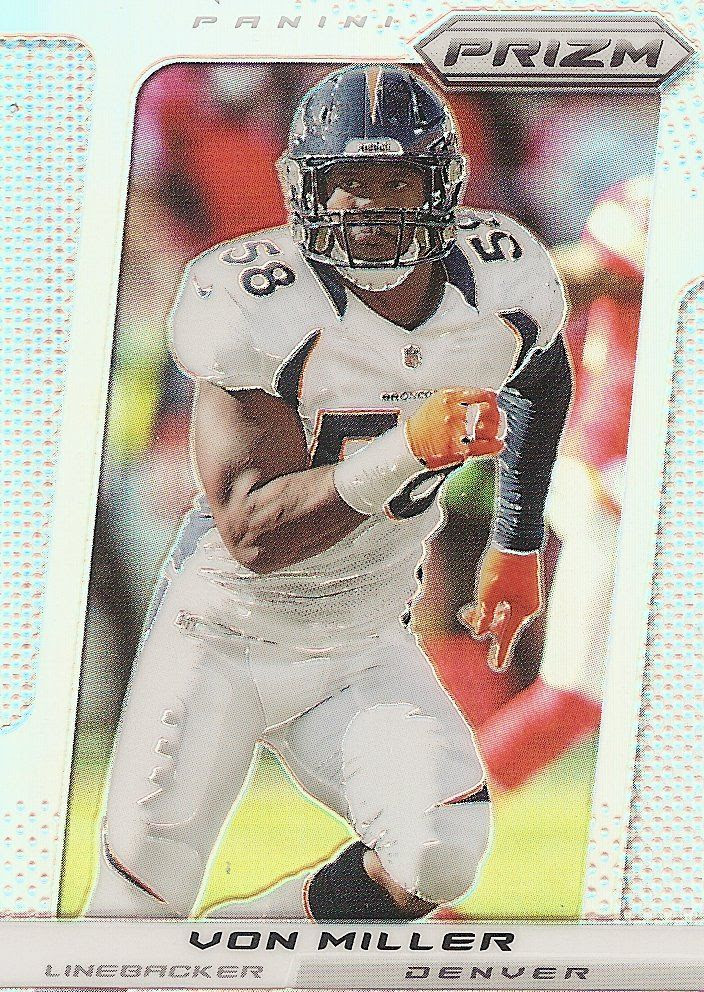 The Prizm Prizm cards have been inserted into boxes once again. And again, I believe these will be the main draw of the the Prizm brand. The rainbow shine looks spectacular, and the cards scan quite well. I received two Prizm Prizm cards in my box. This Von Miller is a base parallel, my other was a Luke Kuechly Brilliance insert Prizm. Surprisingly, I didn't get any numbered parallels in my box. And come to think about, no card in this box had serial numbering. 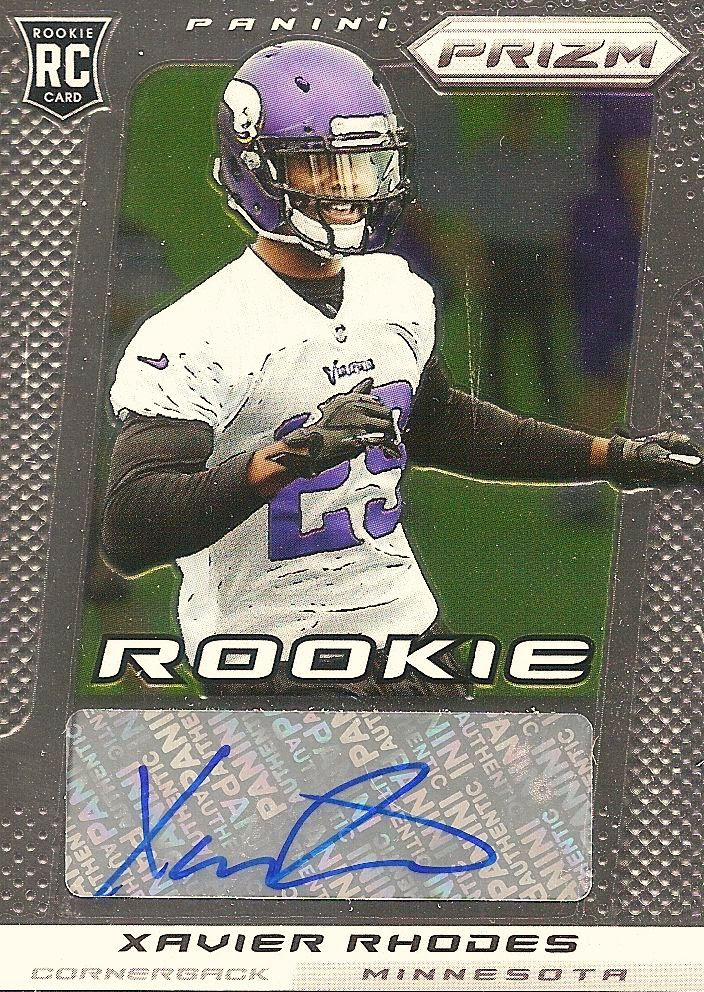 The box states that there are 2 autographs to be found, however, I received three! Well, actually, I received ONE... the other two were redemptions. Since the statement was for two, getting the two redemptions isn't so bad. I consider myself lucky with this box as I did get three cards that feature ink. My only non-redemption card was of rookie Xavier Rhodes. It features a sticker autograph on a base card looking design. These autographs aren't the prettiest cards you can find, but they are still autographs, and collectors will always enjoy finding them.

Though I was able to find three autographs in this box, Prizm Football still has much more to offer than what you saw me pull, but if you've tried Prizm from any of the other sports it has already been released in, you'll have a good idea of what can come out.

Overall Rating -
Ever heard of the expression, 'once you seen one, you've seen them all?' Well, that kind of applies here with Prizm Football. This is definitely a solid product, but seeing so many times can get a bit tiring. If you're a one sport collector, and this is the first time you're getting the chance at it, I think it could be pretty exciting and new.

Panini Prizm is a very good mid-range product that gives collectors a few hits, insert cards, and some rare parallel cards to chase down.

Even though I have already stated that I feel it's a bit repetitive, Panini's ability to release a brand in all the sports is pretty unique. I remember this happening more when I collected cards in the 90's. There would be a set, and the design would carry over through all the sports. I could be cool in terms of continuity. And boy, if you'r a multi-sport fan that loves Prizm, it's like a dream come true!

All-in-all, I would have to say that Prizm is a product worth giving a shot. Be on the look out for low numbered parallel cards. They should be hot!

Check out my break of 2013 Prizm Football: