It's been a good long while since the last Series 1 and 2 Upper Deck product has been released as there was no Series 2 last season. Well, the wait is over and here it is! UD1 is BACK, and it's coming in strong with the much touted double rookie class. Upper Deck Series 1 is probably the most universally collected hockey card product out there. I'm sure collectors are excited to break into their boxes of it s it releases today. Let's take a look at what my box gives me! 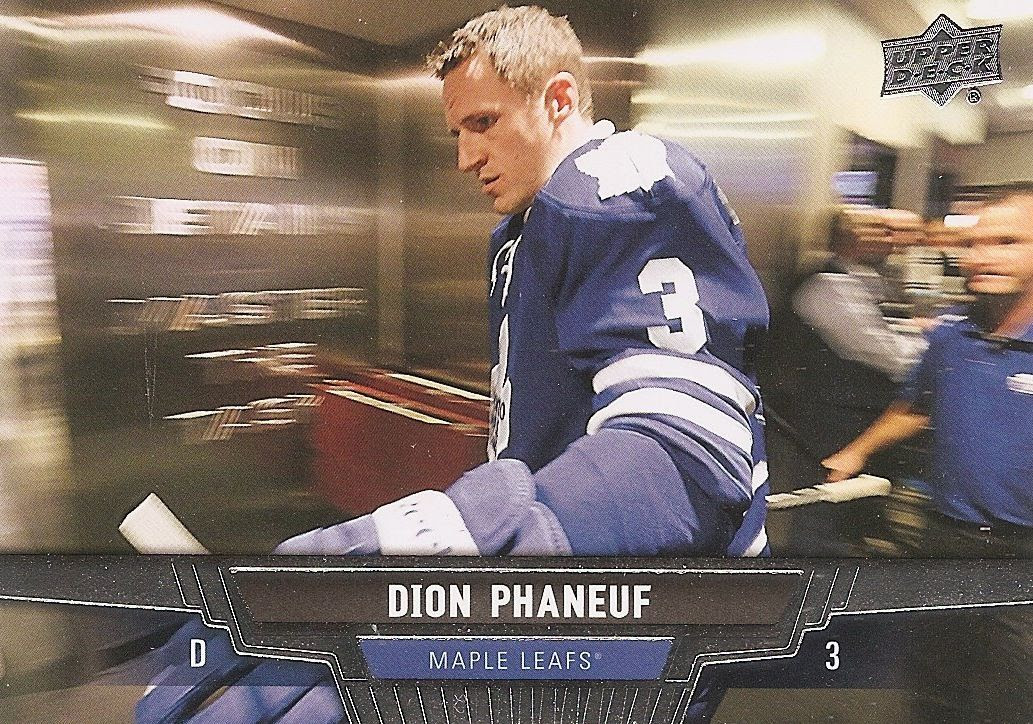 Base Card Design -
As you know already, there are no shortage of amazing photographs in Upper Deck Series 1. The base set of Upper Deck cares is a fantastic set to collect year after year if you want a yearbook of great NHL memories and moments. I would buy UD1 simply for their photograph selection. It's just that good. That being said, I am not as big of a fan of the graphical design elements this year. Upper Deck had been moving towards more minimalist, yet gracefully modern designs these past few years. These base cards are a bit heavy handed to me - especially the huge spans of foil along the bottom portion of the card. I would have preferred less foil in a more subtle design scheme. 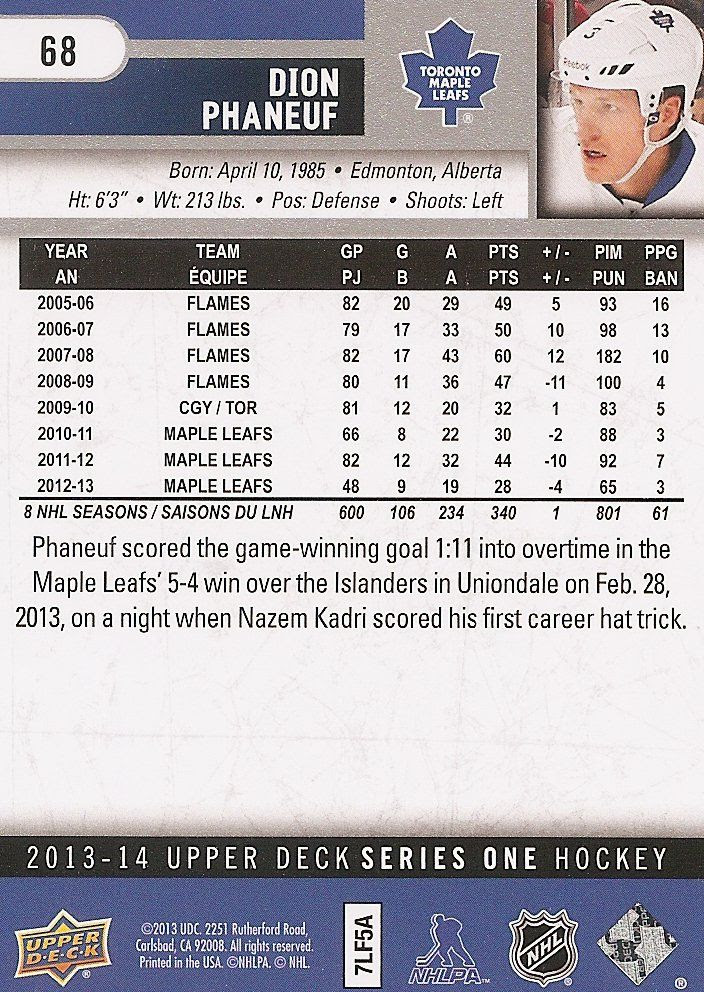 The card backs are of the usual Upper Deck Series 1 design type. The backs are clean, yet feature touches of silver ink and full color photography. There is enough room on the back for a long career statistical display. I appreciate the fact that Upper Deck has included not only the playing numbers for the player, but also have a little bit information about them in written form. 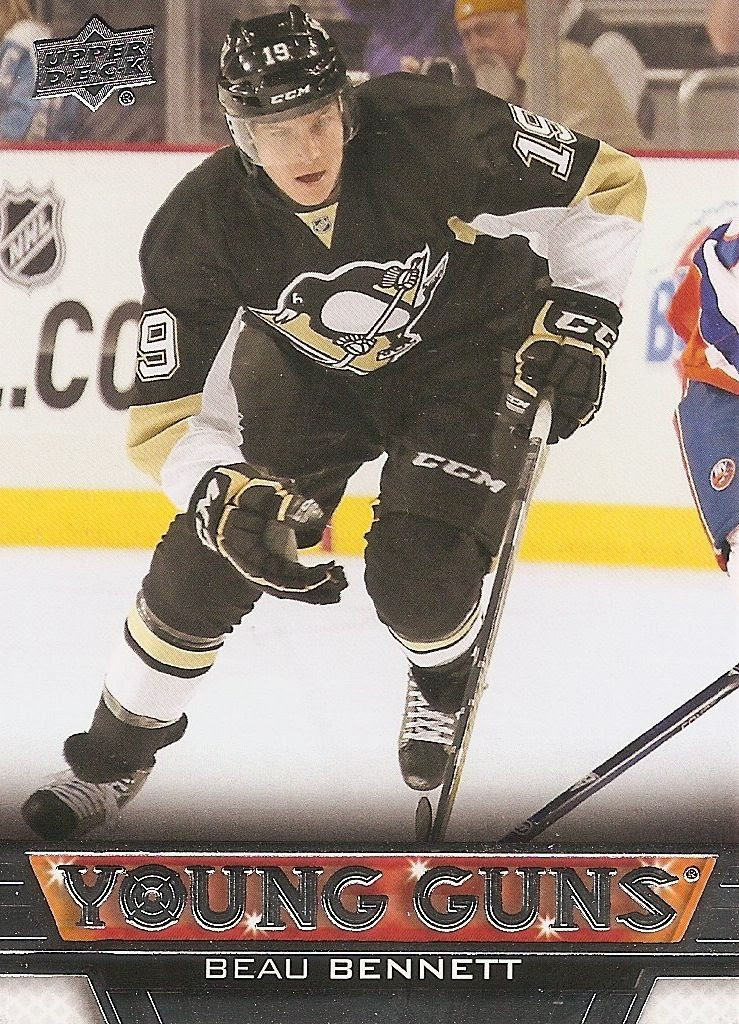 The Young Guns this year, for me, are not good looking cards. I saw them in the previews and didn't like them, but I thought I'd wait to see them released before giving my final judgement. And it hasn't changed. Like the base card design, I feel that the Young Guns look a bit dated. The cool modern-ness of the Young Guns isn't there. The foil is just too much in one place all-together, and the stars and the actual Young Guns logo are just too cheeky as well. I've heard other collectors say they like the design quite a bit... well... agree to disagree on this one then! The back of the Young Gun cards are very cool though. The backs feature a bright orange and red motif that is a very unusual color choice for hockey cards. 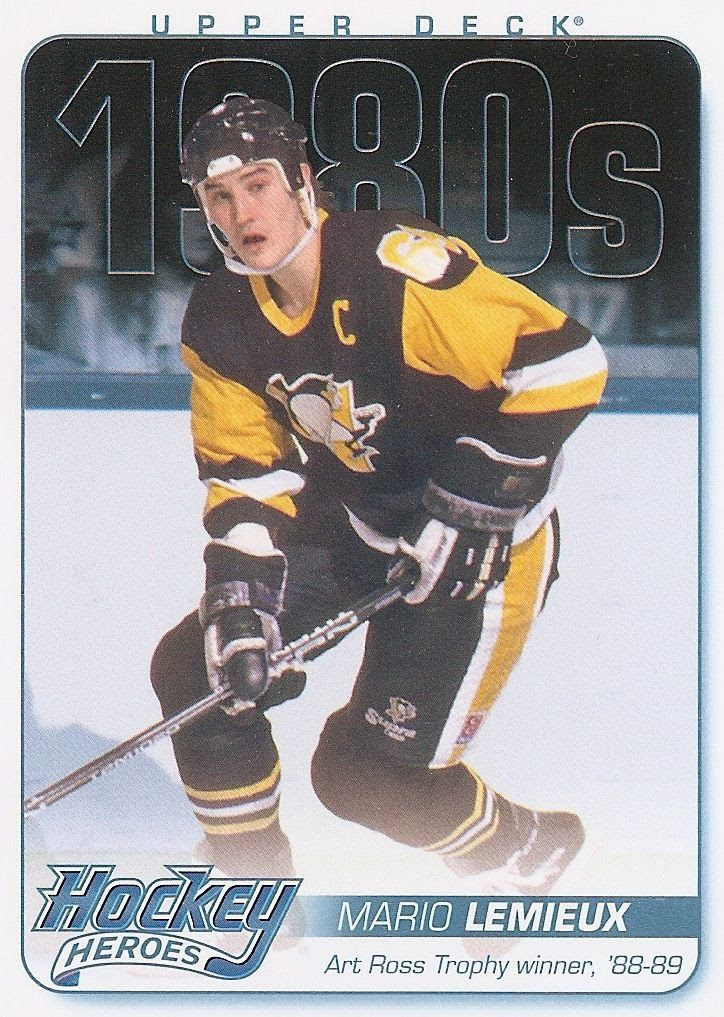 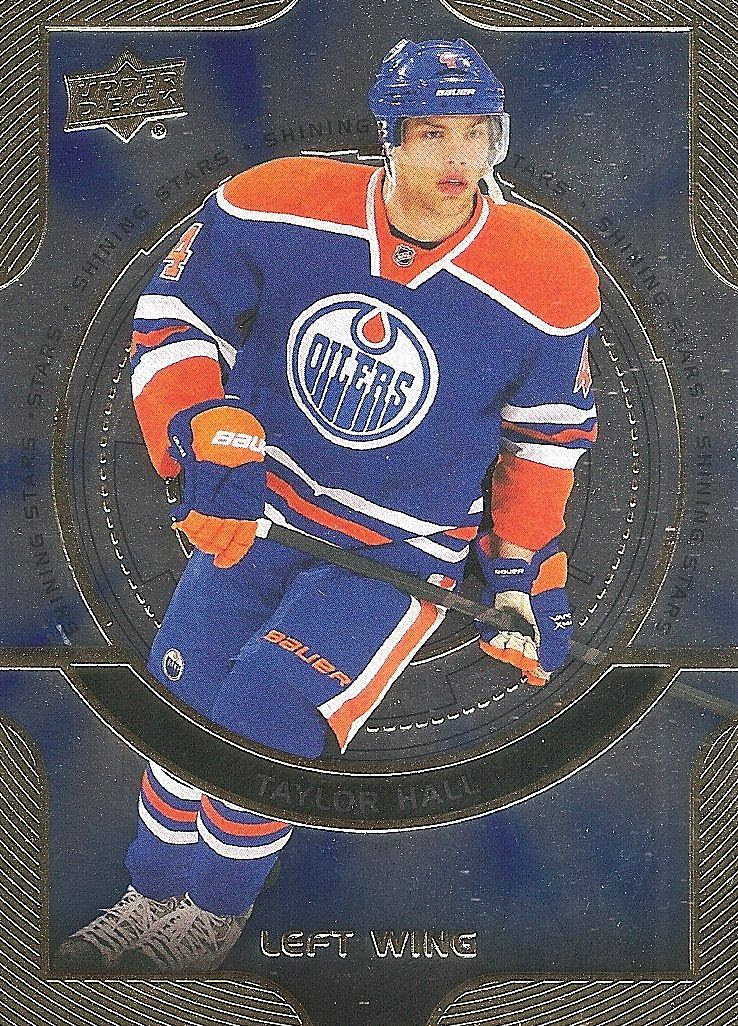 New this year are these Shining Stars inserts. It's definitely a different looking insert compared to the others in the set as it is all foiled-out. Not only does it have the standard backing foil, but these cards have etched foil corners too. The corners are Artifacts-esque. The foil cards look nice, but I can't see my self getting too excited about them. Parallel versions of these cards exist, but good luck snagging one as the toughest parallel comes in at 1:1440! 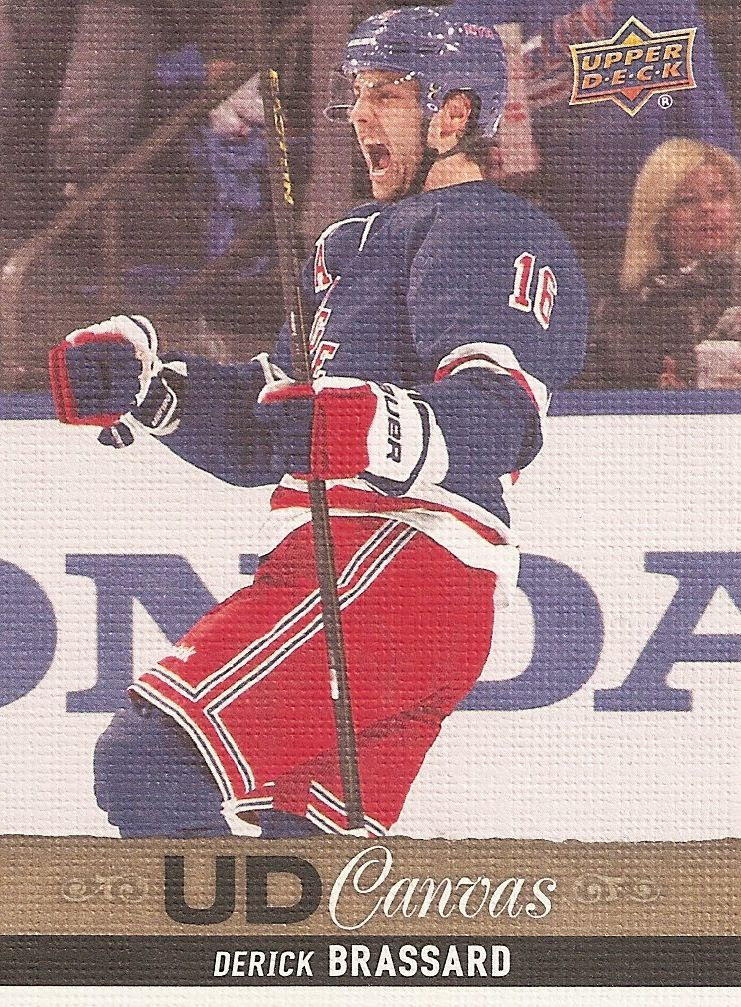 Canvas cards make their return for yet another go-around. The Canvas set is a great addition to the base set as they contain even more unique photographs. I did, however, feel that this years Canvas card felt a little 'cheaper' than those of years past. The cards in my box looked a bit faded to me. I'm not sure if that was by design or not... but the colors just don't pop out as much as I would like them to. Collectors can find both standard Canvas cards as well as Young Gun Canvas cards. 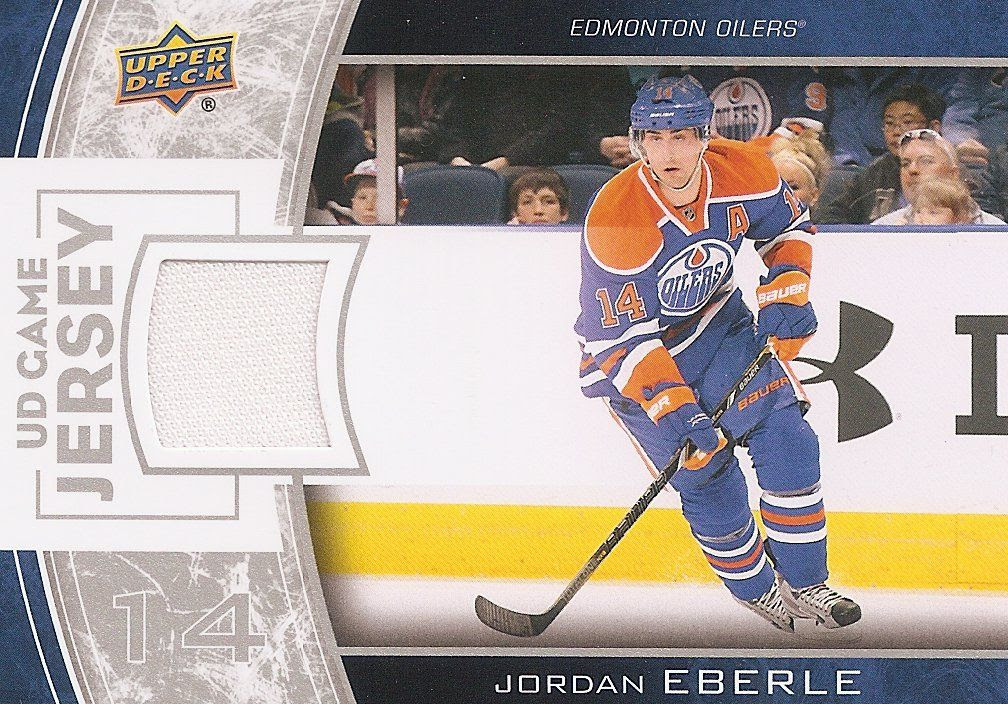 The Upper Deck Game Jersey cards have returned and look great this year. The cards are very vibrant and inviting. I was surprised to pull a couple of bigger names from my box - both Jordan Eberle and Dominik Hasek came out! Usually you get a couple of lower level players out of these boxes. From what I've seen, there are some pretty big names to find jerseys of this year. 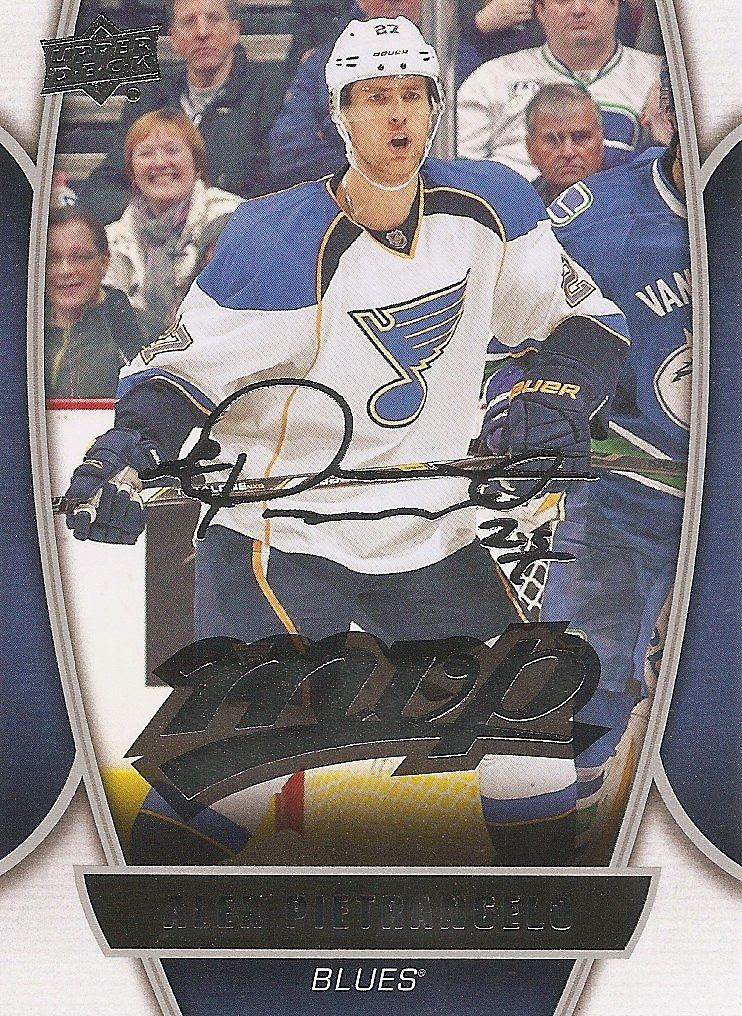 MVP is back as well in Upper Deck Series 1. This discontinued product continues to live on as an insert set. Getting these MVP base cards isn't exciting for me. Are there really huge MVP fans out there that want to continue collecting that set? I would rather Upper Deck come out with a new insert set to put in... or bring back the All World Team cards! 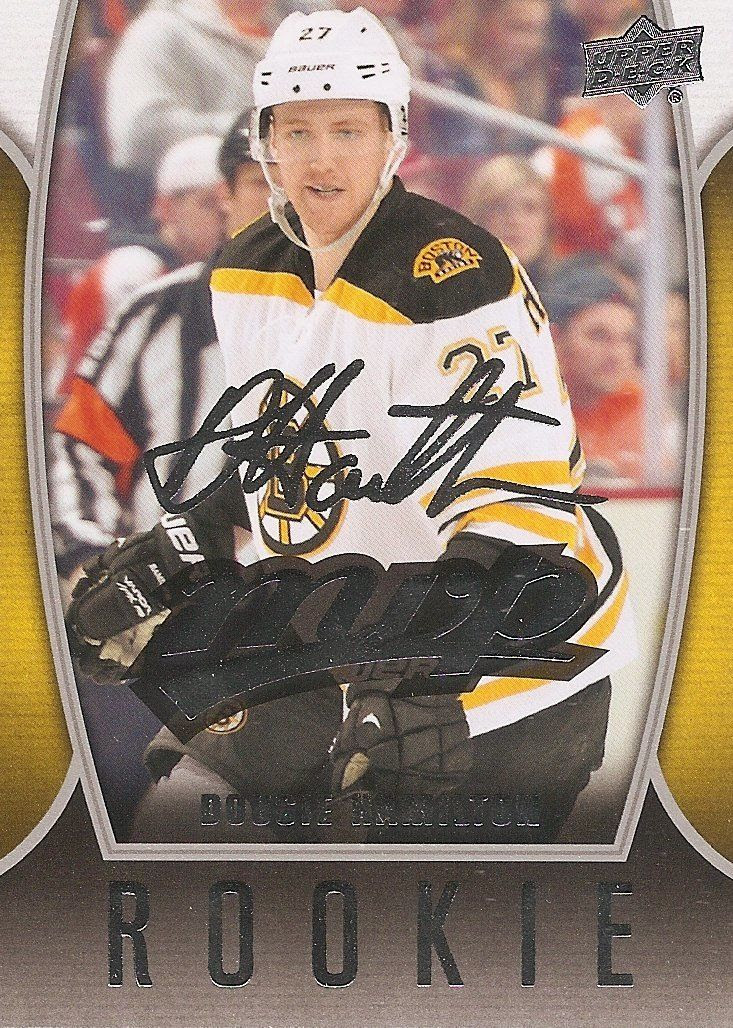 MVP Rookie cards come about one per box. The design on these closely resembles the MVP base insert. There was a design a couple of years ago that I thought was fabulous for the MVP rookie. I wish Upper Deck did the same where the MVP rookie cards were dramatically different. The excitement just isn't there with these.

My box of Upper Deck Series 1 was very standard. I didn't pull an autograph or acetate card. There are plenty of fun and rare cards to still find in UD1. I didn't get them, so it's up to you!

Overall Rating -
Can you ever really go wrong with Upper Deck Series 1? The answer is no. Upper Deck Series 1 again gives hockey fans a great product with desirable rookie cards. There are a lot of super Young Guns to chase down in this set. The price of UD1 is always accessible to all collectors, so it isn't difficult to get some for yourself. It is a product that every hockey collector should be buying!

Though this is a again a wonderful hockey product, I personally didn't like the design aspects of these cards as much as I have in the past. I felt that the design of the cards took a step back from the great strides UD has made in coming up with super sleek and modern cards. Still though, the pictures more than make up for it!

Upper Deck Series One is out... just go and get it already!

Check out my box of UD1 opened at D&P Cards in Sacramento, Ca: