It's NBA Hoops! Hoops has been around for a long time. It's inaugural release in 1989 was a massive success that really brought basketball cards to the forefront. Though Hoops has always been a lower-end brand, it's history has made it a favorite among collectors. The low price point of Hoops makes it easy for younger collectors to obtain. Hoops has always had fun graphics and a youthful design. I'm sure Panini will continue that tradition with this newest version of it. 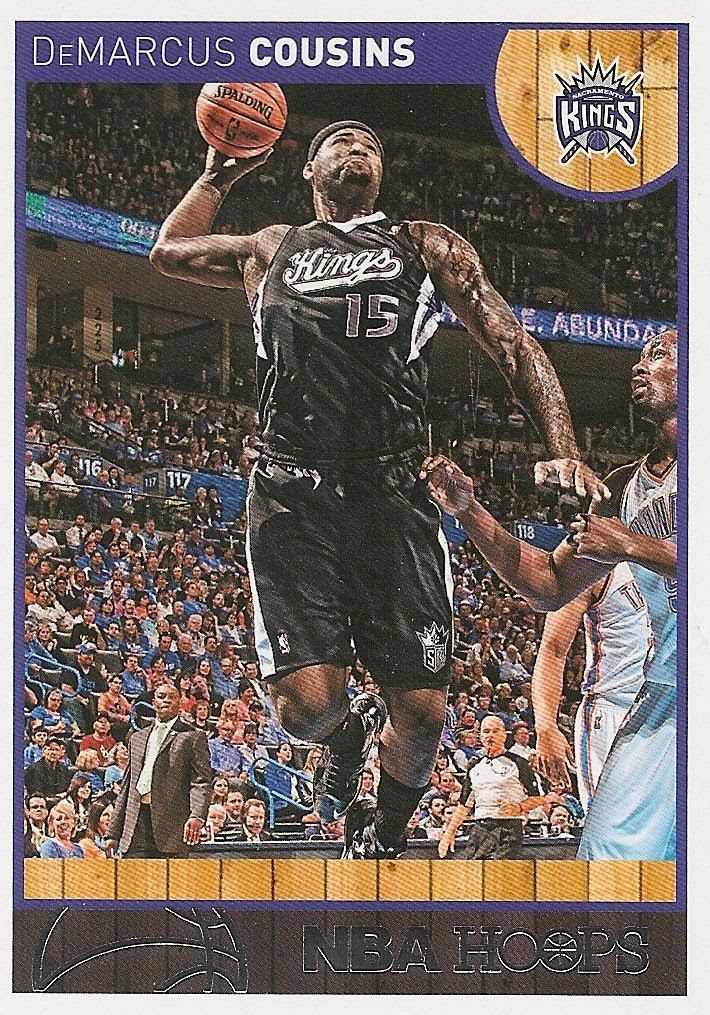 Base Card Design -
The Hoops base card has many pleasing aspects to it. What first draws my attention, though, is the hardwood floor accents within the card design. The hardwood floor of the court is an iconic part of basketball, and I love that it is represented on these base cards. The use of the floor image gives the cards a natural look, and brightens up the overall feel of the card front. The logos and fonts used on these base cards also look clean and modern. Having the NBA Hoops brand name in silver foil adds a touch of premium feel to these cards. The only thing that detracts from the look of these cards is the white border. Often, white borders on cards signifies a lower-end product. The cards would have been so much better if they had just enlarged the card to fill the entire space. Just get rid of the border! It detracts from the aesthetics too much in my opinion. 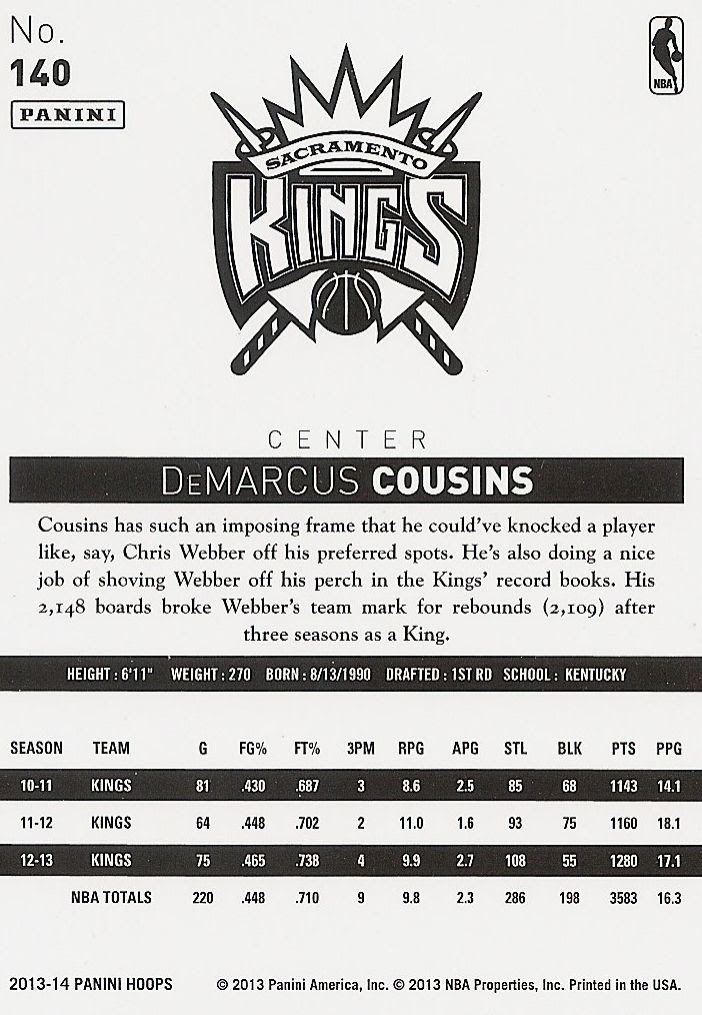 The card back design is quite honestly a big let down. As colorful and as eye-popping the fronts are, the back of the card is boring. These cards were used in Score hockey, and have now made their way here to Hoops. The stark, boring back absolutely doesn't look like it should be on the backs of the Hoops base cards. I was actually very shocked when I turned the Hoops card around and saw this. Ugh, these backs are a 'NO!' 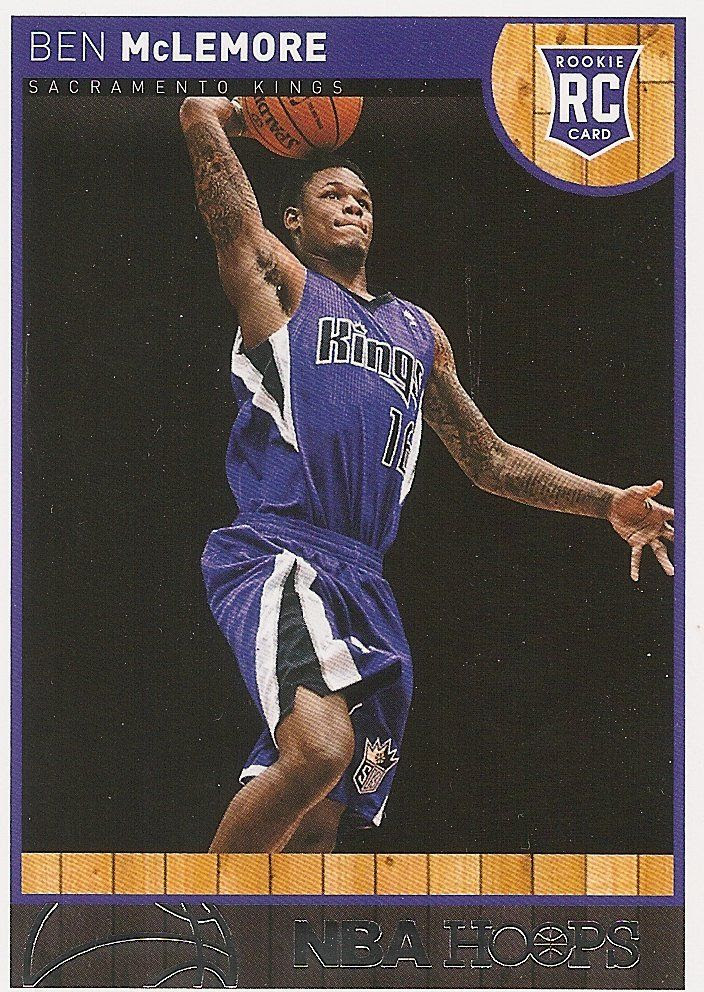 Rookie cards in Hoops simply replace the team logo in the upper right hand corner with the Panini Rookie Card logo. It's interesting to see some of the photos Panini chose for the cards as they were made before the season had begun. The McLemore rookie card above is actually kind of neat with the blacked-out background. Changing the photo background is definitely is a way to signify that this card is different without adding many changes to the base card design.

Inserts/Game-Used/Autos -
I opened up a jumbo box of NBA Hoops. It came with ten huge bricks of packs. The box says to look for two autographs and one memorabilia card. Aside from the hits found, packs contain a great deal of inserts and parallel cards to sift though as you open them up. 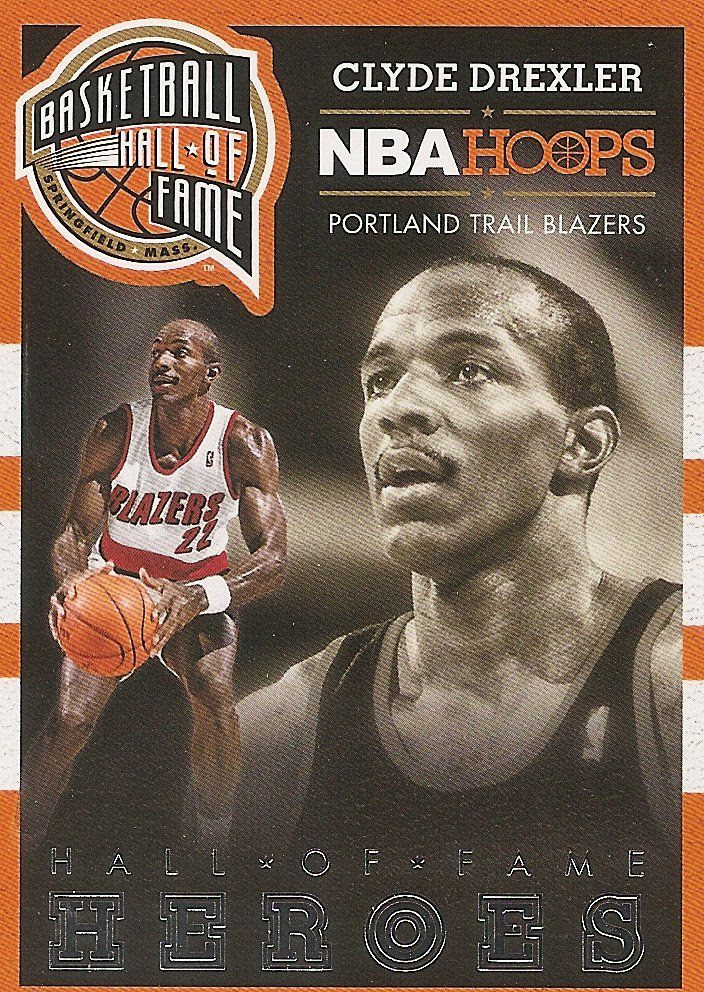 There are a ton of insert cards to find when opening up these Hoops jumbo packs. This Hall of Fame Heroes insert is one of my favorites. First of all, I'm all into retro-hoops cards, so this is right up my alley. The design of these cards invoke a great sense of the fun that cards used to have. The orange border with the white lines is really old school. Although the design scheme may be retro, the feel is definitely modern as the card is very glossy, has some nice photography, and features a splash of foil lettering on the logo. 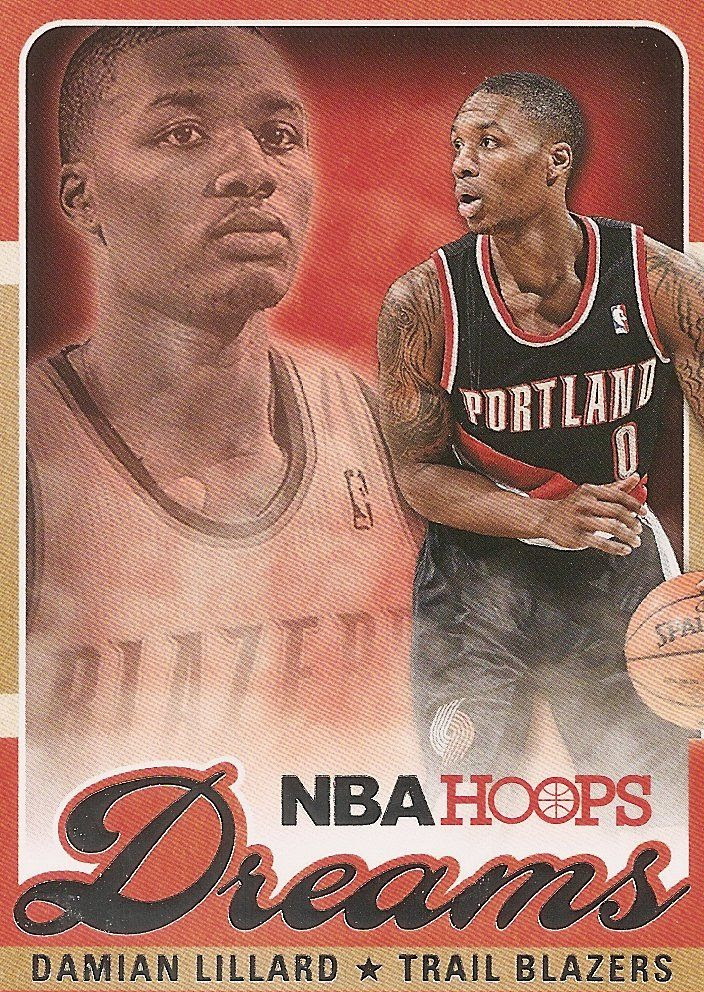 Going with a similar look, the Hoop Dreams insert cards also have that retro feel to them. These cards show off the NBA's up and coming talent. My favorite part of this card has to be the huge 'Dreams' logo in foil. Damian Lillard was the hottest rookie last year, and is a great addition to this set! 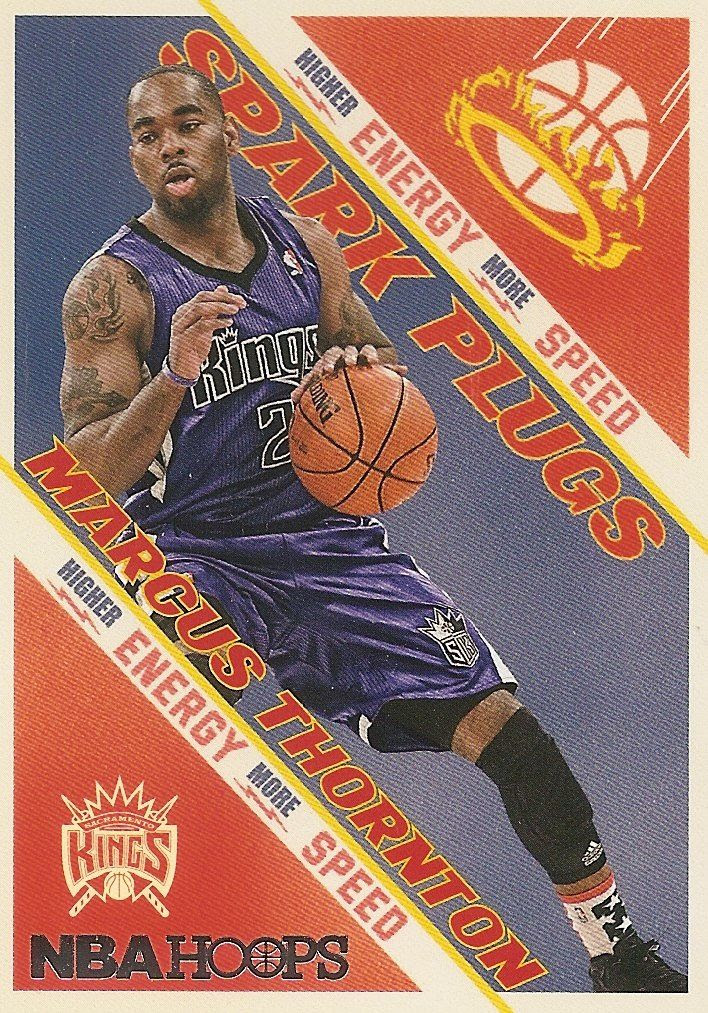 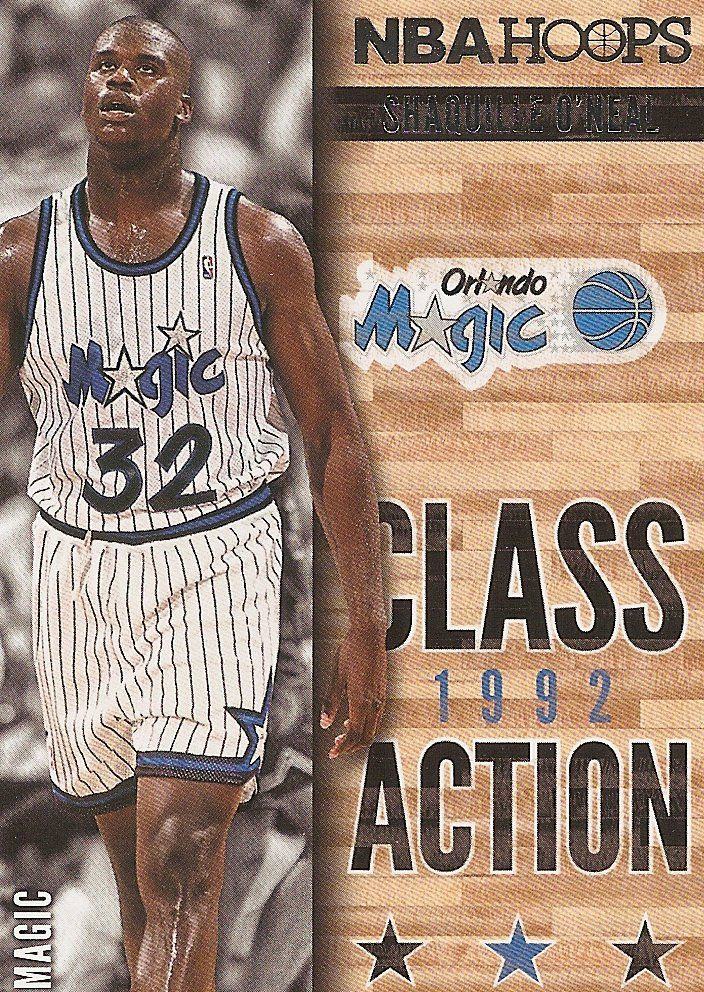 The Class Action insert cards remind me of some of the older, but nicer, 90's insert cards (particularly from Fleer Ultra). And it brings even more nostalgia because this particular card shows a young Shaquille O'Neal when he was with his first team - The Magic. Though these cards don't have the older retro feel as the previously shown ones, it still gives me a trip down memory lane. 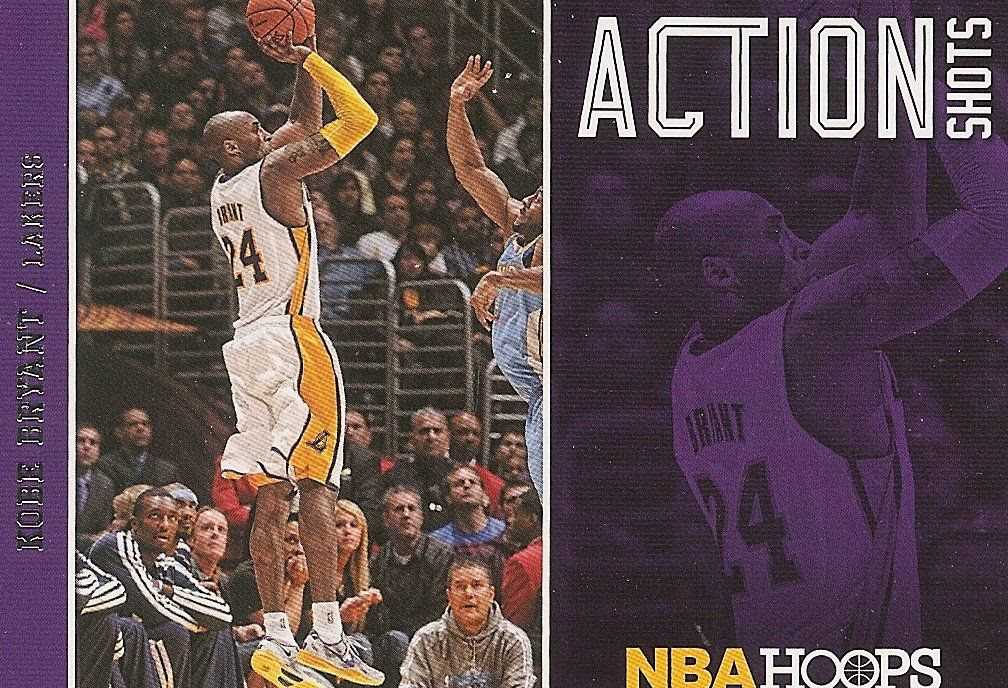 Action Shots insert cards leave behind the older feel. These cards look like modern day insert cards that you would expect to find in basketball products. I am a fan of the horizontal look, and using the team colors as accents here was a great idea. 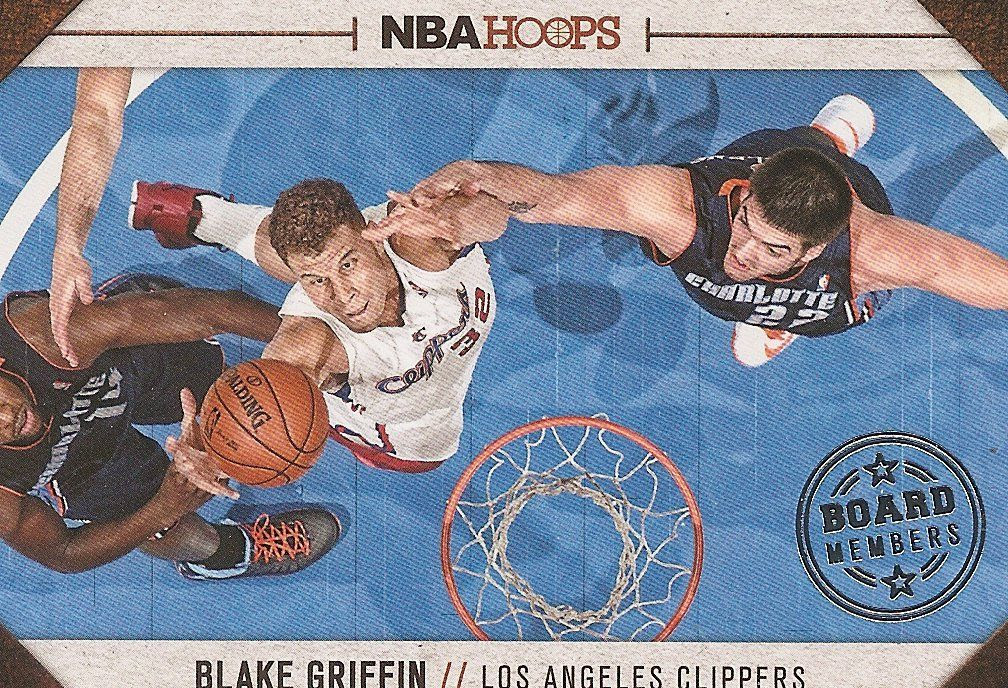 Continuing on with the horizontal theme are the Board Member inserts. These cards celebrate the great rebounders of the game. It's cool that each photo has been taken from the above the rim camera mounted on the backboard. These cards are like the Net Cam cards in Score Hockey. They present a unique view of the action. The little circular Board Member logo is a nice touch. 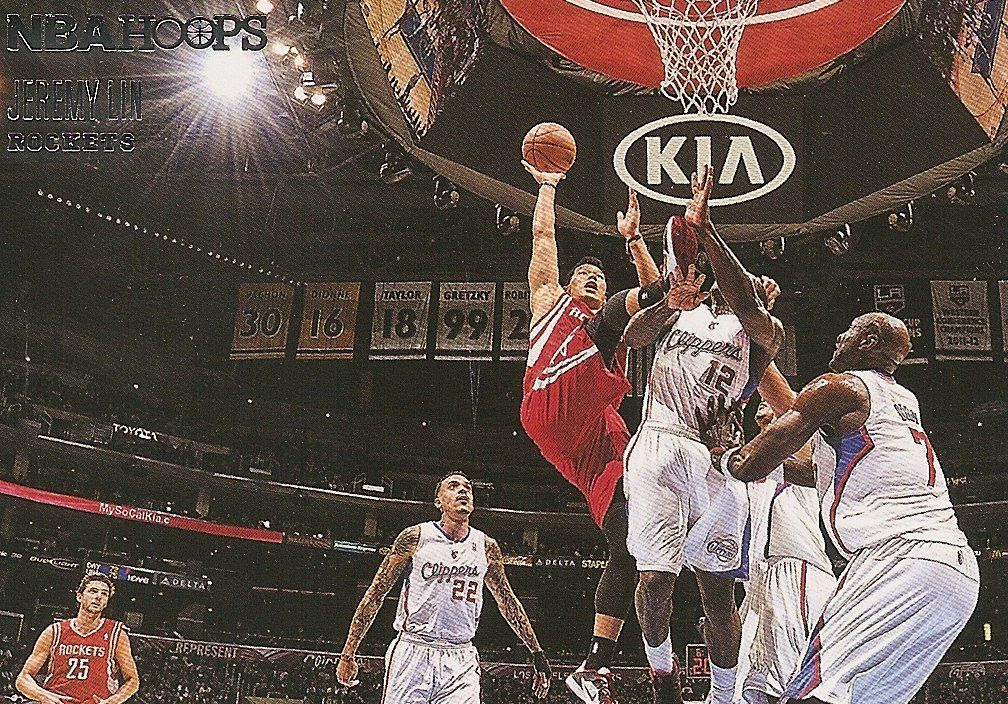 Another favorite insert card of mine are these Courtside inserts. The card is almost like a stand alone photograph of the action. Only a small corner of the card has the player name, team, and brand logo. The focus is almost completely on the photograph taken. And these photos are great. You get to see the action really up close, from where a sideline photographer site and would see. Very cool shots, love it! 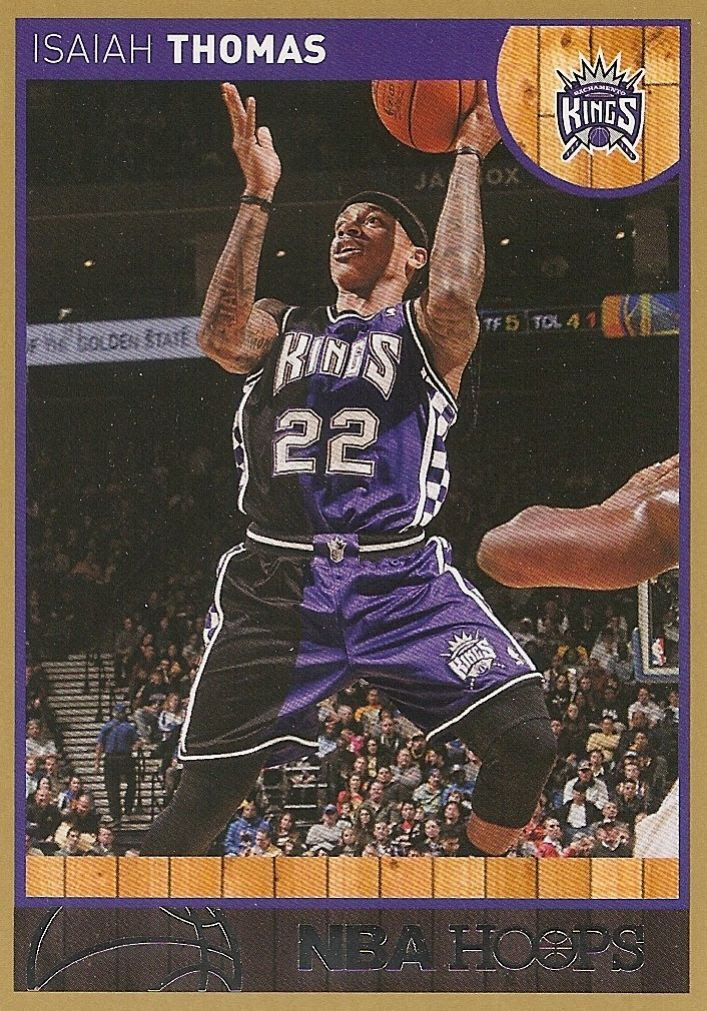 Gold parallel cards are the most plentiful type of parallel card in the jumbo pack. Almost the entire amount of cards after the inserts are gold parallels. The gold border is nice, but it makes me wonder why Panini chose to throw so many parallel cards into the pack. I feel it really de-values them. 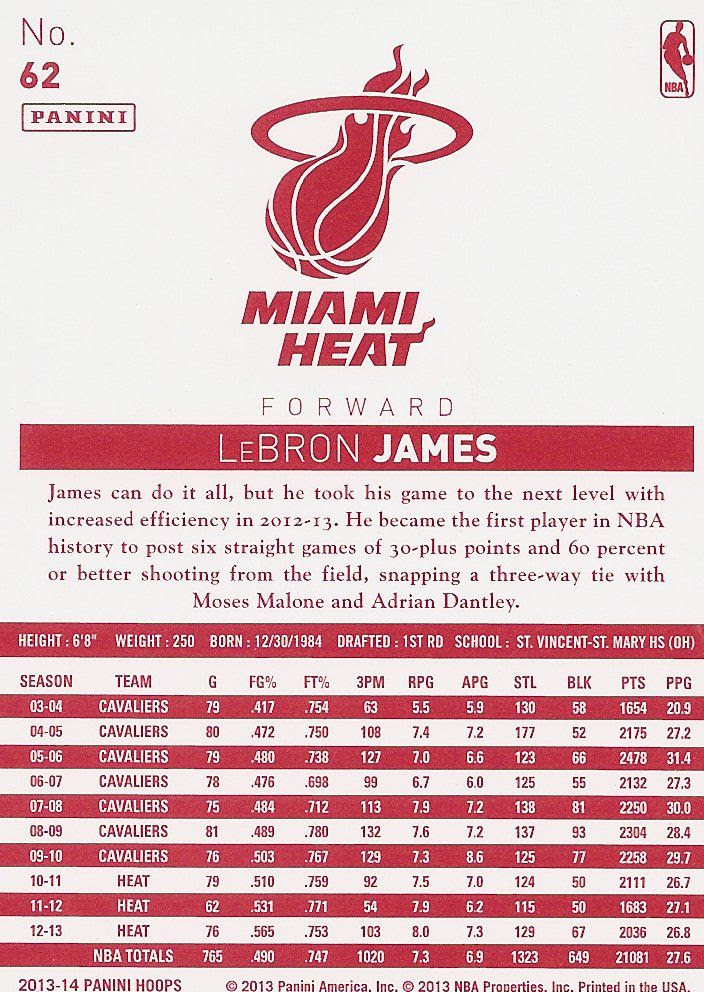 Red backed parallels are also found in good amount in each jumbo pack. In hockey, red parallels were not an easy pull and are actually worth a nice amount of money on the secondary market. With these Hoops red backs, you get plenty per pack thus making them just a throw-in gimme type of card. If it were up to me, I'd make all parallel cards at most one-per-pack. Having that many multiples just doesn't make sense to me. 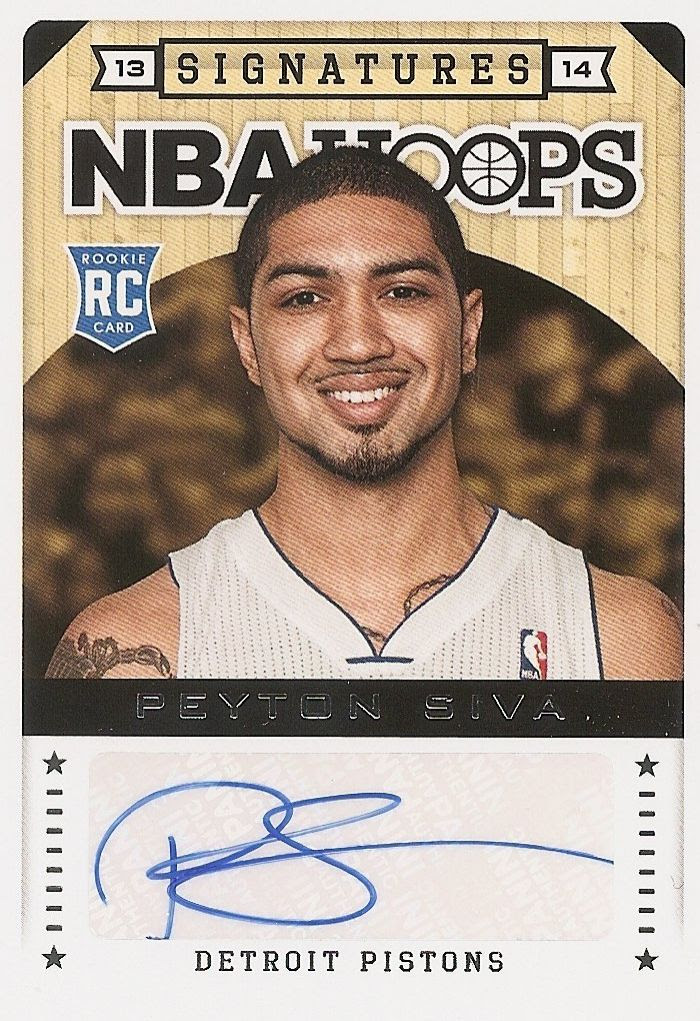 Though it states that collectors can find only two autographs per box, I was able to manage three! Two were veteran autos (Brandon Rush and Marreese Speights) and one was of rookie Peyton Siva. I'm pretty happy with the Siva as I have heard the rookie autos are harder to find. In terms of design, I do like the hardwood look on the card, but like the base cards, I wish there wasn't that white border framing the card. The autographs found here are of the sticker variety. My one memorabilia card in the box was this Marc Gasol jersey card. From a design perspective, this card hits all the right notes. It's not generic looking, there is foil highlighting, and nice graphics. I'm very pleased with how these cards look. Looking on the back of the card, it states the the material enclosed was game-worn. In this era of event-worn memorabilia, seeing that is pretty refreshing!

So my box of Hoops had a total of four hits. It's always good when a box over delivers!

Overall Rating -
NBA Hoops is a brand that has been around for a long time. It's not the brand you think of when you want a super-premium card product... however... Hoops really brings a lot of fun to the collecting experience. Though I think there are perhaps too many inserts per pack, the inserts are well themed and look great for the most part. It's fun to see what players were chosen to be depicted on what card. For younger collectors learning about the game, these inserts are great.

For hit lovers, Hoops has some things to really look for. The rookie autographs are in demand now, and are not guaranteed pulls out of boxes, thus giving them stronger values. They are worth the chase as they are nice, clean looking cards that are the first autographed releases of the new rookies.

It is worth it to get your hands on 13/14 Hoops Basketball. The jumbo packs are great fun to open and can give collectors some good value! Panini gives collectors a solid product in Hoops, and I think collectors will embrace this long running name in basketball cards this year.

Check out my box of 13/14 NBA Hoops Basketball: