For this week's Retail Review I'm going to open up a blaster of 08/09 Upper Deck Series 1. I'm still after that very elusive Stamkos Young Gun, so until I find one, I'm going to keep ripping into these boxes. I wonder if I'll ever pull one out... that card seems to be a difficult find. Just gotta keep trying, I guess! Maybe it's in this one! We'll see! 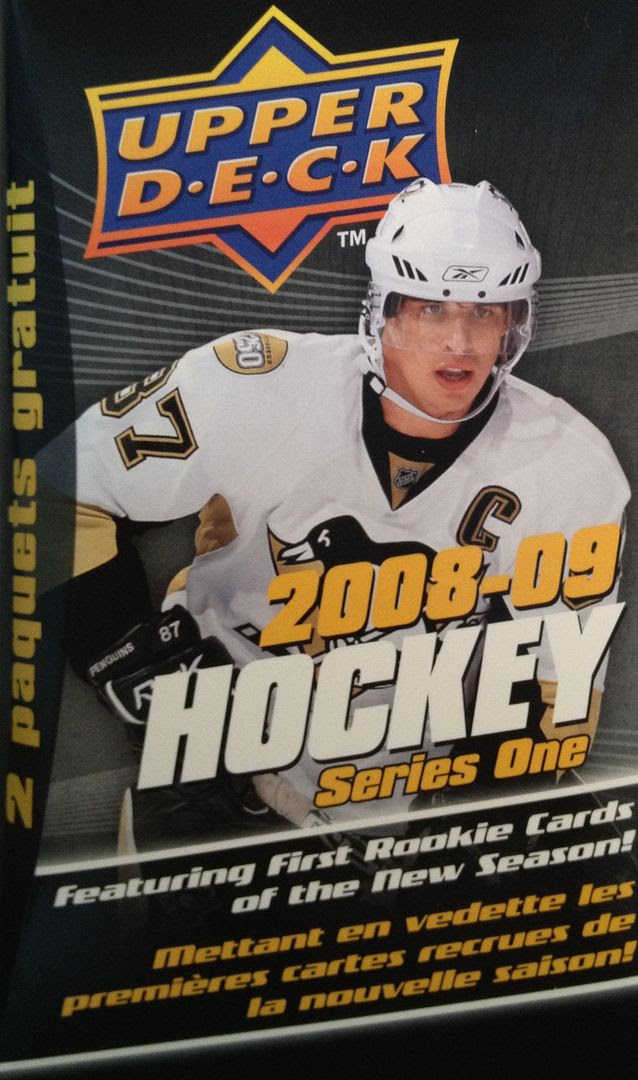 So each of these blasters has 12 packs... 12 of the EXACT SAME packs. I wonder why Upper Deck chose to say 10 packs + 2 FREE packs rather than just saying 12 packs. Is it a marketing ploy? Every 08/09 and later UD blasters I have gotten have 12 packs in them - that's just not anything out of the ordinary. Upper Deck could have printed any number of things on the box. Maybe they could have gone with 9 packs and 3 FREE PACKS!!! Or maybe 2 packs and 10 FREE PACKS!!! You get the idea. I think it would have been fine to just say the blaster has 12 packs in it. This FREE PACKS things is a bit ridiculous to me.

I'd rather the blaster say something like 'Look for TWO Young Gun rookie cards'. Because that's really the draw of these blasters. Upper Deck series 1 and 2 are all about the Young Guns. They are by far the most popular rookie cards in hockey, and I think they are worth the big print on the box. The box does say that it features the first rookie cards of the season... but it is definitely not as prominent on the packaging as it could be.


Review -
Alas... no Stamkos Young Gun for me still! The two Young Guns were Mike Brown and Michael Frolik - definitely not big names to pull. These will just jump into my growing collection of non-Stamkos 08/09 Young Gun cards that I have pulled from Retail Review.

For whatever reason, I felt a good deal of deja vu with this break. Many of the inserts that came out of this box were cards that I have pulled before. I had previously pulled both the Thornton All World Team insert as well as the Zetterberg Hat Trick Heroes card. They both have made the top 3 before, so I'll leave them out this time. A Rick Nash Captains Calling also popped out of this blaster as well. I think I also have this card as well, but I haven't got to my big box of inserts to confirm this. All-in-all, some decent cards came out of this blaster... just nothing huge. There were eight inserts or rookie cards out of twelve packs.

Today's top 3 features cards from the same insert set... The All World Team! Here they are: 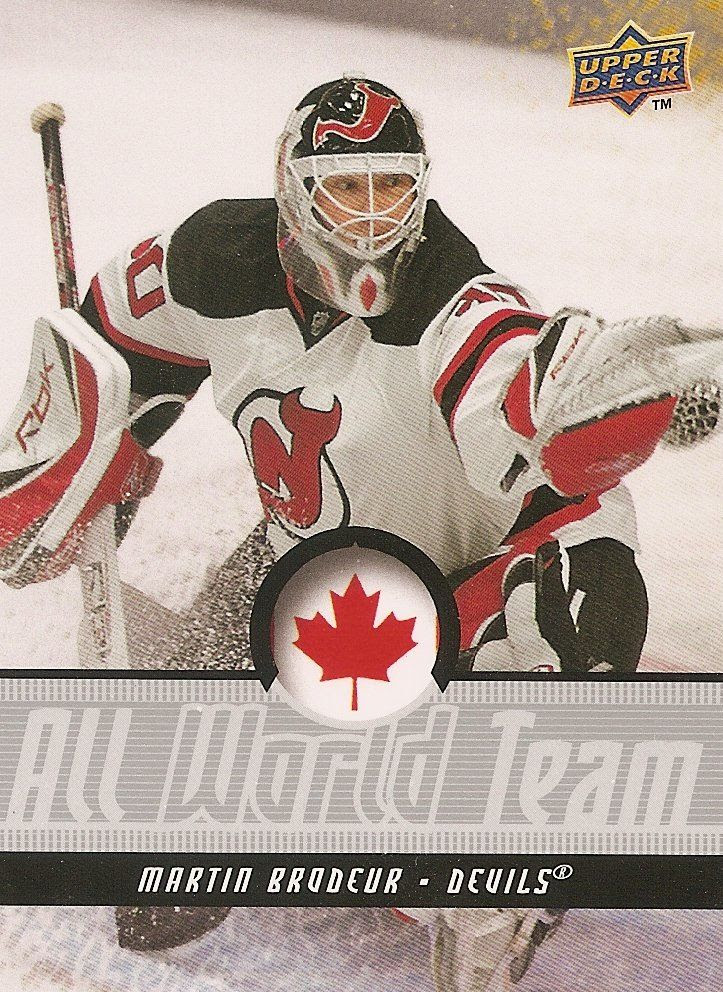 #3 - Martin Brodeur Card No. AWT5
Sadly, Martin Brodeur didn't start the Devils season opener this year. It was like the first time in 18 years that he didn't! Crazy stuff! Brodeur has had an amazing career and will definitely find a place in the HOF after his retirement. 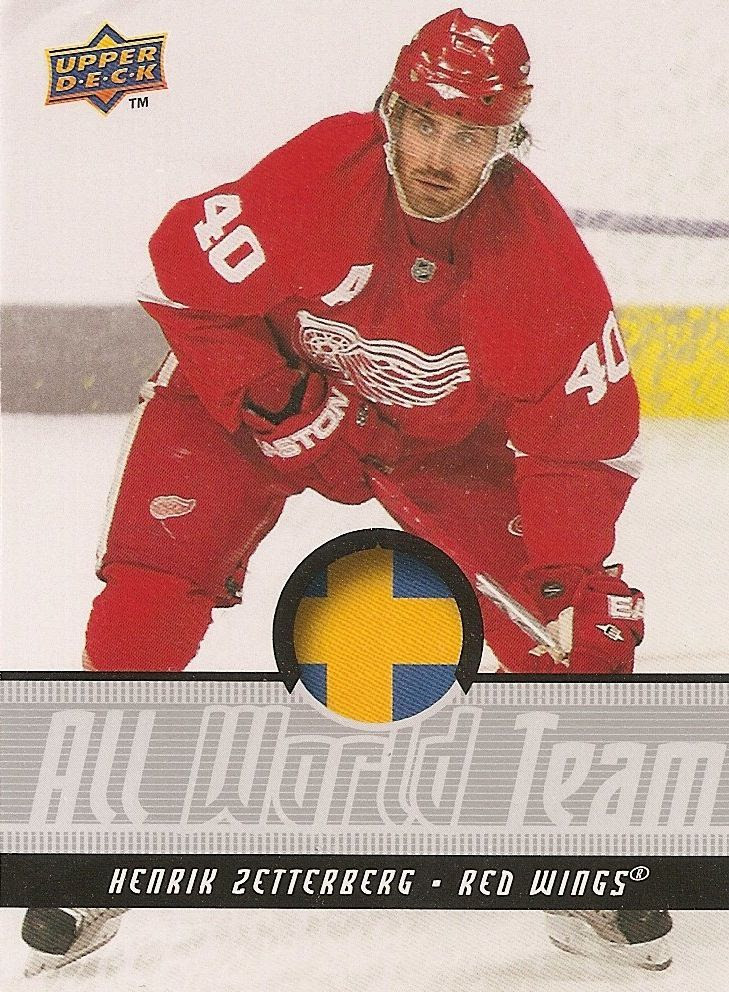 #2 - Henrik Zetterberg Card No. AWT6
I like this card because of the contrasting colors on it. You have the red and white Detroit colors surrounding the Swedish flag. It definitely makes this card stand out a bit as the colors clash. Hmm, I just realized that I pulled two Zetterberg inserts from this blaster. That's pretty cool, as Zetterberg has been a solid player throughout his career. 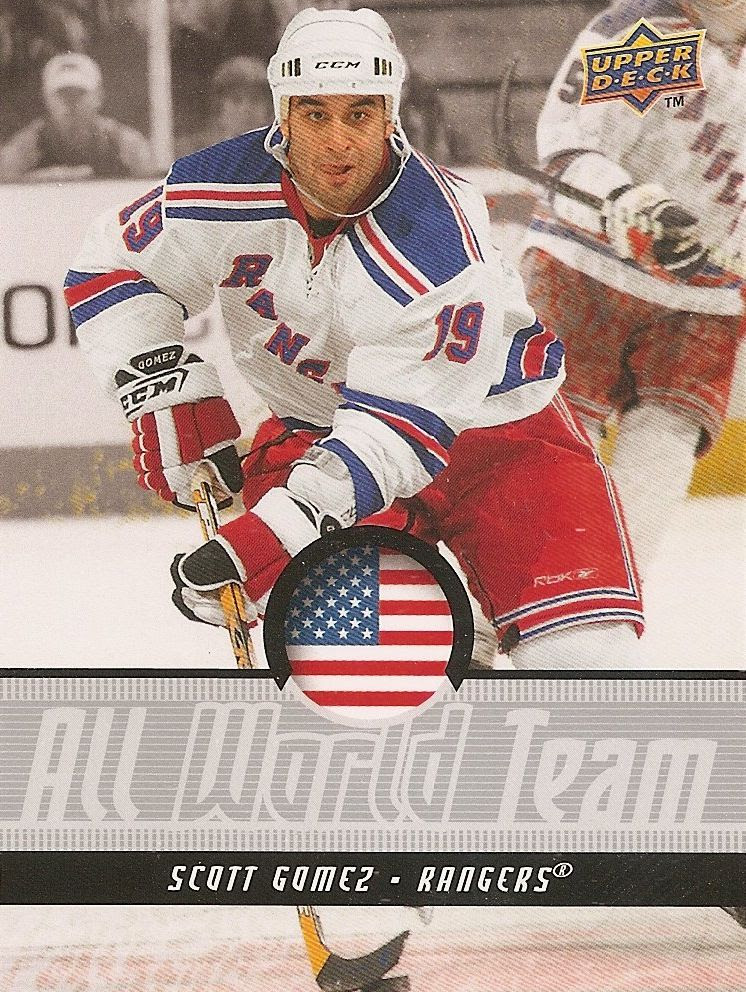 #1 - Scott Gomez Card No. AWT17
It's a Scott Gomez sighting! You might be surprised at this card being in the top spot... but there are a few reasons for it being here. First off, Gomez was a Shark last season, and he provided some good leadership on the team. I appreciated that. Second, this card looks very cool to me. There is red, white, and blue all over the place - from the Rangers' colors to the USA flag in the middle. And third, it's a Scott Gomez insert card! You just don't see these things anywhere nowadays! By the way, Gomez scored a game winning goal earlier this week. Booya!

Overall Value -
This blaster box is as typical as they come. I was able to get a slew of insert cards and the requisite two Young Gun cards. I'm relatively happy with this box as I felt the insert cards were of quality players. I'm going to keep getting these 08/09 blasters when I can find them. The cards are nice, and there are definitely some great finds in this product. I've gotta track down one of those Stamkos YGs one of these days!

Look for a new episode of Retail Review every Sunday!
Posted by luke. at 7:08 AM