It has only been about six months since the last baseball Prizm release, but Panini has decided to give us more! It looks like Panini is going all out with this brand. The hockey version of Prizm released a couple weeks ago, and the baseball version has now released very similar look and configuration. If you've enjoyed Prizm so far, you've got to be psyched about even more foil-y goodness to rip into! 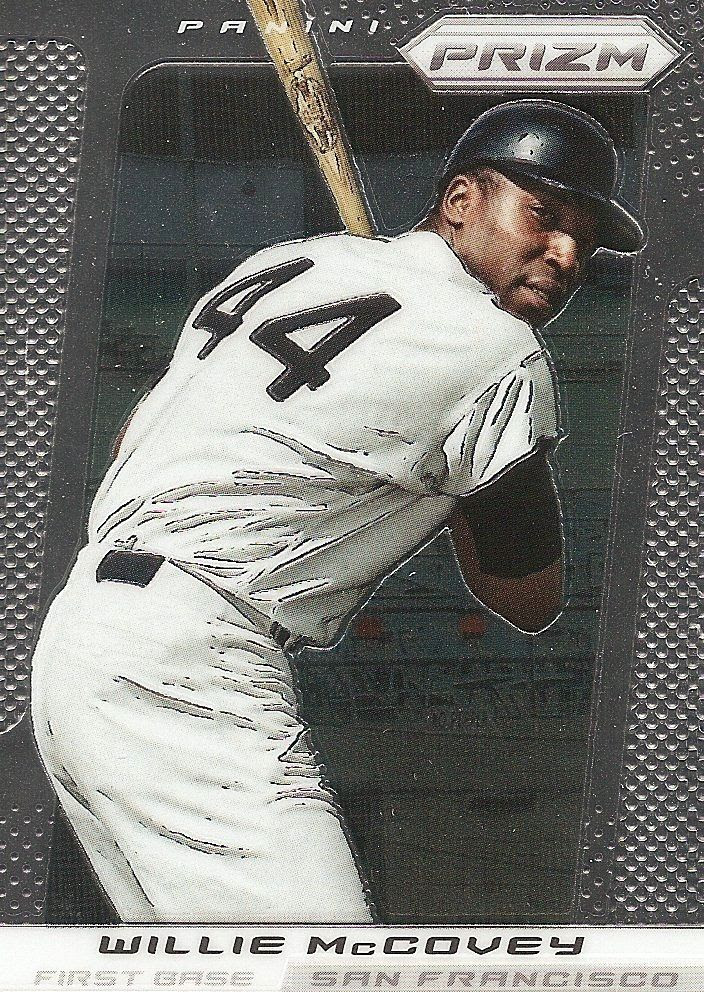 Base Card Design -
The Prizm base cards have the exact same look as their hockey counterparts. I don't have too much to add to my previous assessment in terms of their design. If you want to see what I thought about this design, click here for my Prizm hockey review. One big difference with these baseball Prizm base as compared to the hockey is the inclusion of retired players like Willie McCovey. I just mentioned this in my 2013 Certified Football review, but I think it's neat to feature older photographs on the foil look. It's a cool contrast that makes the cards visually interesting. 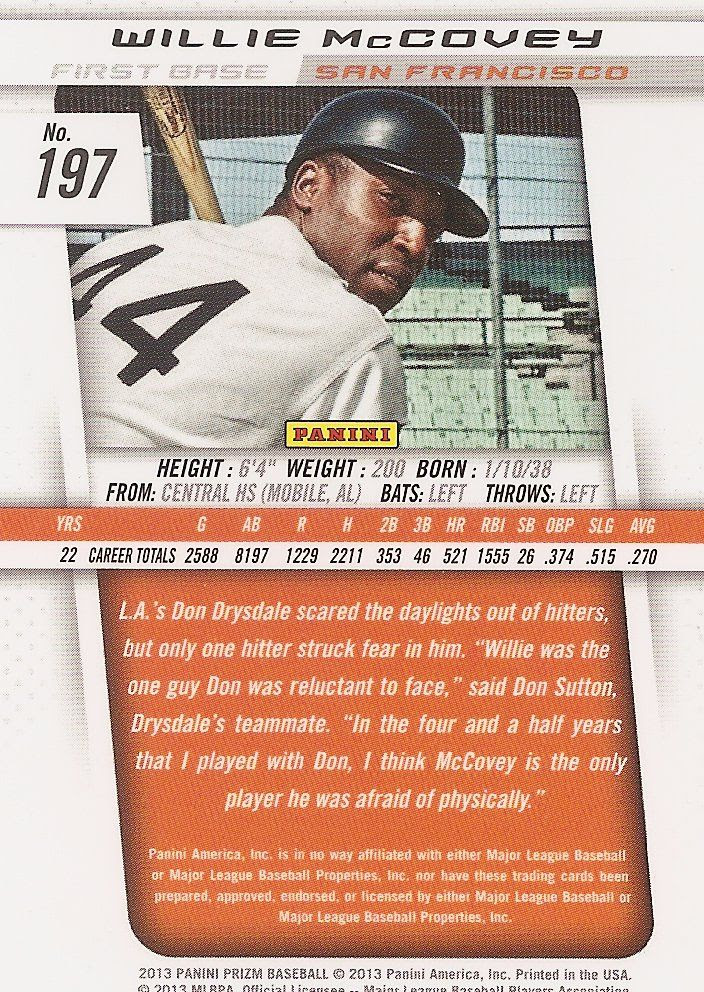 The card backs again feature just one stat line of information that sums up the player's career. I like this for retired players so that you get sort of a 'time-capsule' of their complete and finished time in professional baseball. For current players, I think I would like to see season-by-season statistics listed. Each card will have a short write-up of the player for collectors to read. 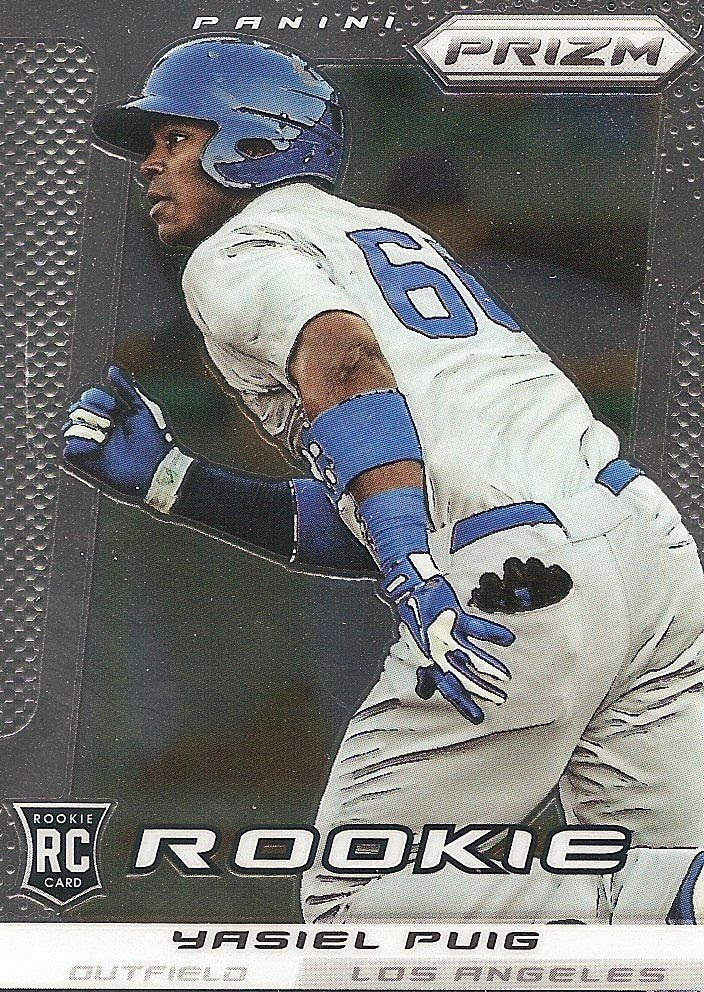 Each Prizm pack that I opened contained two rookie cards. Wait... did baseball have a double rookie class too? Of course not... but I find it funny that hockey had a double rookie class this year, and those packs only yielded one rookie per pack. So here in baseball you get double the rookie goodness. I was lucky enough to pull this Yasiel Puig in my box. He's definitely the hottest rookie to get currently.

Inserts/Game-Used/Autos -
Each box of Prizm will give collectors two autographed cards and a number of inserts and parallel cards. The autographs are of the on-sticker variety. Both base and insert cards will have multiple paralleled versions of themselves. Collectors can look for shiny refracted light cards and colored variations. What collectors won't find are game-used memorabilia cards... which is too bad because I think memorabilia foil cards look awesome. 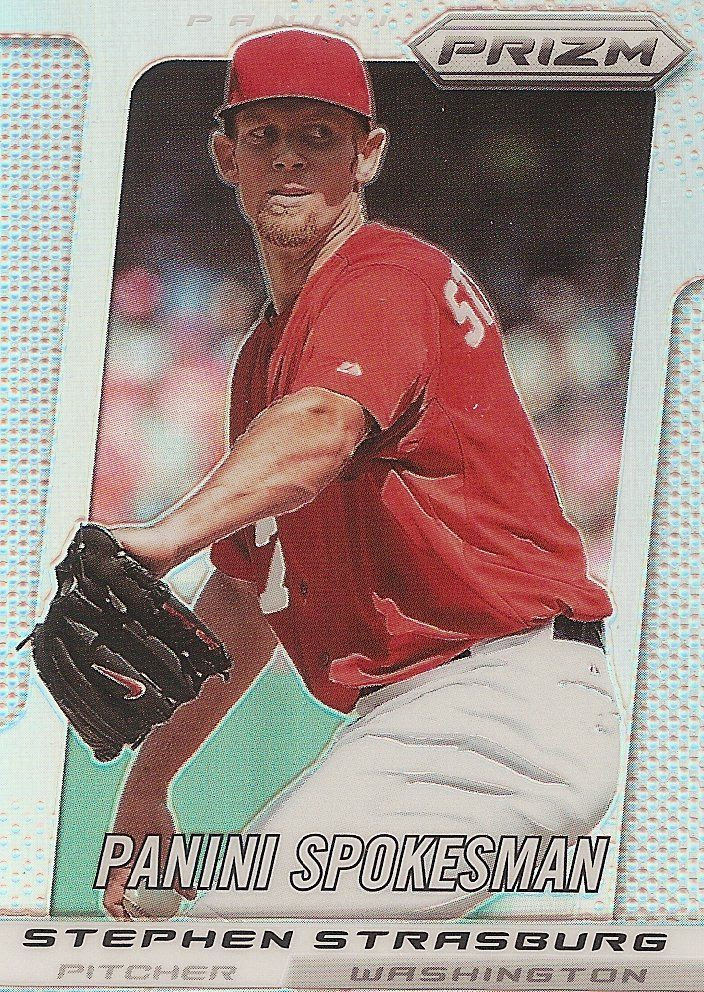 The most common type of parallel card is the Prizm Prizm. No, that's not a typo. These Prizm Prizm cards feature light refracting technology. When shined on in light, the card has a beautiful rainbow shimmer to it. These cards stand out pretty well from their standard base counterparts, but in case you couldn't tell the difference, they are noted Prizm on the back under the card number. The Strasburg Prizm Prizm I pulled is actually part of a base short print highlight set. I found it funny that this card has 'Panini Spokesman' in large font on the front of this card. 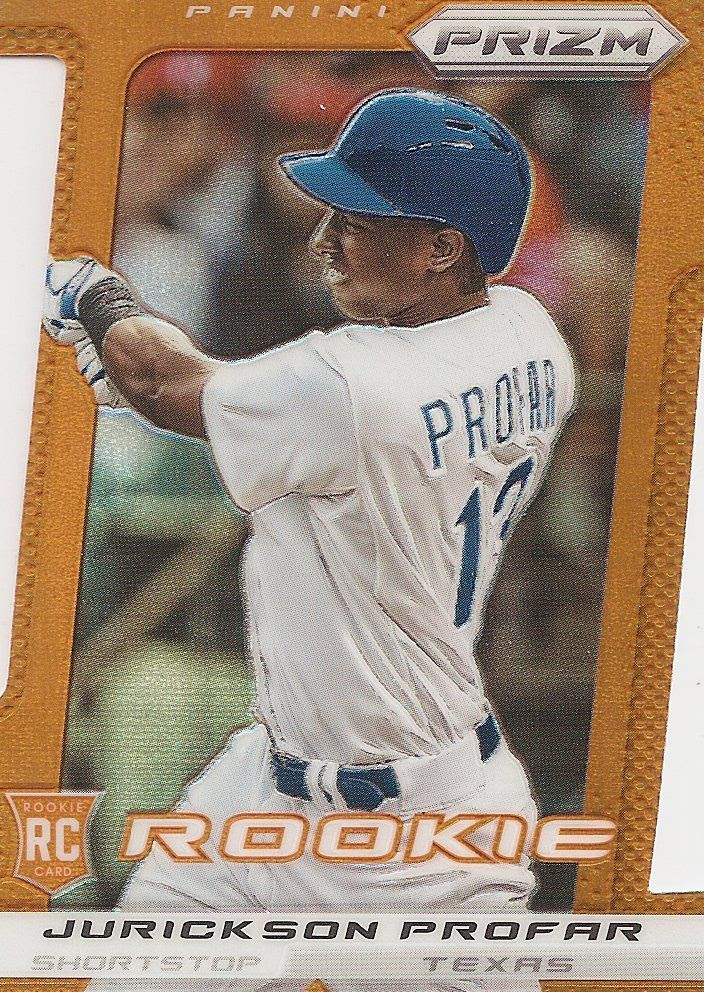 Orange Prizm die-cut parallels numbered to only 60 are also available to find. I really like the look of these cards, they look very sharp. I'm a huge fan of using bright colors that stand out... and these cards definitely do that! As I mentioned in my hockey review, there are a large number of parallel cards to find of the base set. They go from hobby exclusives to retail exclusives and are serial numbered all the way to Finite 1 of 1's. 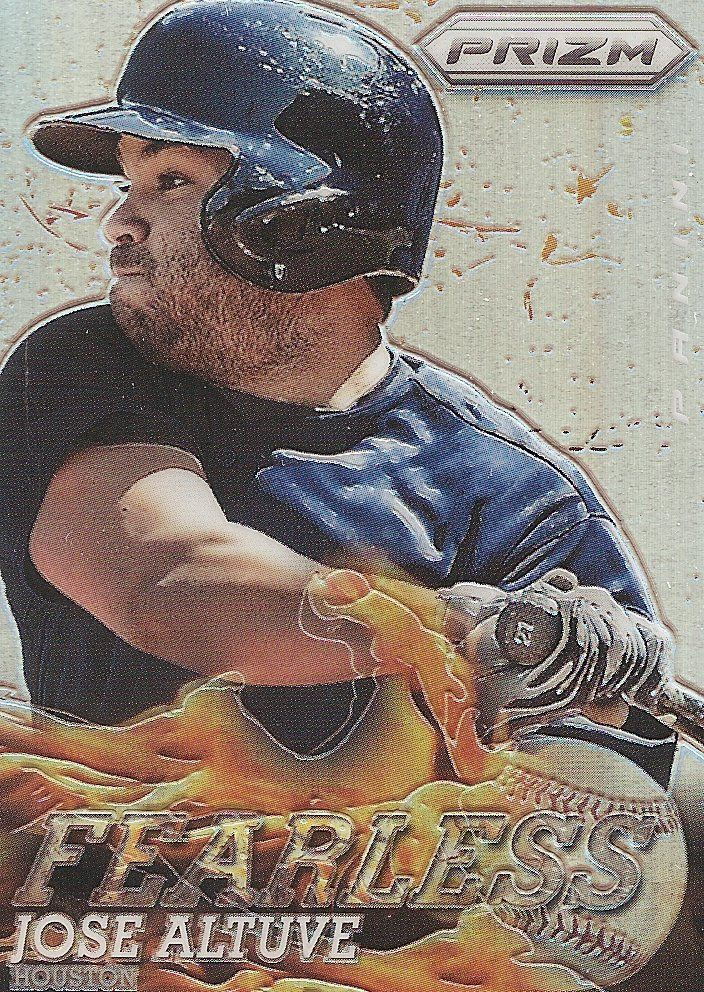 One of my favorite looking inserts from Prizm Baseball are these Fearless cards. The graphic at the bottom with the flame looks great in person. I am hoping that Panini does more of this type of card design in the future... this melding of organic or natural elements with the slick foil technology. So far, I've seen a lot of modern looking cards with graphics, these Fearless inserts are a step in a great direction. 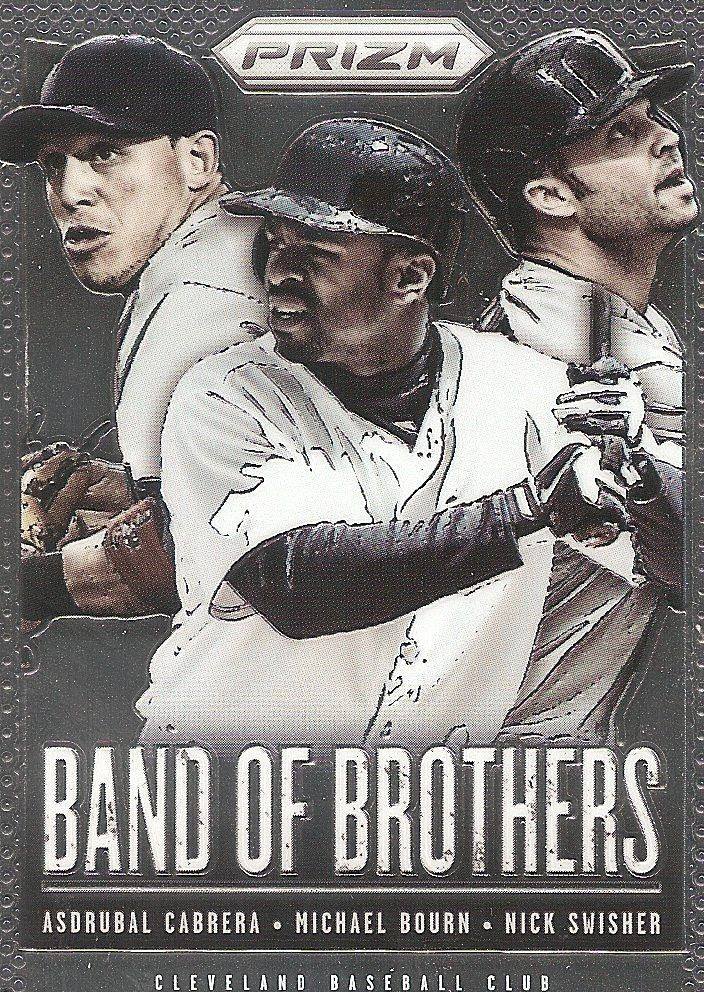 The Band of Brothers insert set is unique in that it features a trio of players. To me this card looks like a movie poster. With the insert name, you'd think that's what Panini was going for. It's definitely a unique looking card with a different design style. 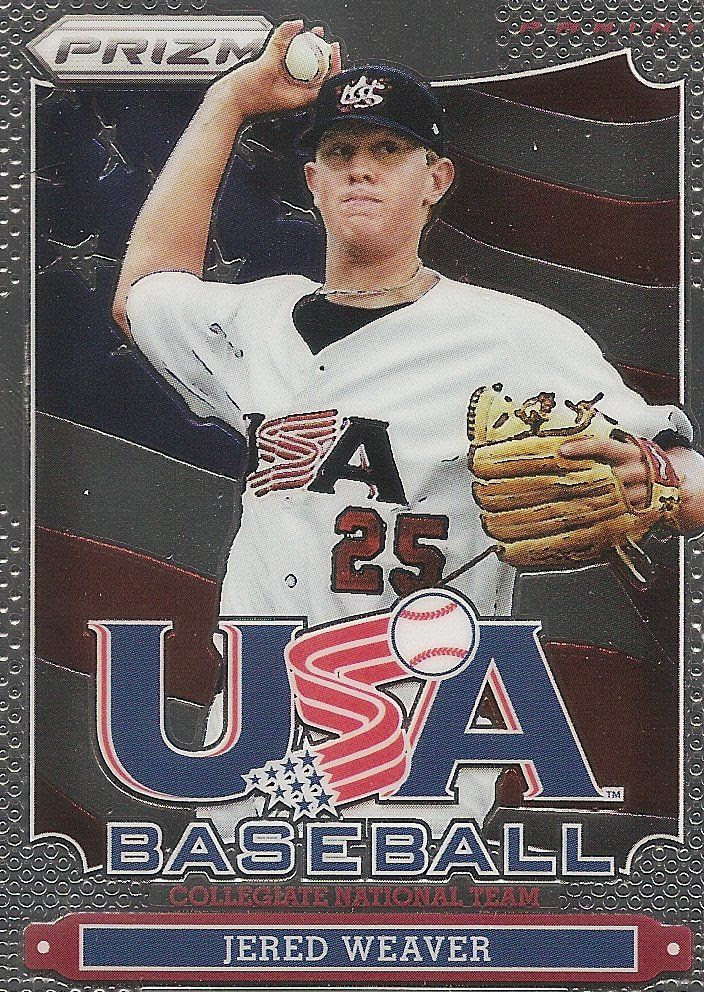 USA Baseball is represented in Prizm... and look... there are LOGOS! It's nice to see actual logos on the card, and because Panini has a USA Baseball license, they are able to do that. These cards stand out well as the red, white, and blue color scheme really pops. One little accent I really like is the red Panini logo in the upper right corner. It's a small detail that looks very cool. 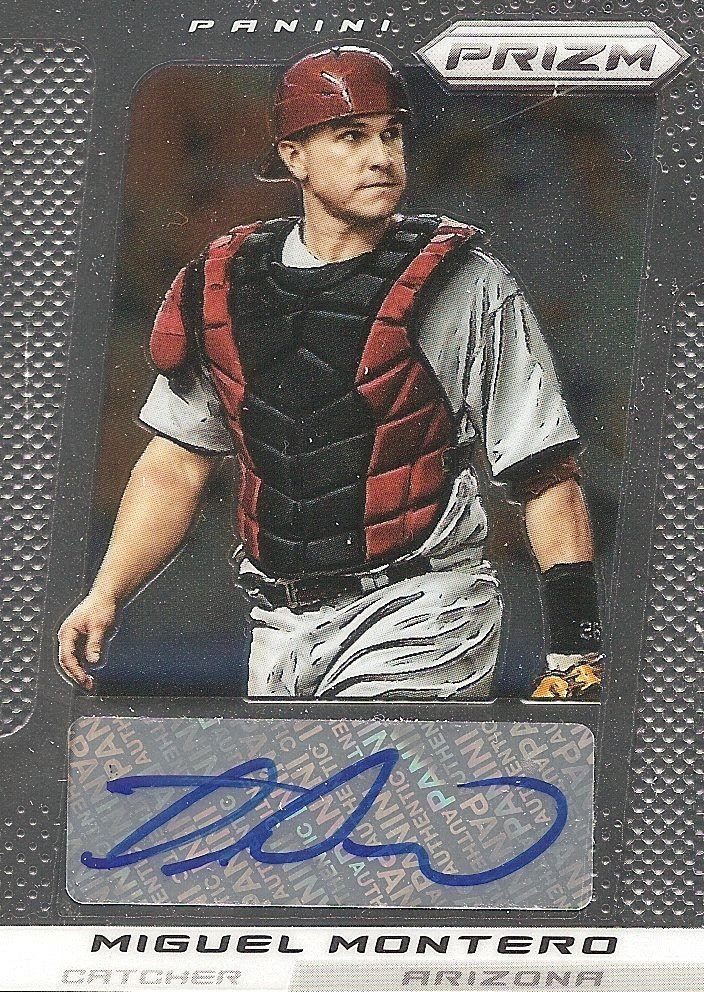 This Miguel Montero is what a standard autograph would look like from Prizm. It's simply the base card with a spot for a sticker autograph. Limited Prizm and one-of-one Finite variations are available for this autographed set. I have to say that I wish these autographs were more exciting. It's great to pull a superstar player autograph, but I would have liked an autographed card design with more flair. 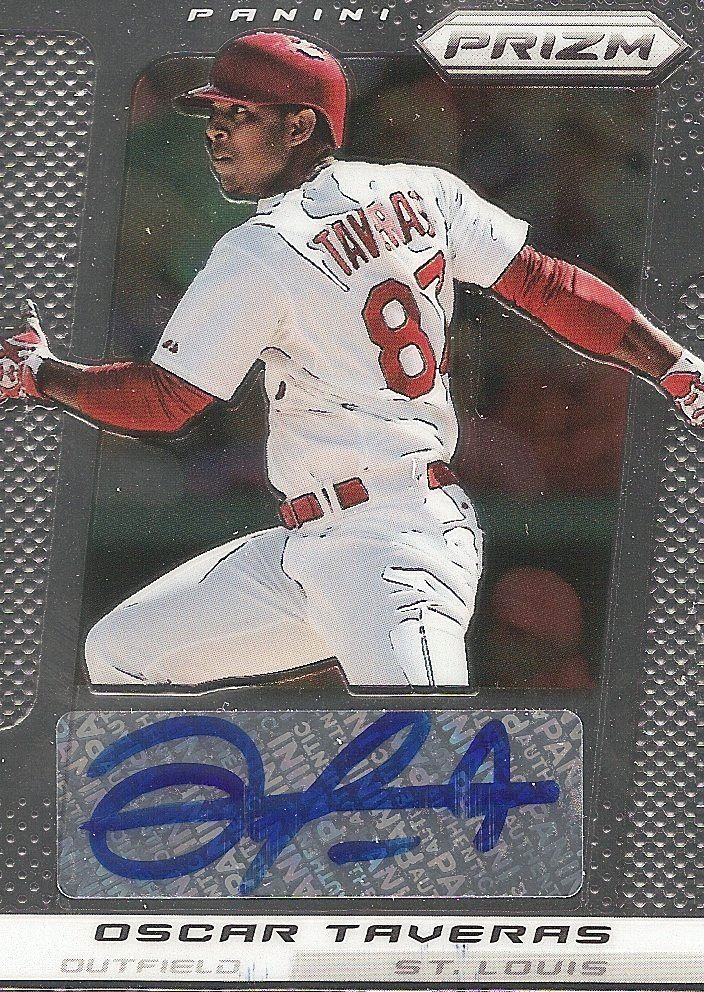 The other autograph from this review box was of Oscar Taveras. As you can see from the scan, the autograph is a bit smudged as well as the area where his name is. It's too bad as this was the better of the two autographs to get. Also, I thin Taveras used a pen that was a bit too large. The auto looks a bit clunky to me.

Check out more boxes of Prizm to see the different parallel variations and other inserts to be found. Like I said in my hockey review, the autographs seem like enticements to get hit collectors to buy the product. The draw of Prizm is in the limited parallel cards you can find within it.

Overall Rating -
You'll notice that I gave the inserts/game-used/autos score a bump up compared to the hockey version of Prizm. I feel that baseball collectors have had a long tradition of collecting parallel cards. Checking the prices on eBay for some Prizm parallel cards really shocked me! They command some pretty high prices! So that's the reason for the increase.

Prizm is a fun product to break, and there are definitely cards of value to be found in the product. I was a bit skeptical about having Prizm come out again so soon after the 2012 version, but I think this product is good enough that collectors won't mind.

If you enjoy baseball cards, this is a great mid-range product to get. Not only do you get two autographs per box, you could really hit a home-run with a hot low numbered parallel card. I'd definitely recommend busting a box or two!


Check out my 2013 Prizm Baseball break: