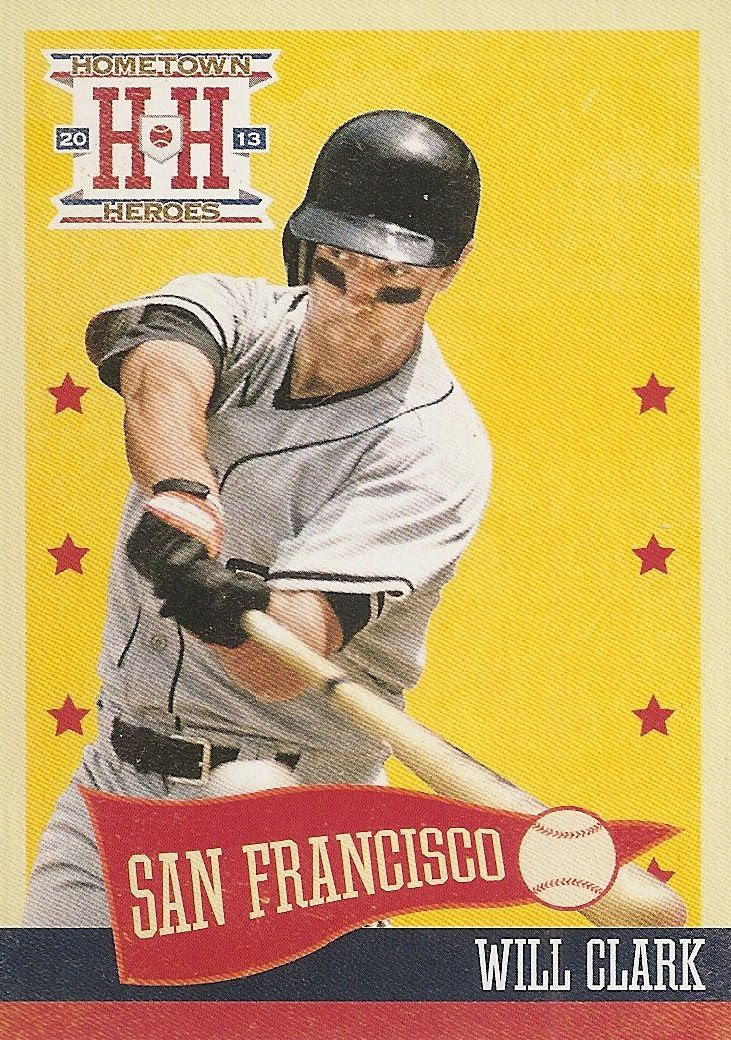 Base Card Design -
Opening up the packs is like busting an old jumbo or cello pack from back in the day. There is a generous amount of base cards within. Hometown Heroes, as it turns out, is a retro inspired product that focuses on a vast variety of players from the present and goes back upwards of forty years. The player selection begins around the late seventies and ends with today's rookies. With 300 cards in the base set, Panini has included a myriad of MLB favorites. Each Hometown Heroes base card is printed on old school cardboard stock. The colors used bring back a nostalgic feel as they are faded reds and yellows. What really gets me in the retro mood is the pennant graphic with the city name. You just don't see many pennant graphics on cards nowadays. Also, the star graphics on the sides add more retro-y goodness to the card. You'll notice that though Panini has a MLB Player's Association license, they do not have an MLB license for team logos. All the logos and team representations have been removed from the photographs. 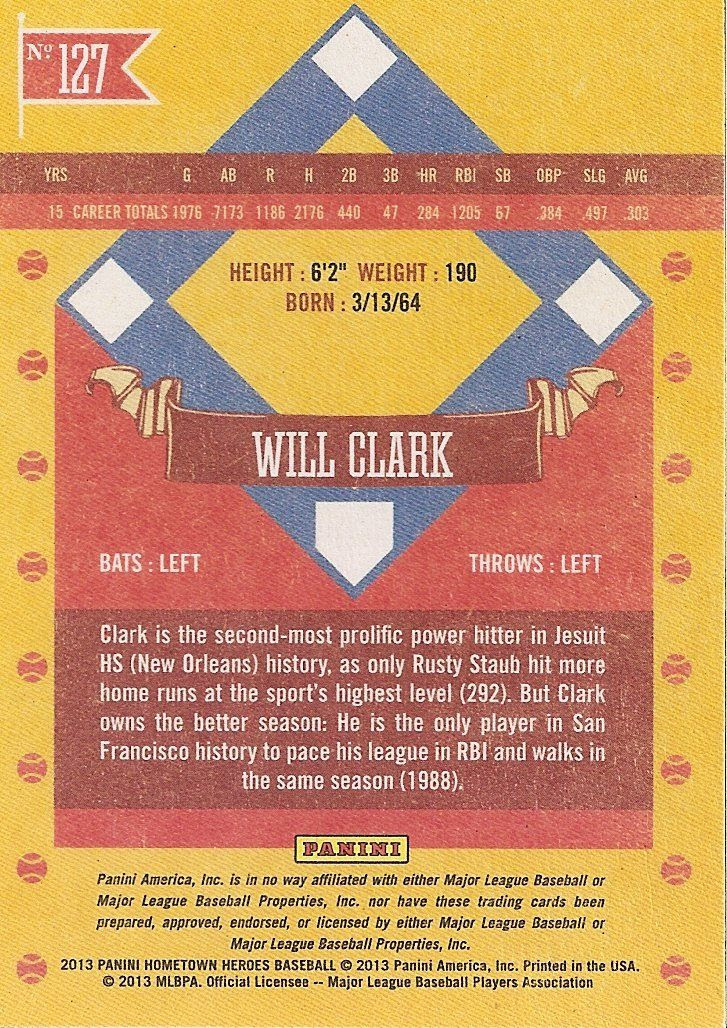 The back of the Hometown Heroes base card is surprisingly colorful. It uses similar color schemes as the front. I do feel that the colors on the back are a little bit too bold though. While the front of the card is somewhat faded, the back colors feel highly saturated. I would have preferred them to be toned down a bit. The main feature of the card back has to be the paragraph of written information. Each card talks about a the player with a focus on what town or city they were from. It's a really unique idea, thus the name Hometown Heroes. I have really enjoyed finding out the origins of some of theses great athletes from these card backs. Props to Panini for this great idea. 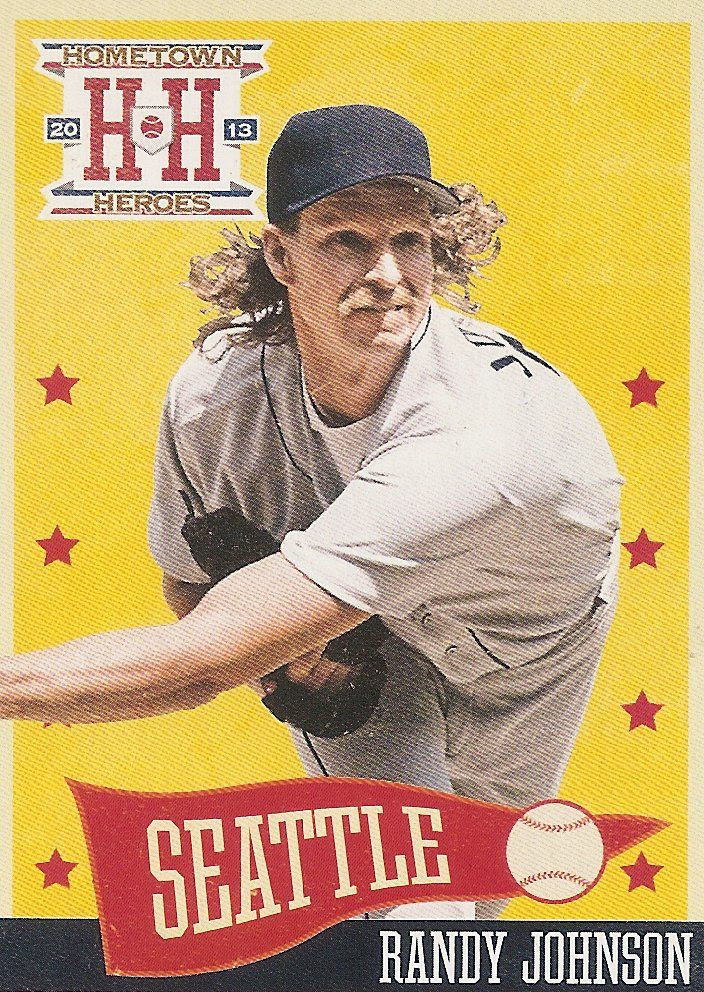 The entire base set design is the same, there aren't really any special subsets to be found. There are, however, special image variation cards that are a part of the main set. These cards are numbered 261-300. I would have never known that this Randy Johnson shown above was a short print without checking the numbering on the back. I think these image variations could be pretty limited as I only received one in this entire box.

All in all, I think these base cards are very solid and would appeal to older school collectors and people who enjoy retro sets. These cards are also great for collectors around my age as they have included players like Jerome Walton in the set. If you remember anything about him... you'll remember how hot his 1989 Upper Deck rookie card was! Hah, now it's in the $.25 bin!

Inserts/Game-Used/Autos -
Each box of Hometown Heroes states that collectors will find three autographs and three sports discs. It is also mentioned that the product features on-card autographs... which is cool... except... all the autos in my box were of the sticker variety. That was a bit disappointing. I would think if they specifically mentioned that, there should at least be one card in the box that was on-card. If you want game-used materials, Hometown Heroes will leave you empty handed as there is no game-used content in the product. 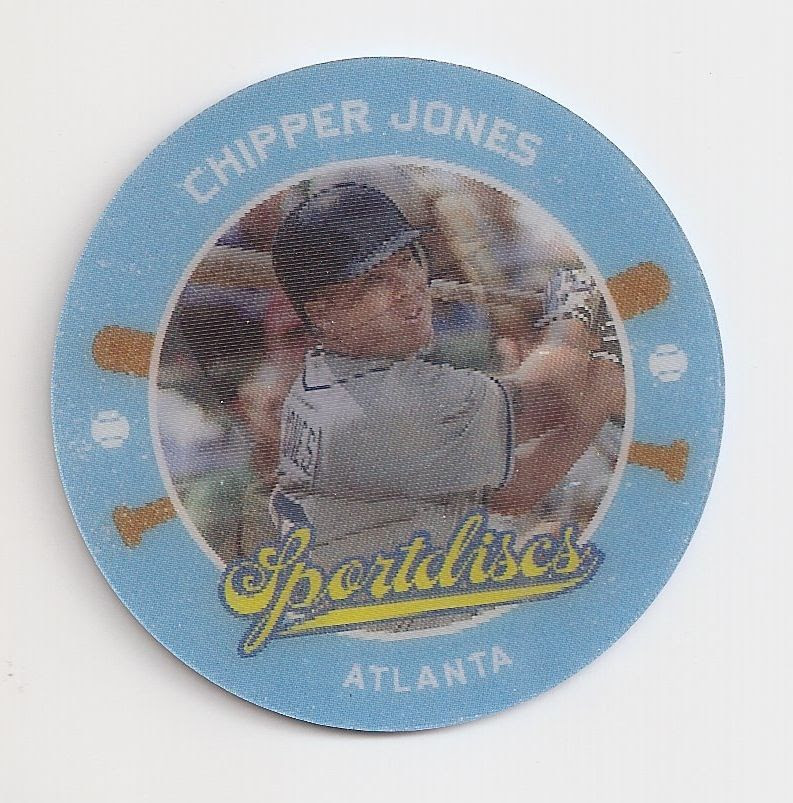 I had no idea what a sports disc was until I opened one in a pack. It turned out to be this funny little thing pictured above. It's a disc that when twisted back and forth will show you a different image. When I collected in the 80's and 90's, there was a company called Sportsflicks that released entire card sets like this. They were a fun novelty item back then... and I think they still are now. These are fun little things, but nothing I would collect seriously. Panini has attempted to add in collectibility by producing variations of these discs. Check the back of the disc for a black ring instead of the standard blue one. Those are the rarer versions. 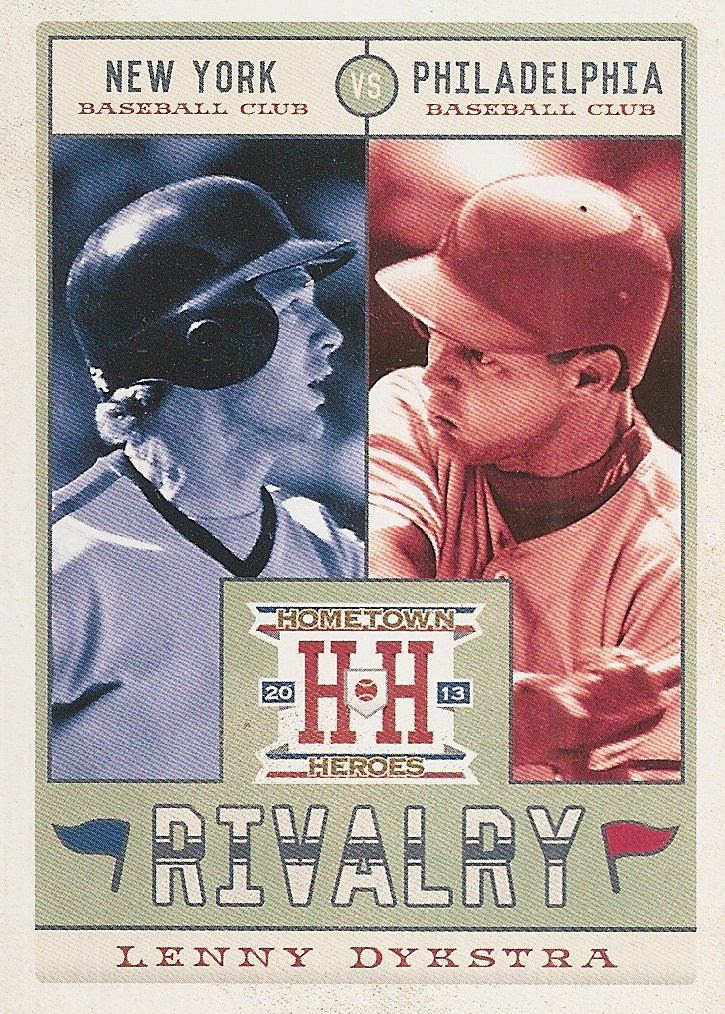 Hometown Heroes has a variety of pretty cool inserts. I love the idea of the inserts that have been included. This Rivalry set is all about players who have gone from one team to their rival team. This insert set goes great with the theme of the product. 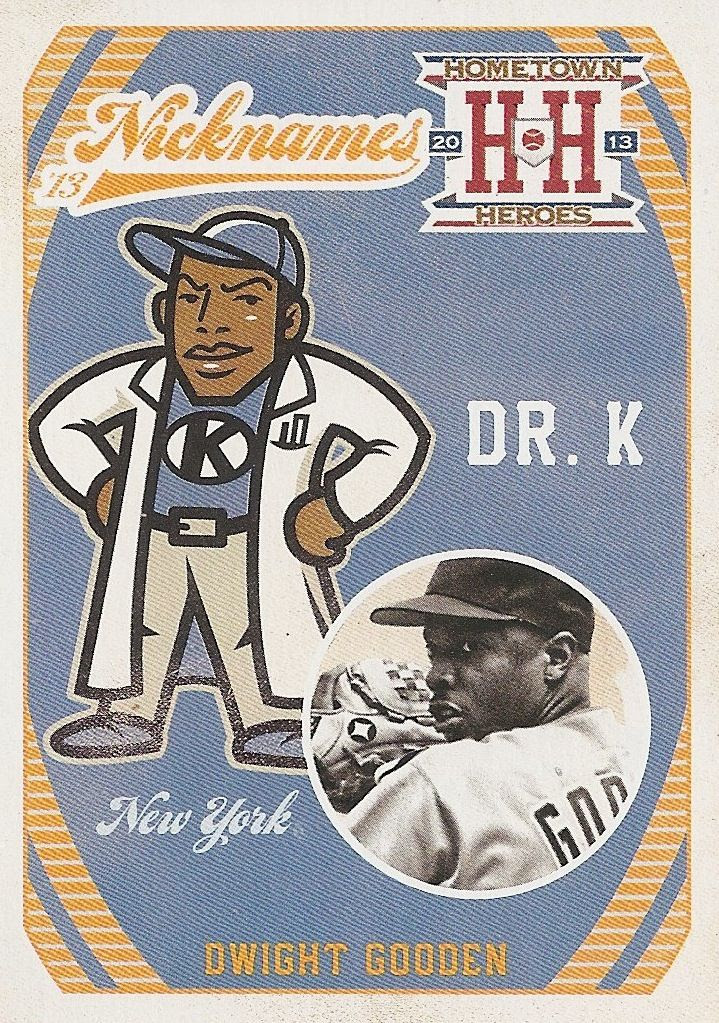 Nicknames are fun mostly because of the cartoon drawing on the card. The drawing is definitely not retro, but it brings back some of the lower end 90's sets that featured cards with comic-type artwork on them. 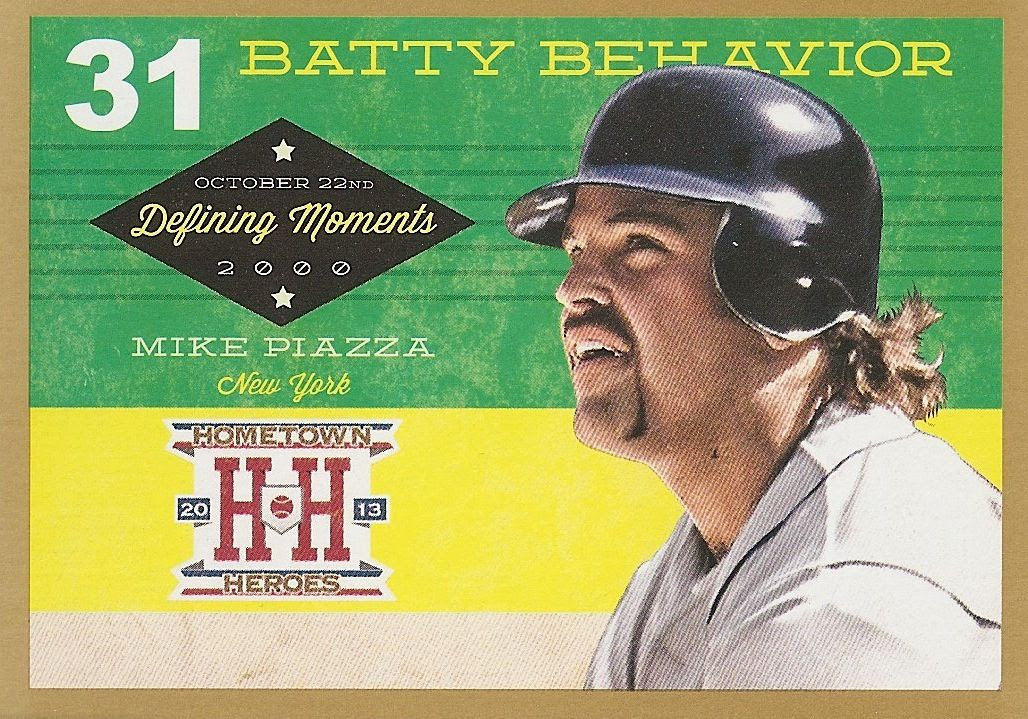 Defining Moments cards are horizontally oriented cards that highlight a particular moment in time. Panini has given the moment a funny name and included it at the top of the card. This particular card of Mike Piazza is a gold parallel version. Gold parallel cards are not difficult pulls, and I don't think they would command much of a premium. 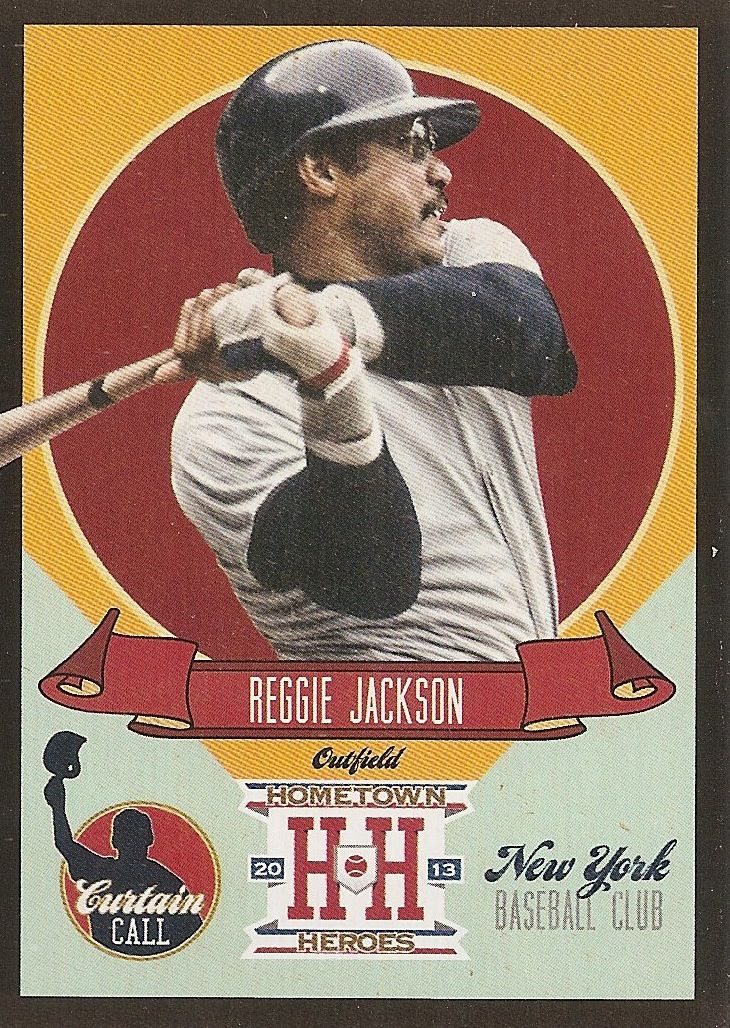 Here's another parallel card, this time black. I pulled multiple black and gold parallel cards from my box, so I have a feeling that neither are very short printed. If it were up to me, I would have made golds easy pulls and have the black versions be ridiculously hard to find. But that's just me. Besides this Curtain Call insert card there are more varieties of inserts to find and enjoy in this product. 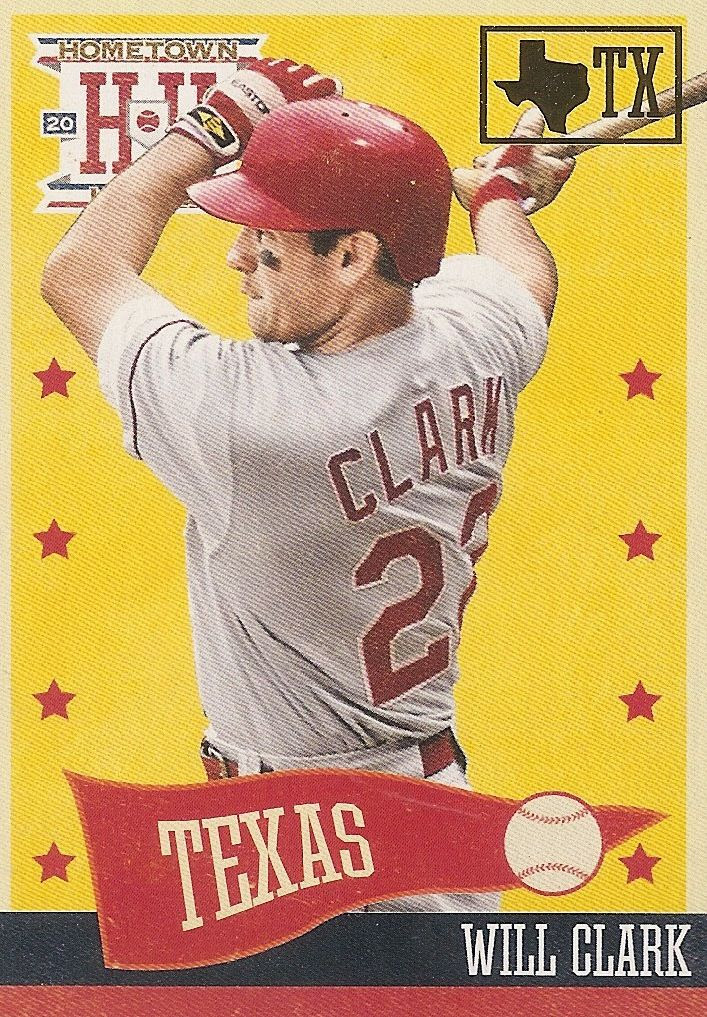 State stamp and zip code stamped cards are parallels to the main base set. It's a pretty cool idea using the state to denote a parallel card. The stamping looks good, and I'm pretty sure it's an idea that has not been done before (please correct me if I'm wrong on that!). Zip code parallels are a bit harder to pull, but not by much. I had 2 in my box. The zip code parallels have a nicer rainbow foil stamp as compared to the standard state stamp. 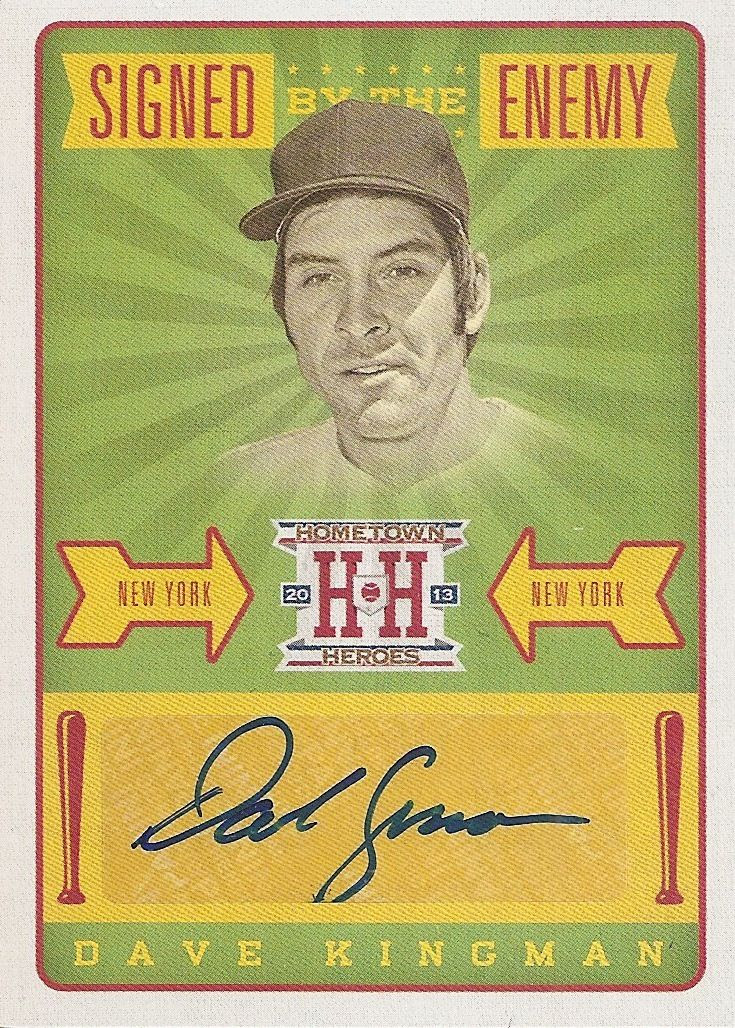 Here's a Signed by the Enemy autographed card of Dave Kingman. This card's theme reminds me a bit of the Rivalry card set. Though the autograph is on-sticker, this card is still very nicely designed. I love the colors used. The retro feel with an autograph on it always gets me! 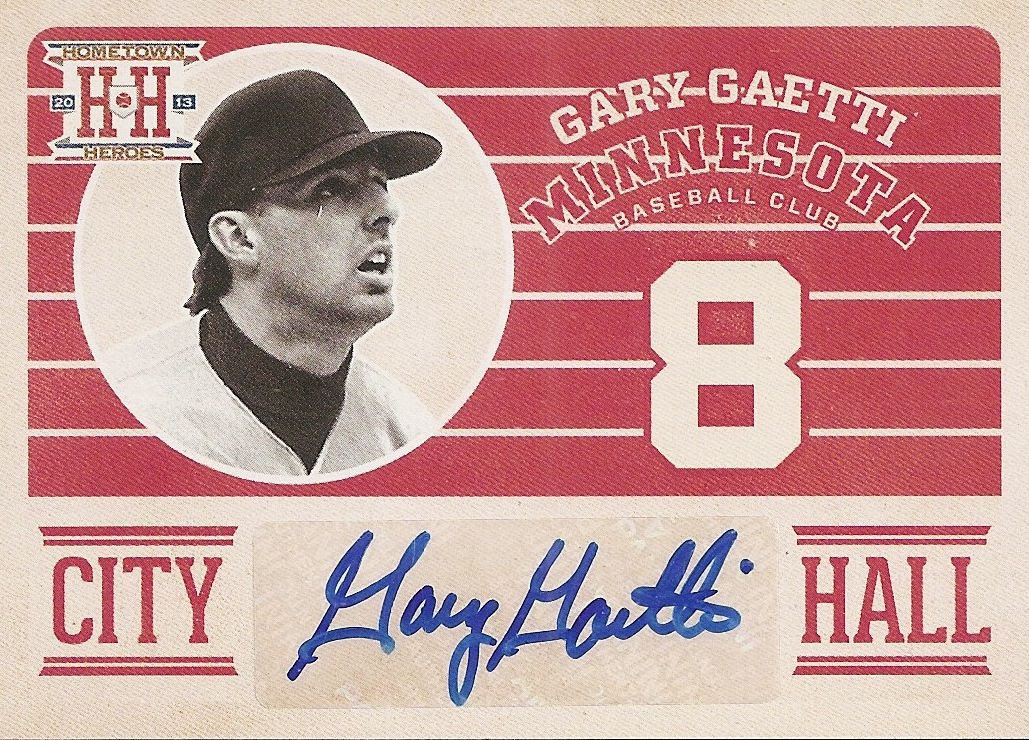 Here's another pretty sweet old school design with an autograph. This autograph card of Gary Gaetti is pretty much 2-toned, with the primary color being red. The blue ink on the autograph really stands out on this card. 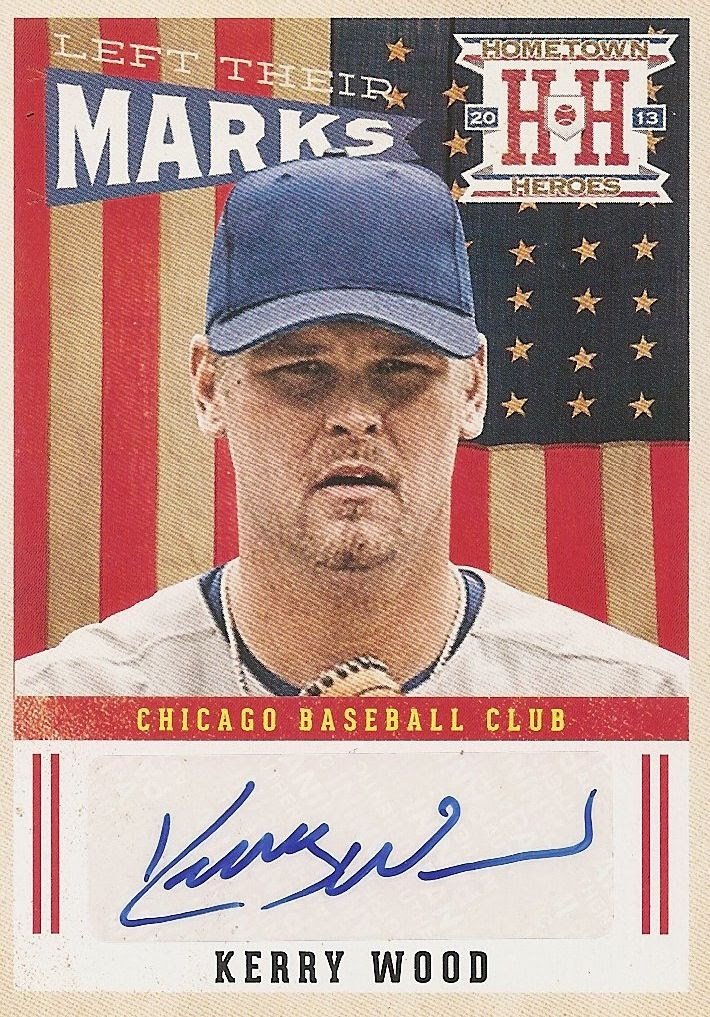 My third and final autograph was of Kerry Wood. Again, I have to compliment the design of these cards. The American flag as a backdrop is always a great idea for a baseball card. The way this card is laid out is just perfect- the placement of the card elements are just right.

Hometown Heroes will give collectors a wide variety of different insert and autographed sets. I'm very interested to see what other fun cards Panini has inserted into this product.

Overall Rating -
Panini has come out with quite a few baseball products lately... and this is one that I've definitely been impressed with. Hometown Heroes does a spectacular job of giving collectors an old school set with just the right amount of autographed hit content.

For collectors like me who enjoy pouring over their cards, this set is perfect. There's just so much to see and spend time looking over. It's one of those sets that just gets me excited about baseball cards.

This set definitely is not for everyone. In this day and age where hits and high dollar cards are the thing, Hometown Heroes is not like that. To me it's an honest set of cards with some sweet themes.

I'm a fan. If you are too, get yourself a box and dig in!


Here's my box of Hometown Heroes: