One of the most solid products released year after year is Upper Deck's Artifacts. This product has consistently given collectors beautiful cards and sweet hits out of hobby boxes. Each hobby box yields ten packs. All boxes contain at least one autographed card, and many boxes will have a patch card to look forward to along with other assorted serial numbered cards. If Artifacts is anything like it has been these past few years, it should be a huge hit once again! 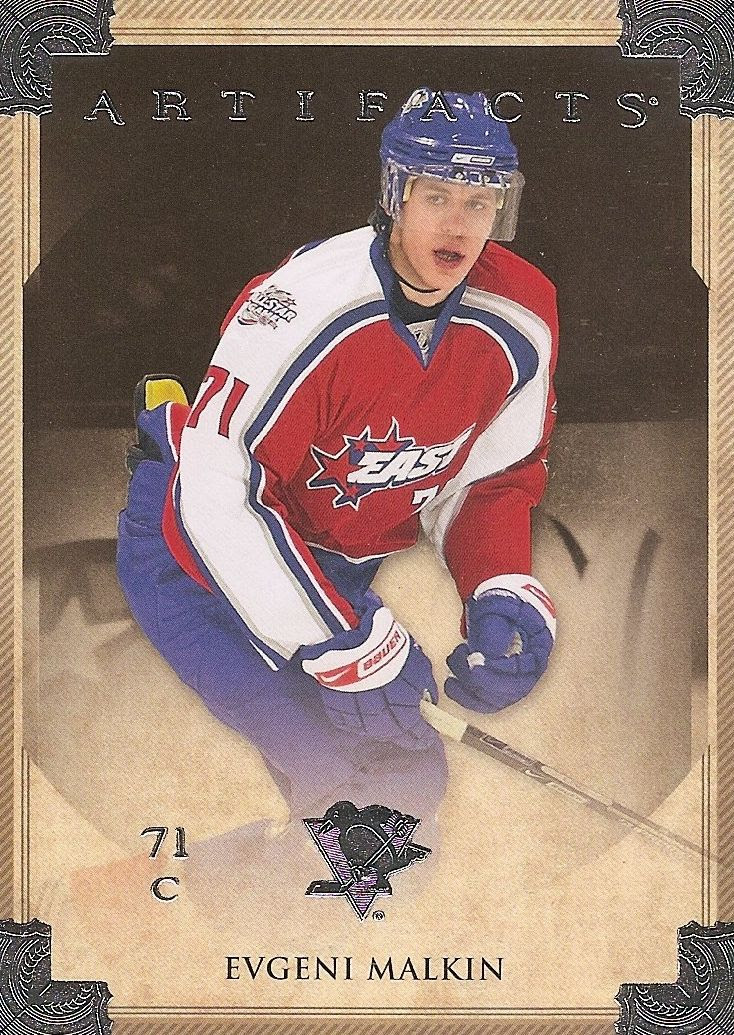 Base Card Design -
The Artifacts base cards get a lot of things right. The designers over at Upper Deck know exactly how to produce a classy looking card. First of all, the base cards do a great job of carrying on the Artifacts look. Even if the product name was somehow missing from the front of the card, you could tell these are Artifacts base. This year's base have a tan, picture frame type motif. Each card is highlighted by silver foil on the corners as well as with the logos. The embossing on the foil is particularly intricate, which is especially impressive. Though it looks as if the player image is simply on an artist designed backing (which was the case with past Artifacts lines), the background design is in fact the actual background of the photo. The result of this are cards that vary in terms of their look - no card has the exact same background. I personally love this slight design change from previous years. It shows that though there are many nice consistencies in Artifacts, it is taking steps of improvement and change as well. The Artifacts base set features NHL players from both the past and the present. I thought it was interesting to feature some players with their All-Star gear on for their primary base card like the Malkin shown above. 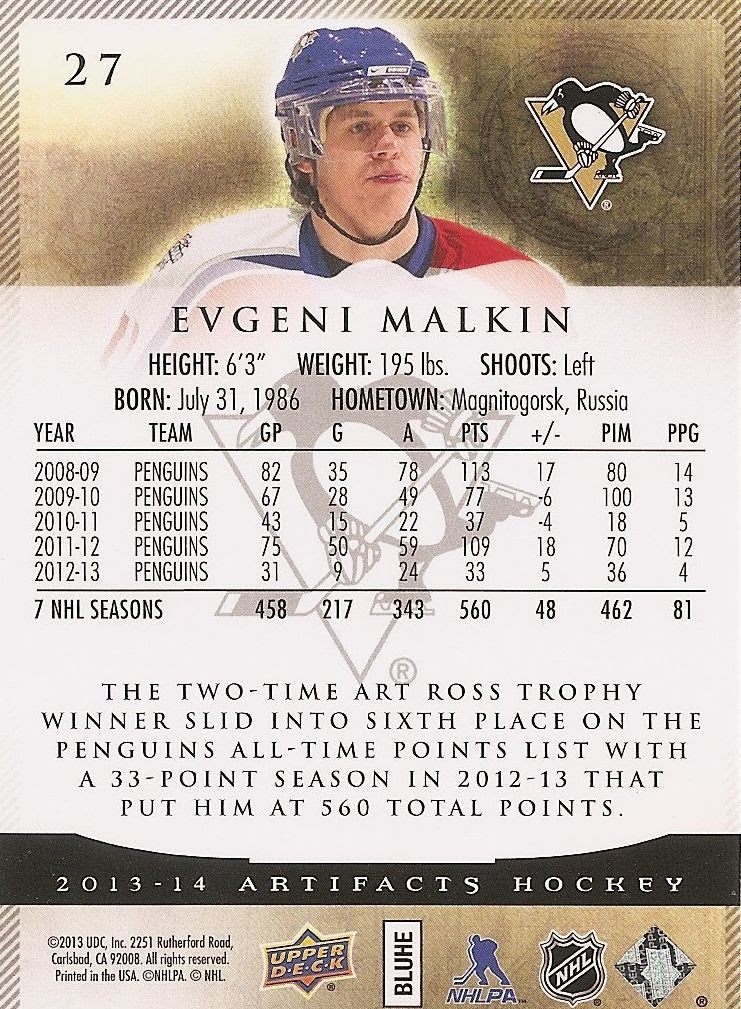 The great design elements continue with the backs of the Artifact base cards. Upper Deck utilizes the space very well as there is very little white space. Aside from the usual stat lines and vitals, each base card has a little write up about the player. One thing of note is the player photo. Many companies will simply use the same image, but cropped, on the back. That's not the case here. Each base card features two unique photos - one on the front and one on the back. 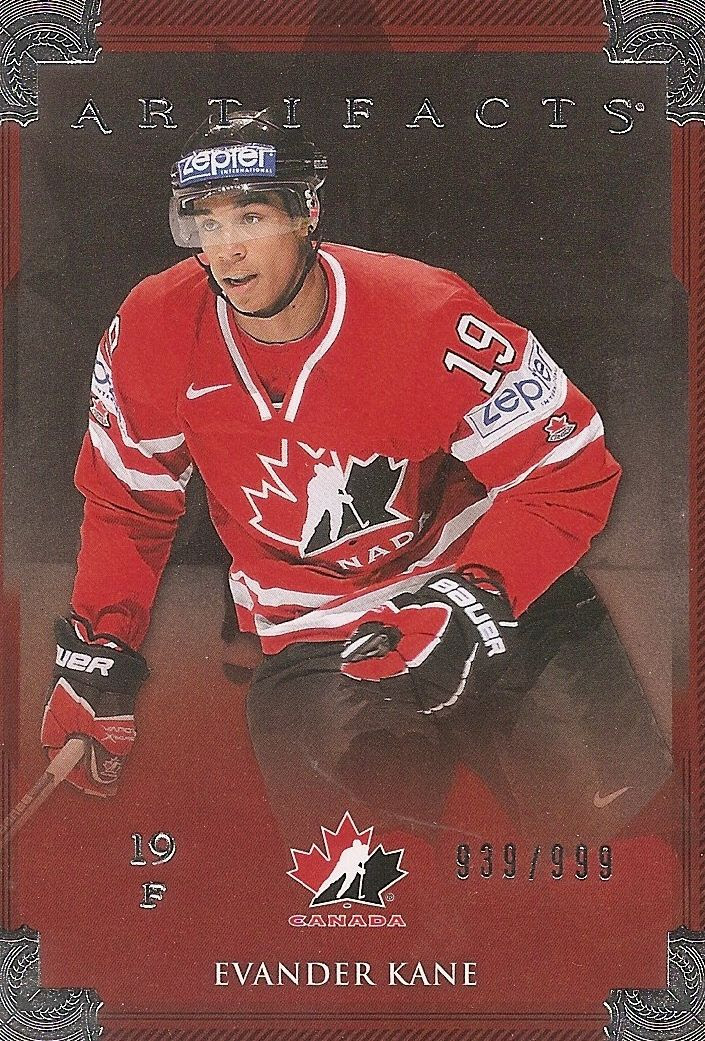 Base Goalies and Base Team Canada cards serial numbered to 999 are subsets that follow the base set as part of the main set. I didn't pull a Base Goalie card, but I did get a Team Canada Evander Kane in my box. These Team Canada cards look very sharp. The deep red color along with the sliver foil is oh-so-awesome! I immediately took a liking to this card once I saw it. I would think that Team Canada collectors would love adding these beauties to their collections. 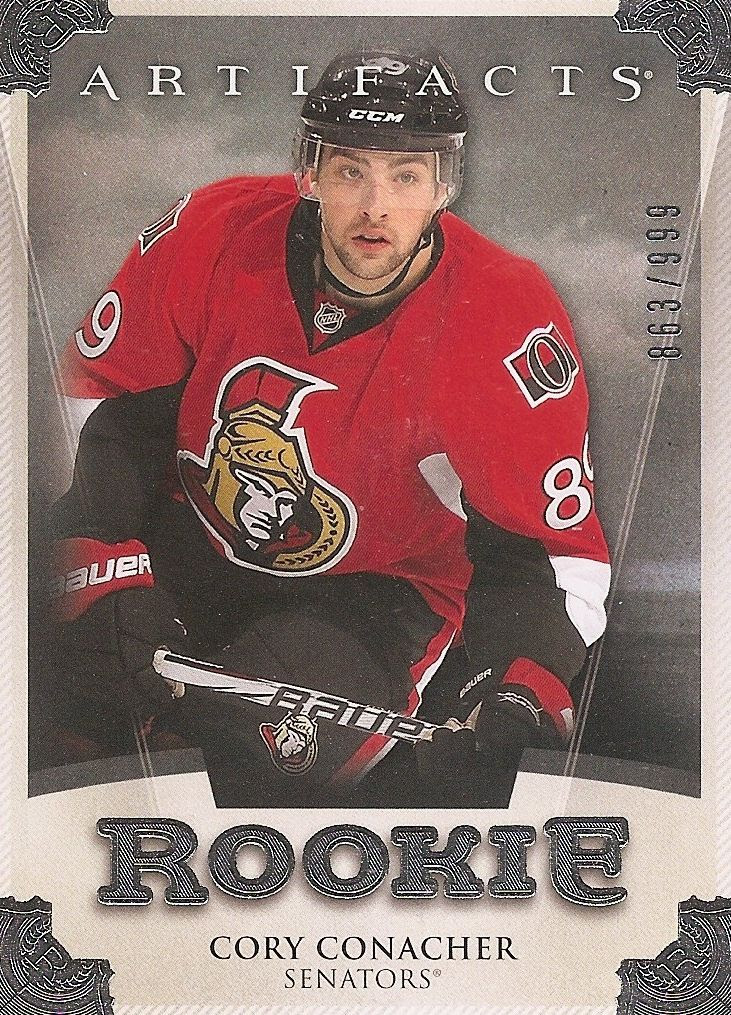 Rounding out the main set of cards are the rookies. As in years past, the rookies have serial numbering. Unlike the standard base cards and Team Canada cards, the rookie cards didn't grab me as much. I think it's because of the very light tan color they used on the card. Somehow, it just doesn't stand up well to the rest of the set... the tan is too soft, so it seems weaker when compared to the bold colors of the other cards. The rookie logo also left me a bit wanting. The font doesn't exude the classiness of the rest of the cards. If anything in Artifacts leaves me a bit disappointed year in and year out, it's the rookie cards. This is definitely one area Artifacts could improve on.

Inserts/Game-Used/Autos -
Hobby boxes of Artifacts will yield three memorabilia hits with one being a dual or triple piece. Collectors will generally find one autographed card as well. Many boxes will have a patch card, but not all. Serial numbered cards and rookie redemptions round out the break. 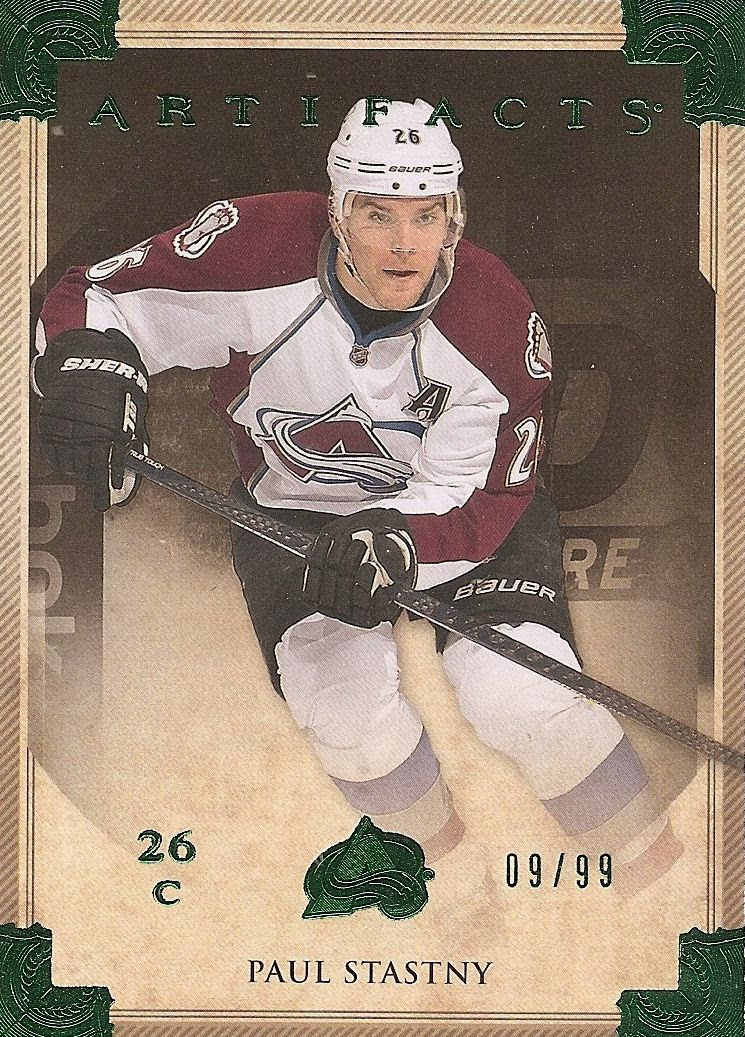 One of the things Artifacts is known for is the parallel nature of the set. There are many variations of the base cards to find. The most basic variation are the different colored foil cards without memorabilia. The general tiering of these from most common to most rare is: ruby, emerald, sapphire, spectrum foil, and black. My box came with an emerald Paul Stastny numbered to 99 (shown above) and a ruby parallel rookie card of Nicklas Jensen numbered to 299. 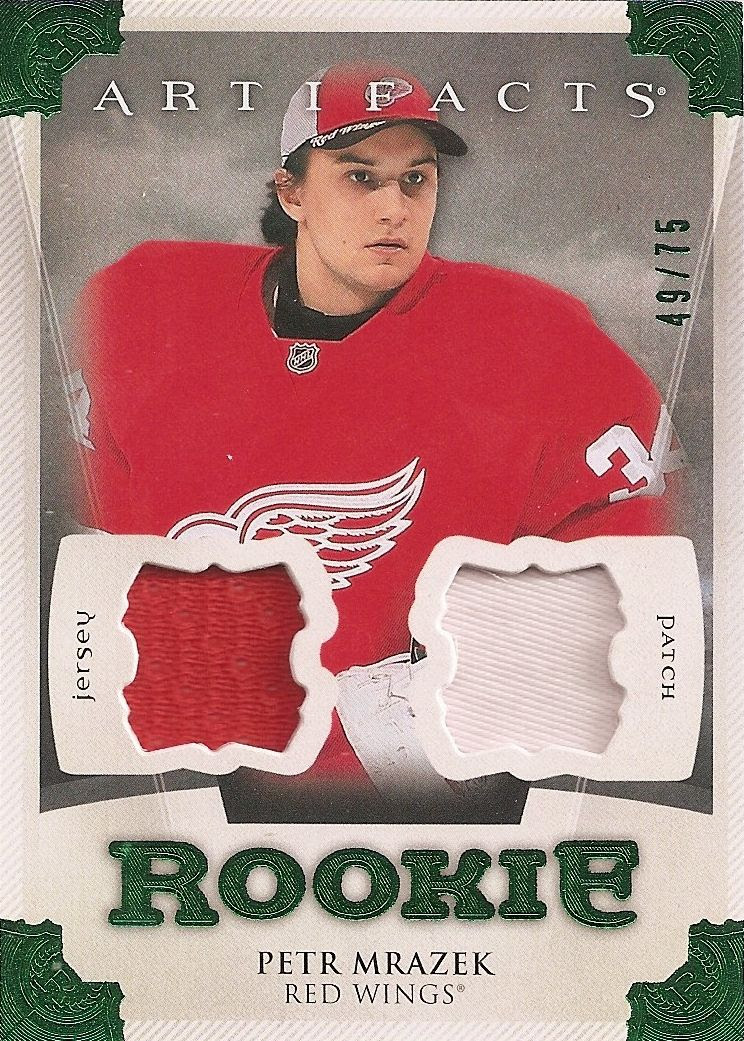 Memorabilia versions of the main set are also very prevalent. These cards will feature jerseys, patches, autographs, tags, and a even a mixing of different materials like the Petr Mrazek I pulled out of my box above. The better the material combination, the lower the numbering. I believe it's these cards that have made collectors really enjoy Artifacts over the years. Trying to complete a player rainbow of all their different parallel variations is quite a fun challenge for many. 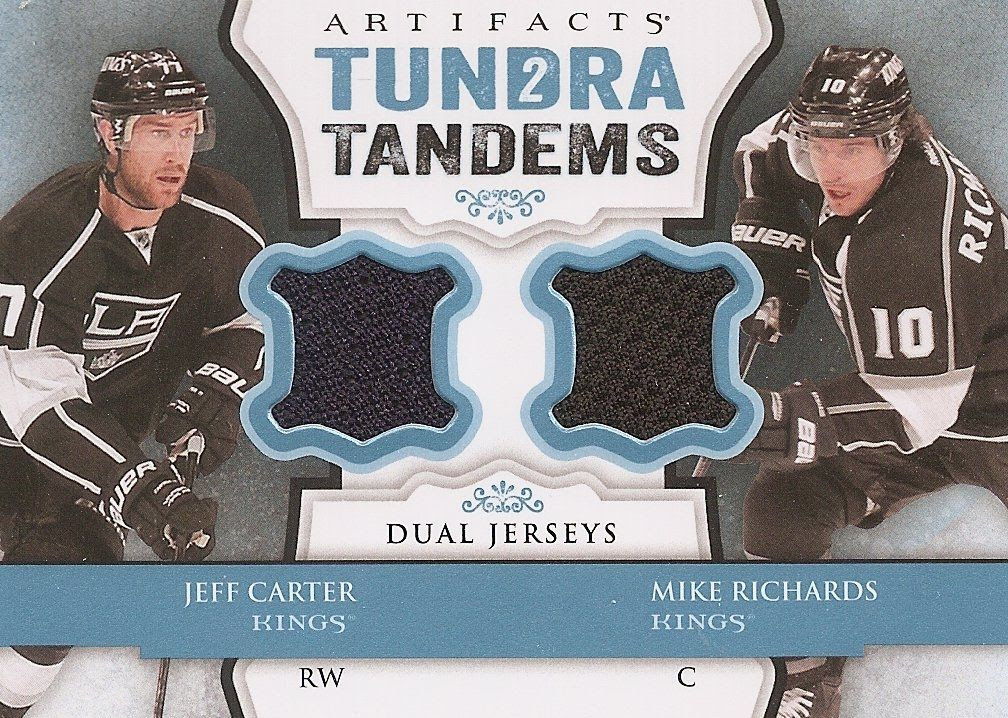 Tundra Tandems and Trios return again. These cards come back with a fresh new look. I have traditionally been pretty indifferent with the Tundra Tandem cards, but I really do like the new look they have this year. The icy-blue color they used on these cards is a big step up. Like with the parallel base cards, these cards also have some very rare parallel variations to find. I know I'll personally be on the look out for a Logan Couture and Patrick Marleau Black Tag 1 of 1! Let me know if you find it! 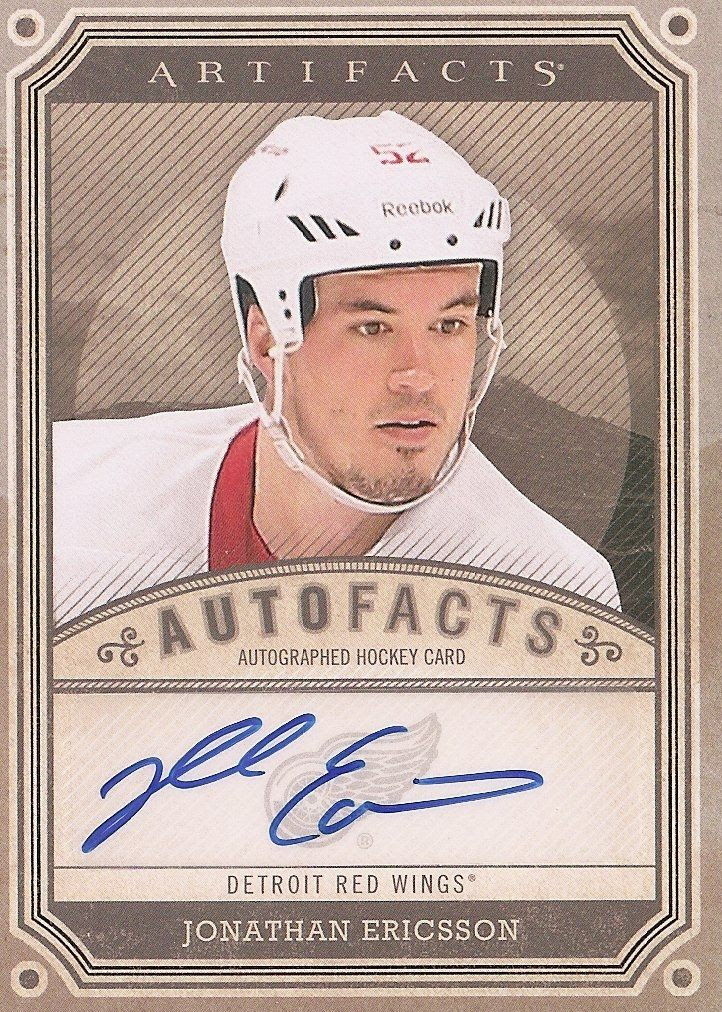 The most common type of autographed card in Artifacts are the Autofacts cards. If you're going to have an Artifacts set, you gotta have Autofacts in it! These cards are sticker autographs with a pleasing design. The color scheme goes very well with the base card design. But to be honest, you don't want to find one these when you buy a box (unless it's like Gretzky, Orr, or someone like that). If your box doesn't have an Autofacts card, it probably means you may have gotten a base variation autograph or one of the new Top 12 Rookie Signature cards (inserted at a rate of 1:1000!). 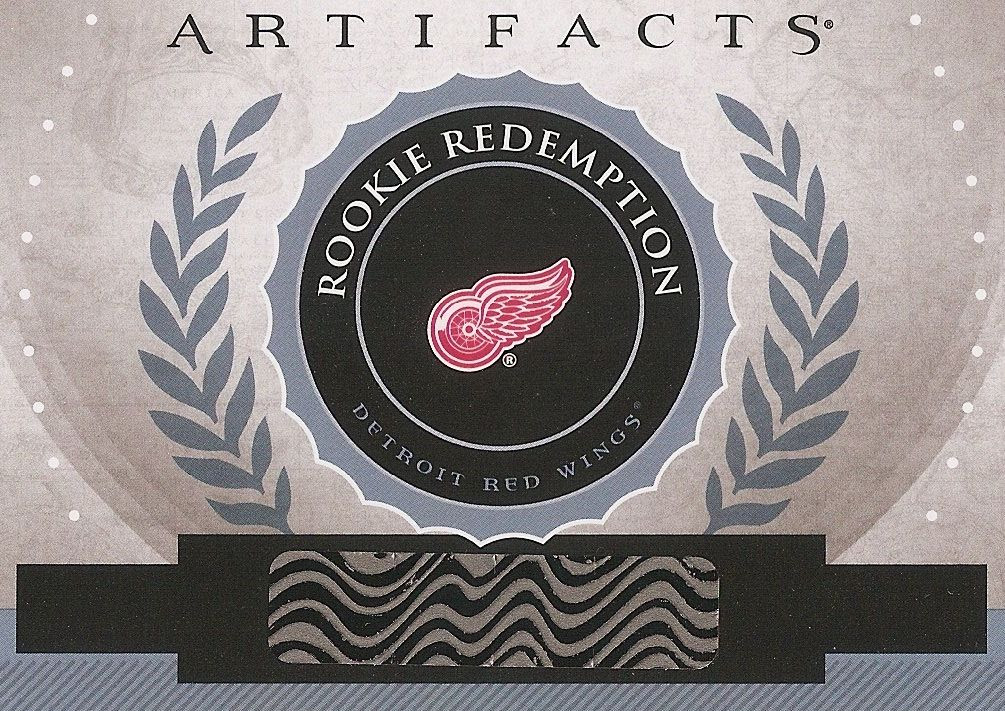 One of the packs in the box will have a Rookie Redemption card. These cards can be redeemed for players who have not stepped on the ice as of Artifact's printing. It's always fun to speculate who the redemption will be for. With this year's double rookie class, it should be particularly exciting!

One box of Artifacts will never give you a good enough sampling of all the content that can be found in Artifacts. This year you will find popular inserts like the Autographed Rookie Redemption cards and new things like memorabilia cards that feature the tape from a player's stick. I am really looking forward to seeing the huge amount of new Artifacts memorabilia cards hitting the market!

Overall Rating -
Collectors know what to expect out of Artifacts... though I have noticed a slight difference between this year's product and past iterations. With the double rookie class in full effect, it looks like the skew between current/veteran players and rookies favors much more rookie content. If this double rookie class pans out, that could be a very good thing for this product. I picked up on this because in looking at the checklist, I noticed some pretty big omissions from the current player selection. My team, the San Jose Sharks, has only one player representative in the base set - Patrick Marleau. That means no Joe Thornton, Logan Couture, or Antti Niemi. Players like Patrick Kane and John Tavares are also noticeably missing! Without base cards, these players also do not have base variations either. Some may have a split card in another memorabilia insert set like the Couture/Marleau I mentioned already... but that's it! Well, that's ok with me, I guess... it will literally save me hundreds of dollars trying to track all those down this year.

Anyways, in my opinion Artifacts is rookie heavy. And like I said, that may be a very good thing. Collectors seem to be abuzz about the new rookie cards, and with Artifact's track record, it looks like this product will be a very successful and popular one once again. I highly recommend getting yourself a box or two! A case even! Or for those strapped for cash... a pack!

Let me know if you hit it big!


Check out my break of Artifacts from D&P Cards in Sacramento, Ca: